Hey, it's me again...power question this time...
I see Mastech power supplies all over Ebay and Amazon; they have very mixed reviews...some love them; others hate them.
Any suggestions on a good variable power supply?
Thanks.

I took your advice on buying LEDs in bulk from Ebay; you saved me a lot of cash!
I checked out your 555 timer vids and had a question about purchasing capacitors.
Ebay has sellers offering a mixed bag of caps; should I buy those, if not I'd appreciate any suggestion where to get them.
Also not to clear on exactly which caps to get for 555. I believe you used a 10uF in the vid; is that what I need?
Thanks!
Click to expand...

I would not buy the mixed bag of capacitors. Unless you are just going to experiment with electronics in the future.

What I used is a 6.3 volt, 10 microfarad capacitor, polarized Electrolytic (a 25V version works too!) Make sure it is polarized. I don't think a non-polarized version will work with the 555.

You can look up digikey and Jameco electronics they will sell you individual parts or a bag of parts.


Zulu said:
Hey, it's me again...power question this time...
I see Mastech power supplies all over Ebay and Amazon; they have very mixed reviews...some love them; others hate them.
Any suggestions on a good variable power supply?
Thanks.
Click to expand...

I think this is the power supply you mentioned:

I had this discussion with ModelmanTom and he purchased this power supply. The last I heard from him is that he loved it. The reviews look good as well.

I would stay away from dirt cheap power supplies. They will not hold their voltage and will not be accurate.

I bought a really old one off of ebay for about the same amount of cash. It is old but still works very well and is probably more accurate than my mulitmeter.

I got my LEDs & they sent resistors with them. The resistors differ from charts I've seen online.
I requested 9v.
Here is what came in the package...

I have been working with 9V with my current build and I am using 390 ohm for red, yellow, orange and 330 ohm for white, blue, green. That is what the on line calculator says.

I think that calculator is a bit conservative. When I do the math by hand, at 9V, I get the resistance is 290 ohms. It is reporting back 330 because that is a common resistor which you can buy almost anywhere. 300 ohms is not common and is hard to find.

I found another site that gives more information: http://www.hebeiltd.com.cn/?p=zz.led.resistor.calculator

If you use too high of a resistor, it will supply the LED with not enough power, making it a bit dimmer and extending it's life. The LED wizard just makes sure you don't burn up your LED's.

Last night I was soldering a 330 ohm resistor to a SMD LED, and when I was done I put it on a 3V power supply. It still lights up, but pretty dim. So too much resistance will work. Not enough will not.

Thanks for helping clear that up!

Glad I could help. One other thing, I use 3.2 for white, blue and green. And 2 for red, yellow and orange. This way I am being conservative and making sure I don't burn anything out.

Grendels said:
Glad I could help. One other thing, I use 3.2 for white, blue and green. And 2 for red, yellow and orange. This way I am being conservative and making sure I don't burn anything out.
Click to expand...

I'm going to switch to your forward voltage numbers to be safe...THANKS!
Also...big congrats on the BSC award!!!

Thanks! I hope to do it again, but this year is looking tight. I am starting to push the deadline on my current build.....

How long do you leave LEDs and/or circuits running on your breadboard before giving the OK to build on perfboard?
Once you go from bread to perf do you allow that to run a long time before installing to model?
Thanks.

Usually 24 hours. If it is going to fail, it should fail in that time. Any miss calculations in resistance should show up in that time.

I usually only prototype on the bread board. I build them up on the perf board, and then let them run for 24 hours. Mainly because I want to see if the heat from soldering has damaged them.

I have done both. The 4060 doesn't get very hot, so putting it inside the model is not a problem. I just did a test run with the 555 and after 10 minutes it was still cool to the touch. So I don't think you will have a problem with putting it in a kit.

Hey Grendel !
Running out of options here. I just put a 555 timer circuit together using a 10 micro farad capacitor, a 1 k resistor on R2 and a 500k potentiometer on R3. For some reason, I'm getting a kinda double blink ; first, it lights up but barely, as if I was not feeding it enough power, and then it goes on full power... changed the capacitor, change the value of the resistors, added a diode to the led, but still, double blink. Check out the video. Any idea why ?
Thanks !
http://youtu.be/MF1g1OE3mvI

I can only think of a couple of things: 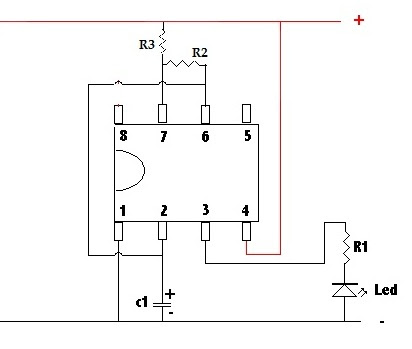 I am not sure of how you wired it up with the video, I can't see the whole circuit clearly.

I checked everything; wiring, polarity, changed the capacitor, changed the led, changed the power supply, even change the chip! The only thing I can't change is the value of the resistors. All I have are 1k (which I use as R3) and 500k potentiometer (which I use for R2). Obviously, when I turn the potentiometer down, I get a very fast flashing rate and the "double flash effect" is not perceptible. At this point, I think the potentiometer might be the problem... not that one potentiometer (I've 50 of them and they all react the same way) but rather the use of that type of potentiometer. I'll do some more tests when I can get some new resistors.
Meanwhile, let me know if you think of something.
As always, thanks!
Cheers

Tomorrow when I have some more time, I will take a look and try to replicate what it is you are doing. I don't have that potentiometer that you do, but I have a different type and do your setup.
H

Grendels, what was it you said in your one video about tools you don't have ? If its a tool you feel you will need and don't have it and will only use five to ten times a year, a trip to Harbor Freight and you'll have it ha ha. Ive became a fan of Harbor Freight since watching some of your videos LOL. ;D

I actually went through all of my tools and purged quite a few that I never use or found to be ineffective.

And yes I have to stay OUT of harbor freight tools. Can't get out of there without buying something....

ohhhh, harbor freight.... you look so beautiful, what's that ? you want to by something ? but of course....
ok, changed the value of every single parts in there: capacitor, R2, R3, LED, chip and I even added a diode.... musk be my wiring then.
I'll try to take pictures or make a video so you can get your eye on it. Looks right to me but, then again I'm a rookie at this...
Cheers!

GOT IT!
I inserted a 0.01 micro farad capacitor between pin 5 and ground and TADAM no more funky double blink !
I'm going to make a few more tests later on next week to see exactly how this double blinking thing can be made (and controlled), after all, it could still be useful in some applications.
Later
Cheers
You must log in or register to reply here.
Share:
Reddit Pinterest Tumblr WhatsApp Email Link