Thanks for the encouragement, guys! Now, I may be pushing my luck here... 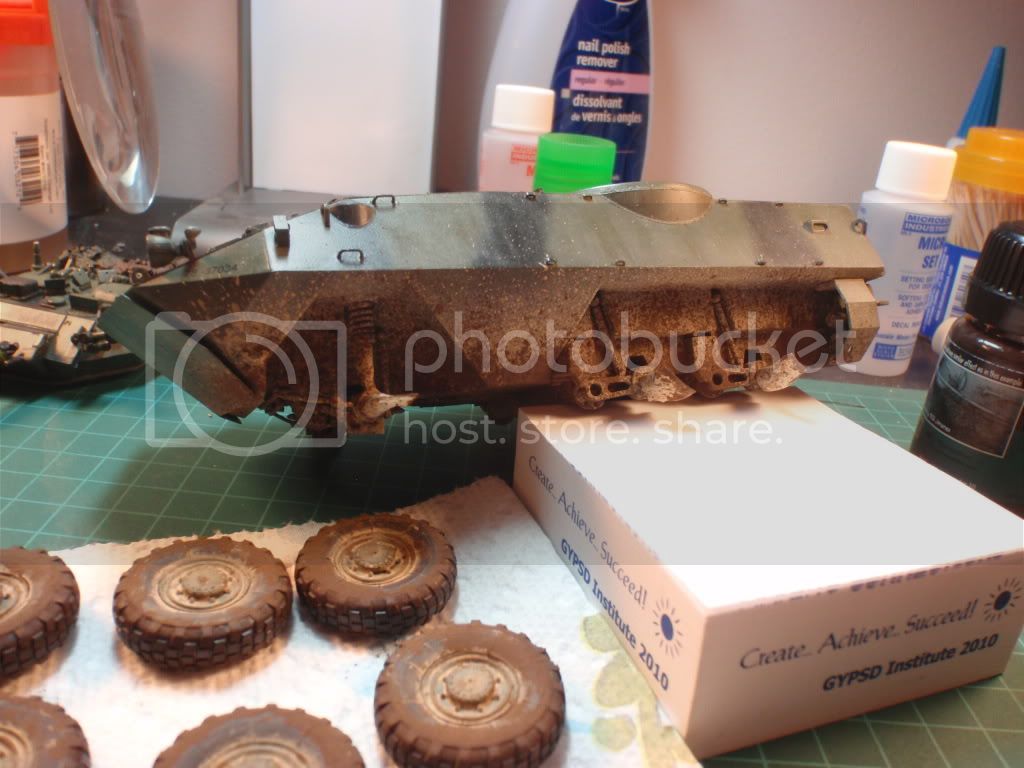 AK Fresh Mud and a little more plaster of paris, sprayed on the hull and brushed on the wheels. Drip marks in the wheel wells will soon follow when everything's cured. Should I sand the tread on the wheels again, or leave them with the wet mud look? And Beobachtstunginkriegenrer, I WILL be making one or two leaky wheel hubs once the plaster's hardened.

when you think you have over done it then stop! but can you ever really over do it? these things get realy dirty so look at the splashes and if they look wrong just remove them with some white spirit.

I dunno about too much dust. If it's that wet and muddy outside, I doubt that there's be that much dust on the road or in the field. That being said, I've got an idea where I gently blow a little dust on the wet spots and diesel stains on the back of the vehicle...
http://upload.wikimedia.org/wikipedia/commons/e/ed/Canadian_AVGP_rear_q.jpg
You can see some of that effect on the left rear hatch here. I'll be doing some of that around the fuel cap on the top-rear of the AFV too. It's not really a pure oil/water stain. On the surface, it's got a fine dusting of dirt on top of the stain itself. Meh, we'll see how it works out!

do you have the AK fuel Stains that will help
N

Nope... out of stock when I ordered. I'm thinking mostly black + a little brown + Future or Klean for an acrylic, or black + brown + turpenoid if i decide on oils. I'll figure something out. I'm leaning towards acrylic for the most immediate & fast-drying results, with a quick light tapping of light dust pigment on top before it dries. I think that acrylic based wash/paint will help adhere and lock in the pigment better than an oil based wash/paint. Besides, end of the build is only a few days away, after all! ;D

Hub leaks on a Cougar?

Sooo close to the end, I can taste it! Then back to the rather neglected Harrier. 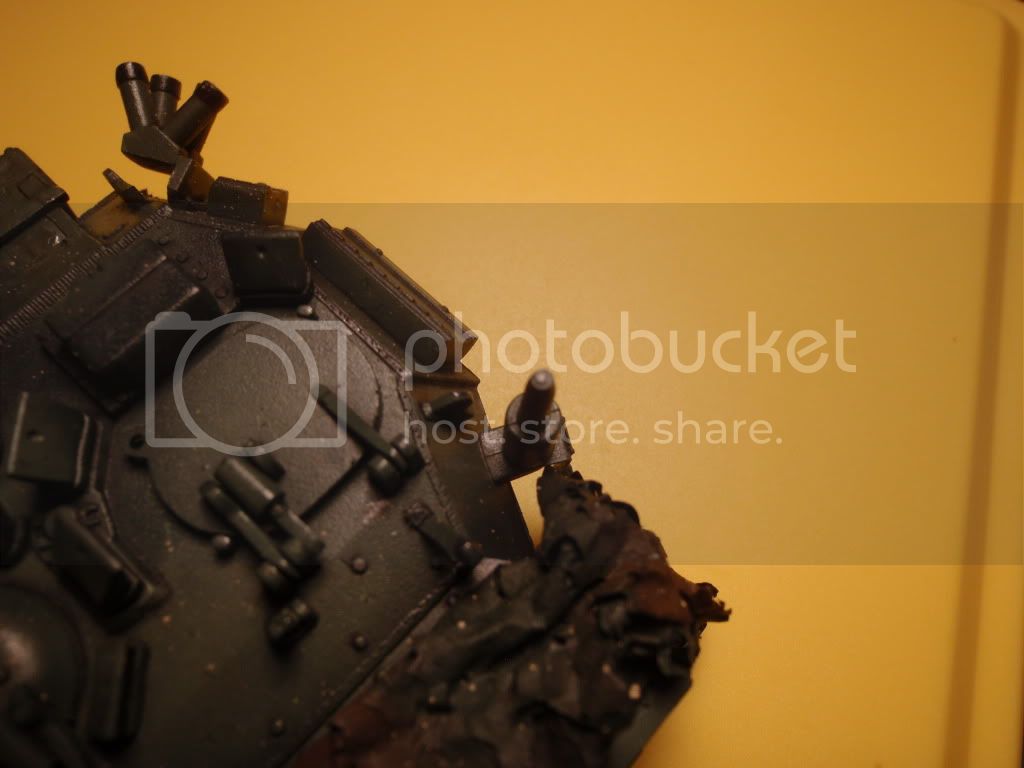 I CA'ed the stretched sprue antenna I made (with safety end) into the base here. I also CA'ed onto it a scratched PE tie-down clip for the antenna itself: 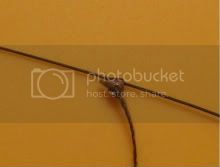 ... and the antenna broke off of the base. It wasn't bending the way I had hoped anyways. I'm going to try using some guitar D string instead. My plan is (prepare for an ASCII code diagram)...

... to unwind most of the string winding for the antenna. I'll unwind a little extra to try and recreate that characteristic bulge in the spring mount (with some fine florist wire?), then re-wrap the winding around that spot, with a little CA reinforcement. I'll also be putting in the bend at the spring part to simulate that bend commonly seen on AFV antennae. The extra wire at the base will serve as a pin into the antenna base.

Sooo.... any chance of loosening the CA grip that my cool little antenna tie-down clip has on the stretched sprue antenna? If not, no biggie. I have no de-bonding agents, only some CA kicker. I also have some turpenoid, mineral spirits, acetone, rubbing alcohol, and access to methanol, benzene, various acids, and any other organic solvents you'd find in a high school chemistry/biology lab. Being a high school science teacher has its benefits!
N 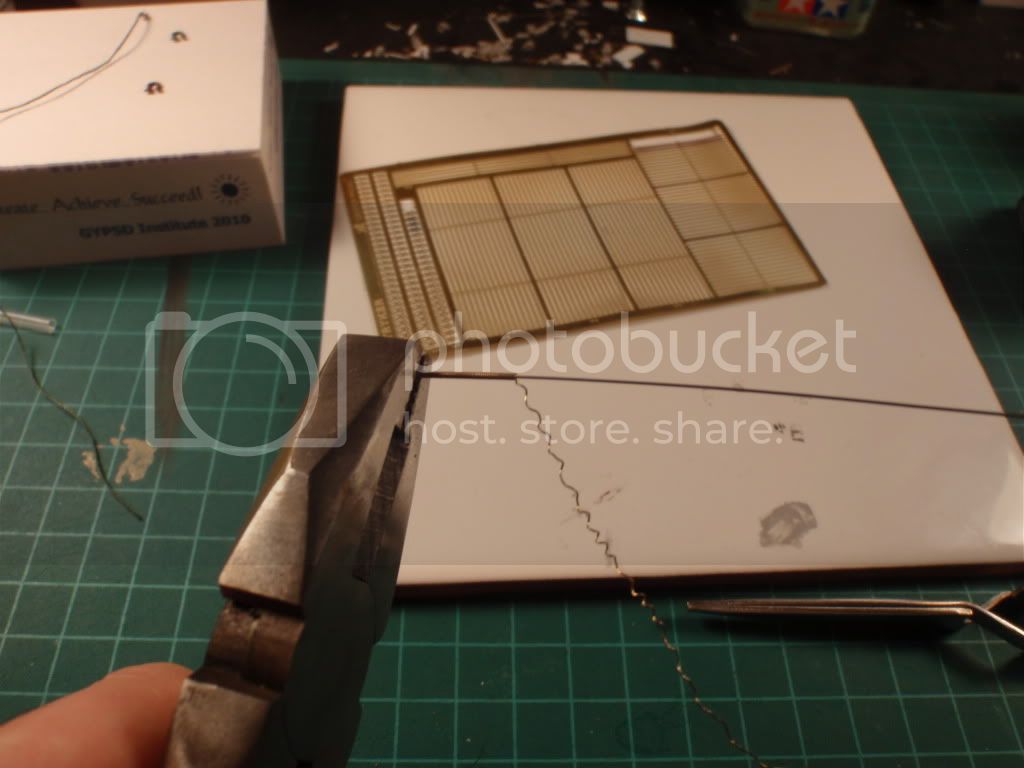 I took a D string from an old acoustic guitar and unwound the string windings almost all the way to the base. 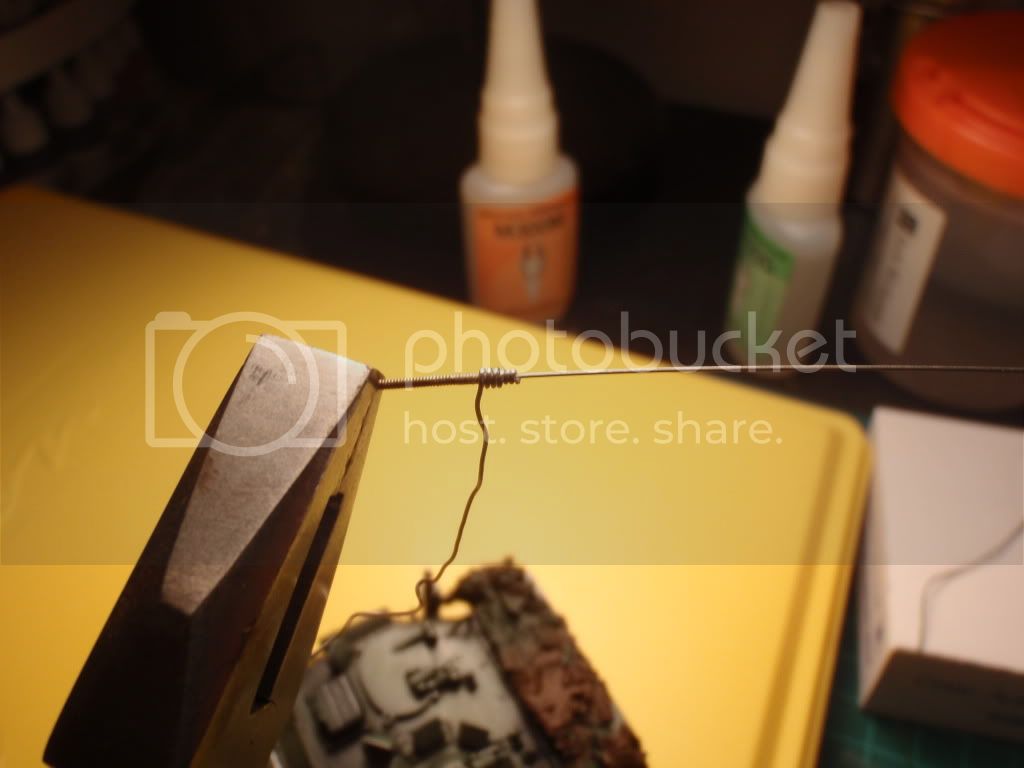 I snipped off the excess guitar windings, and then wrapped the area just before and on top of the leftover guitar windings on the string with florist wire. This creates the waist bulge on the antenna base spring. It gets a drop of thin CA to fix everything in place. 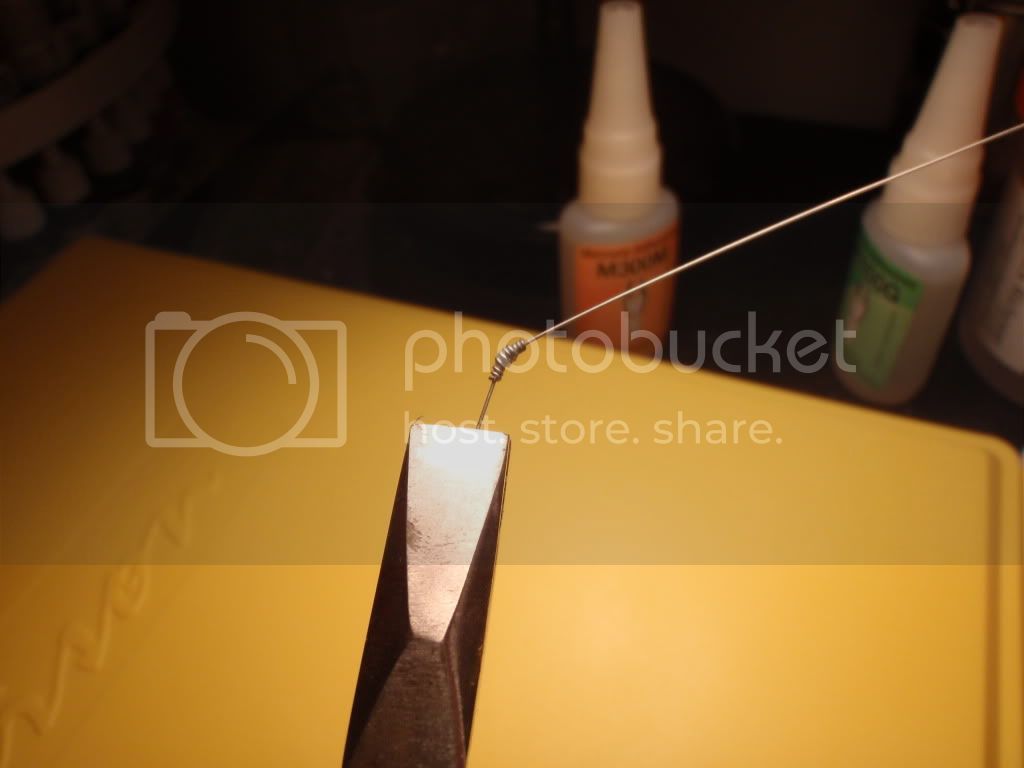 I then unwound the guitar windings from the other side, all the way up to where I left off with the florist wire. The winding got snipped off, and the florist wire gets wrapped over the exposed guitar string to finish the antenna base spring. Another drop of thin CA to fix the new wire wrap in place, and a bend to give the new spring its bent-over look. My new antenna even has a nice, big, strong pin to fix it into the AMU. Rock solid! ;D 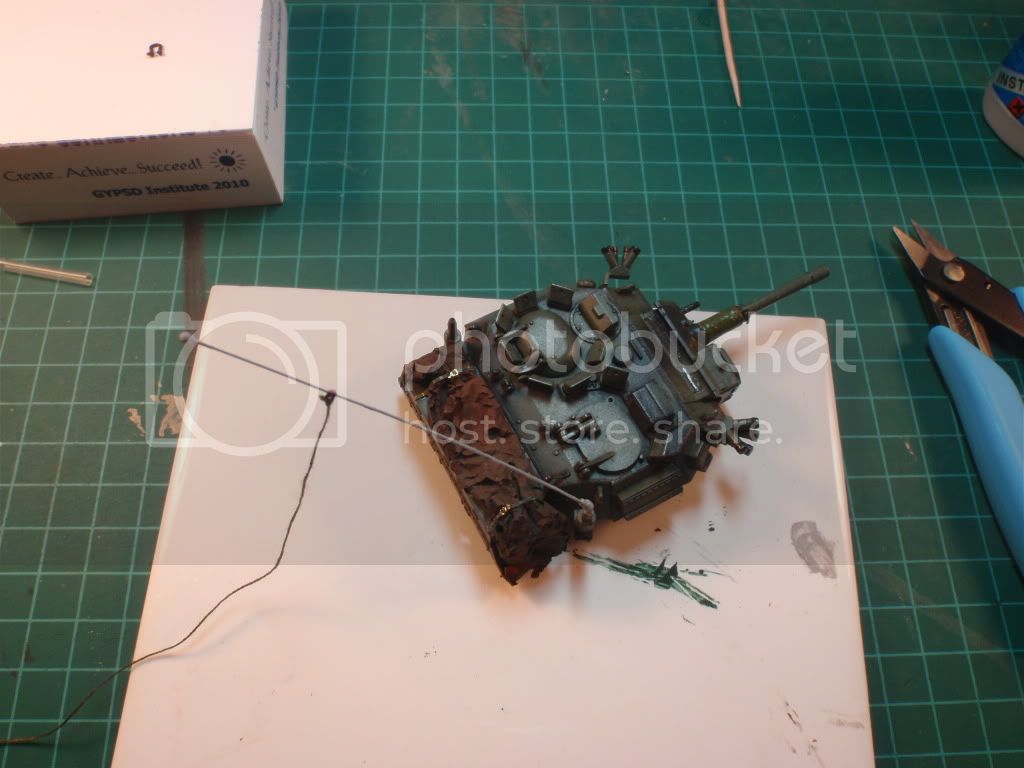 Here it is dry-fitted into the AMU, along with the freed PE tie-down clip. I made another safety tip with CA and kicker, and put a few coats of surface primer on it. I also gave the camo net a quick dusting with brown pigment, and threw on the PE straps too.

Tomorrow will be final assembly of all these bits, final painting and touch-ups, and some dust pigmenting. Weather permitting, I should be able to take some outdoor beauty shots of it and upload them on Wednesday night. 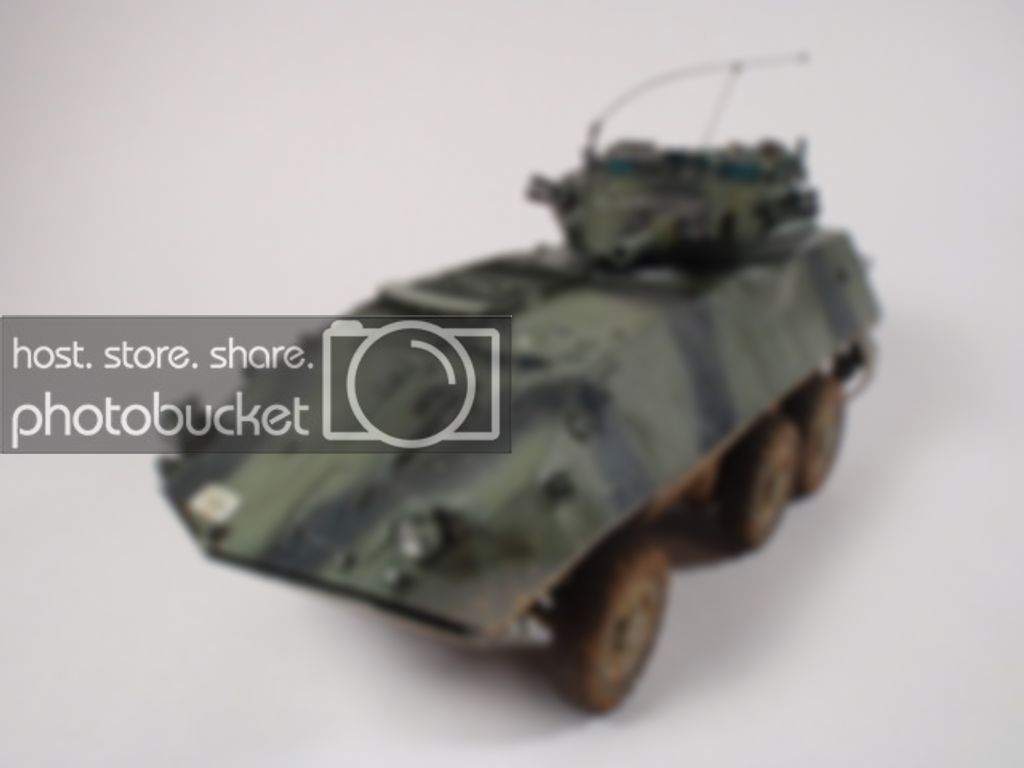 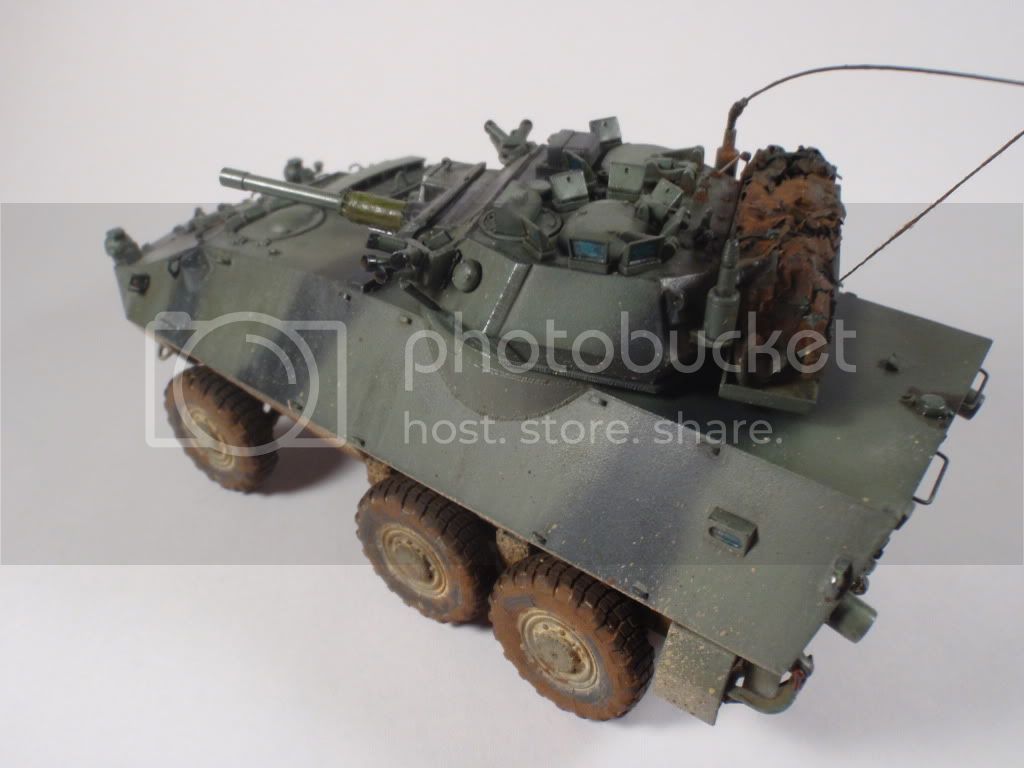 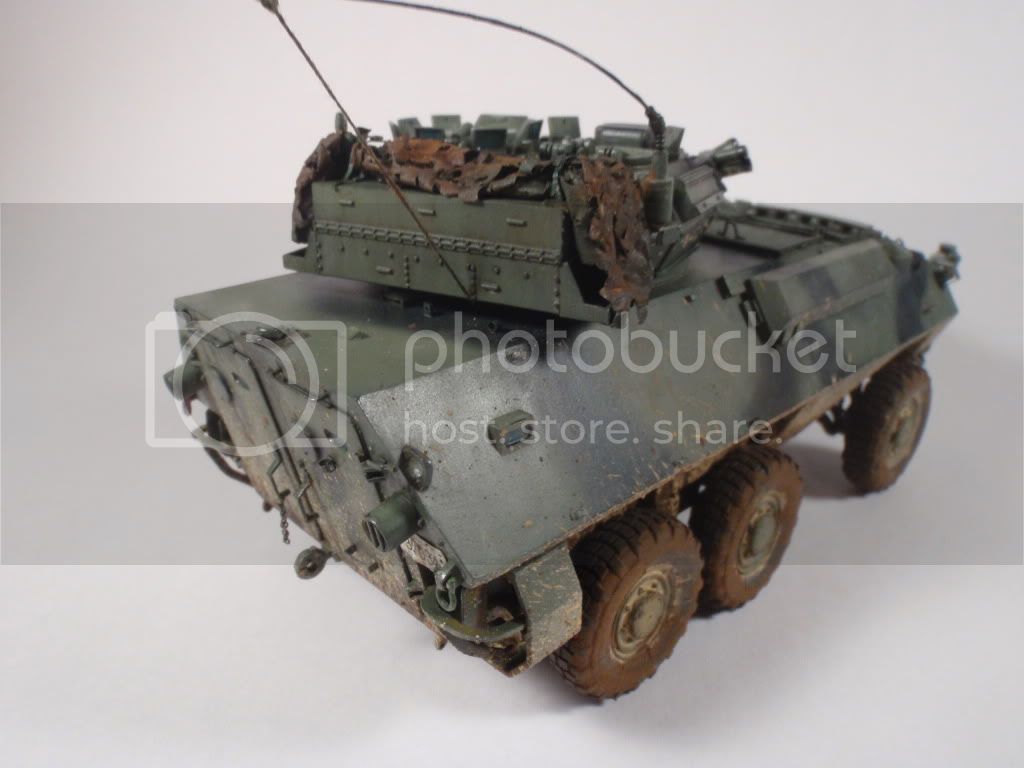 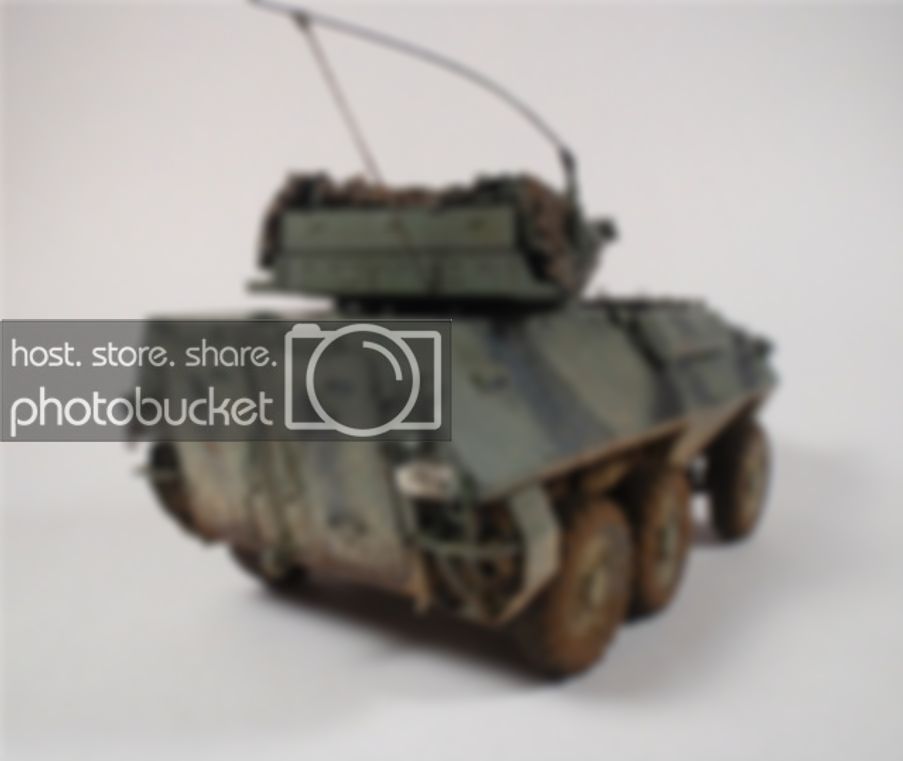 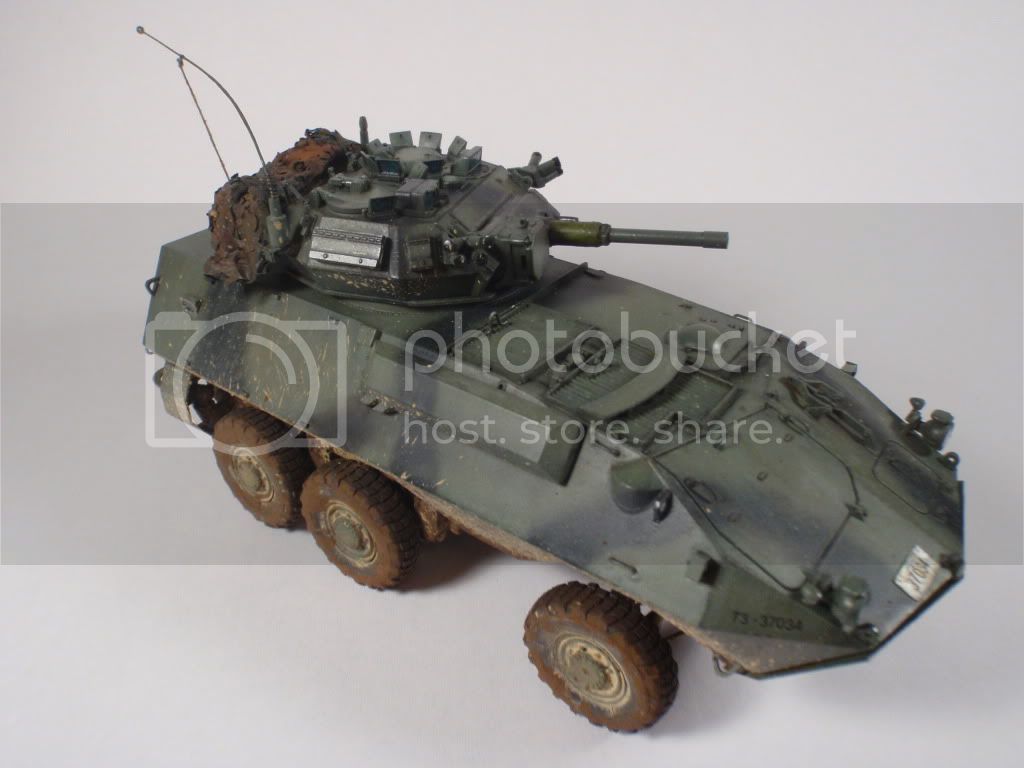 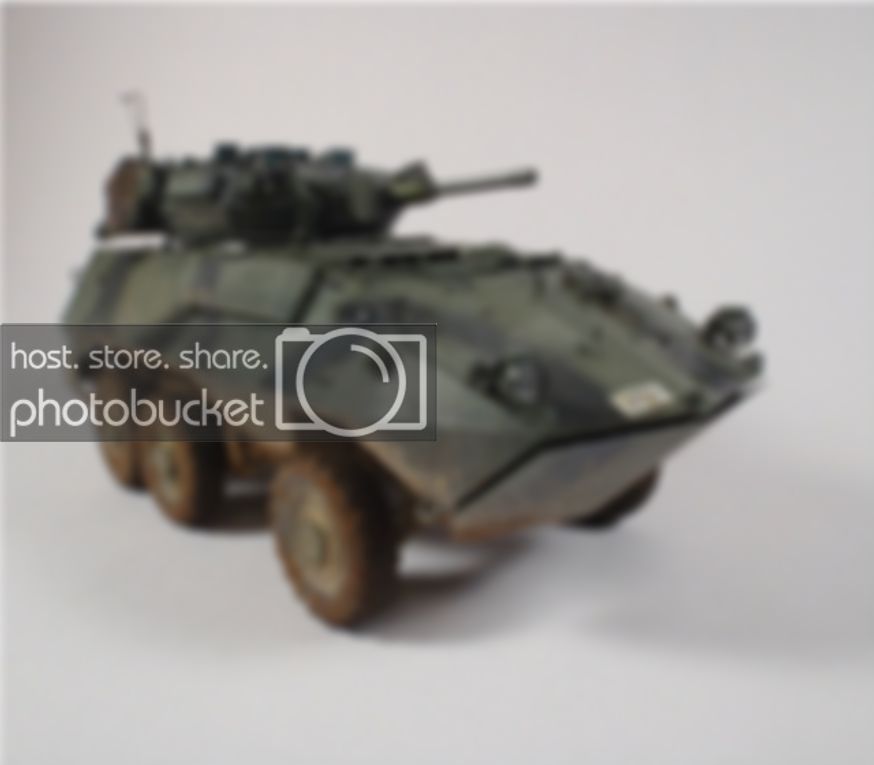 Thanks to everyone who helped out on my first foray back into modeling in over 13-odd years. You were ALL a huge help! ;D ;D ;D