Admiral Graf Spee from Contest to the Finish

Hi, guys!
Here I will be continue to refine my AGS build!
C/U soon!
Guido

looking forward to this!!

metal up your ass

looking forward to seeing this one my friend

Hi, guys!
Thank you very much for your warm welcome.
So this is my first blog in a regular forum here at SMA. You addicts need to be commended for the friendly atmosphere you have created for yourselves. Keep it this way!

Ok coming to my project here.
Some of you may have checked up more or less frequently the progress reports and videos I had posted in the BSC'13. As I had mentioned there already, calling my build done was quite difficult given the conditions of the contest. For example: No seascape!? A ship with no water around? That ain't right, IMHO! But Scott's house, Scott's rules. In the end it worked out in my favour, as I probably would'nt have come anywhere near a presentable result as we reached the finishing line. Not even that. Without the lucky addtion of another week I would have had nothing more than a nice colletion of sub-assemblies ready, even without adding a water display, rigging, a scratch-built recon plane, and crew. So much for bit'n off more than one can chew! That's me!

I plan to make a couple of videos as I go along and will post stills for better resolution and visibility. Some of the stuff I'll be doing will probably not even show on the video like the rigging. I did a workshop on rigging at a show once and even the guys in the first row didn't see squat. I'll try my best anyway.

I will be glad to answer each and every question you may have. The Answer to the Ultimate Question of Life, the Universe, and Everything is "42", by the way and my towel is hanging right here off the back of my chair.
I am glad we got that off the table this early.
Serioulsy, I'll be happy to discuss everything with you about the model and techniques. You'll see that I am always talking too much, anyway.

To start with here is, what the model looks like now. 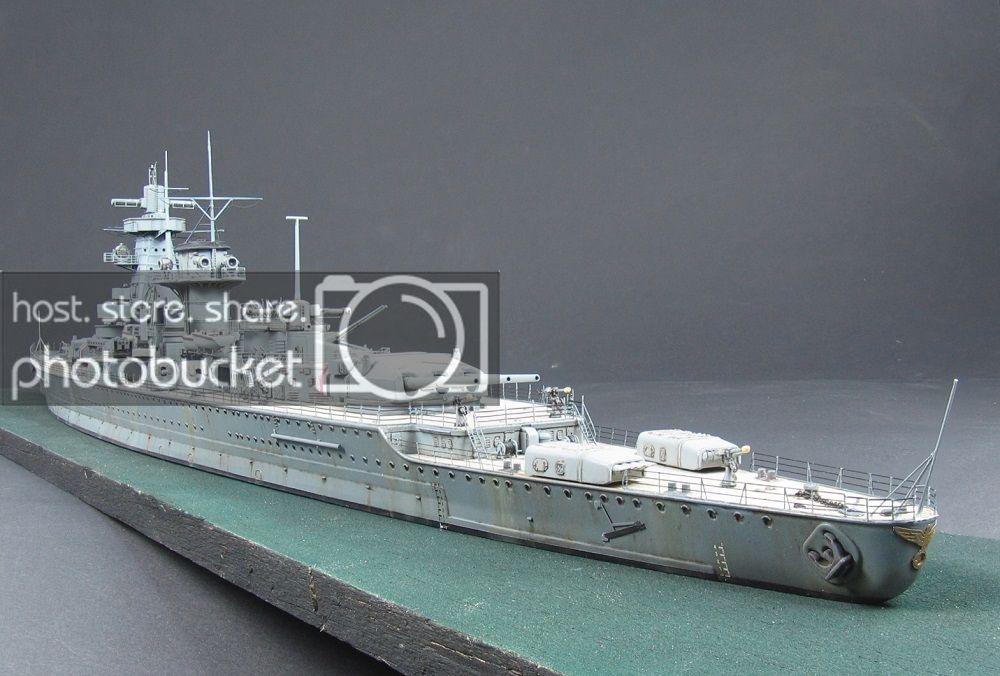 The center section, which is in need of the rigging looks like this close up: 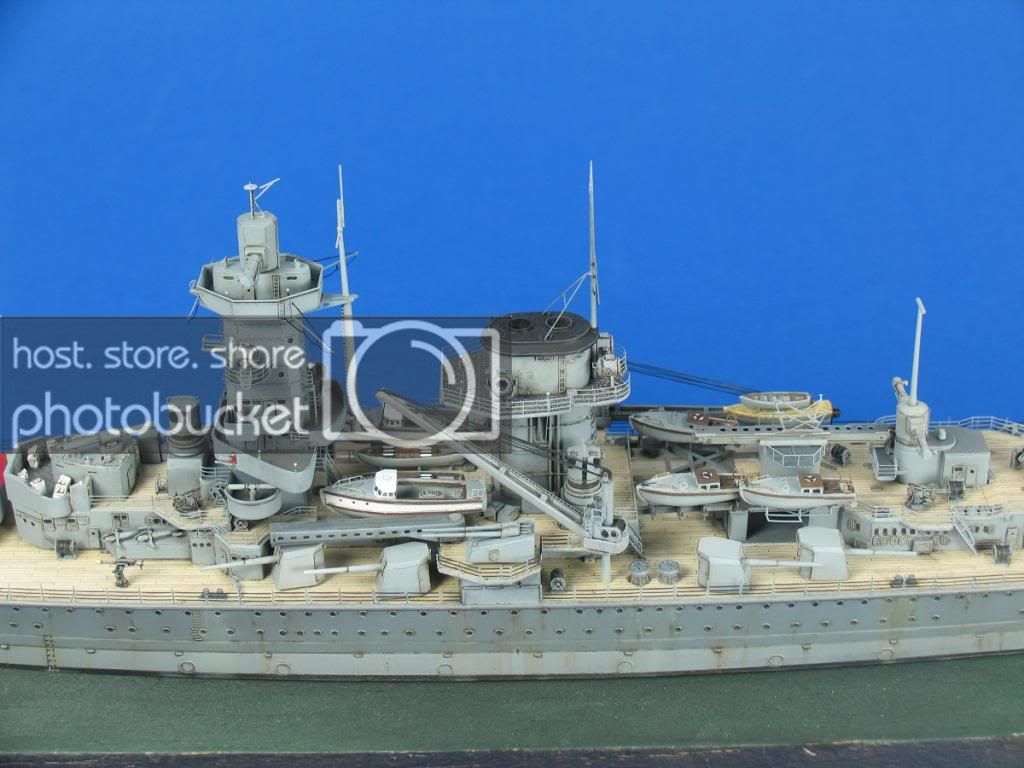 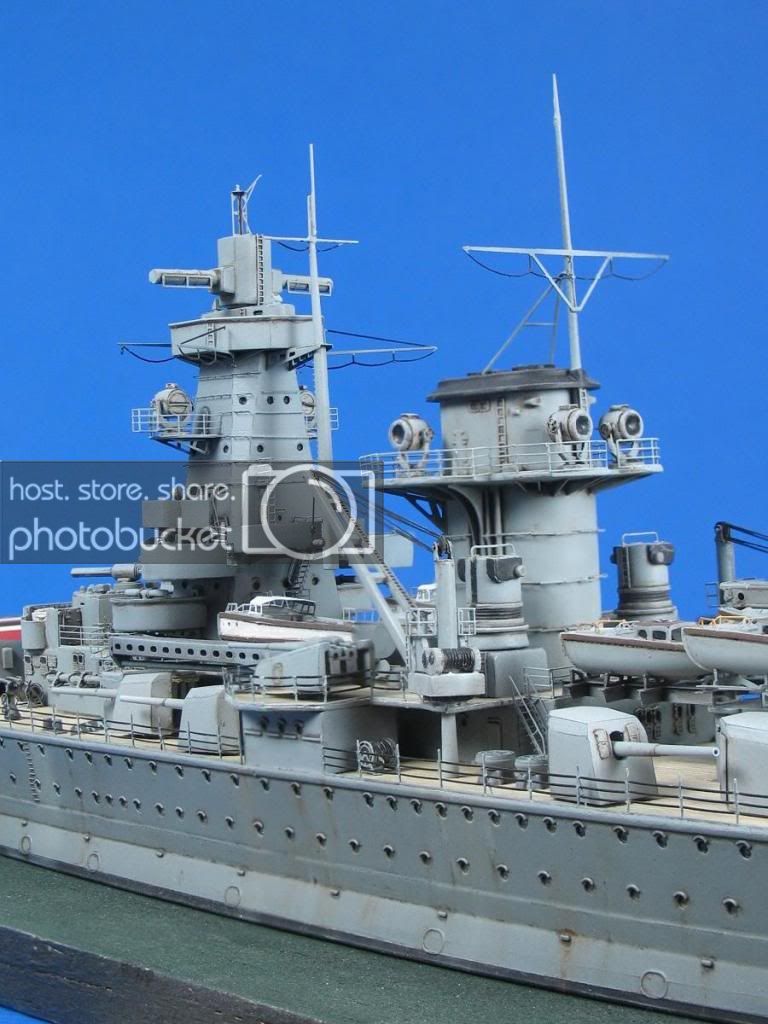 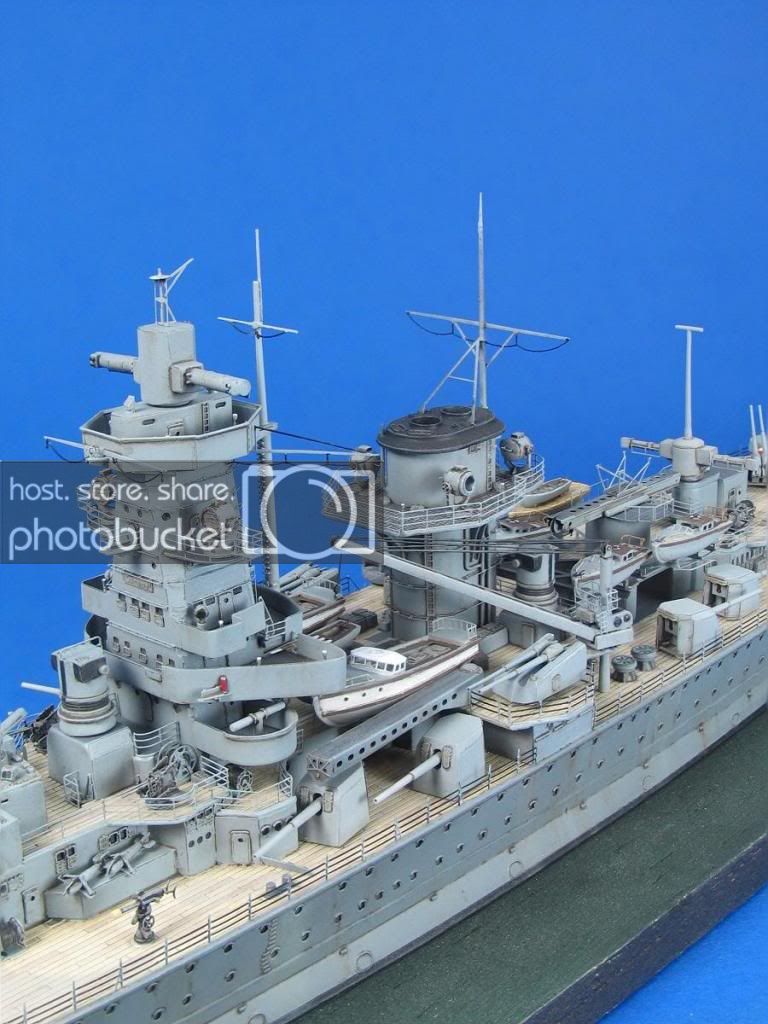 You can see that the recon plane is missing. The kit supplies an Arado floatplane, but that does not comply with the retrofit I had applied to the kit. What I need is an He 60 recon floatplane. That will be based on the Arado fuselage, but will otherwise be scratch-built.

Ok that's it for today. I'll be posting as soon as I got somthing to show for.

Guido, She is beautiful my friend

you have done such an amazing job

and I have to agree with you with the atmosphere, SMA has probably the most friendly and welcoming group modelers online it makes it such a pleasure to share our work with such nice and supportive people !

ANOTHER TANK BITES THE DUST

Looks so realistic. can't wait to see the the plane ;D

Thanks you for your kind words.
Here's the latest progress report: 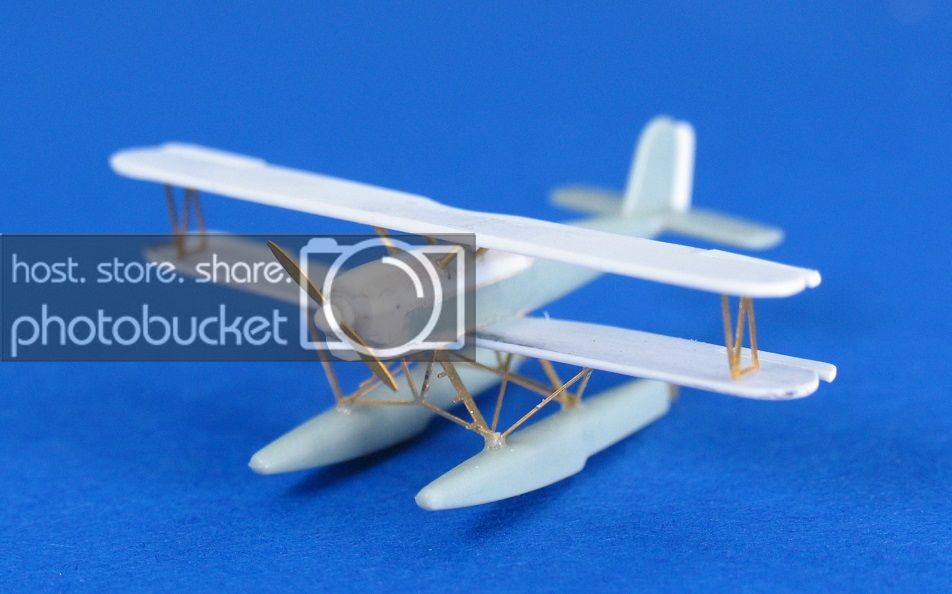 Here is an update from just before my arm was put into a cast due to an infection on the elbow.

My arm is now free again and I have started the seascape. I'll be back with another update this weekend.

Here is a bit of a lengthy update. Grab a beer, have a seat...

Looking good so far. The above picture is a great angle and actually makes the model look like a bigger scale.

Hello Tailor, Amazing job! Watched those videos you posted on my topic, thank you very much! and I was also wondering how you painted your battle ship's port holes?

Hope all is well!

I understand that you have already completed this ship, but I was browsing through You tube, after watching your videos and I found this excellent documentary on The Graf Spee, I think its worth watching the captain was truly a Great Man, as much as I love modeling Battle Ships I still feel War is a terrible thing

Thanks for the feedback. The history of the AGS is indeed most interesting and Hans Landsdorf is one of the few German war heros pretty much untained by the Nazis.
The portholes were filled with dark wash. That's all.
That next video is in the making: Lot's of drying times now, so the progress is slow. the nextinstallation should be online on Sunday, I guess. Thanks for your patience!

the build thread that keeps on giving.

... just follow the next one.
I hope to complete the project by 24th. Then I'll have a 2-week vacation abroad. Then a number of smaller projects will follow and - of cause - I'll be posting vids of these. That's the beauty of this hobby: It never really stops! 8)
Cheers adn Thx for following!
Guido