that is going to look cool when its done

Another big kit. You Americans clearly have size issues

I am hoping I can order a replacement decal sheet. 1) Got ahead of myself, and didn't paint it first 2) they are not set in the correct spot...... Gull Darn It...... Any help, on getting replacement decals, would be greatly appreciated.

​
I am going to do this, with an open Bombay, in flight, ready to attack, since I plan to hang it from my ceiling.

thank you for the complement, I have to remove the decals, and paint that area. I am hoping to be able to get replacement decal sheet.

The build continues... Unfortunately, I had to remove the decals on the instrument panels, because, I forgot to paint first, and I am not able to get replacement, unless I buy another kit 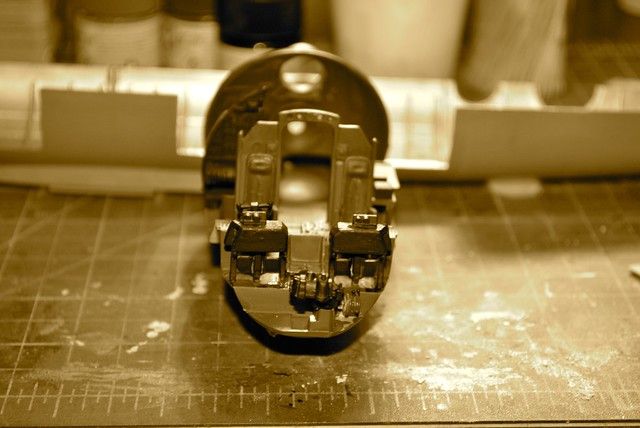 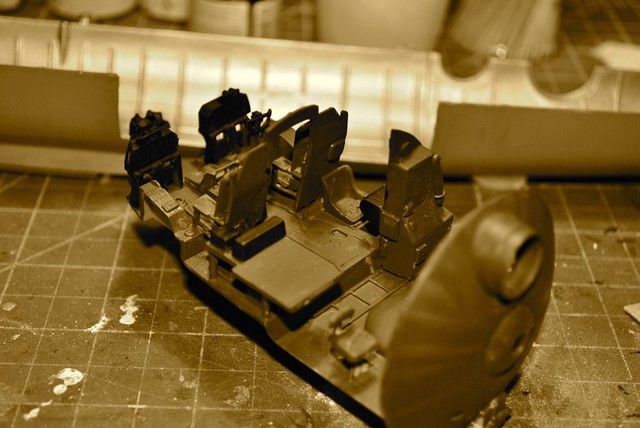 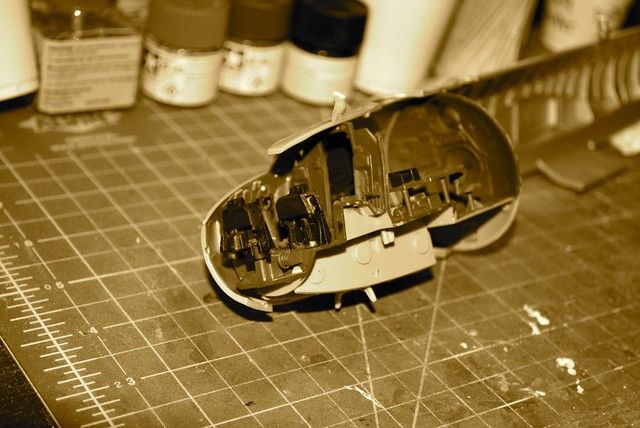 Everyone's builds are looking great, and I have been enjoying looking!

Getting caught up now on your build, congratulations on your choice! I built this when I was in high school, maybe 1980 or '81, it was an impressive kit then, and it still is today. You're off to a good start.

You mentioned raised panel lines, and be aware that the subject is debated, sometimes fiercly.

Neo is correct, back in the day, all kits pretty much had raised panel lines. I don't recall if it was easier to reproduce panel lines that way--maybe it was, when engraving the mold halves--but they were common in the 60s and 70s.

Many builders chose to sand off the raised lines, in those days, and scribe the panel lines themselves.

In the 80s, as modelers who built in the 60s and 70s were older and more sophisticated, let's say, demand grew for kits with engraved panel lines. More and more manufacturers adopted the convention of depicting lines with engraving, and many modelers who got their start in the 80s and 90s are rather disdainful of raised line detail.

Now, the funny thing is, it's not that one method or the other is entirely correct. If you look at enough aircraft, you'll see that some aircraft have very fine panel lines which are not raised, others have lines that are, and there can be a mixture. For an aircraft that had overlapping panels, for example, raised lines might look better. It all comes down to what you want to do, whether you have any references and whether you want to take the time to represent one or the other detail.

Same goes for raised or recessed rivet detail. Some rivets were raised, some were flush, some were slightly recessed. Monogram's old TBF and SBD, for example, are peppered with raised rivets that look too obviously oversized--till you paint the model, and then they look OK.

For me, I don't mind them, especially on these Monogram large bomber kits. Under a coat or paint, raised detail often doesn't look that bad, or looks pretty realistic. I can't speak for contest standards, but then, I build what I want, the way I want, and I don't enter contests, I think too often judges expect a certain look that's not necessarily realistic.

Oh, and regarding the instrument panel, I think it turned out better for you, that the decal didn't work. I think the IP looks much better painted, with some drybrushing to pick out the raised details. I would add a drop of clear gloss acrylic to each instrument dial, too. You'll see it all, under that greenhouse canopy, when it's all done (though I drilled the pilot's window out, on mine, and stuck the figure of Colonel Tibbetts' in the window, just like in Shep Paine's dio )

Looking forward to your next progress!

Did you try contacting the manufacturer for replacement decals? I know that Testor's is great with customer service. Maybe Revell is too?
You must log in or register to reply here.
Share:
Reddit Pinterest Tumblr WhatsApp Email Link