Theres a thread over at Starship Modeller about the likeliness of Bandai releasing a large scale Millennium Falcon model kit hopefully soon, the main topic being whether it will be based on the 5 foot Falcon or the 32" Falcon......and the likeliness that it would be a tie in with the new film coming out at the end of the year.

If it is an Episode 7 Millennium Falcon then it would be based on the 5 footer (with a different Radar dish...after the Lando incident)

I gave a brief history of the Falcons appearance which was like this:

It IS the Millennium Falcon, all the work that went into it....all the details, super fine details,....but the model was BIG & heavy and hard to get those agile & active shots.

So a smaller 'stunt' model was needed,....'dont worry the audience won't notice the difference because when the stunt model is on screen, there'll be so much motion blur',.....when the camera has to linger on the Falcon in the film (obviously apart from the full size set....and 2 other shots....stuck on a Star Destroyer & dangling from the Medical Frigate....could you imagine the size of making a Star Destroyer Command tower for the 5 footer?) the higher 'Real' Falcon....the 5 foot ship was used

When the SE OT was re-released 1n 1997 a new shot of the Falcon was required to show it's engines warming up as it lifts off from Mos Eisley....A CG model was constructed using a combination of both Falcon Models,....the back end is mainly the 5 footer, but the front end is the 32"

Later a matte painting of the Falcon parked in the Death Star Docking Bay was re-composited using what looks like the same CG Falcon....but the back end is now 32".....so this shot is probably the physical 32" studio model

On now to what we can get

MPC's model was of the original Falcon & really not bad,....I love that model...nostalgia

I think Fine Molds released their 1/72 model of the falcon in 2005 before Master Replicas MF, they decided to make a scale model off the 32" I don't know how much access the FM modellers were allowed, but they got some fundimental measurements wrong

When Master Replicas were releasing their studio scale model of course they made a 'Replica' of the 32"....they were allowed complete access to it and successfully duplicated it,.....but the 32" didn't really deserve this superstardom,....it wasn't meant to have all this attention & people scrutinising it's every detail,....it wasn't the REAL Falcon

So now all these years later DeAgostini is letting us build up a part-work Falcon,....studio scale...again of the 32"

The Millennium Falcon returns in 2015's 'The Force Awakens'.....what are they using?

They obviously need this ship to be active & agile....but the main thing....they want to take us back to the 'Old Star Wars',....they want us to see the detail

So they've made a hyper detailed CG model of the REAL falcon,......the original Falcon,..the 5 footer is back..

...everything is there (apart from the dish that Lando Knocked off)....but more, finer greeblies

So Bandai have got the Star Wars licence for Japan,...all of the kits they've released so far & are planning on releasing are Original Trilogy kits (Thankfully Prequel kits are not the priority at the minute)...theres XWings, TIE Fighters, Scout Walkers, Droids, Speeder Bikes, Stormtroopers & Vader......

Bandai have so far surprised us with superior engineered & detailed kits than even FineMolds have given us, with optional parts for building different versions....Imagine if a new 1/72 Falcon kit allowed us to decide on a 3 gear ANH Falcon / 5 Gear ESB, RoTJ & beyond version,....the option for circular or rectangle dish

How much would it cost though?

[When they built the original 5 footer, they never made landing gear for her.....the clever idea was to build the full size prop as close to the 5 foot model as possible.....3 landing gear......they only built about half of the ship into the soundstage wall,....an extra support for the front end of the ship was disguised as a refuelling/charging hose going up into one of the open areas beside the lower jaw.....the soundstage was redressed from Mos Eisley to the Death Star hanger and the job was done

For Empire Strikes Back a more fuller Falcon was needed for the Hoth & Bespin Landing platform,....they couldn't get away with adding support from a wall.

The 5 foot model was then also modified with the 2 extra landing gear boxes & gear for the ship landing on the Cloud City platform.

After that a lot of posts were about how to spot differences between the different models, so I thought I'd make it easier

...and a broken Quad gun after ESB:

Front on.....differences in the Mandible ends:

Next the boxes on the mandibles / hull 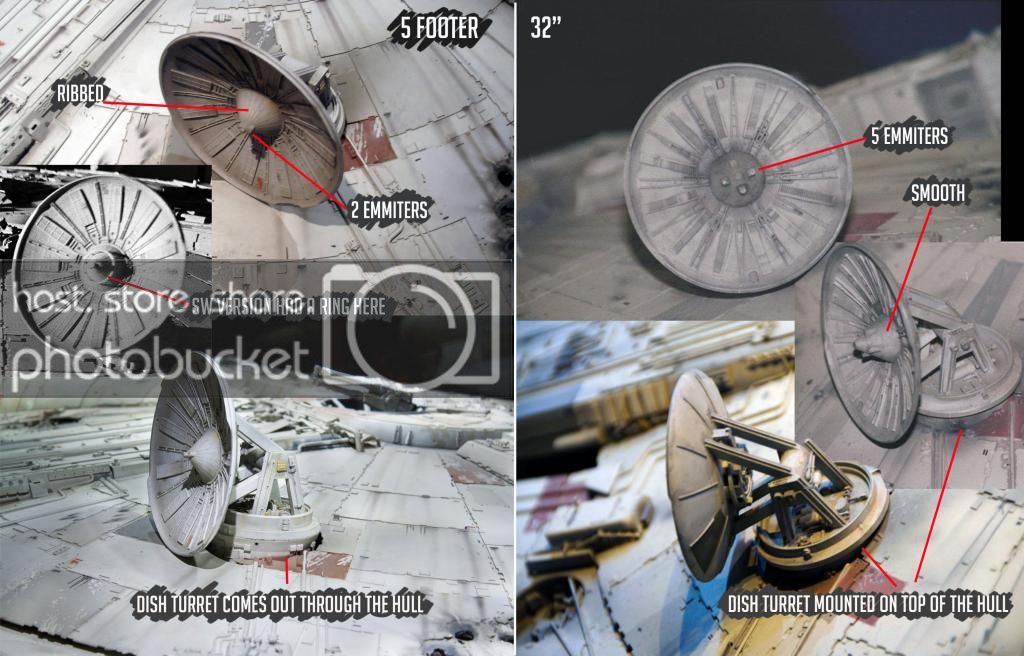 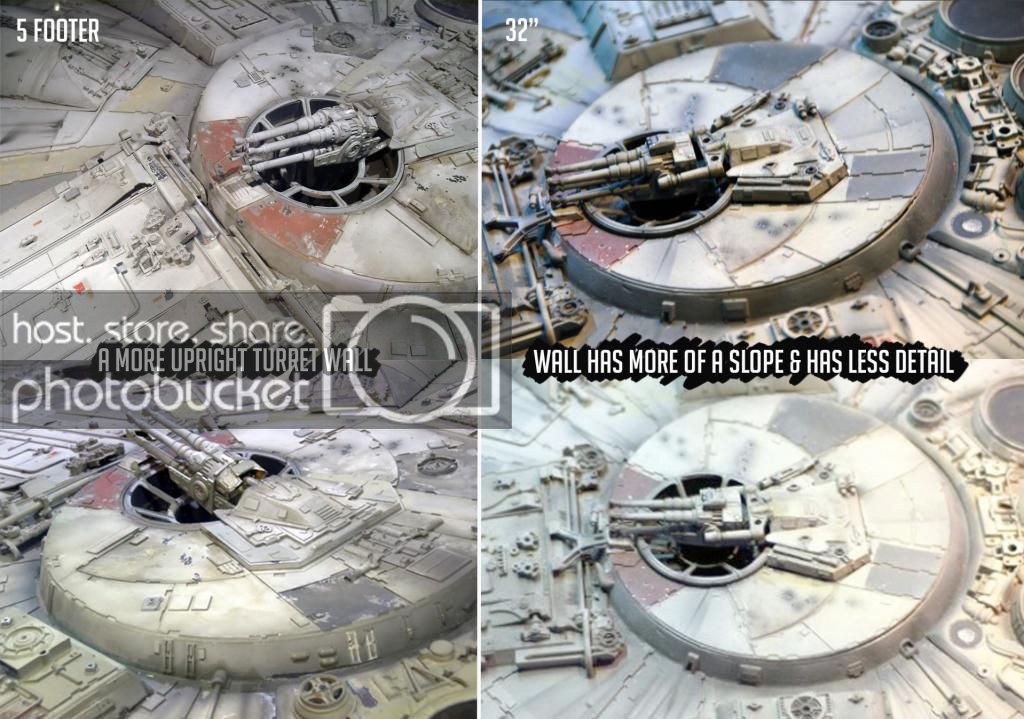 .....and the back end, the spacing of the vertical Fuel drive pressure stabiliser things:

Thats it for tonight,.....there are obviously TONNES of differences,......But at a glance, you should be able to pick out which version you are looking at from any angle

Hope this is a help

That is quite a schooling John. Thanks man. Read it all - great stuff.

A very useful reference, John.
A lot of people forget that there were different "studio models"

Thanks mate, your the go to guy for sure when it comes to Falcons!
K

I agree the 5ft does have incredible detail (I've stood a foot away from it in person), but I love the 32" equally. I fell in love with the Falcon in ESB as it twisted, looped, and barrel rolled through the asteroid field. That was the 32" all the way! I also love the lines of the jaw box and mandible toe in on the 32" Falcon more so than the 5ft. JMHO. Not sure the Bandai is totally accurate to the 5ft either. The jaw box and mandible overlap doesn't look right to me.

Thank you for the info,...
Looking forward to the new movie...
Oh and Merry Ho Ho
Cheers

A very nice website that has been mentioned on FaceBook today about the history of the Millennium Falcon concept:

The interesting thing is how much effort & design that went into making the 'Pirate Ship' only to have the ship shelved all because of Space 1999's Eagle Transporter......so they redesigned the shape into the 'Burger' shape we know now,...

...why did they call it 'The Millennium Falcon'??

Because of that Space 1999 Eagle