The Army of Frederick the Great

This next figure is an officer from the allied army, an officer of Luckner's Hussars in Hannoverian service, circa 1760: 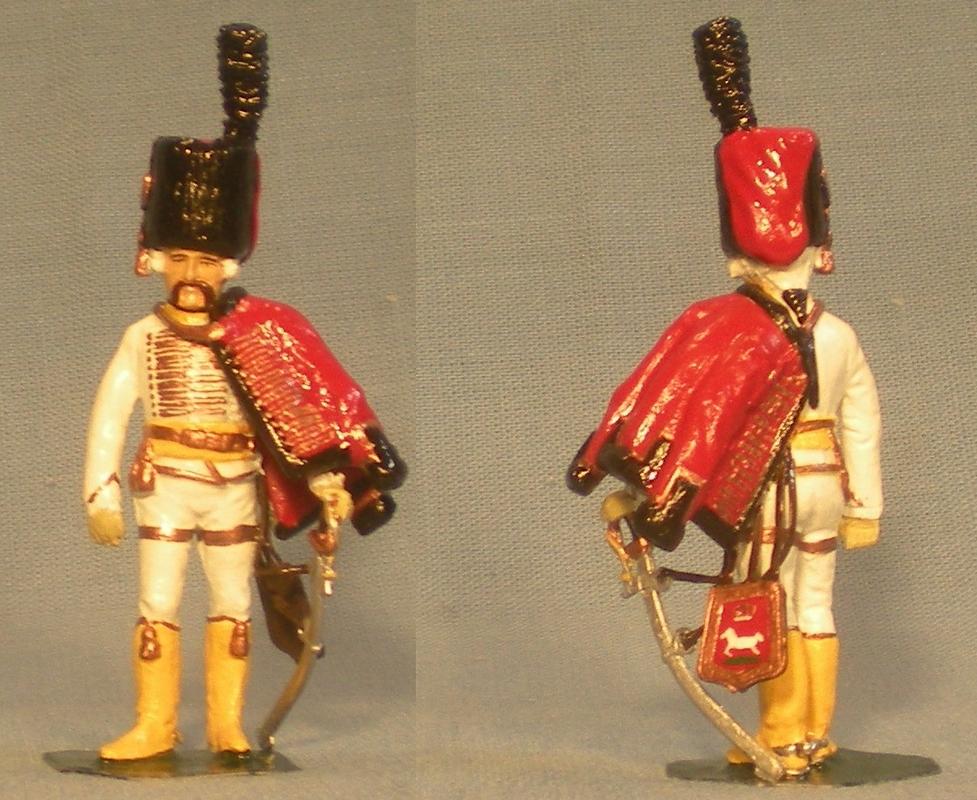 This is a Stadden casting, and after painting the Franklin Mint castings, and Hecker & Goros, Sanderson, Puchala, and other makers' castings, I'm spoiled by their crisp detail, which makes painting the softer Staddens like this hussar more of a chore at times.

The regiment's Chef was Nicholas Luckner, a Bavarian (well, he was an Oberpfälzer) who served in the 1740s in his Elector's army, including in the Netherlands. He had retired before the Seven Years War broke out, but in 1757, he raised a troop of hussars with his own funds, and entered the Hannoverian service. He and his hussars served well; Luckner was eventually promoted to general and the unit eventually numbered close to 700 men.

Their original uniform consisted of a dark green dolman and Pelz, and red breeches, with a black Flügelmütze. This was dangerously similar to the uniform of the French Hussards de Fischer, and in 1760, a new uniform was introduced, with a white dolman and breeches, red Pelz with black fur trim, and a black Pelzmütze with a red bag.

And the next figure promoted from my gray army into the finished collection: Ferdinand, Duke of Brunswick, a Stadden portrait figure: 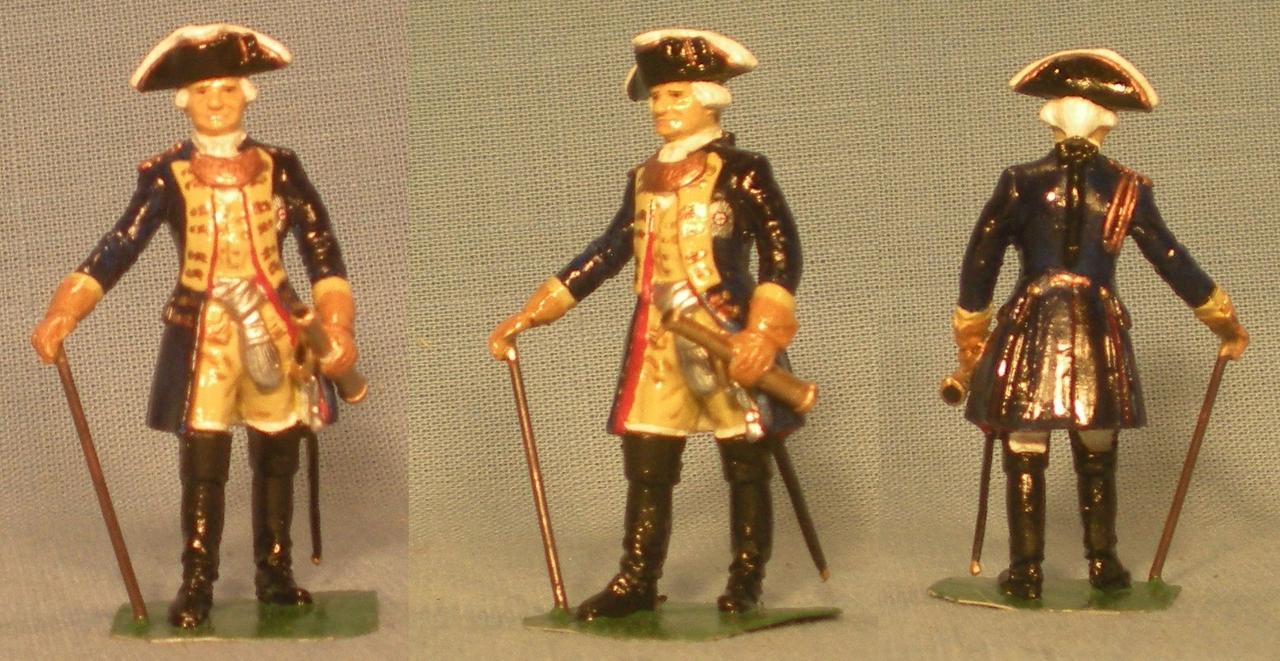 As with many other Stadden portrait figures, it doesn't really look like the subject. I picked this up off eBay as a "Stadden Hessian Officer". I noticed the star of the Order of the Garter on his left breast, and that was the clue. Ferdinand was awarded the Garter for his success commanding the allied army in western Germany. I checked my old Stadden catalog and found that sure enough, he's listed among the personalities in the Prussian army catalog. I've painted him in the uniform of his regiment in Frederick's army, "Alt-Braunschweig", or "Brunswick-senior" (IR 5). Though, the shoulder cord is inaccurate. But I didn't want to file it off. The telescope is a neat touch, though, and it's what makes Stadden's old custom figures so cool.

I've been experimenting with glazing, too, using clear acrylic with a little bit of tint, to pick up the cast relief on a figure.

Pretty nice paintwork Baron
Is it your choice to leave them glossy, or is the paint still wet..?

Belugawrx said:
Pretty nice paintwork Baron
Is it your choice to leave them glossy, or is the paint still wet..?
Click to expand...

Yes, I like the gloss finish, because it hearkens back to the classic toy soldier look. But I do use castings with as much detail as possible, and as you see, I try to pick out or use that detail.

I've got lots more in the stash, and I've been painting over the winter. Though most of those figures are for my "Berlin 1910" collection, of the Kaiser's Army, with troops on parade and civilian and military spectators. I need to photograph the latest batches and get them posted.

Yep. Or like classic toy soldiers, from back in the day.

Hi, all, I'm on another tear and knocking out some things that have been on the bench over the winter.

Here is another example of the Franklin Mint Bosniak officer. I painted this one in the summer uniform used after the war, which reversed the coat colors from the winter uniform: 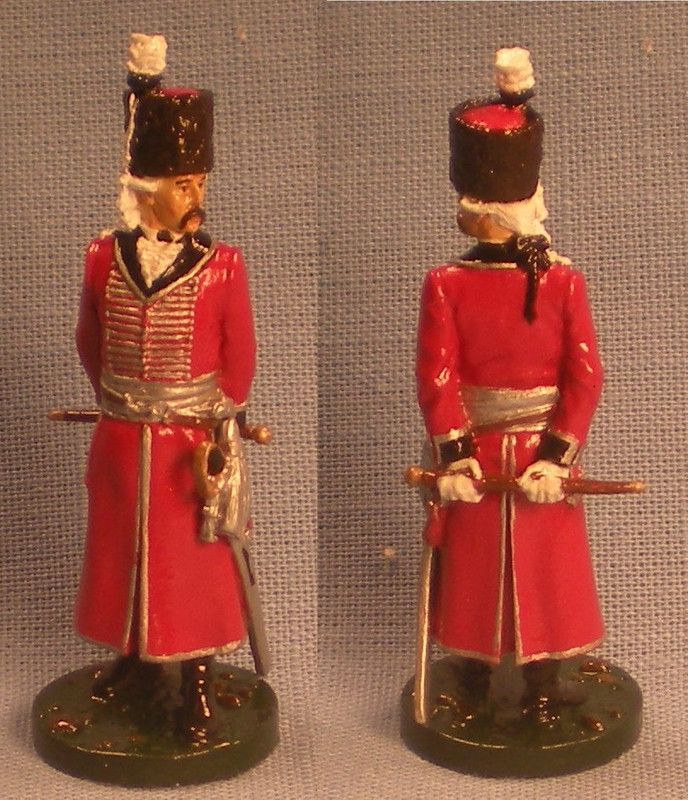 And another example of Stadden's Duke of Brunswick portrait figure, which I've painted as a field officer in the uniform of Brunswick's regiment (Nr. 5). I painted the breast star as the Order of the Black Eagle, though it's not very visible in this photo: 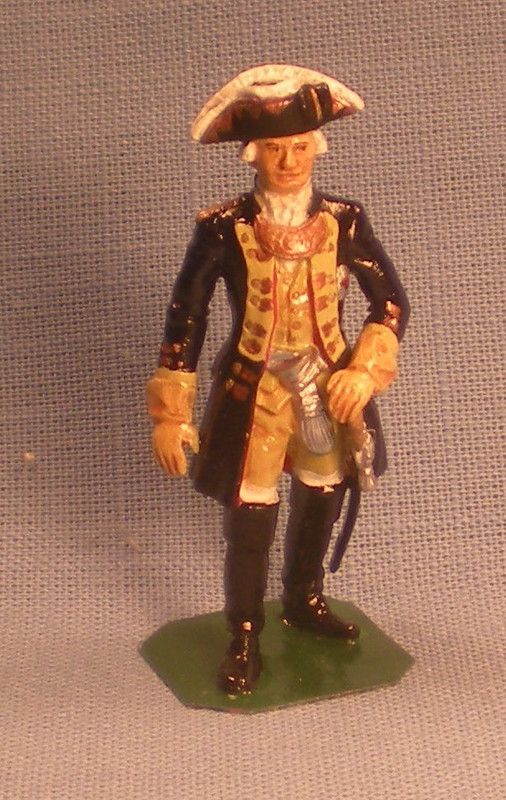 This photo also illustrates how Stadden could provide a wide variety of subjects, from the same basic casting.

And last up today, a pair of company officers from Winterfeldt's regiment (Nr.1) with red facings and silver lace: 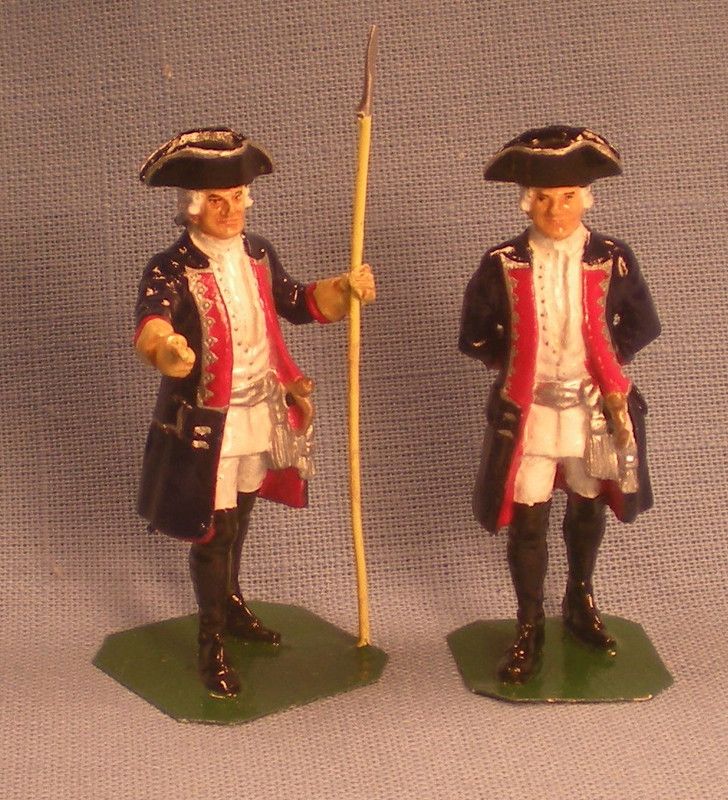 The uniform lace is finely engraved on the castings. This photo also illustrates how the same basic figure could be posed and re-posed for an almost infinite variety.

I know I always say this, but I do have some more on the bench, which I should have finished in a couple of evenings. So I should post again shortly.

As always, thanks for looking!

Here's another one to post, a Grenadier fifer of the Fusilier-Regiment "von Bülow" (IR 46): 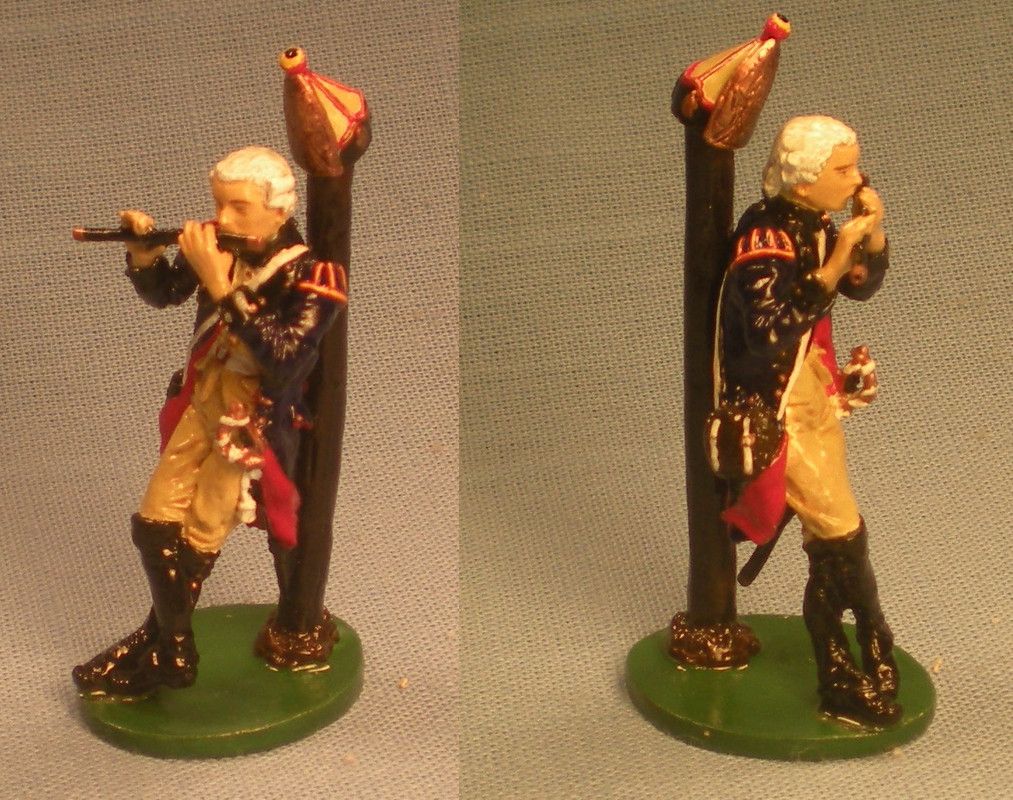 I finished this some time ago, but never got around to taking a picture. This is a kit figure from Rylit. The hands and flute are cast in a single piece, as are the arms, so it was fiddly to get them to line up just right. But it's such a cool pose!