It looks like bootlegtattoo has brought the fantasy stuff here in style, so here's some sci-fi.

First off, thank you Scott for the show. It's been fun to watch, I've enjoyed watching you learn, and I've learned some new tricks along the way. Regardless, it's great fun and you do a great job putting it together. I'm always impressed with your production values - it's a very professionally edited and packaged show, especially for a one-guy effort.

I primarily play Federation Commander by Amarillo Design Bureau (the same guys who have done Star Fleet Battles since 1979). FedCom is their more modern streamlined game. It plays more like Full Thrust and games like that, but is in the same "original series" Star Trek-based setting as SFB. 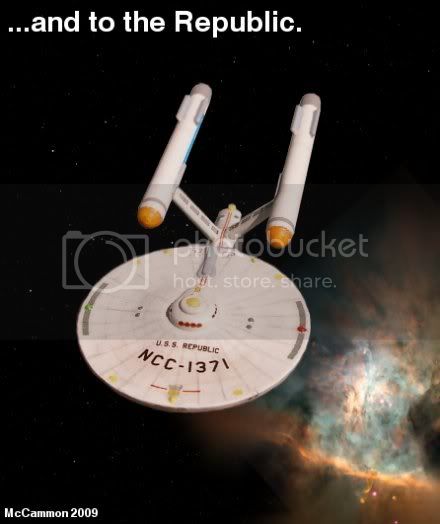 This is a Federation Constitution-class Heavy Cruiser. It's about three inches long.

This particular mini is one of the ancient plastic ones. I got it when I was 14 (in 1983!) and it languished with exposed yellowing plastic and some terrible paint details for nearly 30 years, with the engines both broken off and other indignities.

Last year, I decided the old girl and her sister-ship deserved to be resurrected and included them with all the new minis I had recently purchased. I stripped the old paint, repaired the damage with brass pins, gave her a proper paint-job for the very first time, and ordered and applied custom decals. I went with a slightly "retro" paint and decal scheme (she has the orange glowing engines like the series Enterprise, but has the gray saucer-arcs and other markings like the 2nd pilot episode version). In the game universe, the Republic is a very old ship that has been refitted several time to keep current and I thought the mixed-bag look would be appropriate for her and her sister Reshadije. I have four other Federation Heavy Cruisers that are of a more modern pewter miniature type - they look slightly different and will be painted up "stock".

I also sculpt masters for new minis for ADB, sometimes from scratch, more-often by modifying existing lead minis. I have a section on my PhotoBucket to show works in-progress.
Here's a shot of one of the current projects: 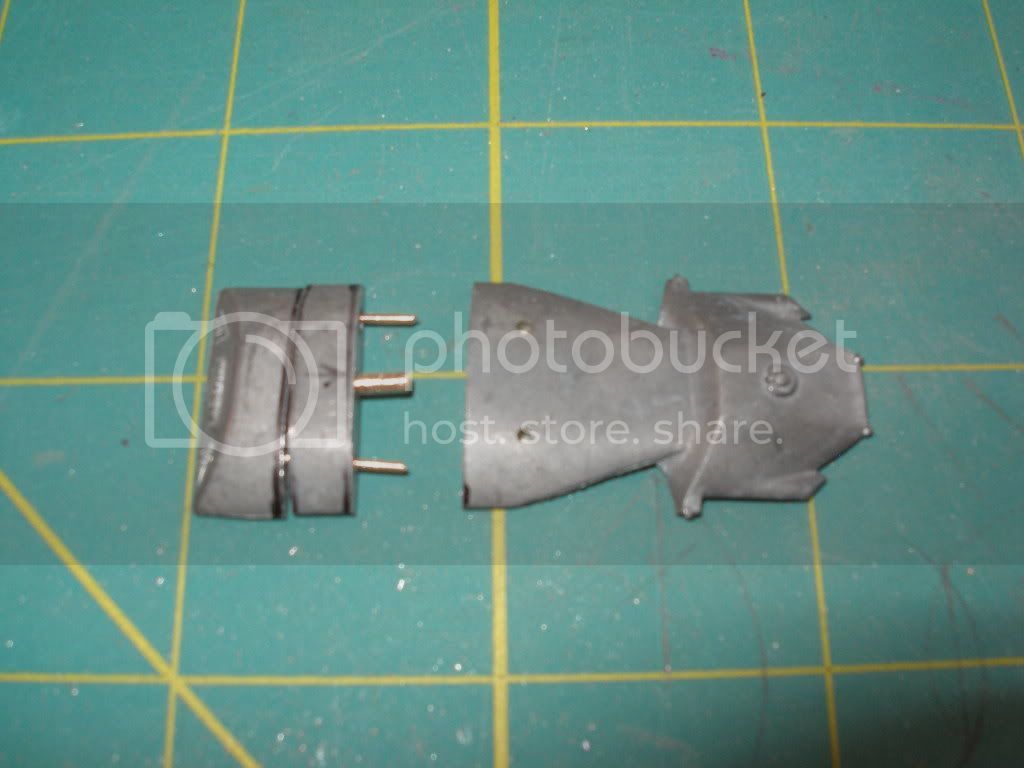 This is three 1980's-vintage lead Federation "old Light Cruiser" minis, cut and being pinned together to create the master for a larger ship. The pins help keep the pieces aligned when under heat and pressure in the master-mold (just glue alone tends to fail and let things shift, ruining the mold).

I hope these are of some interest!

HI djdood, Welcome to the forums! Thanks for the kind words. I appreciate that. Great paint job on that mini!
B

wow u said i came in style....look at u bro!!!!!!!! so u cast ur own figs????? i always wanted to get into SFB even bougt a book in a used section one time (gosh must of been like 82 - 83 era) but the book was HUGE and i was lost and with noone else into it it kinda fell by the way side. but i'm into planes and plane combat so it looks like fun. anywho nice work bro
D

Thanks bootlegtattoo.
I'm still learning, but all the plastic model kit stuff I did as a kid and in my teens is serving me well now. Same skills; different scale.

I don't cast anything (yet). I've read up a bit on it and it sounds cool - I like metal-work, so it might be fun someday. It takes some pretty expensive furnaces and spin-casting rigs to do though. Not to mention, it's pretty dangerous to be slinging molten pewter around. My wife would not approve.

Right now, I just do some of the "master copy" models (either kit-bashing existing parts [like in the picture], sculpting from scratch in brass and epoxy putty, or modeled in computer and "grown" in wax via sterolithography). The common term for these masters is a "green", since in the much more common and prolific world of figure miniatures (for things like War Hammer or D&D) they are sculpted in "greenstuff" epoxy putty. After approval, the master goes off to the casting house where their mold-maker makes a high-pressure/high-temperature vulcanized-rubber 2-part mold using it (the master is usually destroyed in this process). That mold is then used to make several "production-masters" which are used to make a large 2-part production mold (which will pop out multiple finished minis each time it is spin-filled with molten metal). When that mold wears out, the same production master is used to make another one.

If you liked (but were frightened off) by SFB, then you're in the same boat as me. Cool game/scary-big rulebook.
The new game (Federation Commander) I linked to in my first post is the same cool setting, without the 3-inch notebook. I taught my friends (and my wife) to play quickly - we were playing within an hour and you can finish a simple game in 30-minutes. Good times, making spaceships go "boom".
S

i have been wanting to do some mold work thats why i was asking. i'll have to check out that game cause the old one was huge like u said and if they made it smaller and easier i'm all for it
D