Hey guys, been working on this powered armor suit for the last few weeks and it's finally done! This model is an experiment of various painting techniques and types of paint that are new to me. I basecoated it with tamiya and vallejo acrylics, and then modulated the colors with windor and newton oils. The white gave me quite a problem, but the red turned out splendid, with an incredibly deep, rich color.

Then I washed it with some enamels from my new AK interactive engine weathering set. I love this set of paint! It was fairly easy to use and gives great results, superior to anything I used previously. I also tried out walthers decal setting solution on this, with mixed results. Some of the decals set quite nicely, and others still have visible outlines. At any rate, my bag of tricks has grown and I'll no doubt improve on future models.

On a whim I decided to try my hand at a diorama for it as well. I've attempted these in the past as a teenager but never made a concerted effort. Now that I'm 33, I have patience (and money!) that I lacked back then. I made the ground out of spackle, and the bricks were pre-made, got them at the local hobby shop along with some plastruct i-beams. The general concept of a bombed out wasteland building goes well with this kind of stuff. Kind of like a precursor to the more detailed Maschinen Krieger stuff. I then coated the spackle with sand, glued down with elmer's type glue.

I plan on drybrushing the sand next and adding in some grass and other vegetation, maybe a few more bits. I was also thinking of different ways to create more realistic dust and dirt on the ground. I had a crazy idea that things like cinnamon, turmeric etc, sprinkled onto an adhesive could create a realistic look of dirt that has settled out of the air.

Anyways, hope you guys enjoy and C&C is most welcome! 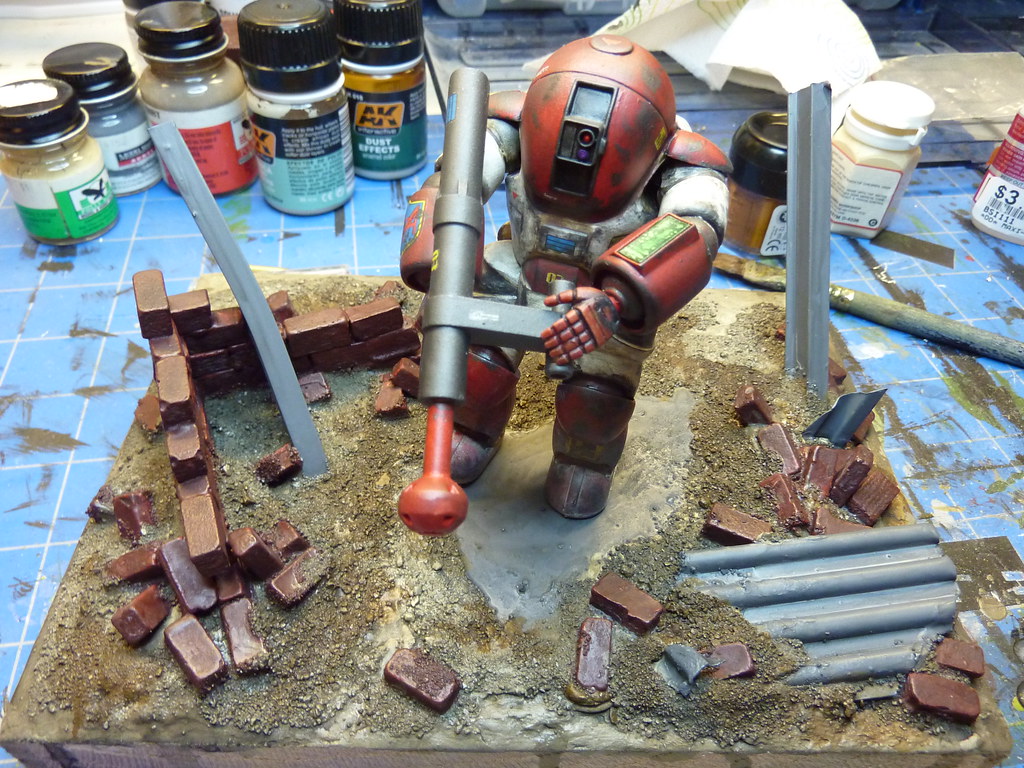 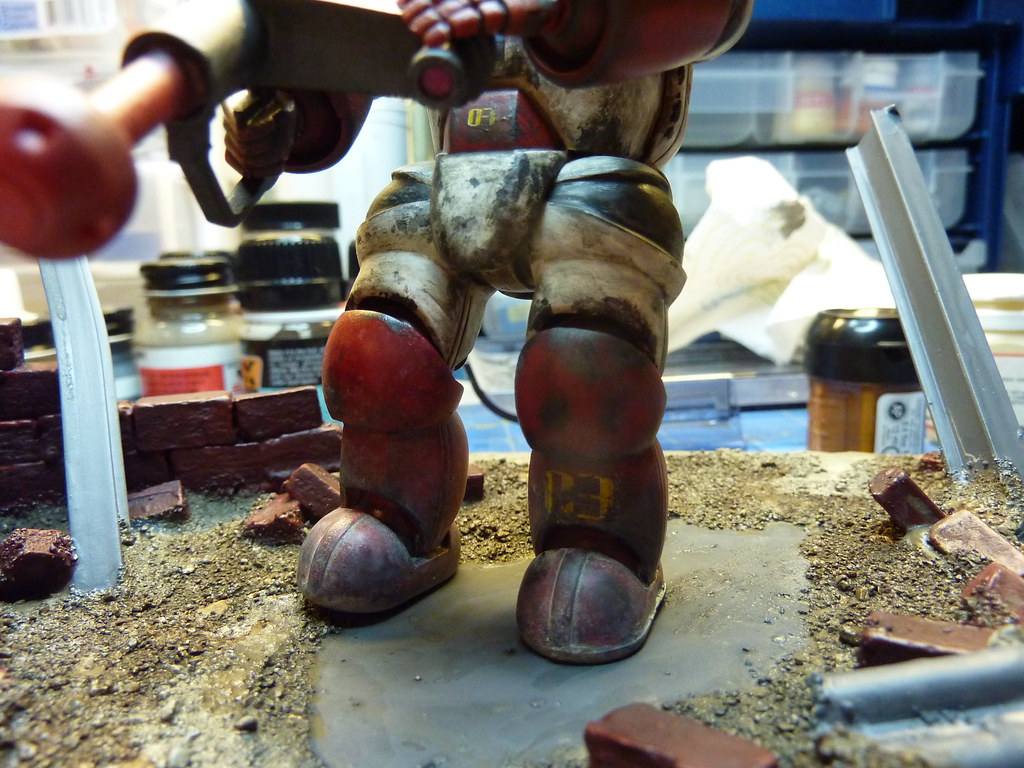 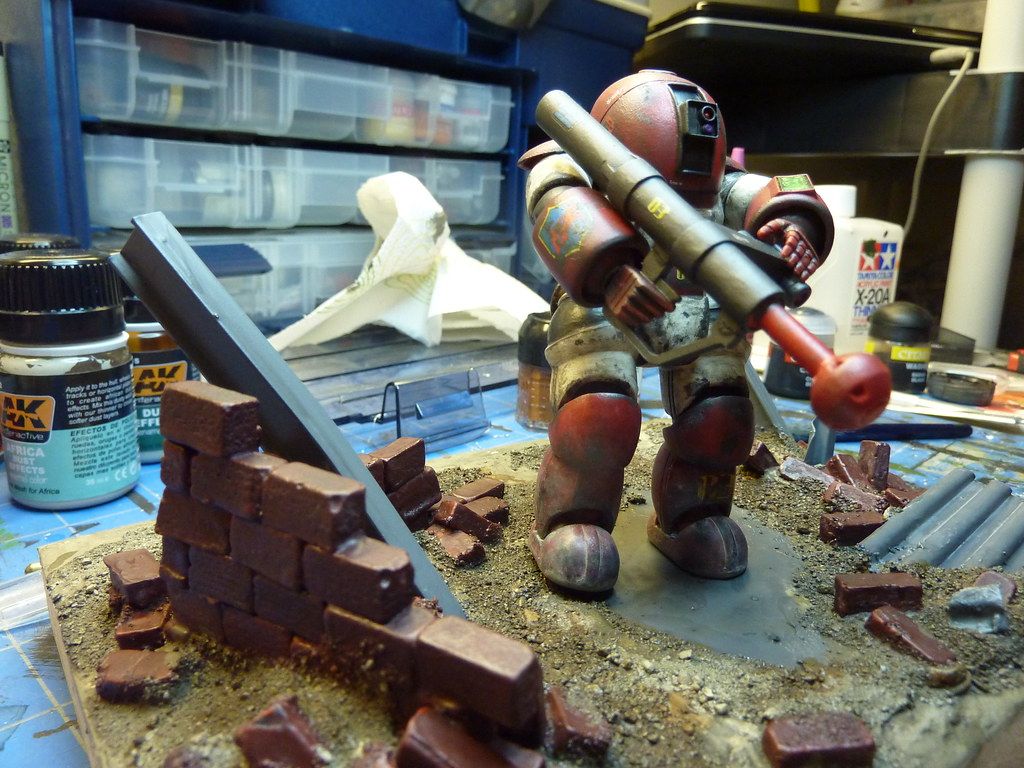 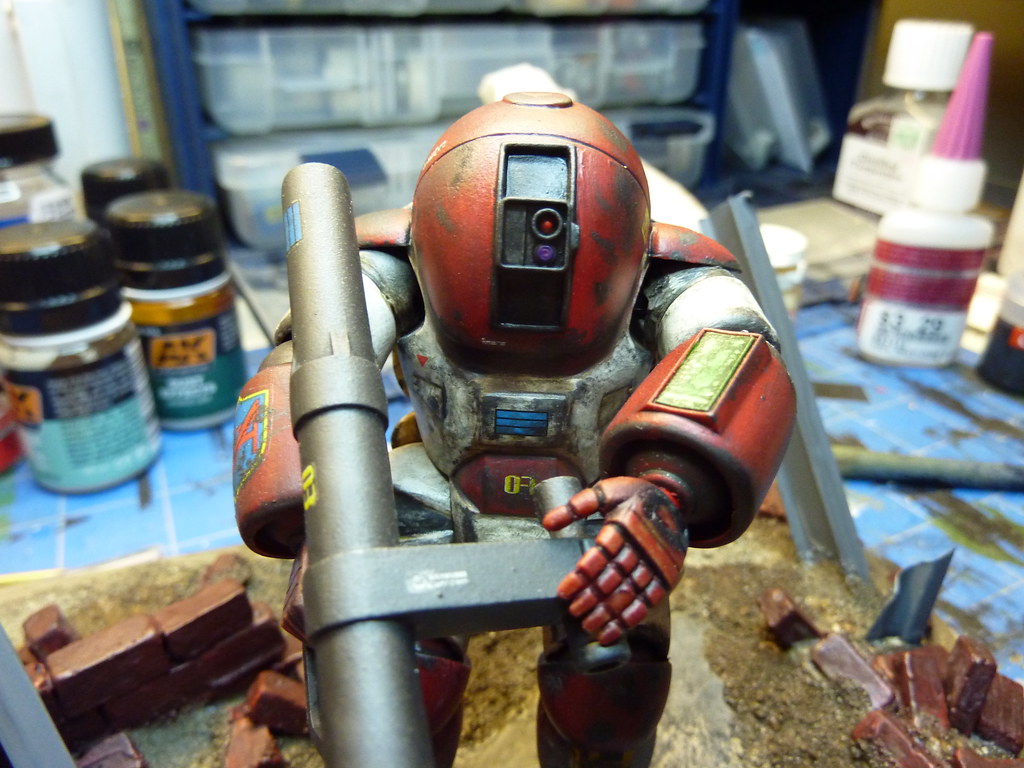 I have no idea what he is but he's quality the weathering is top notch give your self a slap on the back I'm in to afv but he would sit well in my collection.Real good work bud

Thanks guys, I'm all finished with it now and fairly pleased with it. But, there was an unforeseen problem that arose due to my process of building the diorama. The base is oak, which was untreated and unsealed. I applied thick spackle directly onto that, not realizing that as it dried, it would suck the moisture out of the wood! As a result, the base ended up bowing slightly, raising up about 1-2mm in the center.

But, I'm still proud of it and I learned quite a lot. Next time I'll be sure to get a sealed wooden base, or perhaps some other material. 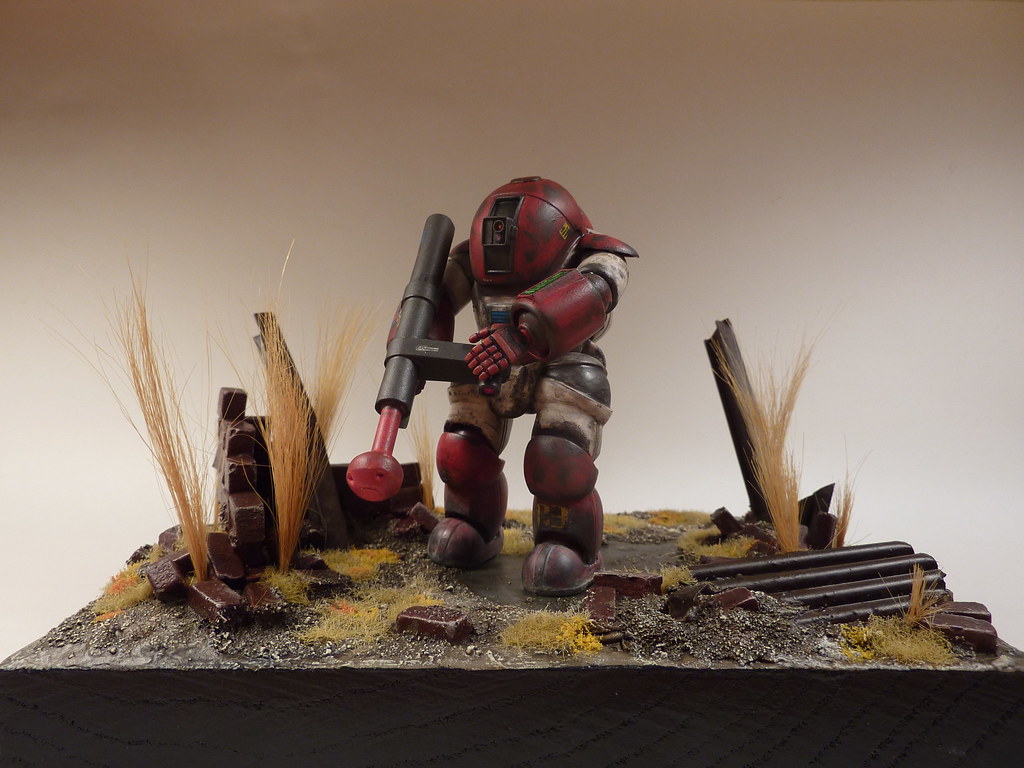 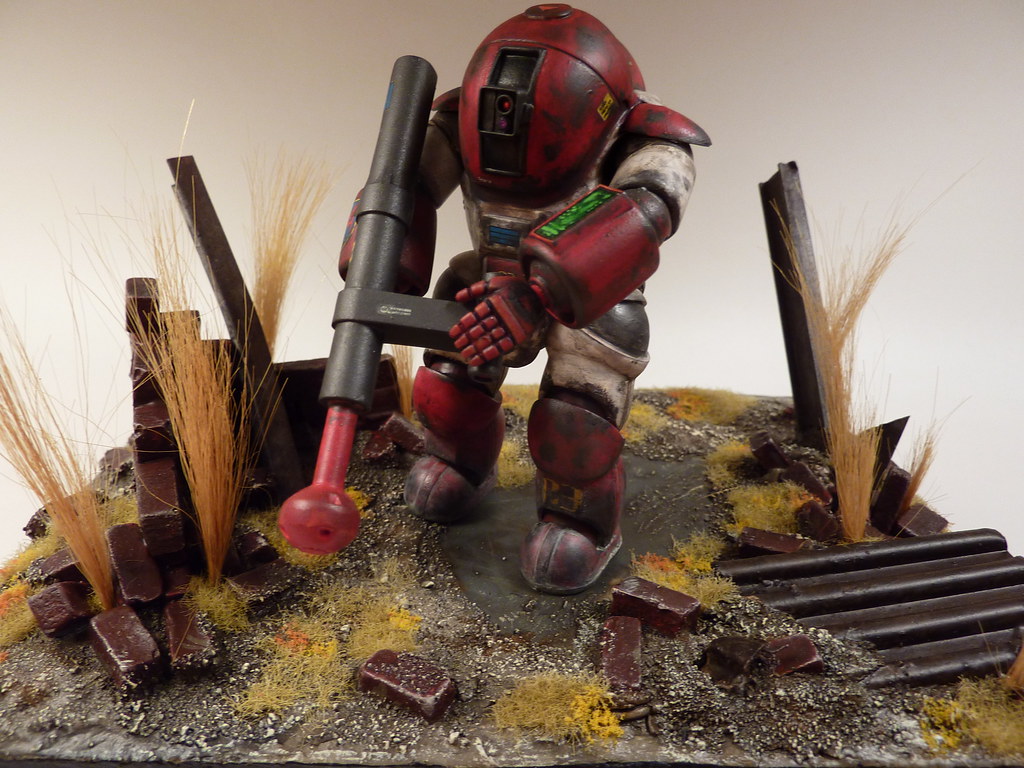 You can see how the base bowed in this pic: 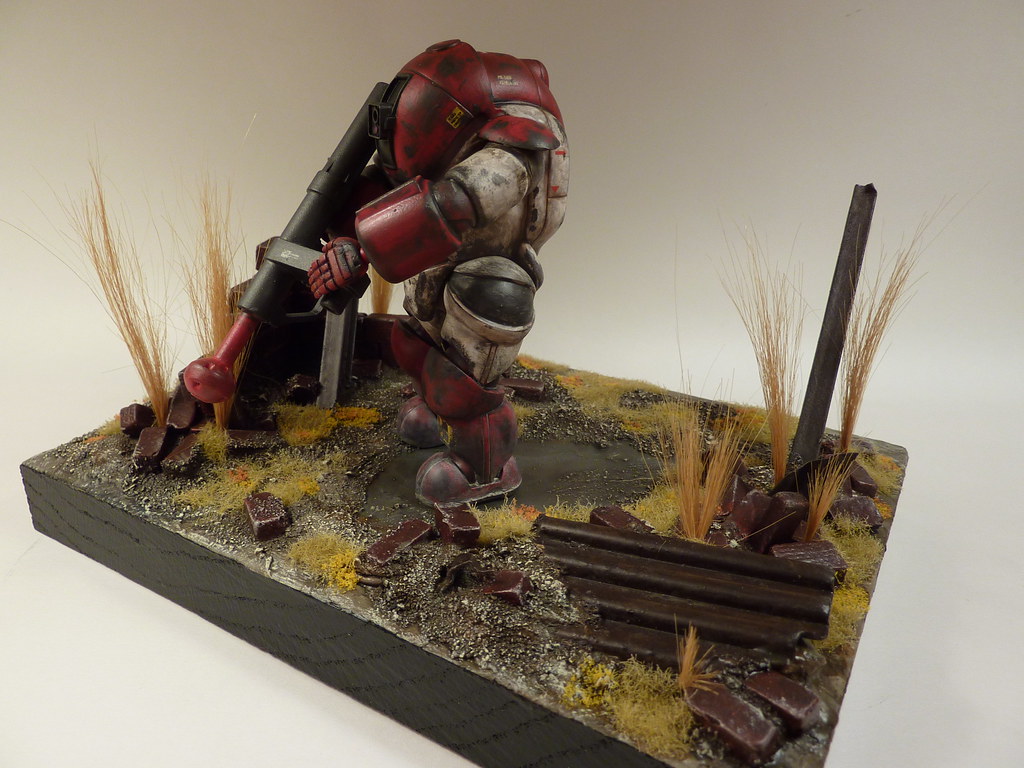 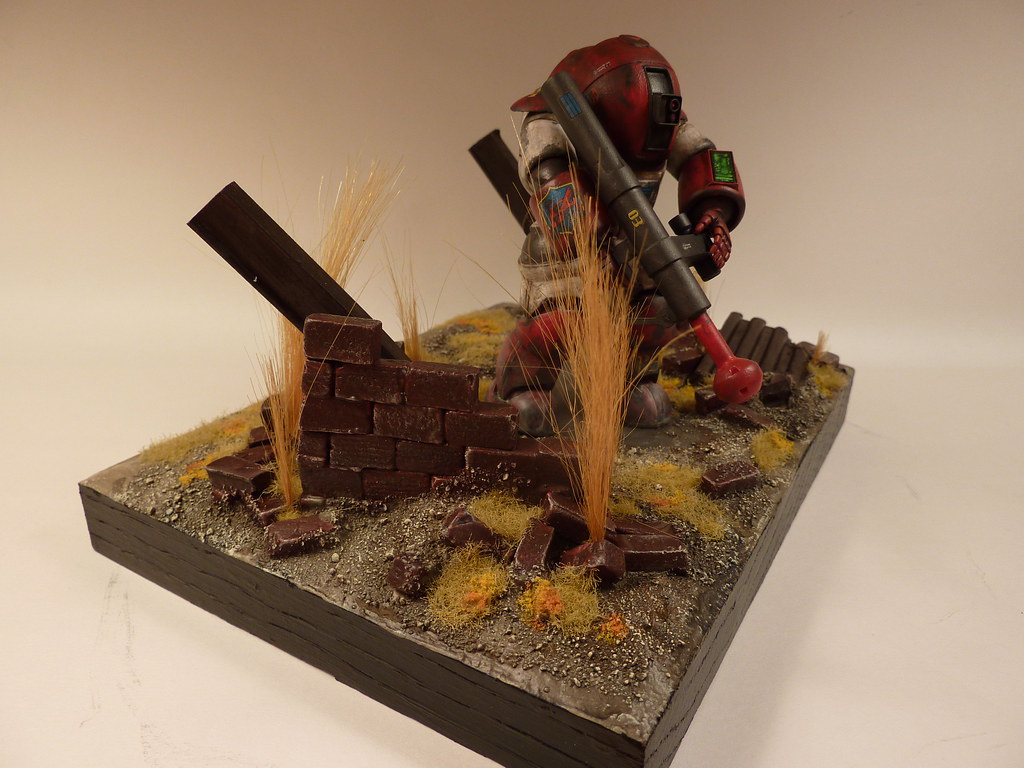 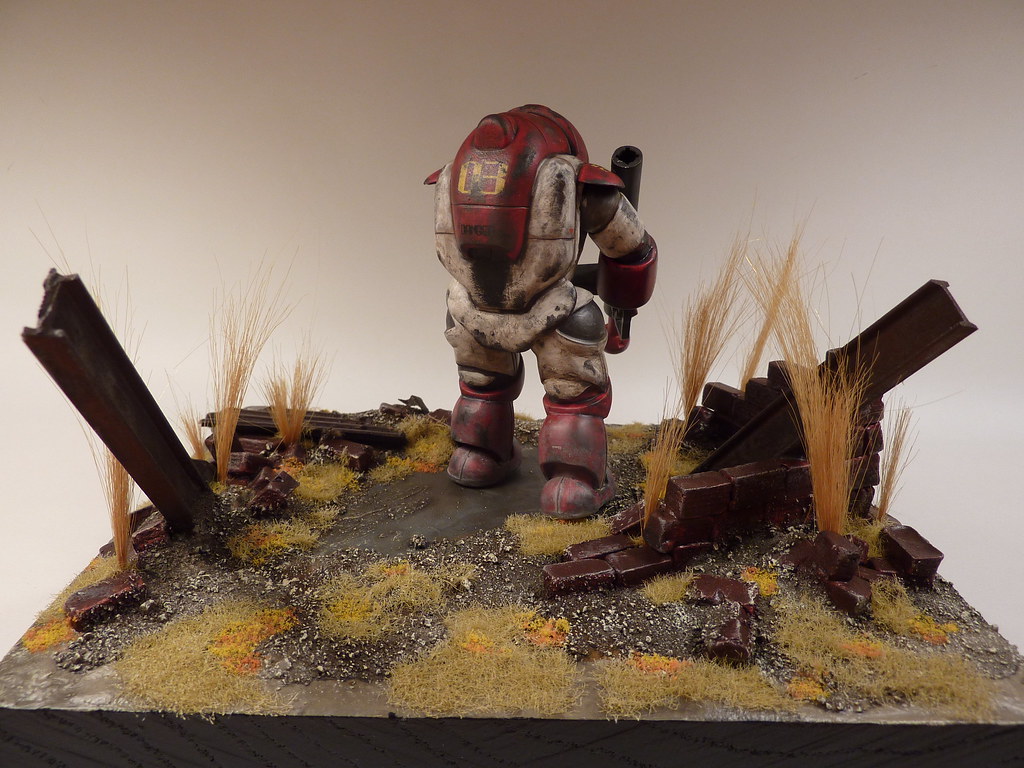 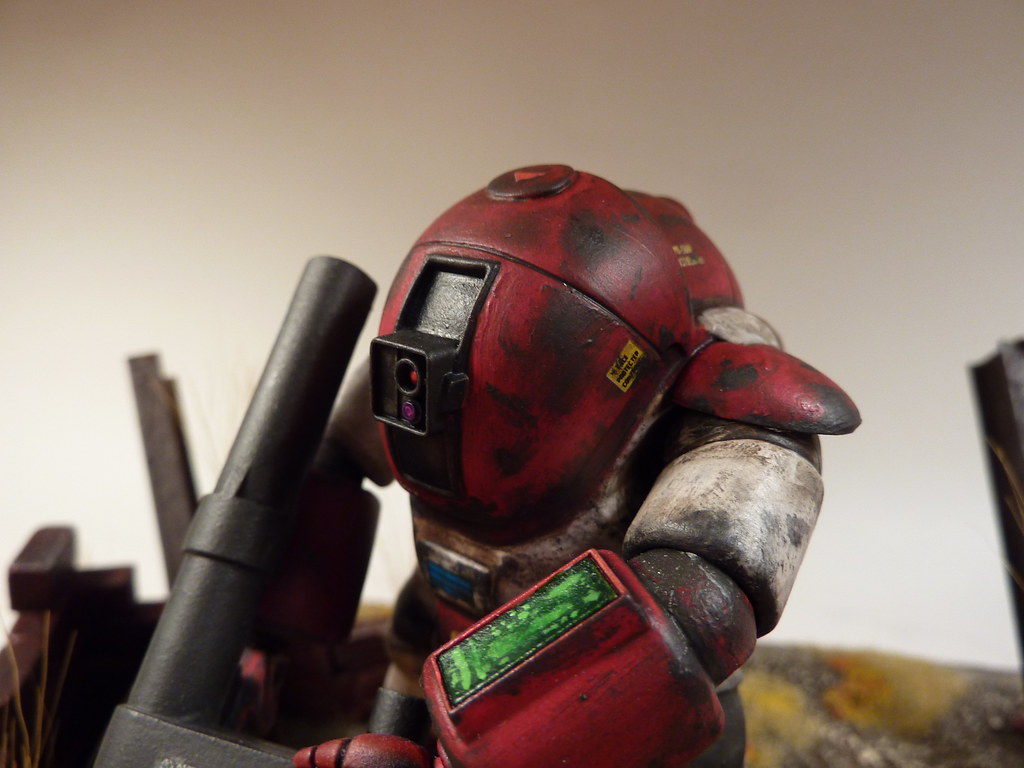 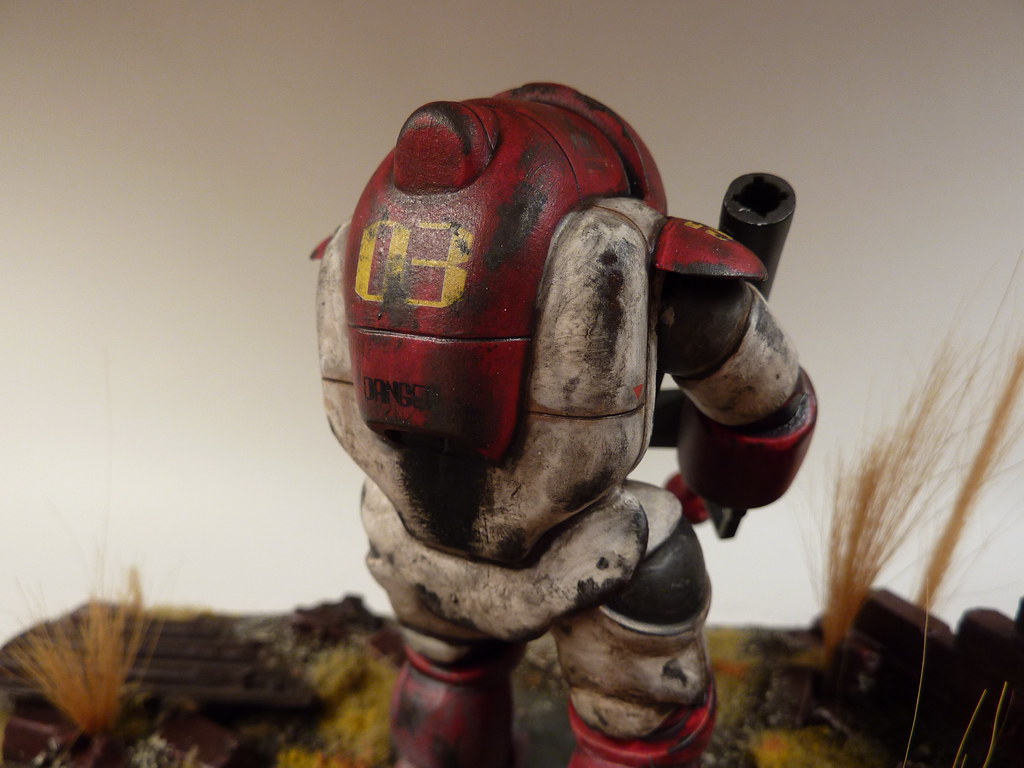 You should be proud I would be......and that's one big gun it's a cross between a sex toy and a panzerfause look forward to your next project

Looks good to me! ;D

geegad said:
You should be proud I would be......and that's one big gun it's a cross between a sex toy and a panzerfause look forward to your next project

LOL. Thanks Geegad. I am proud of it, it looks nice on my shelf and I learned a lot, can't wait to make more dioramas.
F

You've made a great job of this dio Cave! Nice work!
S

This is a real show-stopper. Outstanding job!

This looks great. Love the finish on the suit. Really cool.

Nice work, I really love that base you did.

Thanks for the kind words guys. I can't wait to get home and work on more stuff like this. I'm stuck in Canada at work for a month, so I usually end up jonesing to do some model work pretty bad by the end of my tour.

Nice work on this, I don't know how I missed it!

These are remakes of the old kits. These were done in 2003, 1/24th scale. The originals are from the early 80s and 1/20th scale I believe. Actually quite a good value as this kit goes for like 25 bucks off hobby link japan and you get 3 full models in one box.
You must log in or register to reply here.
Share:
Reddit Pinterest Tumblr WhatsApp Email Link