Hey Mike, it's the Anigrand kit and I luckily picked it up before he got the C&D. However, it's based off of SRS Prototyping's kit. In fact, Anigrand might have very well 3D scanned SRS's, rescaled it a tad and did a different parts breakdown.

Another update. Got all the seams cleaned up with good old Aves and began painting and it seems Iâ€™m taking more of an experimental approach. The whole thing got a base coat of camo gray, which has a nice little warm undertone then I hit some of the raised areas with a thin coat of white to pop them out a little bit. 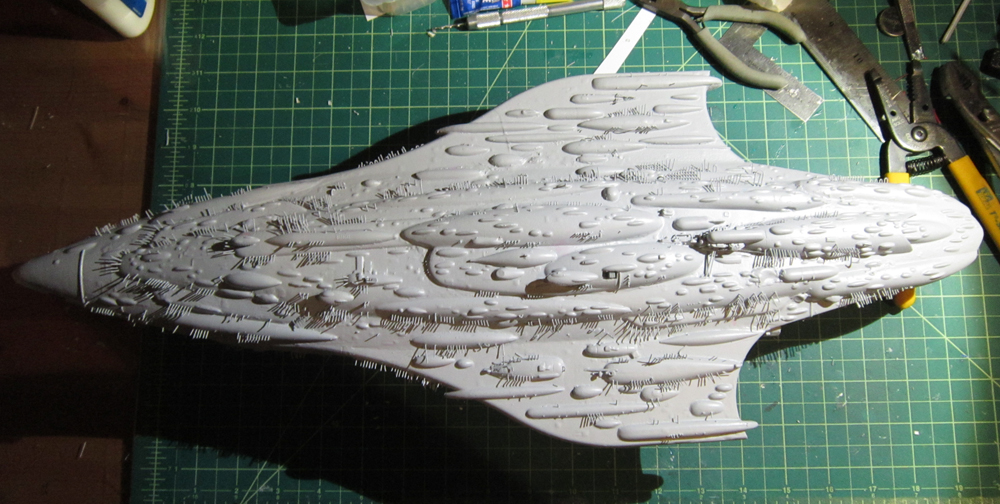 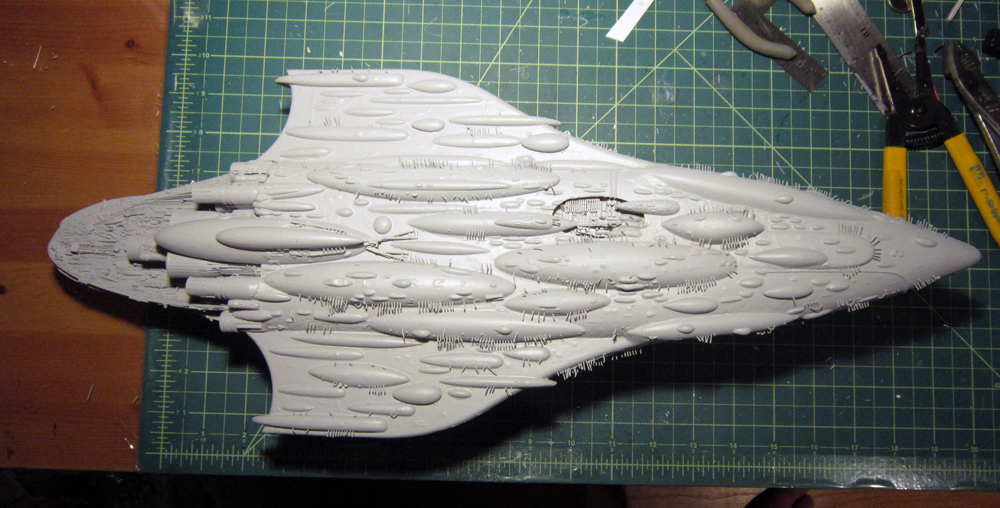 I also test-trimmed some areas of fibers and itâ€™ll look reeeeally good when itâ€™s all done. 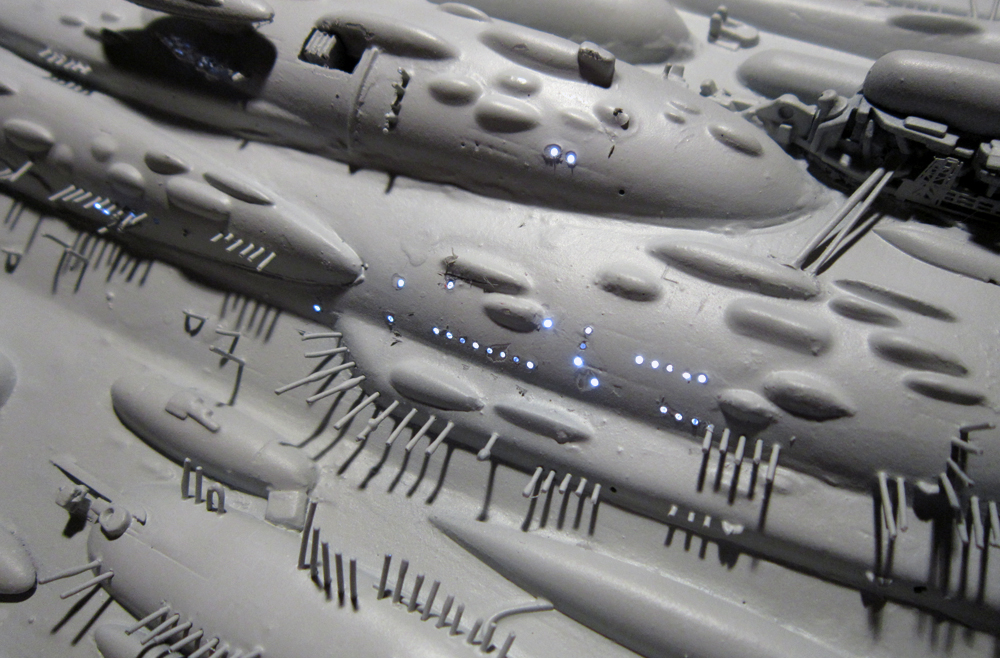 The engine array was masked off and got a coat of gunship gray, which in hindsight is too dark when comparing it to studio model pics. That area will get a little more love later on. 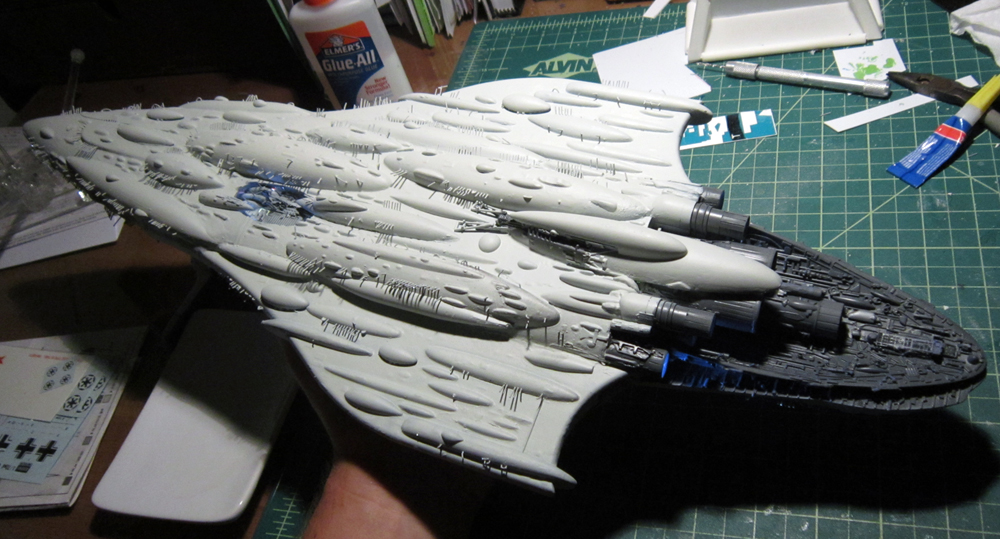 I used a bunch of small squares of masking tape to mark off the hull for the random shades of paneling but I wonâ€™t be doing a big overall coat again. However, I did hit the whole thing with some semi-gloss after those squares just so there is some variation with the overall finish of the paneling. 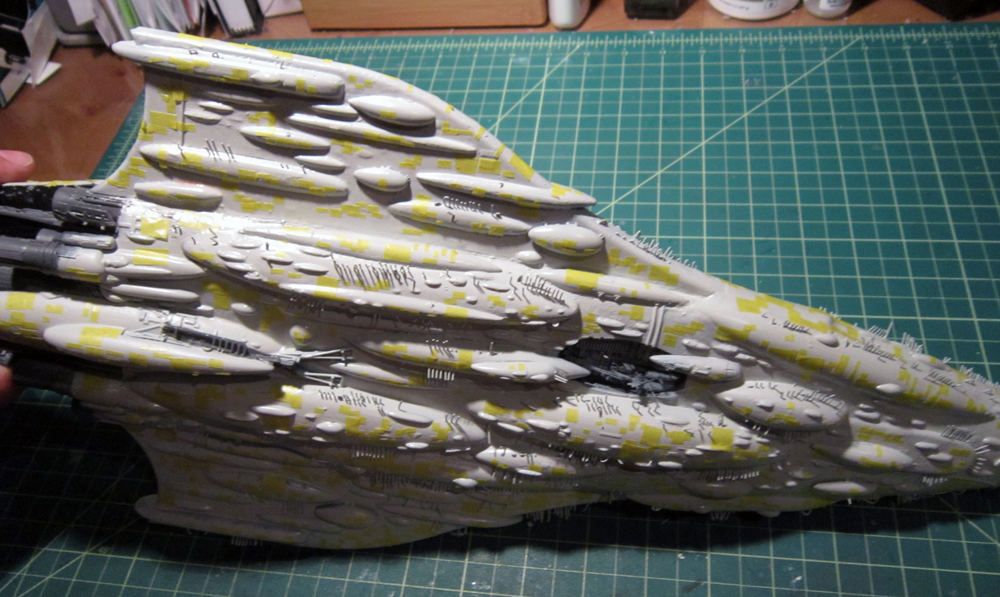 Once that was dry I placed bits of torn masking tape semi-randomly over the entire hull. The next steps will be added the splotchy areas of rust and gray. THAT is where all the masking will come in handy. 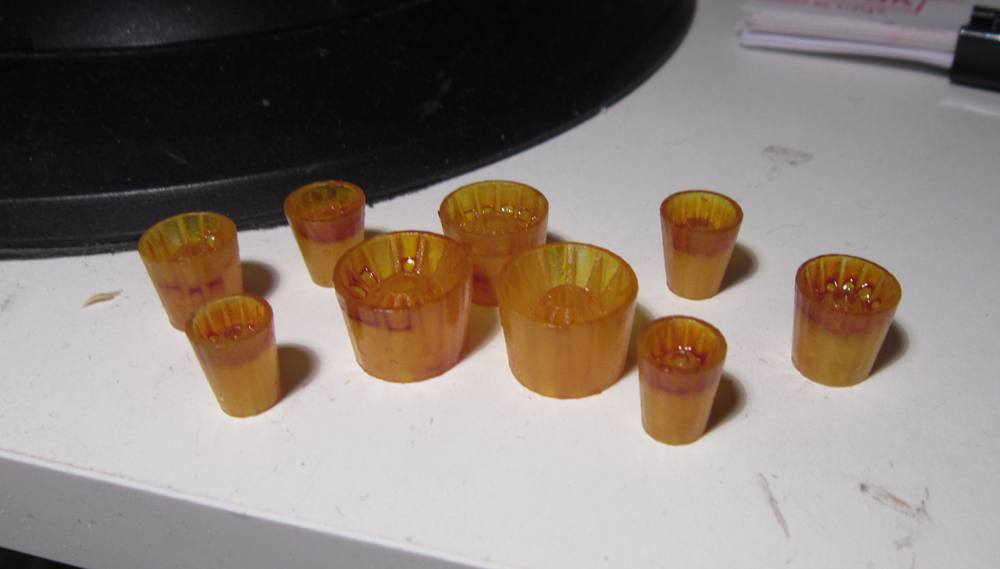 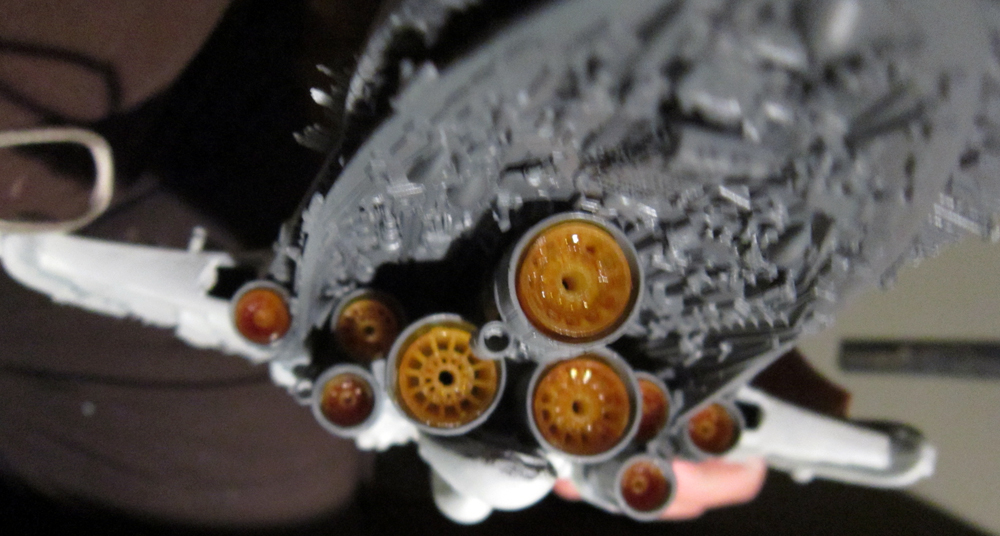 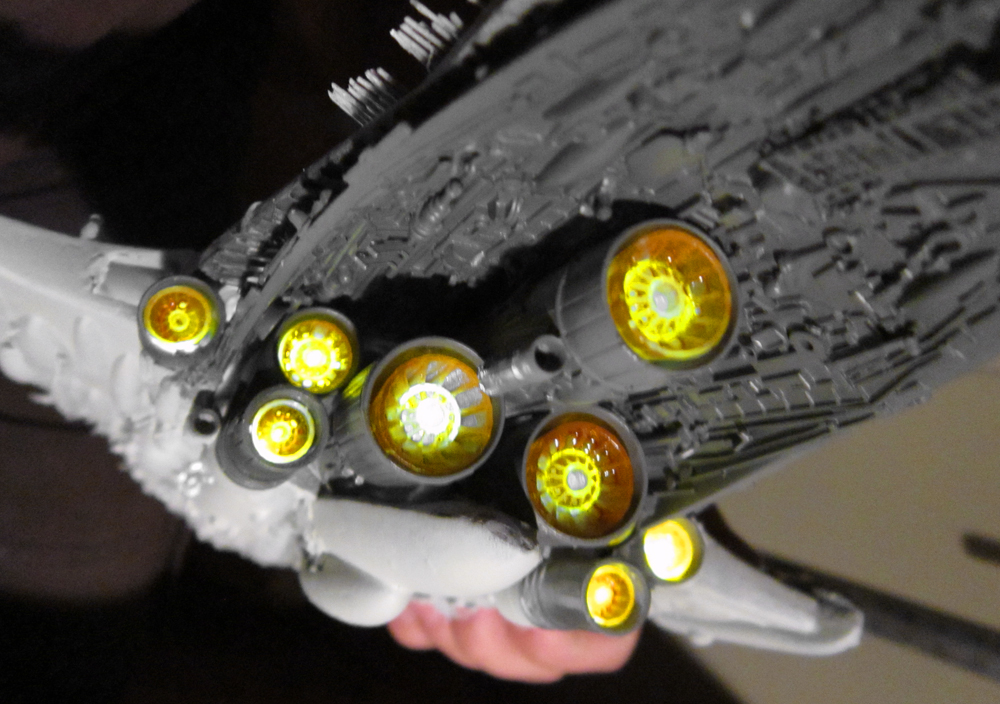 Onward! I want to finish this up before the end of the month!

Nice! A quick question: How do you trim your fiber optics up so cleanly.

A sharp blade I actually use Elmer's Glue to set the fibers in place and do a little push/pull to get the glue to fill the gap between the hole and the strand. A final clear coat will make them a bit more flush, too.

I did all the color splotches in red and gray. The gray was pretty much gunship straight from the bottle and the red was a mix of rust and international orange.

I did go back in with camo gray on the engine section. 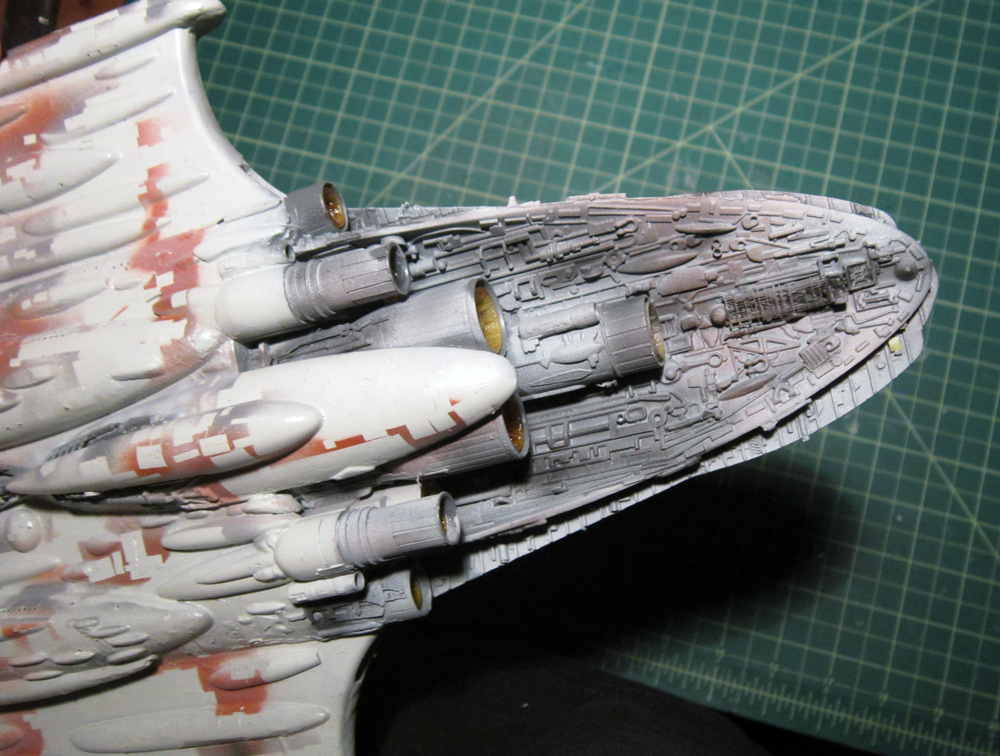 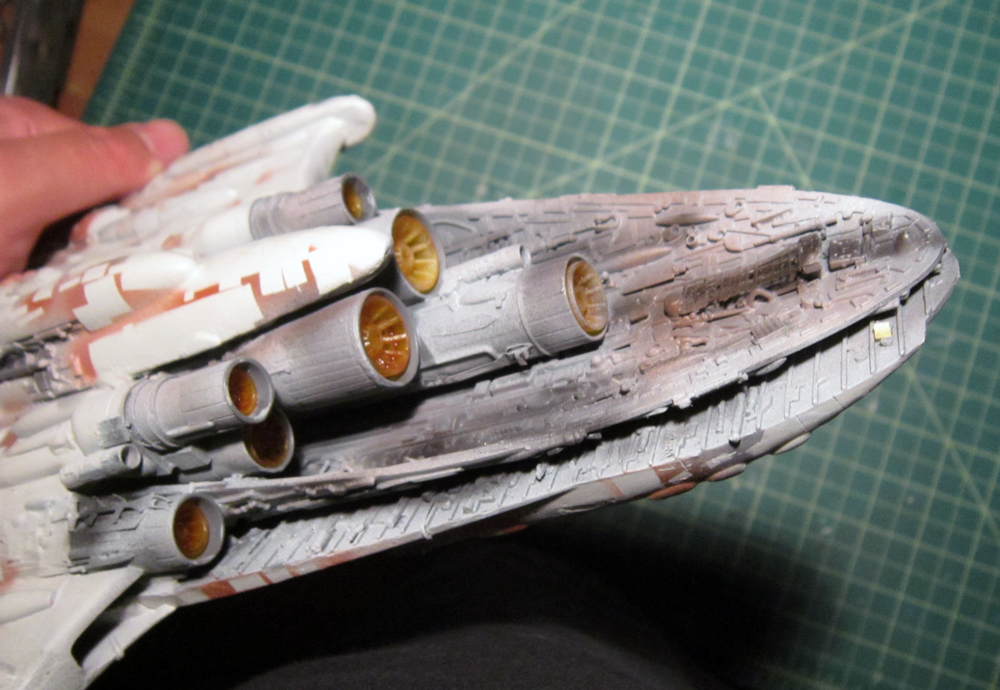 I also went over some of the gray areas with a gray/black mix to do a little gradient. Everything turned out super bold so I hit the whole thing with a misting of camo gray for blending. The fibers were then trimmed. 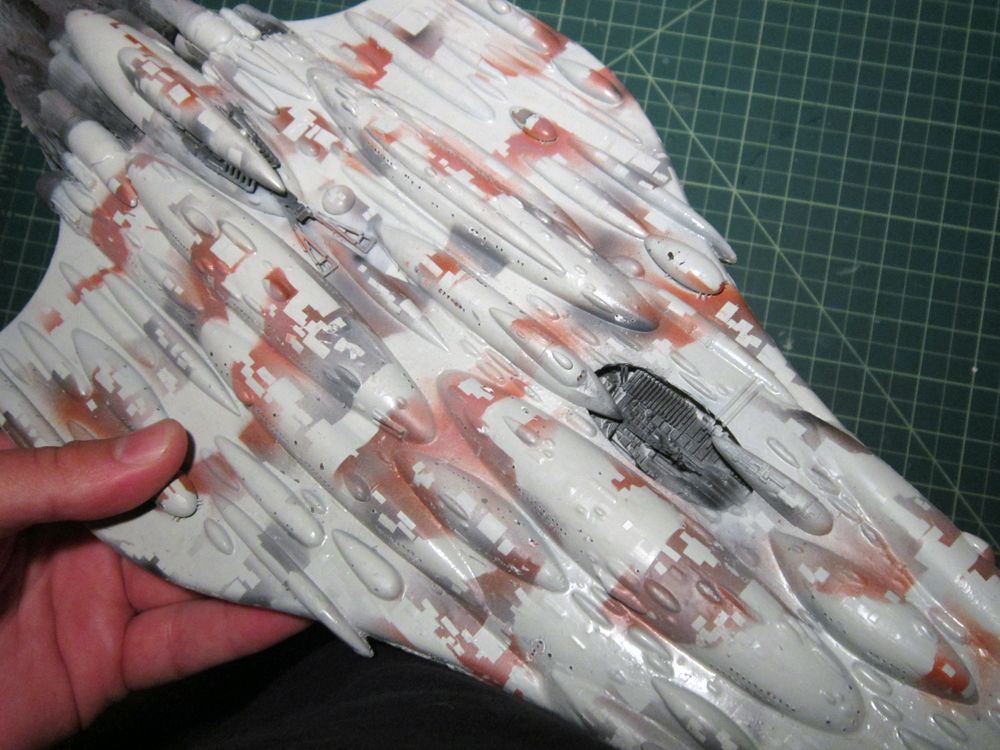 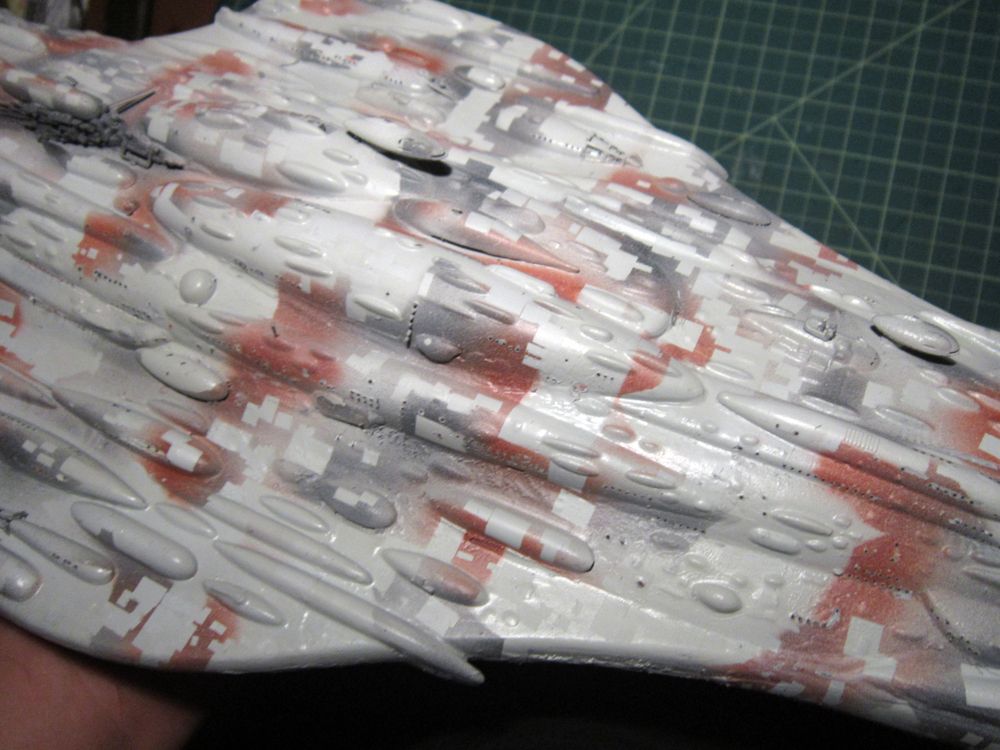 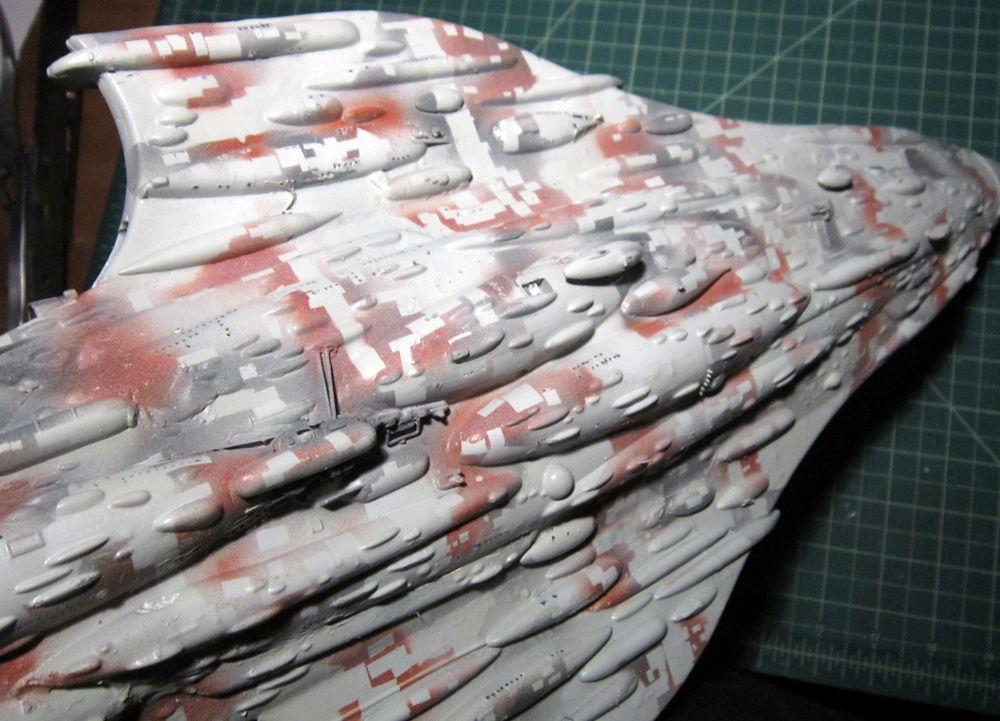 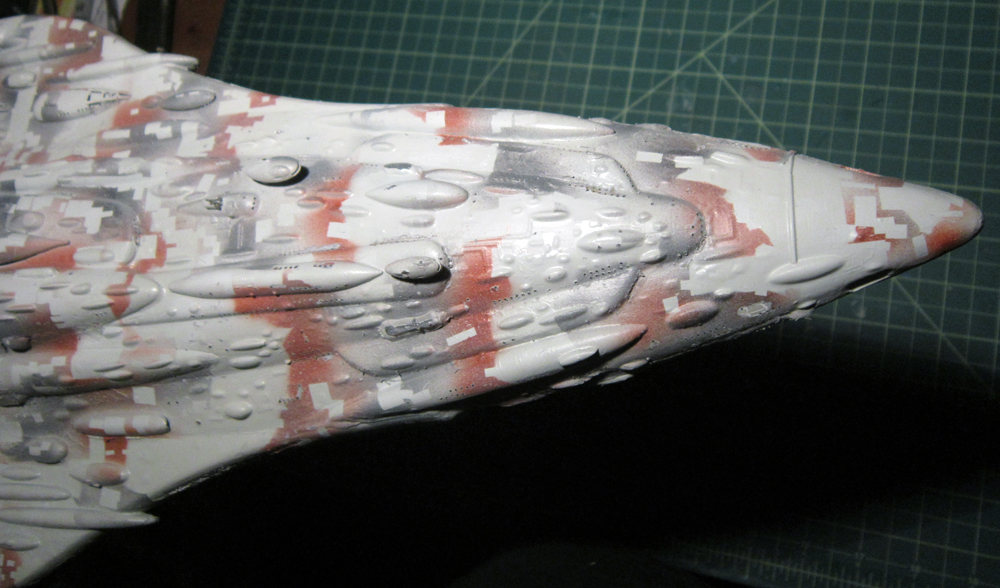 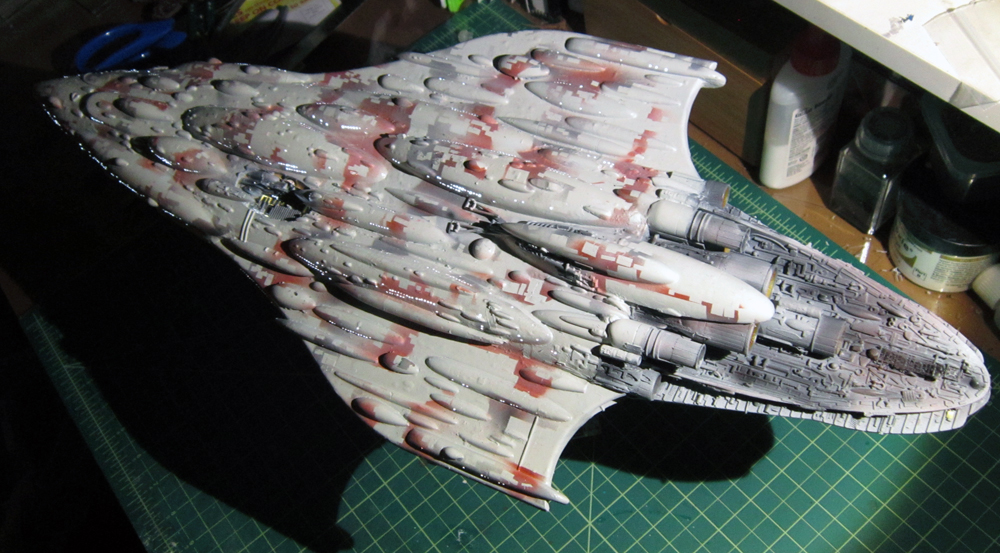 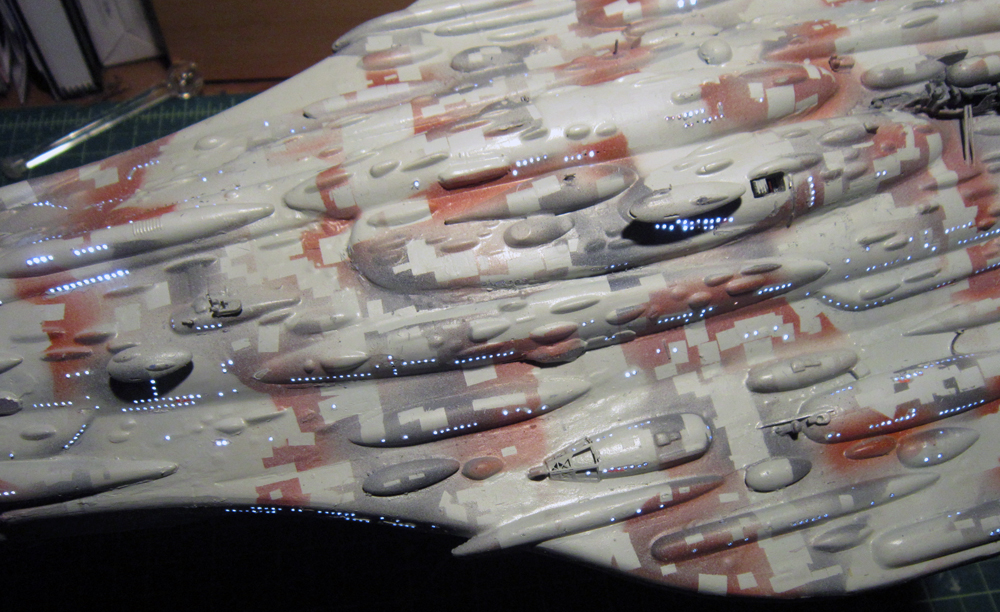 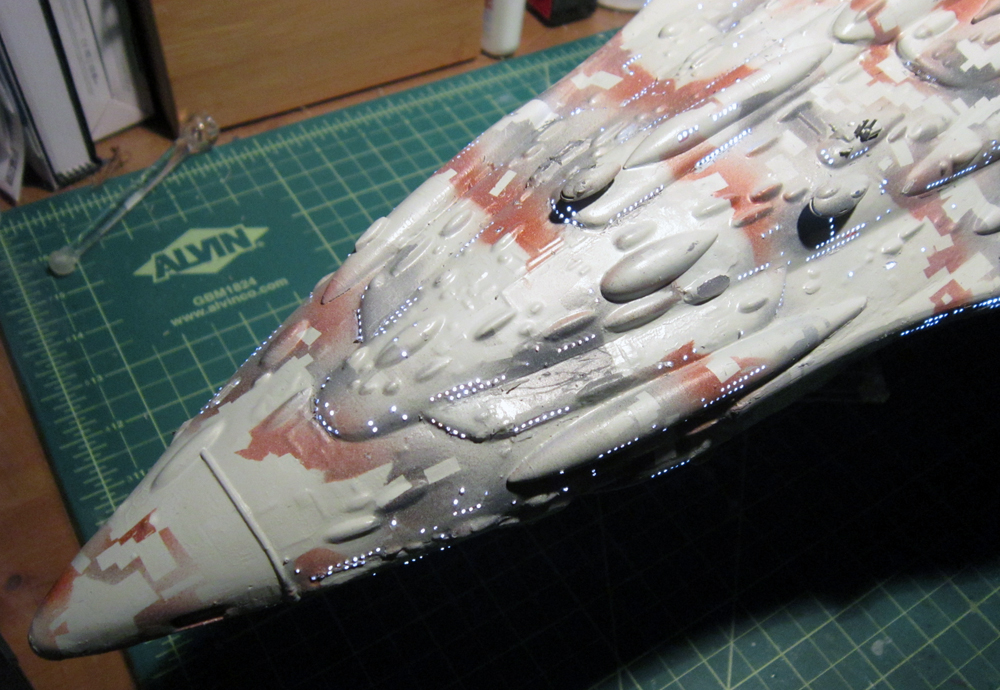 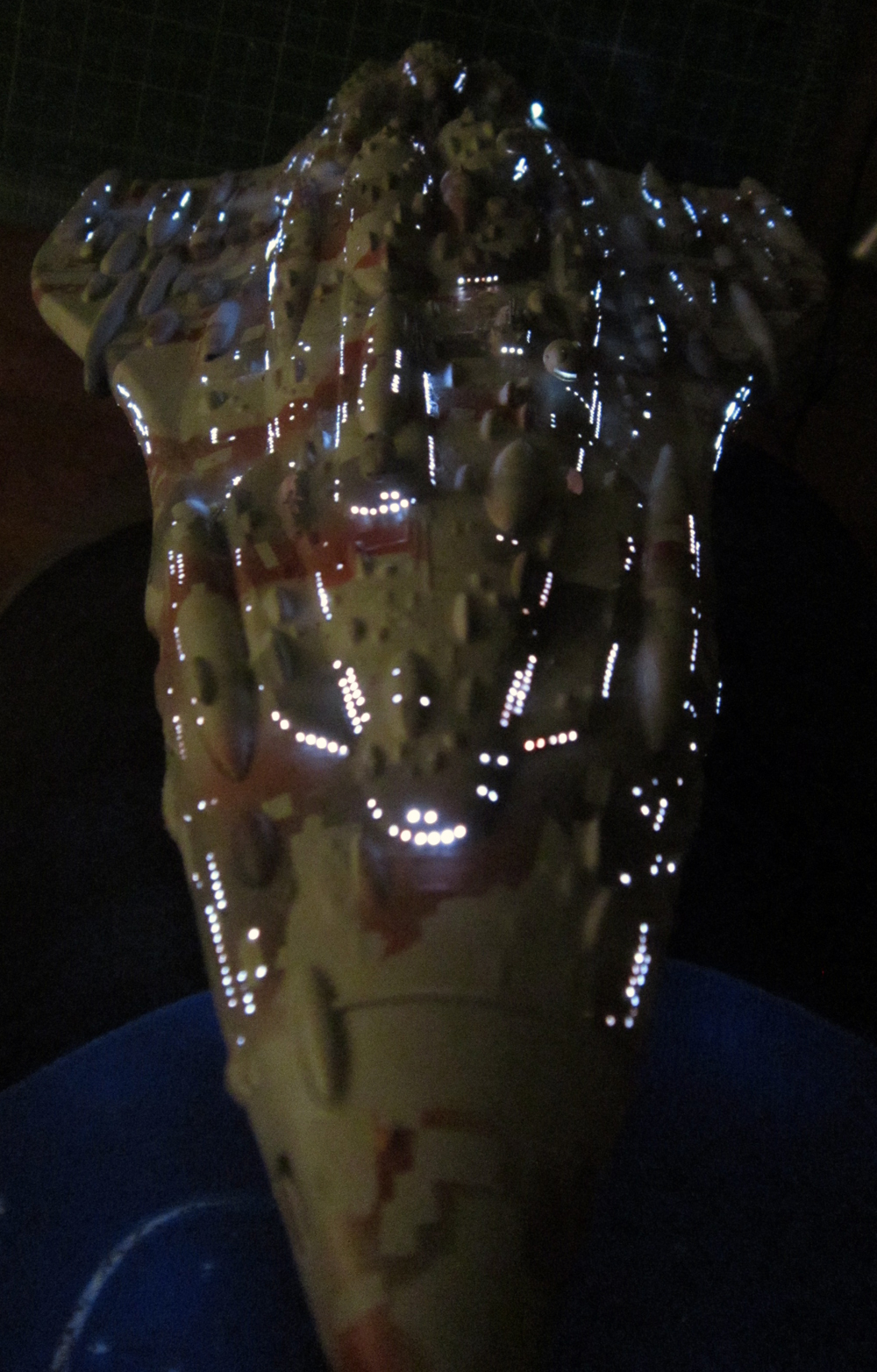 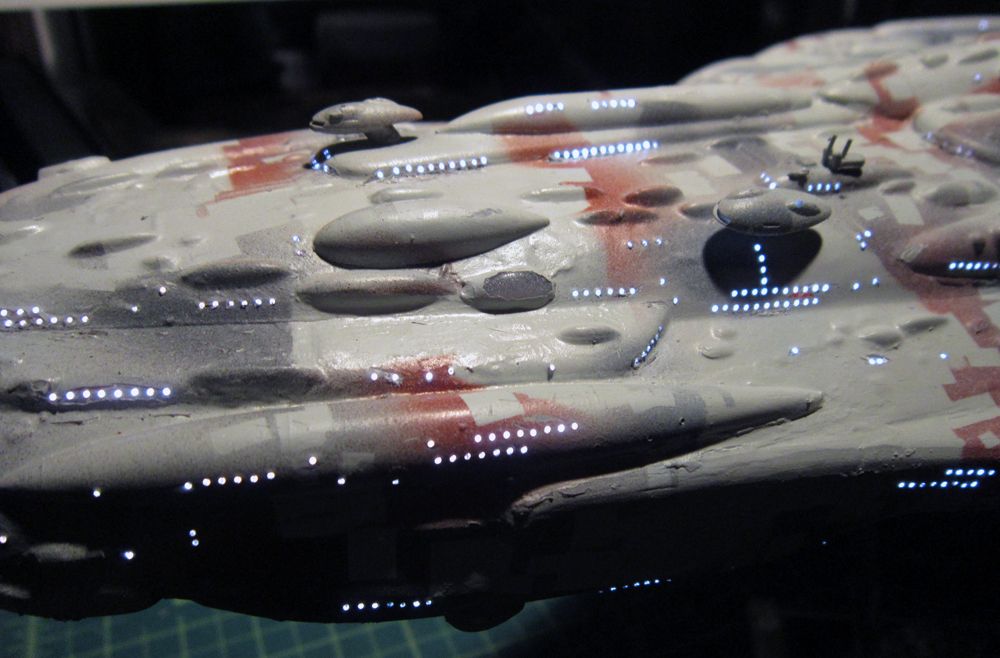 Next up is possible â€œmedical cruiserâ€ decals, detail painting, pencil lines for paneling, weathering and of course a clear coat.

Thanks man! That means a lot coming from Mr. First Place!!!

I thought you had me Nick I really did! I said to my girlfriend "thats what I'm up against.." lol

Did you see the numbers though?? You were miles ahead!! ;D

Numbers? I looked at the views....

Scott put the poll pages back up
http://www.scalemodeladdict.com/index.php/topic,6500.0.html

So here's a question for you all....Since I've put WAY more windows on this than the studio model, I'm considering it to be either the PRE-Rebellion Luxury Liner version, which is also a POST-Empire retro-fit version...OR a medical cruiser version which is another known conversion for it (OT and EU).

If it's the Luxury Liner version, do you think it needs some more markings a la airliner style? Like a red or blue stripe down the sides or something?

But if it's going to be medical, something like a red stripe wrapping the bow or something similar? Thoughts?

I'd keep it without the stripes personally but whatever you choose will make it look great (it already does).

Here's kinda what I was thinking

I'd go for the last one, more subtle.

Yip, I'd say medical too.