If your Grandfather/Father/ Yourself served for your respective country, let me first say thank you for your service. I was raised/still being raised in a family where everything is earned, and its the same for freedom in one's country. Freedom is bought with brave men/woman's blood sweet and tears. If you every want to make a veterans day happy, when you see them, thank them for their service. This past weekend i had the rare opportunities to here my Grandfather's war stories. My grandfather flew for the United States Air Force, he flew over 300 combat mission in South and North Vietnam, as well as in Laos. He was explaining some of the ordinance that he had dropped, like 500, 1000, and 2000 pound bombs. As well as cluster bombs and napalm. He also was telling us about his flight to Hanoi, and how he could bomb actual targets and not just a bunch of monkeys and trees. He was also telling us how they would train to be out of the rack, and in the cockpit within 5 mins. He was telling us that someone in his squadron had flown an entire combat mission in his underwear. I really enjoyed that time of combat stories, and if you have a relative who has served it would be a good idea to get their stories recorded 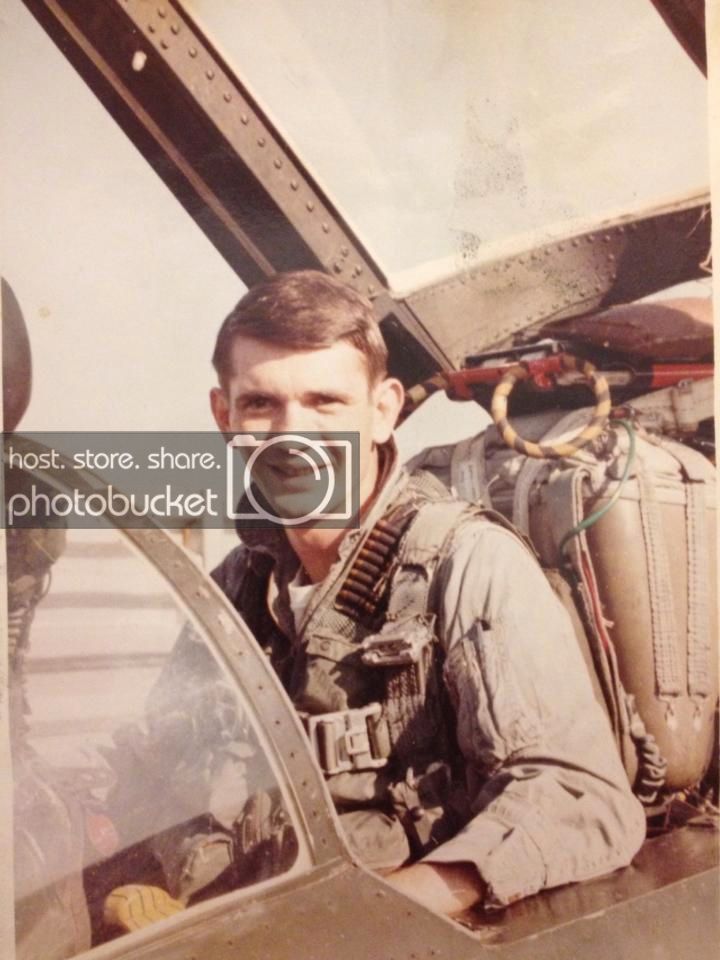 Very cool I love hearing stories from vets. Looks like he flew a F-105 I always wanted to be a pilot myself but that wasn't in the cards I did serve as a Infantryman here in Canada. I always loved working along side of the U.S. military and playing with the toys they have. My highlight was when I was talking with a UH-1 gunship pilot he realized pretty quick my love for aircraft and as I was on some downtime he took me up with him and I got to have fun firing the weapons off it was great. I would love to sit and hear your Grandfather's war stories. I came from a family of military people myself my uncle was on the HMS Hood when she sank.

He actually flew the F-4 Phantom B,C,D varients. But he did also fly air cover for the 105s

I am at the moment trying to prove the movements of my late grandad during WW2.

He was a cook in the regular British Army from 1941 -1946 and was a vet of D-Day+4. We know his movements through his service record, but there is a period in 1945-46 that is proving extremely difficult to prove.

During this time, there was a detachment of what is now known as MI6, called the "Special Communications Unit" or S.C.U.

Now this is where it gets interesting......I've been in touch with the head curator at Bletchley park, (you know, that place in England where the Enigma Coding Machine was cracked? and not by the crew of U-571, or what Hollywood wants you to believe), and even he cannot prove the existence of this unit. Yet we have unit stamps on his service record.

The other really interesting thing is that through stories, we are aware that he was one of the first detachments to witness the horrors of Bergen-Belsen, yet there is no documentation of this. I don't think he was lying, because when Remembrance Sunday came round, I know he had vivid nightmares of the ordeal. He would never really speak of he experiences, only his experiences of passing through Paris, and the fact he was court marshaled TWICE for misplacing his rifle...the second time was not his fault, and he exacted his revenge of the person who hid it.....but that's a different sotry

wow interesting story Mikey_W_1980 where abouts are you located. I am in Canada and we have lots of vets here that served along side the British maybe I can find something out for you

Based in the UK Arohk. If you can find out anything, I'd be very very surprised. but please feel free to ask by all means.

I do have family, all-be-it distant from Ontario...my nan's cousin was a tail gunner and flew in Halifax's over the North Sea hitting targets in Scandinavia.

I've not heard from them in a long time, so I suspect he has long since passed. Sad really as I loved hearing about his stories flying out of his base in Lincolnshire

Incidentally, whilst uncovering my grandad's service record, medals and various paraphernalia, we uncovered a silk handkerchief with a map of S.E Asia, and what appears to be the service record of his brother. Now he served aboard HMS Ajax.

Trying to find a crew list and any serving sailor with the surname of Body. However, looking at the deployment records of HMS Ajax, I'm not sure if it ties in? I'll need to dig out the documents and take another look.