Having not much else to do I decided to pull this one from the stash. I'll be building it with the Tamiya PE set to replace the cut-it-yourself mesh and for the nice seat-belts, hood pins and other accessories. I'll be painting it in likely either black or metallic black. The kit is nice, but many parts are riddled with push pin marks, especially the round parts. You can kinda see all the sanding I had to do to remove the ones from the exhaust. I used styrene rod to fill in the holes on the belt and then puttied over it. No painting yet and the exhaust parts still need to be cleaned up and assembled.
[Steps 1-3]

Good to see you diving in there Soarin, Nice choice too . Remember ,the hobby is about fun ,not worrying

Ohh very nice this will be interesting.
N

The episode of Top Gear where they review this beast will probably help in the detailing, as well as add some entertainment value too! Following in the footsteps of the F40 and the Enzo, I'm looking forward to your take on Ferrari's latest and most driveable 'undriveable' supercar!

That was a fun episode

The FXX is just a modified Enzo. The Tamiya kits share a lot of the same parts. I'd rather have an Evo X over a Ferrari any day. ;D

Not much progress today. Just cleaned up and assembled the exhaust. Here is an unpainted engine mock-up.


I'd rather have an Evo X over a Ferrari any day
Click to expand...

Have that kit here somewhere as well. Yeah pretty much the FXX was the sort of street legal racing version of the Enzo. I say sort of, because if you were one of the lucky few to own one, you had to be a previous or current Ferrari owner, and not just any old Ferrari would do, you had to be one that owned one of the higher end Ferraris, like the Enzo and similar even to be considered to have Ferrari "allow" you to own one. Oh....and if you want to drive it....then you are more than welcome to travel to Modena, and "borrow" YOUR car from the Ferrari garage to drive around their track, and put it back when you are done....no joy riding around town!! LOL

Originally there were 29 cars built for a cool $1.8million each. A 30th Special version was built and presented to then World Champ Michael Schumacher when he retired from F1 racing. His is the only one that isn't white on red or red on white (it is black, no stripes), and the only one of the 30 that was allowed to be taken away from the track in Modena, when he showed up as the Stig on Top Gear and brought along his FXX to do a power lap around the Top Gear track (blistering the track record by about 74 seconds I believe), but was disallowed as he ran on slick (IE not street legal) tires, and all the vehicles on their powerboard have to be street legal. Even at that, they figured that street legal tires would have maybe added 3-4 seconds to his time, and would have still blistered the track record.

Steps 4 and 5 deal with the rear and front brakes. The brakes have a nicely detailed front rotor, but solid plastic on the side and nothing on the back. Steps 6 and 7 are construction of the monocoque and detailing of it and adding the engine. Both the front and the rear wheels are supposed to be able to move.
[Steps 4-7]

Making nice progress there Soarin Look forward to seeing all the bits come together .

Id love to get one of these kits some day... the real car too.

Yeah, I remember building a Ferrari F40 large scale kit (1/12?) back in my younger days... looked to have about the same amount of detail.

Didn't the one on 'Top Gear' have a natural carbon fiber colour?

i think it was mat black but i could be wrong

The black FXX on Top Gear is Michael Schumacher's. You can find pictures of it online. The car contains a lot of carbon fiber, but the body is painted gloss black. 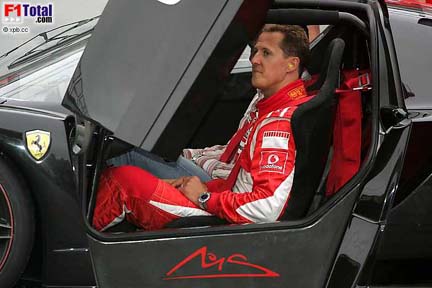 I'm cheap and don't feel like messing with decals, so the carbon fiber areas on mine will be painted black. I've also considered using metallic black since I'll probably paint mine black as well, but with the white kit decals.

I've started to paint the parts I have assembled so far. I'm using Tamiya acrylics, including the metallics, almost exclusively so it will take several thin coats and there won't be any progress shots for awhile. I just bought some new cheap brushes too.

With the holidays and next semester approaching I'm putting this on hiatus until spring/summer. See you then!

Hardly. xD I'll be busy and bored to tears at school.

Ok ..guess we'll have to wait then ;D

In the meantime I'll start finalizing some of the details of GBs later in the year on another forum and making banners for them. I will likely bring a couple of tanks with me to uni to work on and post progress here. Just building and no painting, though.
You must log in or register to reply here.
Share:
Reddit Pinterest Tumblr WhatsApp Email Link