I had a sculpted bust of Popeye. My guess is that the sculptor was going for a 'What would he look like if he was a real person?'
He was pretty cheap when I got him at one of the NJ cons a year or two ago. Really looking it over I know why. It's pretty crude. As usual I forgot to take a before pic.
Both the sculpting and the casting is only fair at best. For instance instead of wrinkles, there's gouges in his face that make him look like a slasher victim. Then there's the problem of him having only one eyebrow sculpted in. Next is his sailor hat. Popeye didn't wear the typical hat, he worn more of a Cap'ns cap. 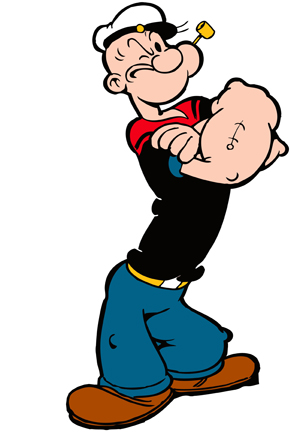 Ok, I can see that to avoid any copyrights problems. The next one can go into that category too. He didn't have an anchor sewn onto his shirt. The anchor was a tattoo on his arm. If it were me I would have just left it off (but I'm not about to start grinding it off). Then there's the thing of having fingerprints and some kind of mechanical marks on the sculpt. Dude, get rid of the marks. Lastly is the face has a look like he should have his corncob pipe hanging out of his mouth only -- no pipe. I'll have to scratch build that.

Onto the casting. Bubbles everywhere. Being that on a 1 to 10 this kit is a 4 at best, I didn't bother doing anything to fix it - just primed him up and started painting. Here's where I am so far.
I figure I have another hour or three to put into it -- 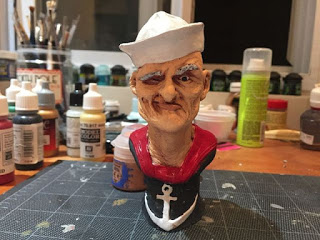 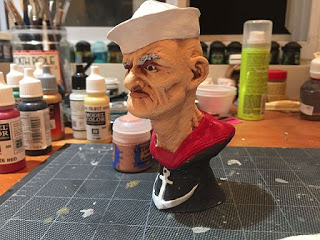 Thanks for looking. ;D

Definitely an odd sculpt.
Looks more like the Robin Williams live action version from forever ago