I have recently started trying to learn how to pin wash the models I build. I bought some cheap oil base paints and mineral spirits from Walmart to help get me started. Well I mixed black paint with the MS and it turned gray. Is that normal? Could someone help me to better understand how to properly pin wash please?

Was it gray or just really thinned out? I use Schminke-Mussini oils, and I've never seen mineral spirits change the color of the paints.

I moved from using oils for washes to using acrylics, too. I use my smallest brush, to keep the amount to a minimum, but dip it in the thinned paint mixture, then apply it into the relief and let it flow.

You are better off getting a reasonable quality oil paint ,the cheap ones can be very grainy and dont break down to well , I also use white spirit to thin .
On the other hand you could get some Ak Interactives products which take all the hassle out of it

Thanks Chris. I did buy some cheap stuff from Walmart. It was only like $7.00 for a pack of 12. I did notice that during the mixing stage it did look really grainy and it even felt like sand or something was in it. Something told me not to buy it but I did. Trial and error right lol. I did see a pack of oil paint brand that said Georgia or something on it and it cost a good bit more. I may try that and see what happens.

I think you might have a bad batch of thinner, too. I have never seen mineral spirits as anything but clear, out of the can or bottle. If you clean your brushes in a jar of it, the liquid will be cloudy, till the particles of pigment settle out, but then the liquid will be clear again. Same goes for a batch of wash that you might make-if you put the thinner in a jar, add some paint and stir, it'll become opaque and the color of the paint, but if you let it sit long enough, the pigment will settle to the bottom and the liquid will be clear.

I don't usually pooh-pooh Walmart, because I buy some supplies there, too, like my primer, but I usually buy my mineral spirits at the hardware store. The stuff you get at Walmart should be of similar quality, but beware of something that is really cheap, because it might be really cheap.

As far as the oils go, yeah, I'd look for oils at a craft store, at least, like Michael's, AC Moore or HobbyLobby, or at an art supplier, like Dick Blick. It's worth it to pay for top-grade oils, because they will last you a long time, and as Chris noted, the cheaper oils have pigments that are more coarsely ground than the higher-end oils do. Same goes for acrylics, by the way. I have some craft store acrylics, which are OK from some applications, but their pigments are so coarsely ground that they're not very good for things like painting a uniform in 54mm.

Hope that all helps!
Brad
S

Nah, it wasn't a bad batch.

There is an 'eco friendly analog' type of odorless mineral spirit that is cloudy/milky in color.


link to the stuff 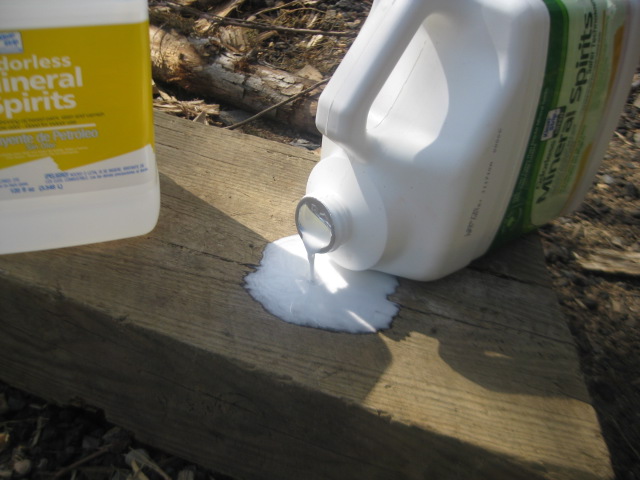 If you're dead set on using Oils, Abteilung and Mig have nice sets you can snag on ebay for cheap. If you just want a wash that performs well, Id go with AK interactive's product. In the long run, you'll prob save money. Be mindful though that AK is a laquer style product and behave differently. Also, get some Low-Odor Mineral spirits from Lowes. The big $20 can will last nearly a lifetime

There is an 'eco friendly analog' type of odorless mineral spirit that is cloudy/milky in color.


link to the stuff

The other day I purchased some Mona Lisa mineral spirits and a lamp black color oil paint that was around $6 at micheals. I have to say the batch came out great. I also bought some soft pastels to use for pigments because no store around here sells any form of pigments. I really believe now that because I used cheap stuff, I got what I bought. I am confident in this wash mixture now using the good stuff. Thanks for all of your comments and help. Always a pleasure.

Pastels are very useful. I have chalk pastels, a set of earth tones, so, a range from a yellow with a tinge of brown, through various browns and tans to dark brown, and black. I use them for things like exhaust staining on aircraft and vehicles, and I have also mixed ground pastel chalks with a couple of drops of dishwashing liquid or white glue, and applied it to vehicles to replicate dried and not-so-dried mud.
Share:
Reddit Pinterest Tumblr WhatsApp Email Share Link