Many of us during building dioramas, vignettes or simple bases for our models want to make them more interesting. Additional points of interest attract more attention and enliven the scenes. Additional parts like military and civilian equipment, plant live and animals are now produced by many modeling companies. Mantis Miniatures from Poland is one of those companies which have entire range of animals in their offer.
That range includs all kind of Animals live from all around the world, including sea life. All of these sets are packed in standard Mantis box with box-art photo showing painted set. 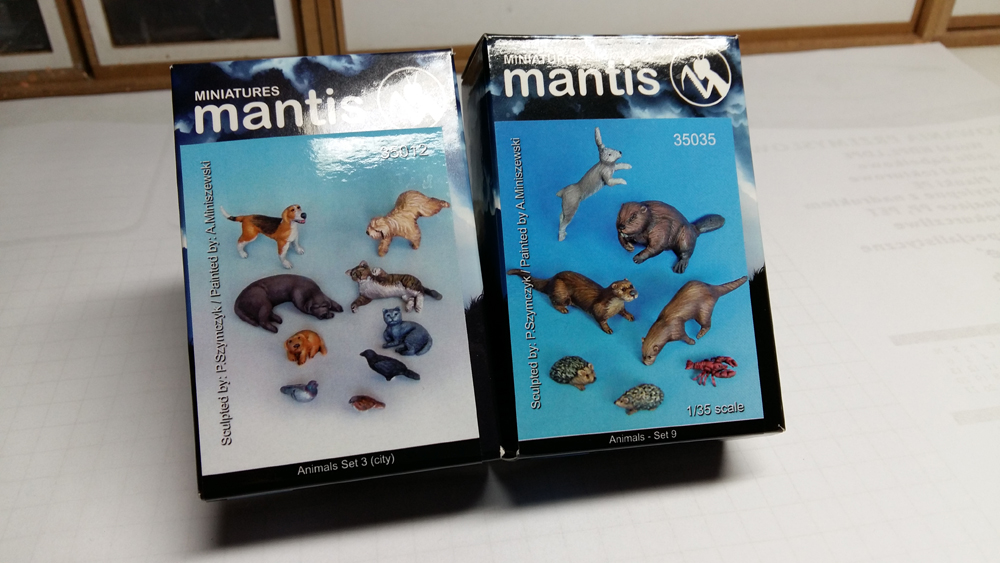 Inside we find elements cast in grey resin. Most of the animals are casted in one piece. Mold lines are almost nonexistent. We need to prepare the elements just like a standard resin product and it doesnâ€™t take long to do it.

In Animals Set 3 (City) number 35012 we will find Animals typical for city environment. It doesnâ€™t mean that we cannot use them and set in different surroundings. In this set there are four dogs, two cats in different poses and three different types of birds. 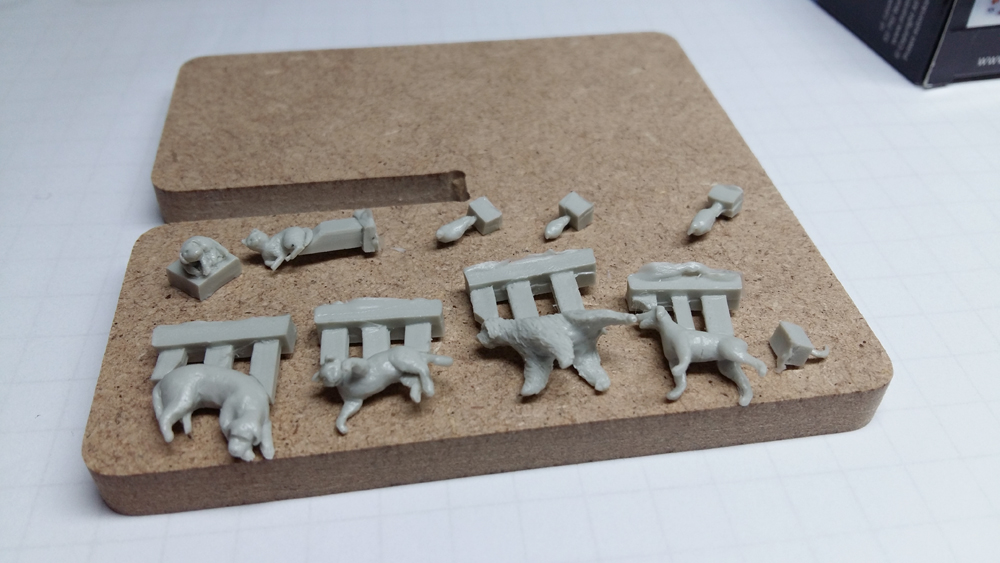 Animals from Animals Set 9 number 35035 will fit ideally in forest. We will find in it rabbit, beaver and two weasels, hedgehogs and cancers. 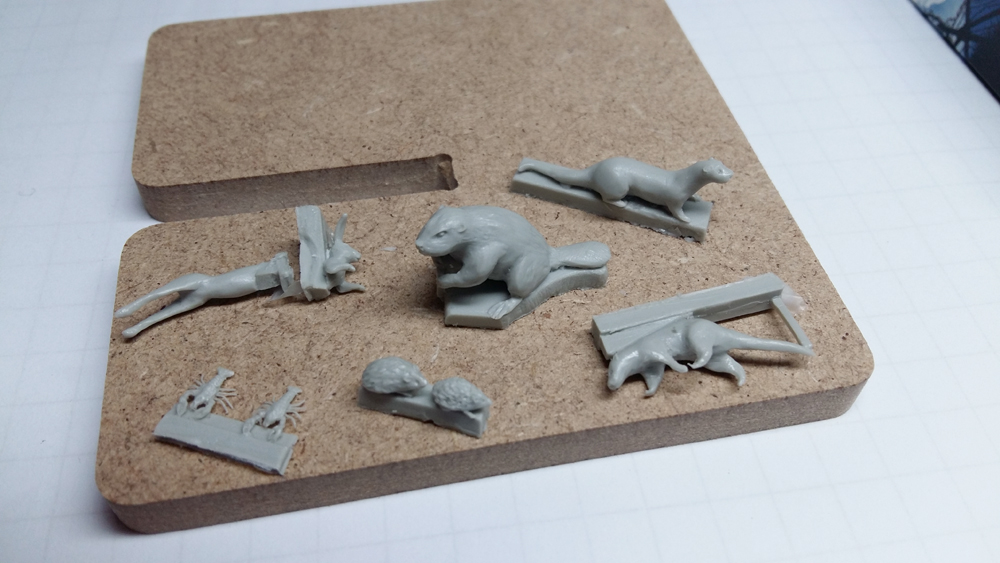 Animals Set 13 number 35071 is different than others. Except leftovers of horse or gazelle there are two hyenas and vultures in different poses. There is additional very interesting small scorpion. 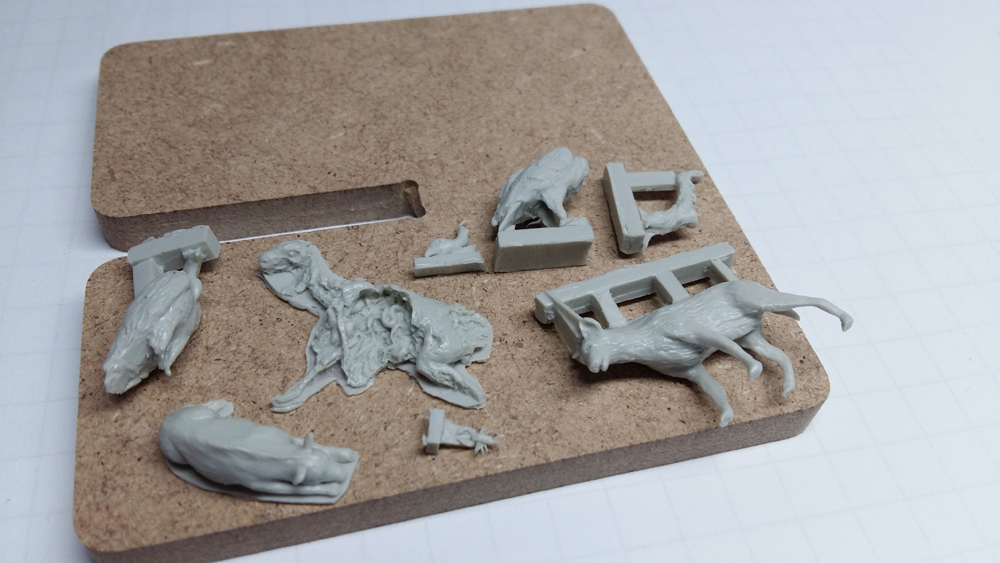 Another set worth the attention is Animals Set 10 number 35039. It consists of twelve rats. In and on bullsâ€™ skull, in German gasmask container, on helmet, in a shoe and in different postures allowing for placement according to our need. 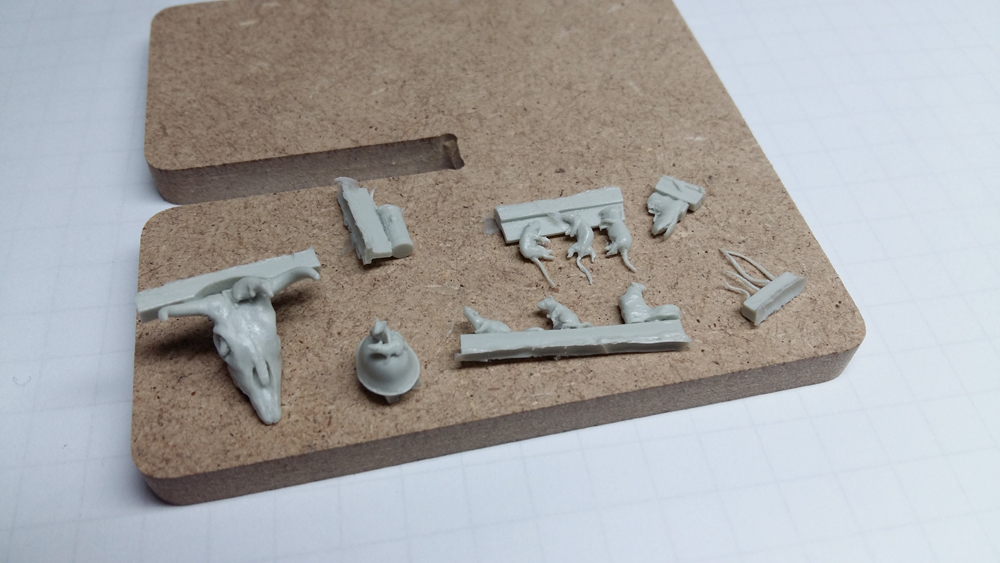 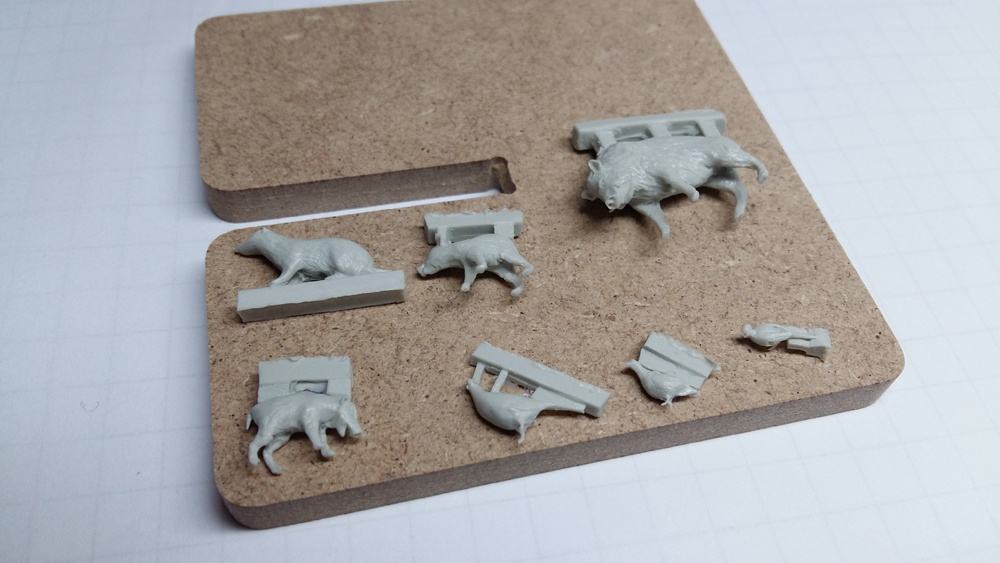 Next very interesting set is Animals Set 16 number 35063. Inside we find two herding dogs, three sheep and a ram. They are ideal for a peaceful scene in which they will surely be noticeable. 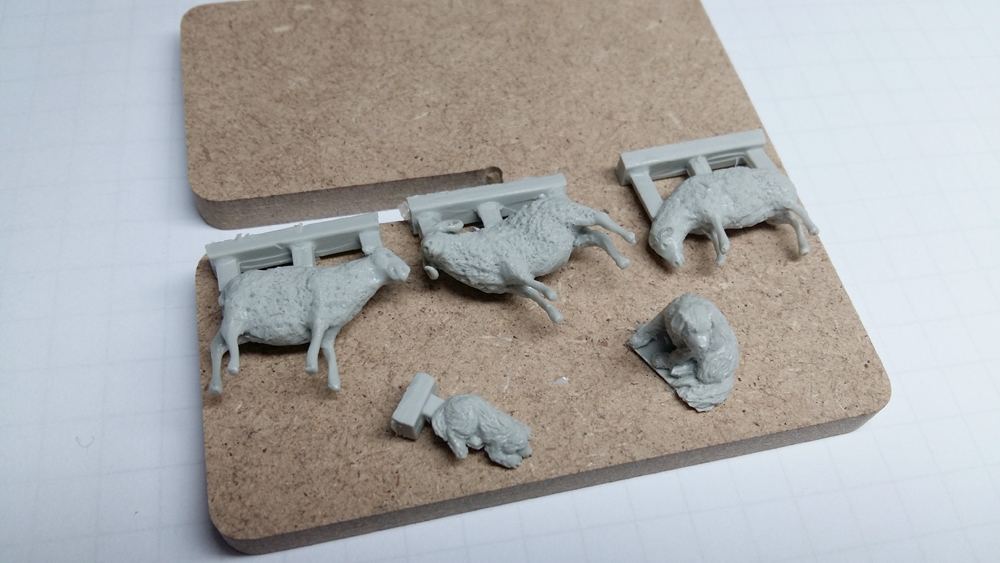 Dogs from Animals Set 17 number 35067 will also be a great addition to a diorama or for a single figure with base. Adult dogs have interesting poses; one is on his rear legs allowing to put him against a figure or an object with his front ones. Second one is taking care of his physiological need. Third looks like he wants to play. There are also four small or young dogs. Two in German helmets, one playing with a mitt and one gnawing on a bone. 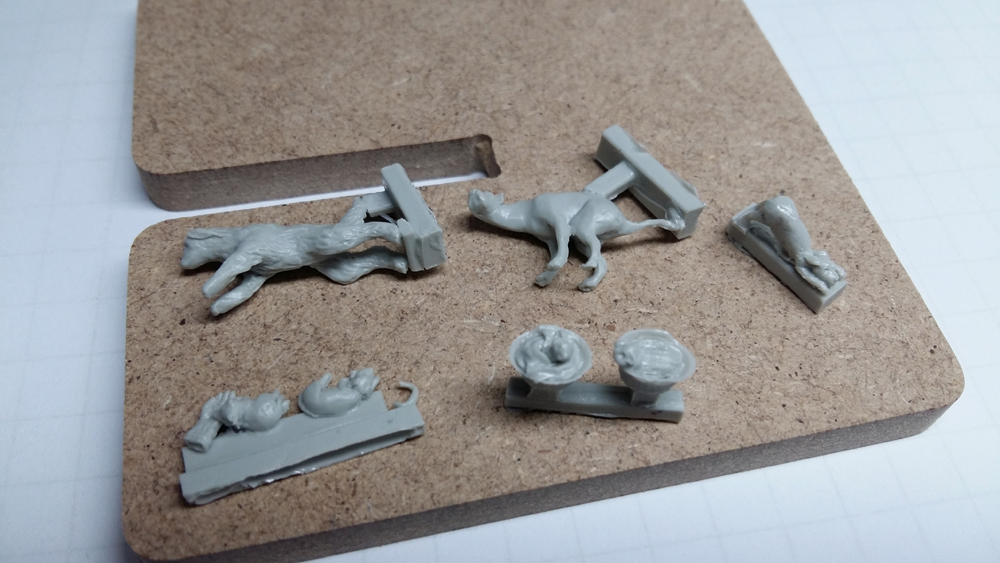 If we need forest animals typical for Europe than Animals Set 2 (European) number 35009 is ideal. Inside there is a stork, fox, beaver, owl, frog, two toads and two squirrels. 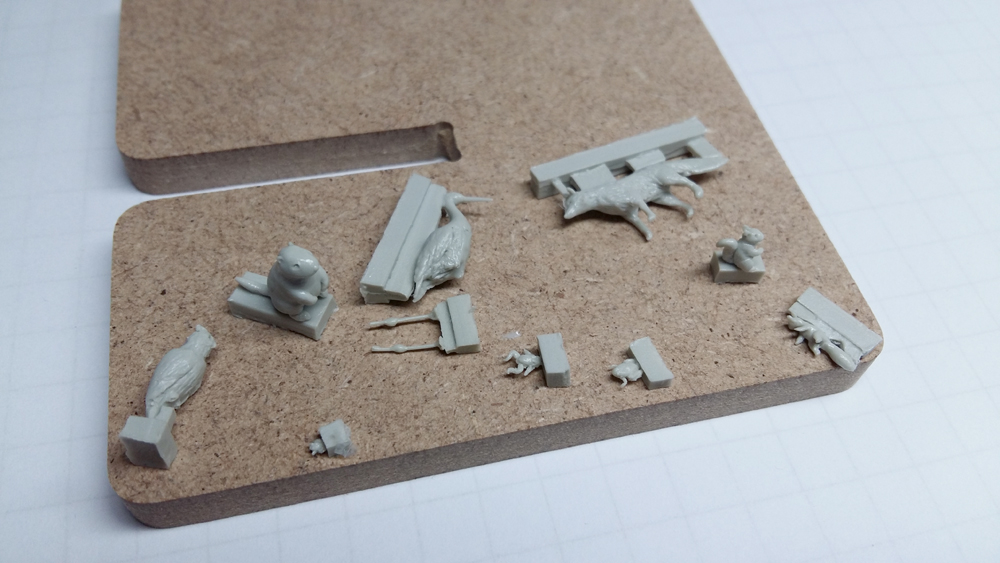 For darker surroundings like cave, cellar or dark attic bats will be great. In Animals Set 18 number 35071 we will find two sets of those. Each one consists of two flying ones, two sleeping and two hanging upside down. 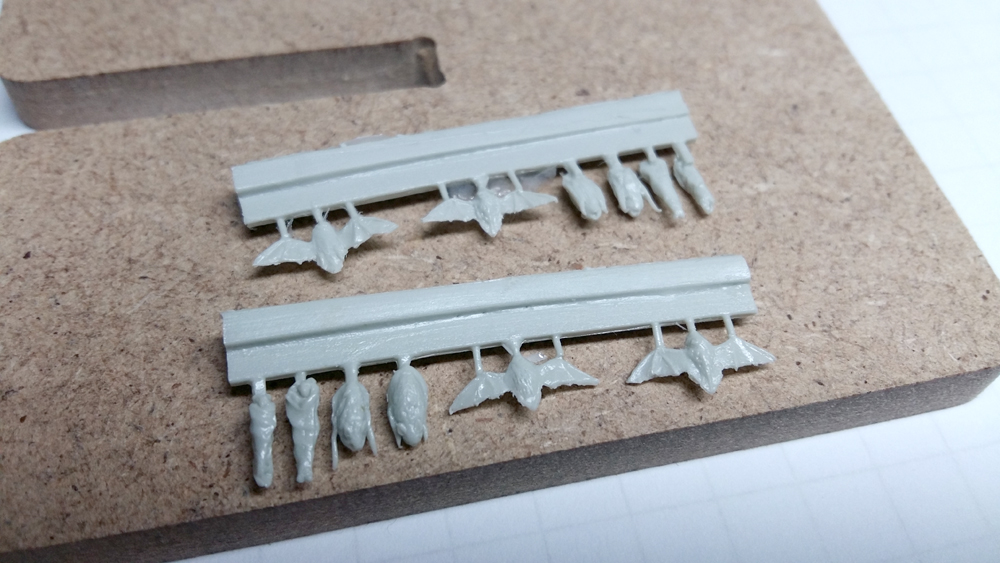 If you are a fan of bears than Animals Set 8 number 35031 is just the thing for you. One big brown bear with two little cubs, arenâ€™t maybe that popular. But they will fit nicely in an ancient or medieval scene. 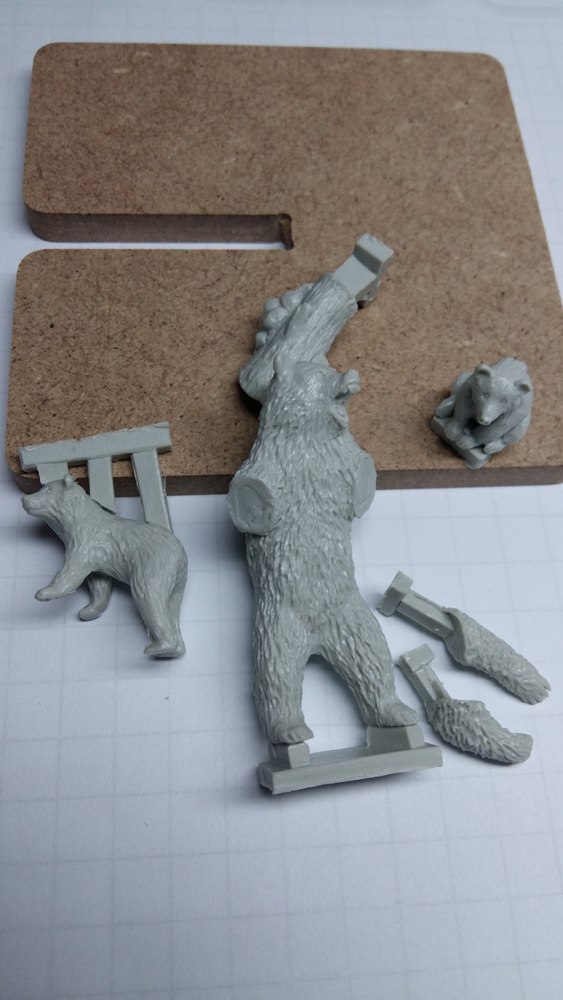 Less cheerful is Animals Set 19 number 35071. All thou this set is more versatile in regards of the period, but itâ€™s for more tragic scenes. It consists of all kinds of carcasses of different animals, like horse, dog, birds and a skull of some kind of mammal. 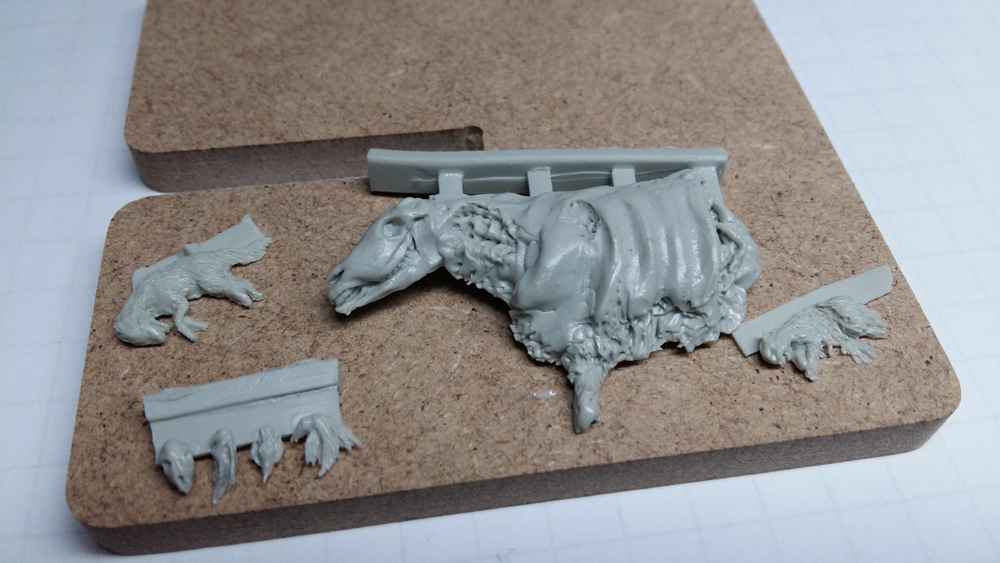 If you need rural animals than Animals Set 6 (Country) number 35024 is the answer. In it we will find goat, cat, goose, hens, rabbits and mice. 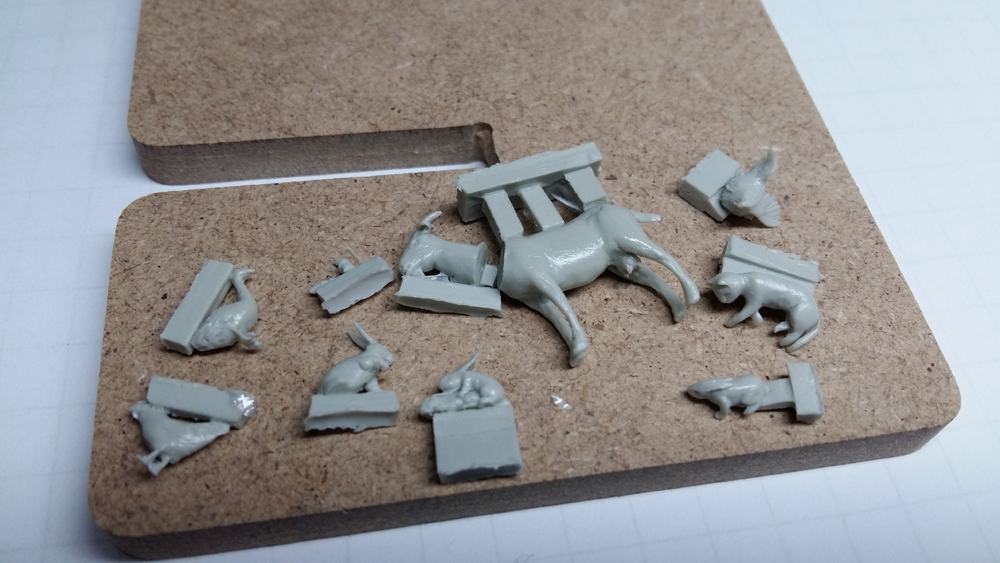 Last set which I would like to present is Animals Set 21 number 35080. There are all kind of food products and a broom on which there are mice. Itâ€™s great two all kind of indoor and outdoor scenes. You can either use one piece to enrich your base or you can use them for a separate story of their own. 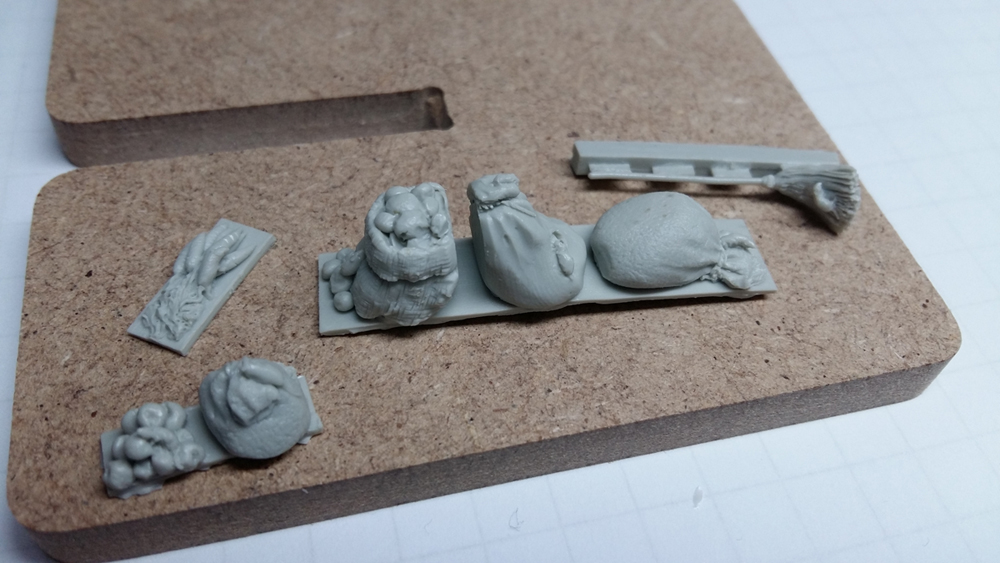 Mantis Miniatures company adds new sets to their offer all the time. So it is worth brows thru their site on which we will surely find the set that will fit our need. I highly recommend and encourage to use animals in modeling projects. They are additional focal points and also an interesting addition for the viewers of our work.

That's the most comprehensive collection I've ever seen . Impressive