Lando's Falcon- One Year Before 'Solo'

The Story:
This build is a different take on the Falcon as we saw it in the film 'Solo', this is the unfinished state the ship was in a year before we saw it. A lot of this is based on how I understand the character Lando Calrissian. Lando has two obsessions, gambling and appearance. When he got his hands on the Falcon it already had some history and looked a bit too rough for him. While he was having it's engines overhauled the search started for the exterior cladding used for the passenger editions of the YT series. Being budget minded the exterior panels came from different seven ships which had been scrapped and were being stripped for parts. As long as they were intact he was fine- after all the work was done he planned on giving the rebuilt ship a gleaming paint job. Lando was not much of an engineer but he knew who to hire to do the needed mechanical work. After he had been stranded on a trip due to a passenger ship's breakdown for four weeks he never wanted to face that problem again. What was not in good condition was replaced with new parts, still gleaming from the factory.Being stranded before also led him to the most expensive and to him the most important modification- a small escape craft. The YT-1300 series had available a rather rare option- the YT-Dart. Use of this was relegated to mostly the passenger editions of the YT series since it severely limited the usefulness of the mandibles and cargo ability, but he really was not that interested in using the Falcon for hauling stuff for others. Even rarer was a Dart with a small hyperdrive- only a few were produced. Lando could not believe his good fortune when he came across a YT-Dart which not only had the hyperdrive but had actually been used to escape a disaster.. A YT-1300-P named "Horizon's Gold", a ship fitted out as a gambling recreation transport, had a catastrophic failure of it's main drive. The crew and passengers were able to get to the Dart in time and had just pulled away when the ship blew. The escape craft had been just at the edge of the blast but everyone was uninjured and the Dart used it's hyperdrive to get to safety. In Lando's mind this was the most perfect addition to his ship- it not only was a proven craft but was incredibly lucky as well.
My build shows the Falcon about one year before 'Solo' Lando has the interior mostly done, the major mechanical work has been completed and it is on it's way to be fitted with a new dish and weaponry for the upper and lower turrets. It is still missing a couple of body panels ans one set landing gear hatches.

The Build:
I figured there were enough kits built to match the film and quite honestly I found Lando's version a bit bland in it's clean whiteness. I worked on the assumption from studying the ship (mostly the engineering deck and mandibles) the exterior panels were placed over the original hull so I cut a couple of them away. It may upset some people out there, but for showing the hull beneath the panels I sacrificed the Fine Molds Falcon I had been working on. I had done most of the prepainting on it when Bandai released their 1:144 kit and after that all I could see was what Fine Molds had not gotten quite right (I am a big fan of the five footer) By wonderful coincidence the smaller Fine Mold's hull was the exact size and shape to fit inside the Bandai kit hull with the panel lines matching. I also used one of the Fine Mild's landing gear feet to show in the exposed well opening since the Lando Falcon did not have any gear of it's own.This build still needs a few minor tweets of weathering before I will totally happy with it but I did want to share this now. 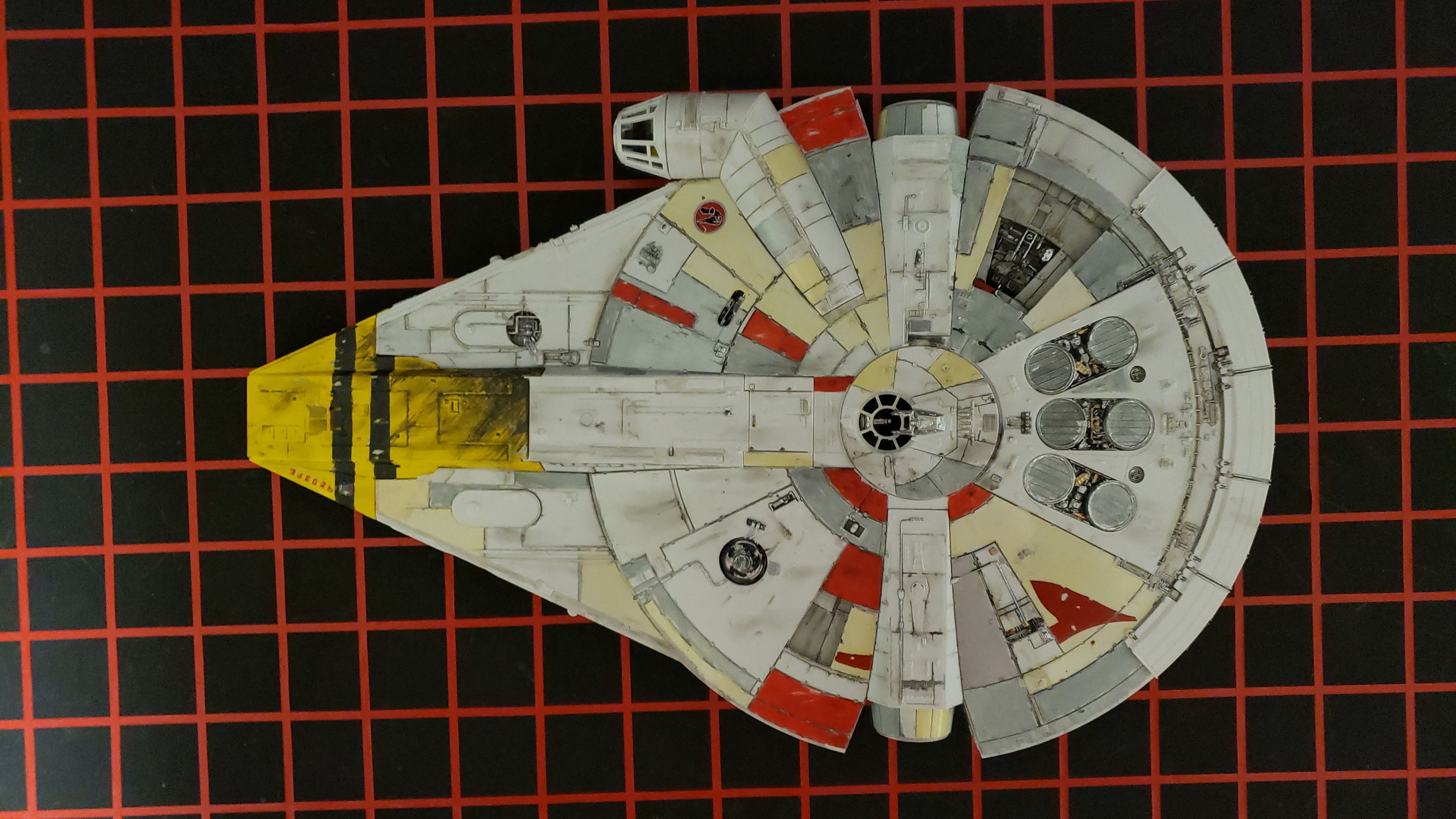 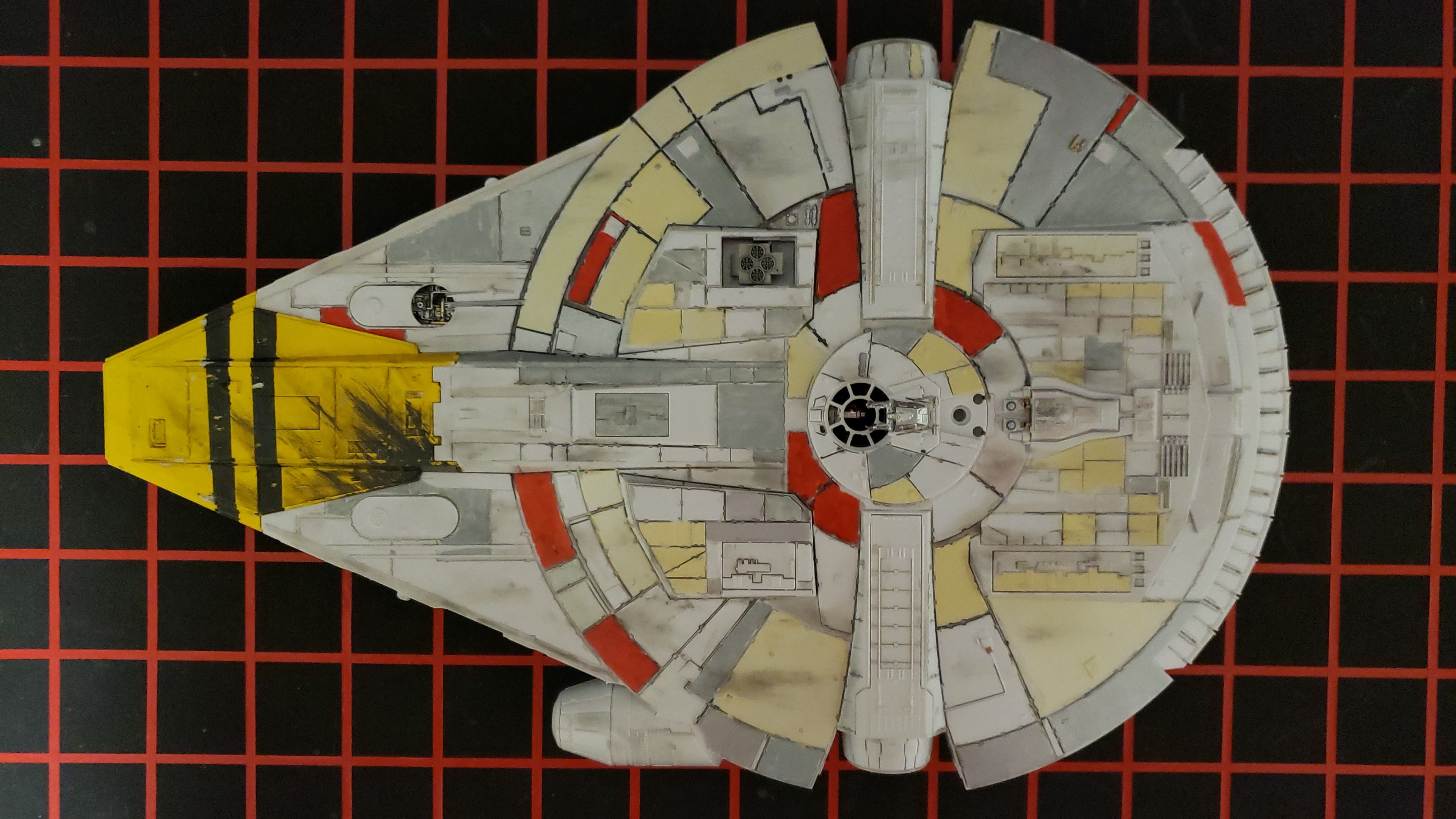 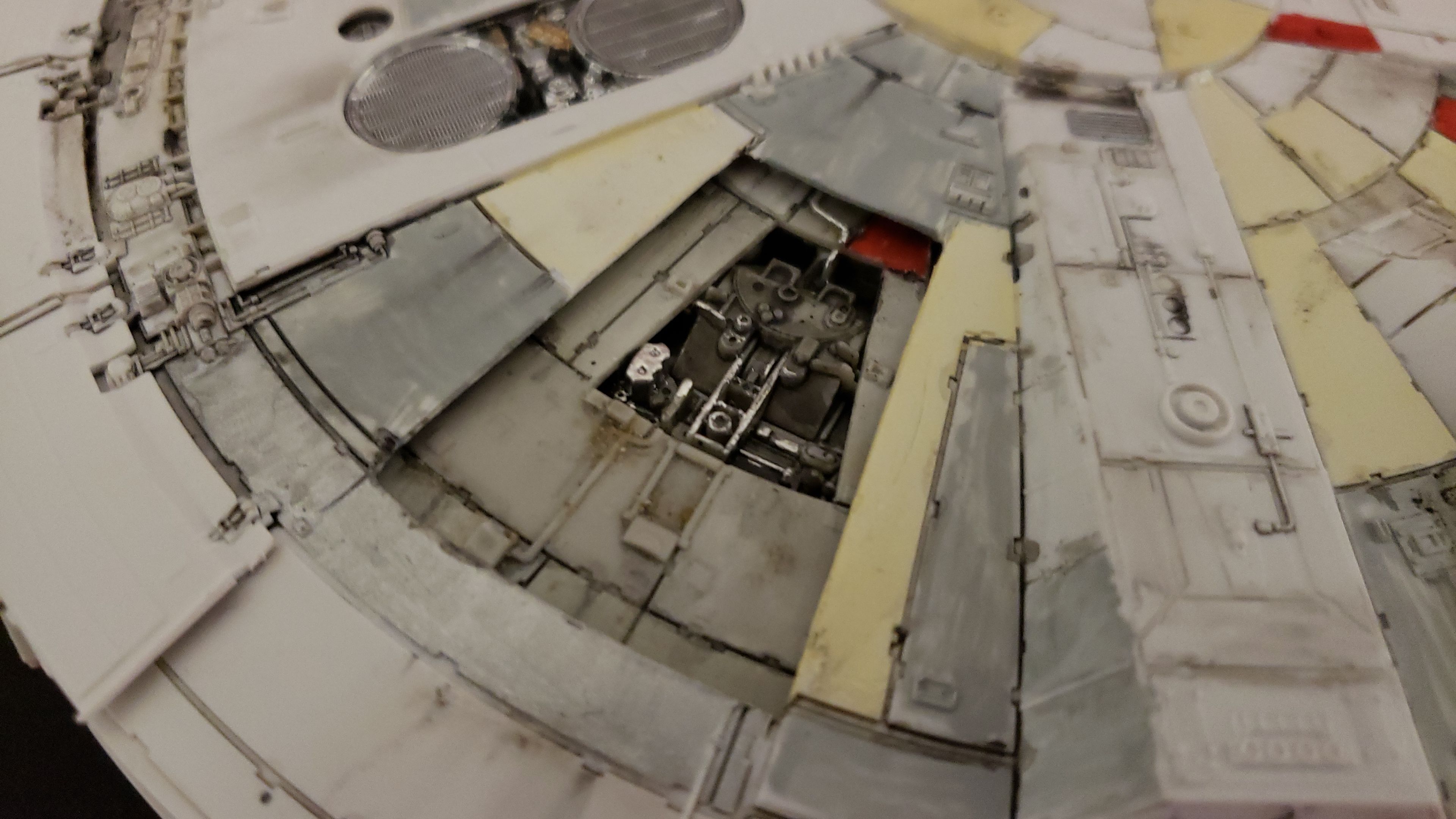 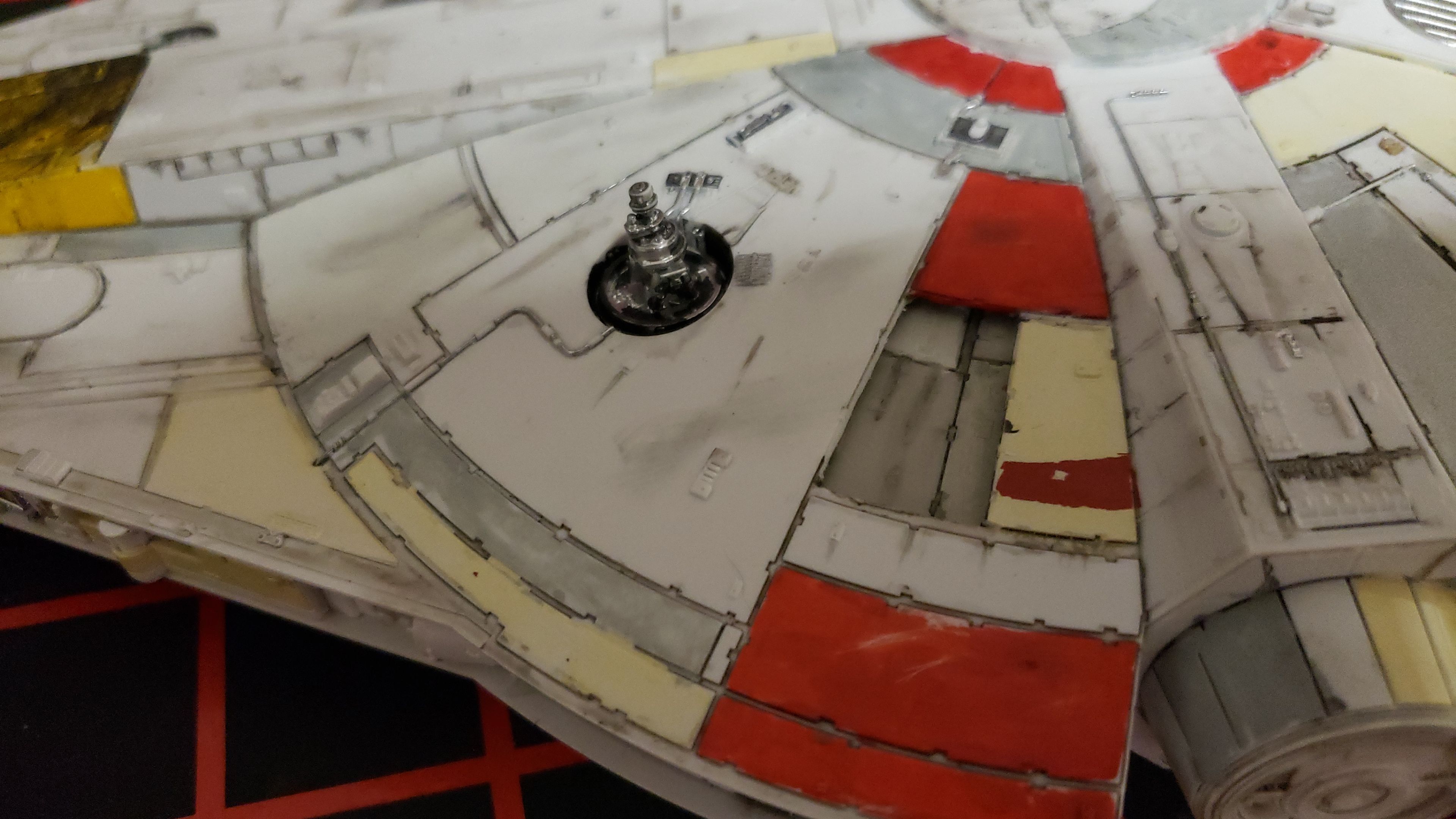 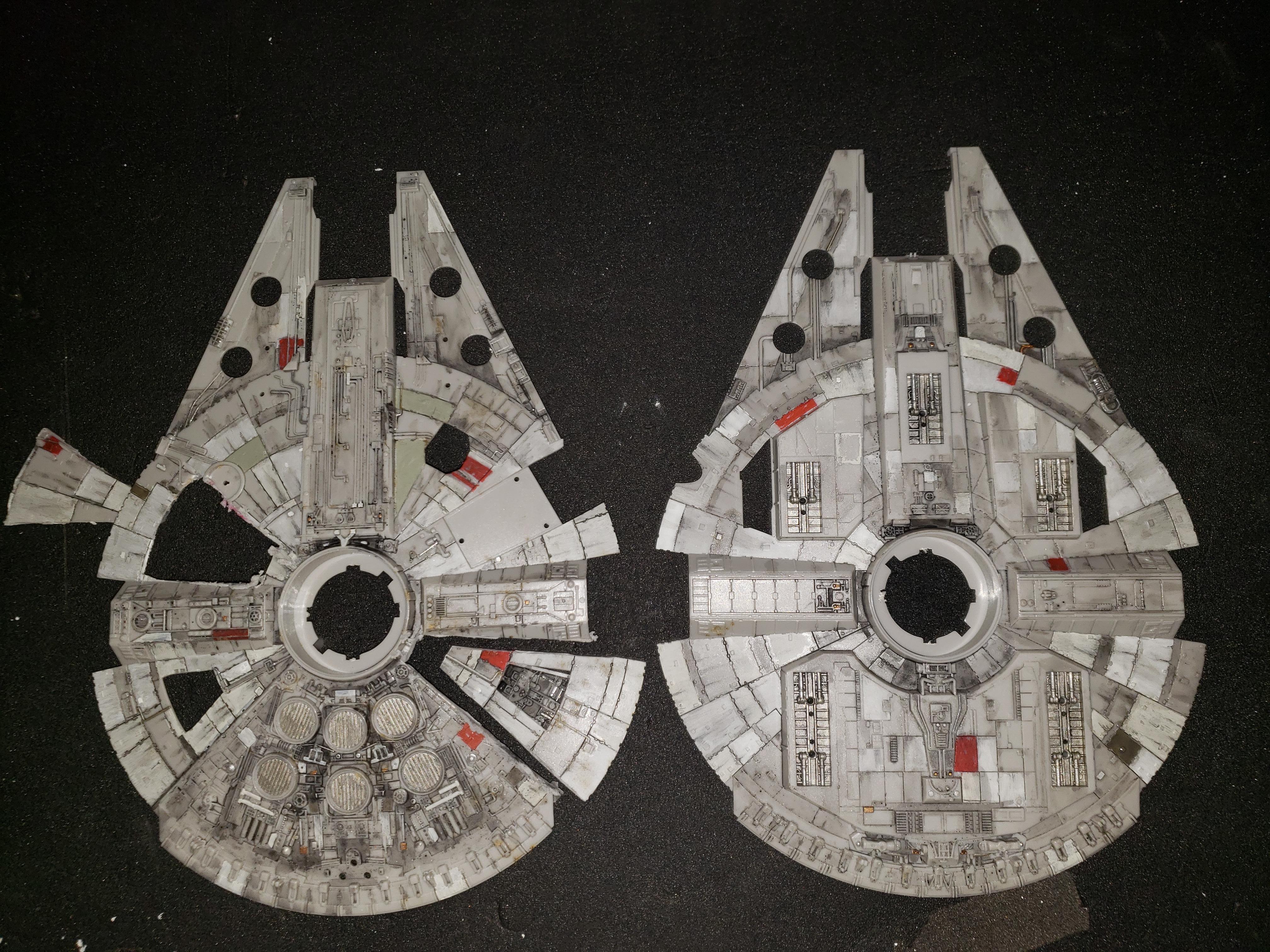 Here are some final photos of my Lando's Falcon project. I have added some tiny markings decals and redid some of the weathering. My goal is to show used parts with different histories but all were the source ships were mostly taken care of- these were passenger ships and not junk freighters with scattered blaster holes.
Once Lando gets the last few panels in place and fits it out with the dish and defense guns, off it goes to the finishing shop for the White with Blue trim paint job. 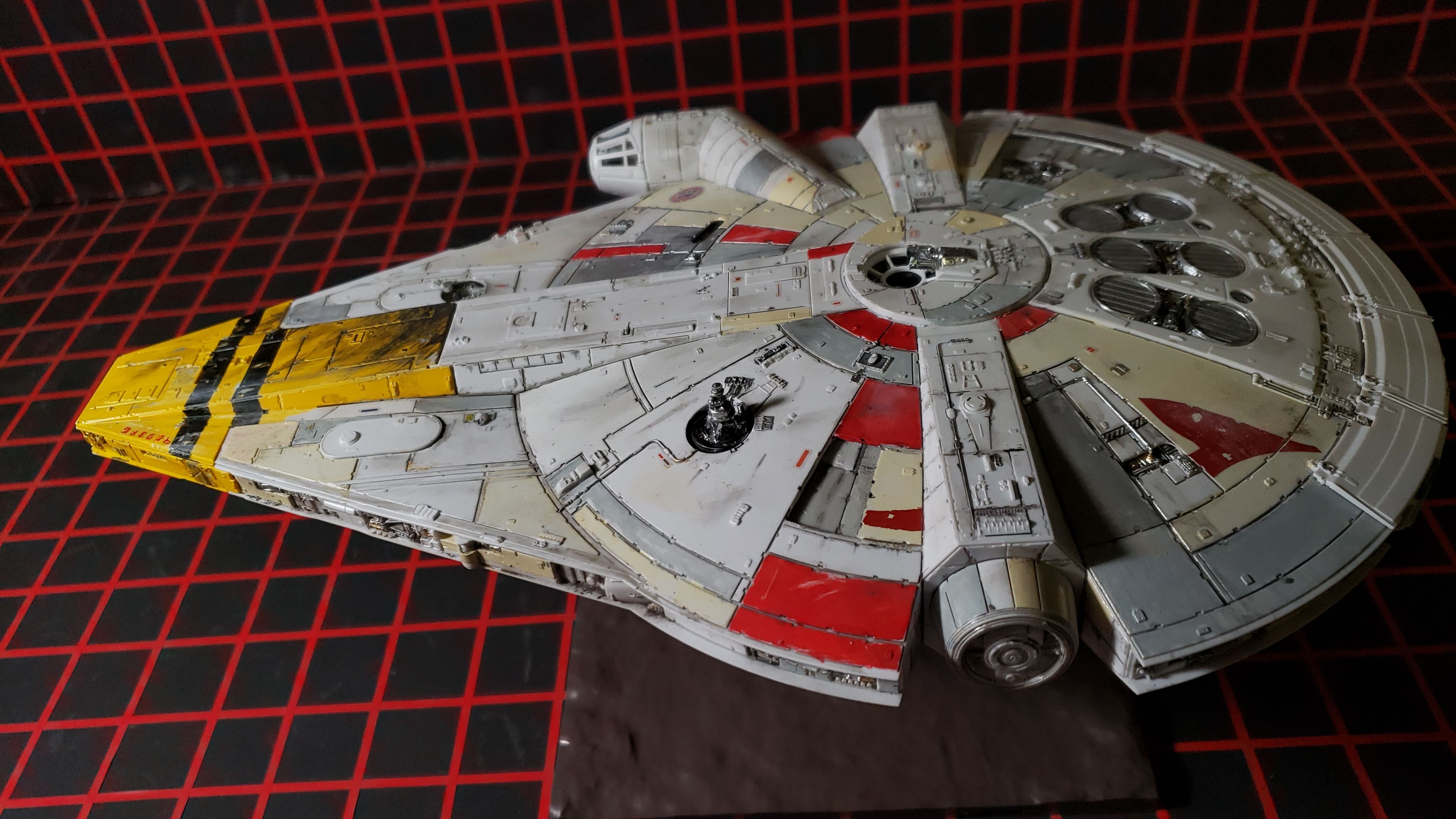 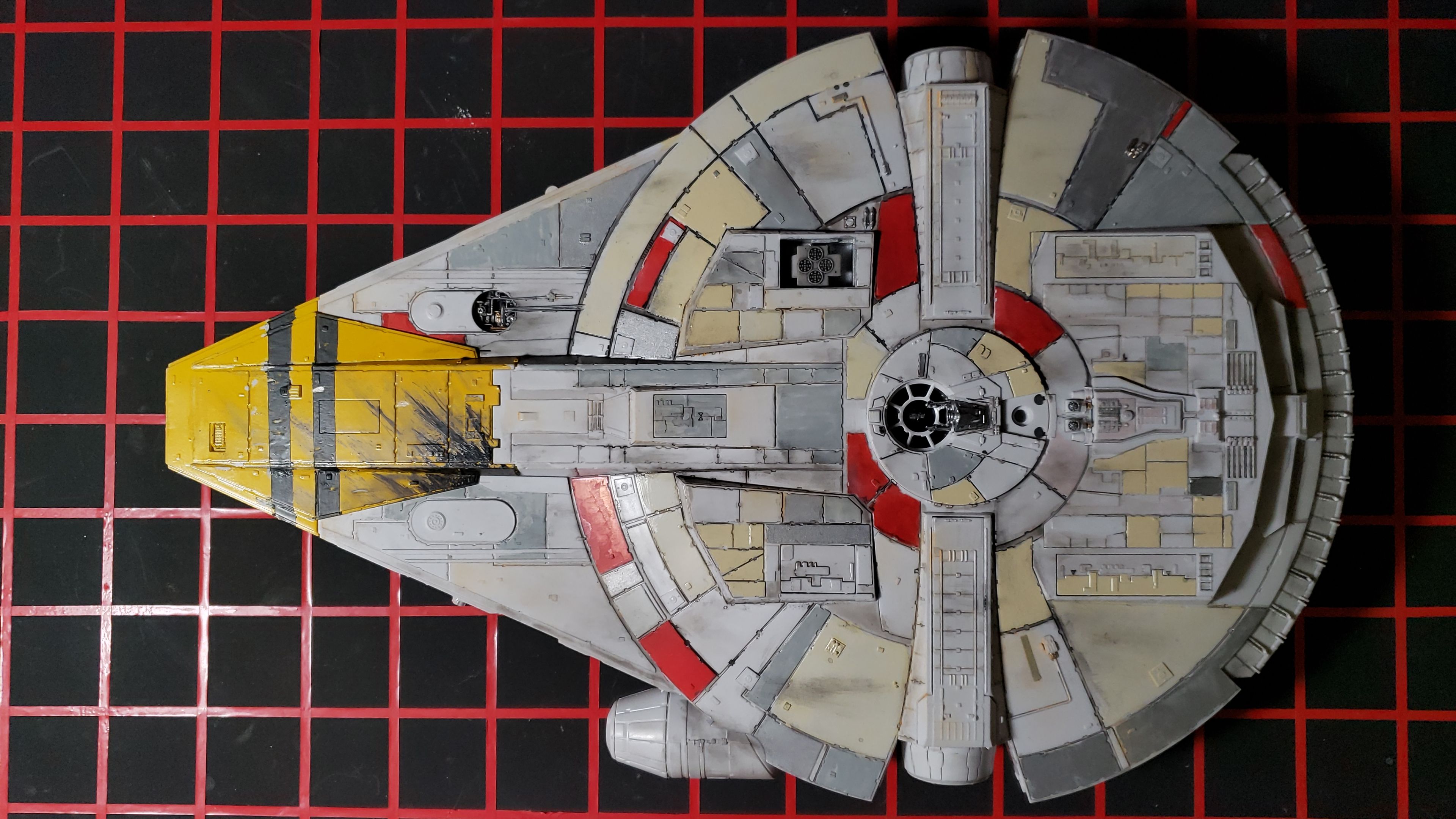 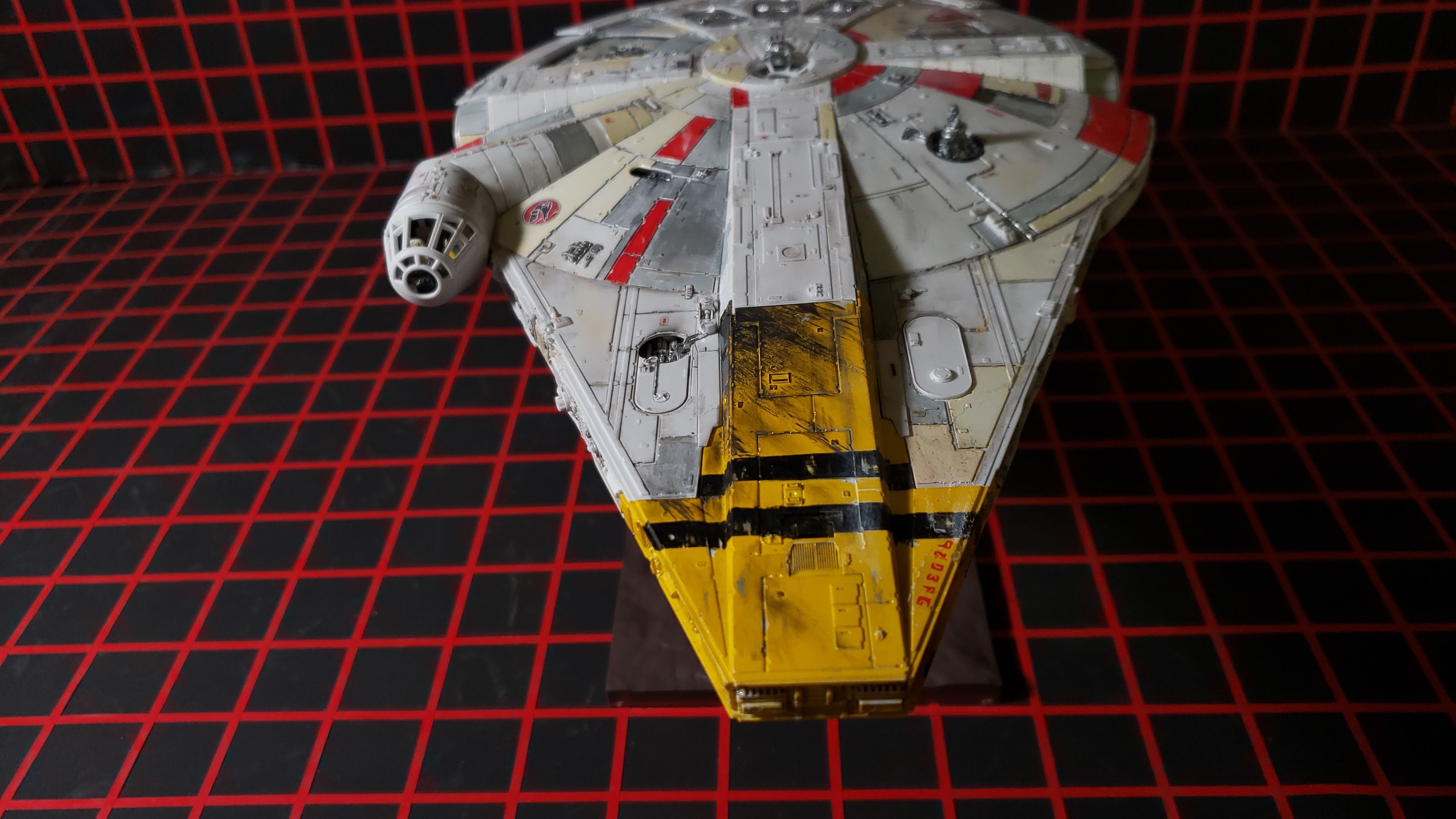 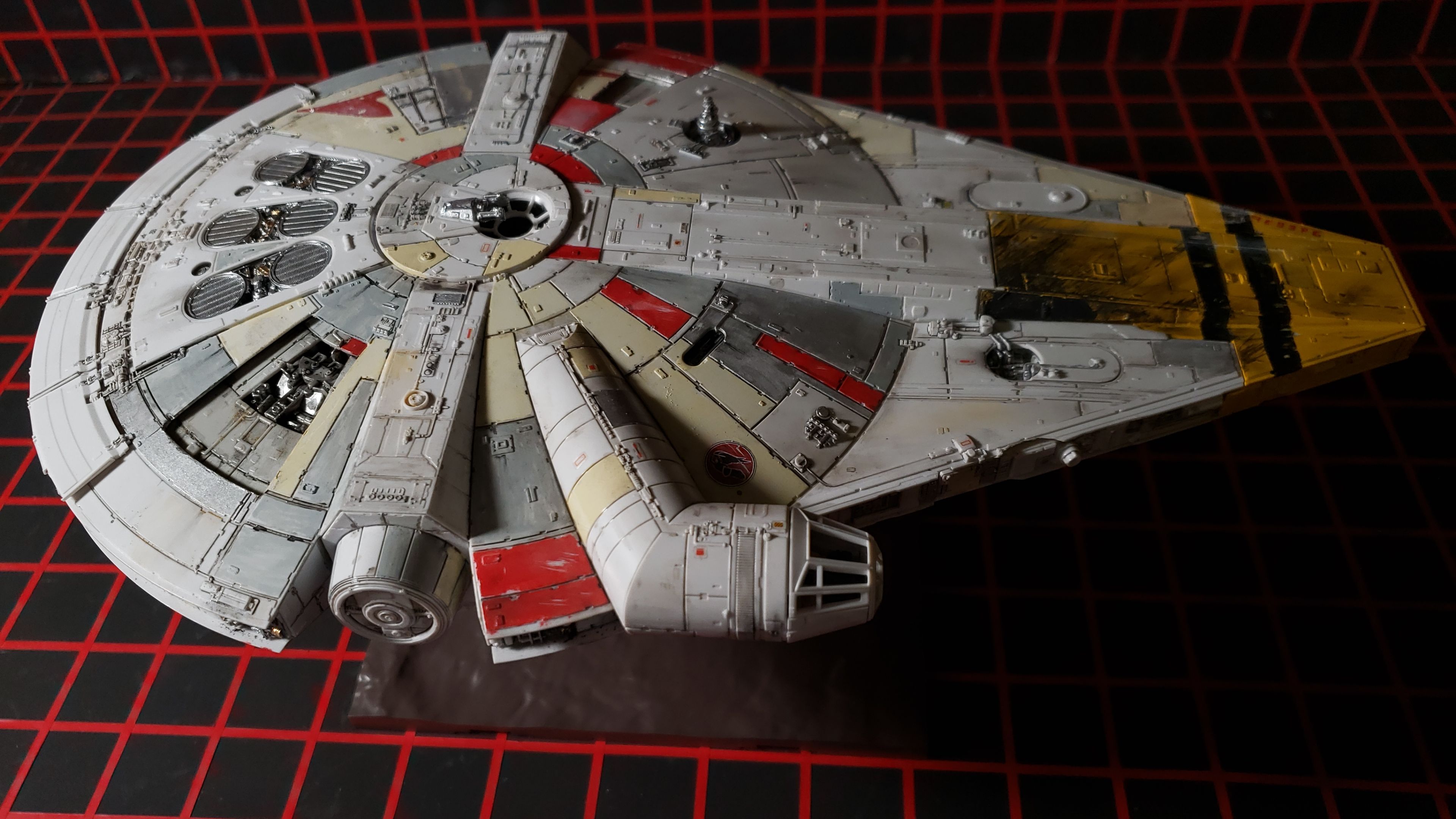 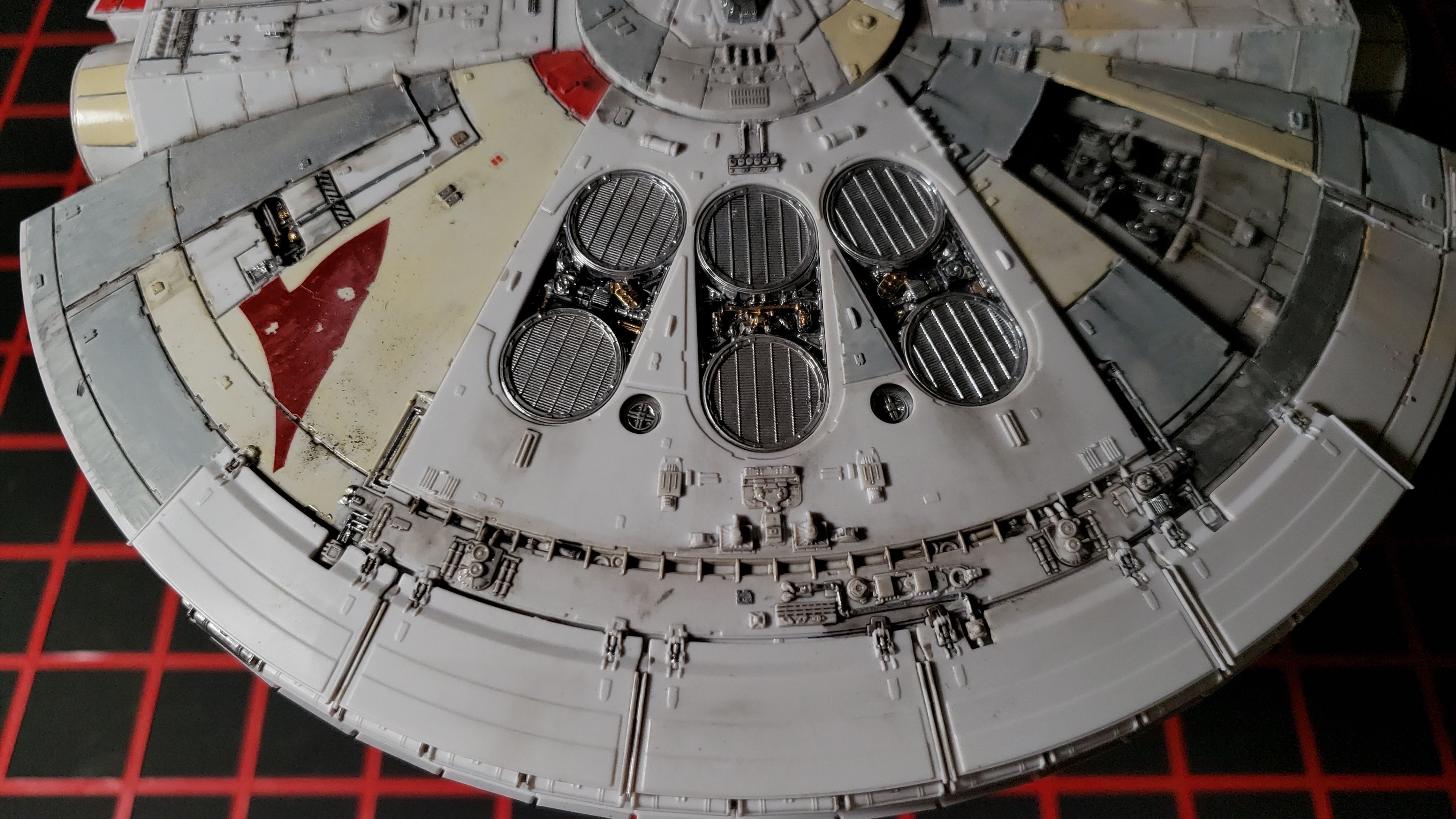 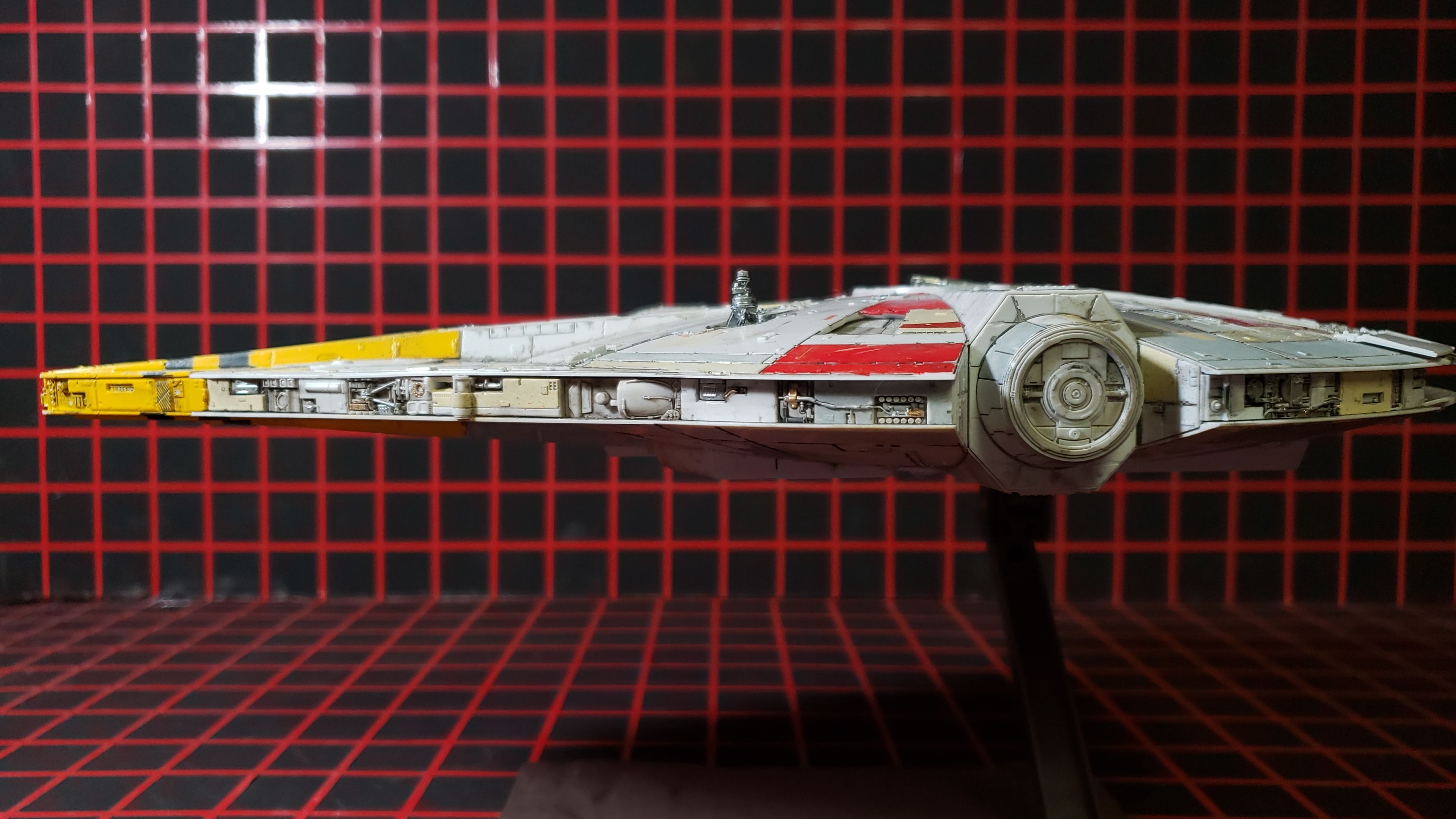 That's a really great build, and I love the idea behind it. Very well executed too!
Thanks for sharing.