Last night, I installed her main battery (her turrets) and the deck guns, but I didn't take a photo. I'll take one tonight. Now she really looks like a battlewagon!

Here are the pics I promised for last night. Monday night, I added her main battery (ie, her turrets) and her deck guns:

I couldn't wait anymore, and I needed to get them installed before adding any of the railings. Plus, I was worried that the tiny, tiny deck guns would get lost, as I moved things around my bench and between the bench and the painting station.

This shot mimics the photo that is my guide for this build:

and here's the photo, as a refresher: 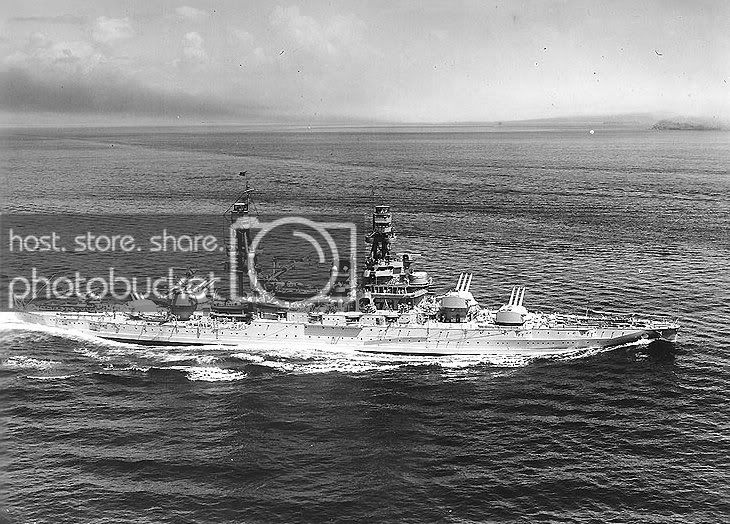 I don't know if this is correct, about the action in the photo, but it looks to me like she's preparing for gunnery exercises. Turrets A and B are locked on, 90 degrees to port, turret C looks like it's just completing locking on, or maybe it is, and turret D is traversing to port. For my build, the catapult atop turret C will be empty, as if the scout was already launched, and the catapult on her fantail will depict the act of launching the last scout, to head to a spotting position.

I started working with the photo-etch last night, removing the railing for the starboard side of her bow. It's very fiddly, and I still haven't quite worked out how best to shape it or attach it. As far as shaping goes, I pressed the railing along the perimeter of the bow, which worked to a degree. But when I get to the rails around the platforms on her masts, I'll have to come up with a better method. For attaching, I haven't decided whether to use CA glue, two-part epoxy or white glue. White glue is probably the most forgiving, if I make a mistake. In any case, I welcome advice on this issue.

As always, thanks for looking, and criticisms and comments are welcome.


been catching up on this build, I really like what your doing with her, a lot of tiny scratch building too

Thanks, Shane! The term, "silk purse from a sow's ear" is coming to mind more and more as I wrap up this build, but it's still fun.

I'm still working on painting her complement of boats, and the cranes, so I don't have any new photos. I'm off this week, though, and I plan on taking some time to finish that step, and then get started on the base.

Baron, I know how that feels im painting up Bismarck's boats and plane too as we speak it is a fiddly business i wouldnt care to try it in 1/700 !


looking forward to seeing it all come together mate

Well, I won't get the Pennsy finished this year, either. I have been working on other things in between, and I'm stuck at the point of adding the PE. I confess, it's intimidating. I did get a tip at our club's Christmas meeting, though, from my buddy Bob Ciccone, and that was to paint the whole fret, and then touch up as necessary after installing the bits. He also suggested using tweezers with the flat spade blades, to avoid damaging the pieces. So I've shot the fret with my gray, and painted the piece I'd already cut out, which was a bit like getting a worm to hold still. Maybe I'll get some pieces attached before the 31st. Still touching up and installing the boats, too.

Make sure that the railings lengths are not too long when you attach them. Go 5-6 segments each time. As well, I found it easier to not bend the railings around corner, but cut them up and work with straight length all the time. It gives you better conrol.
Ask Bob for advice whenever you can. He's a great ship modeller.
Do easy: It's supposed to be fun!
Cheers,
Guido

Tailor said:
Make sure that the railings lengths are not too long when you attach them. Go 5-6 segments each time. As well, I found it easier to not bend the railings around corner, but cut them up and work with straight length all the time. It gives you better control.
Ask Bob for advice whenever you can. He's a great ship modeller.
Do easy: It's supposed to be fun!
Cheers,
Guido
Click to expand...

Thanks, Guido, that's a very good idea. I looked at the diagrams in the instructions and the parts themselves, and didn't think outside the box, I just assumed I'd cut them the same way. For the rails on the mast platforms, especially, that is a very good idea, to cut the straight segments.

I do have an idea, too, for any future build, and that's to use the kit parts as templates, shaping the rail pieces around them before assembling. Again, on the mast platforms, I could see using the deck halfway up the mainmast as the template to shape the rails. That's probably more work than necessary, though, too, but I might try a proof-of-concept test on some scrap.

I tried the pre-assembly bending method, too. Did work out for me to to lack of space to store the pre-bend stuff properly until final use. However, I may float your boat, so give it a try.
Cheers,
Guido
You must log in or register to reply here.
Share:
Reddit Pinterest Tumblr WhatsApp Email Link