Looking sweet Scott!!! 8) I'm sure you have the leveling part all worked out!! Keep those fires lit buddy!!

See if this works.

While looking for some reference pictures of the Polish DANAs in Afghanistan....I stumbled across this video of them firing.

Listen to the guy on the loud speaker.

"If you are parked in front of the DANA, Please move!" 2nd video down.

OK....for some reason it won't let me post the page, and keeps going to the first video, which is cool....but the 2nd video is better.

That underside is looking mighty fine Scott , nice clear pics too ,and that looks like a hoooge engine in the front there ;D

OK...been awhile since an update....haven't stopped working on it (mind you not as much as I would like to have been working on it), but the front driving cabin has alot of fiddly parts. Sometimes seemed like you would work for a couple of hours on it, and not much to show for it. 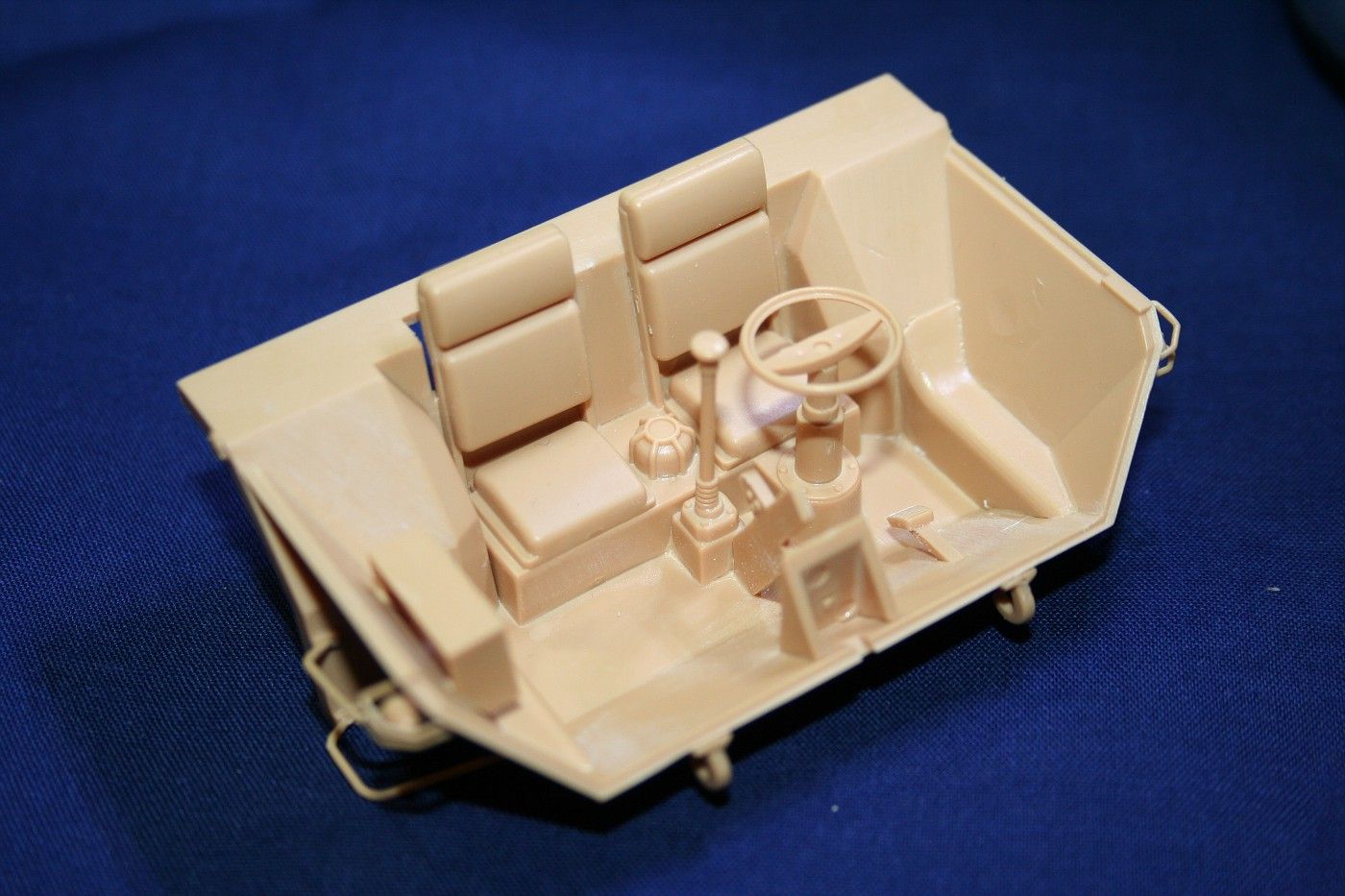 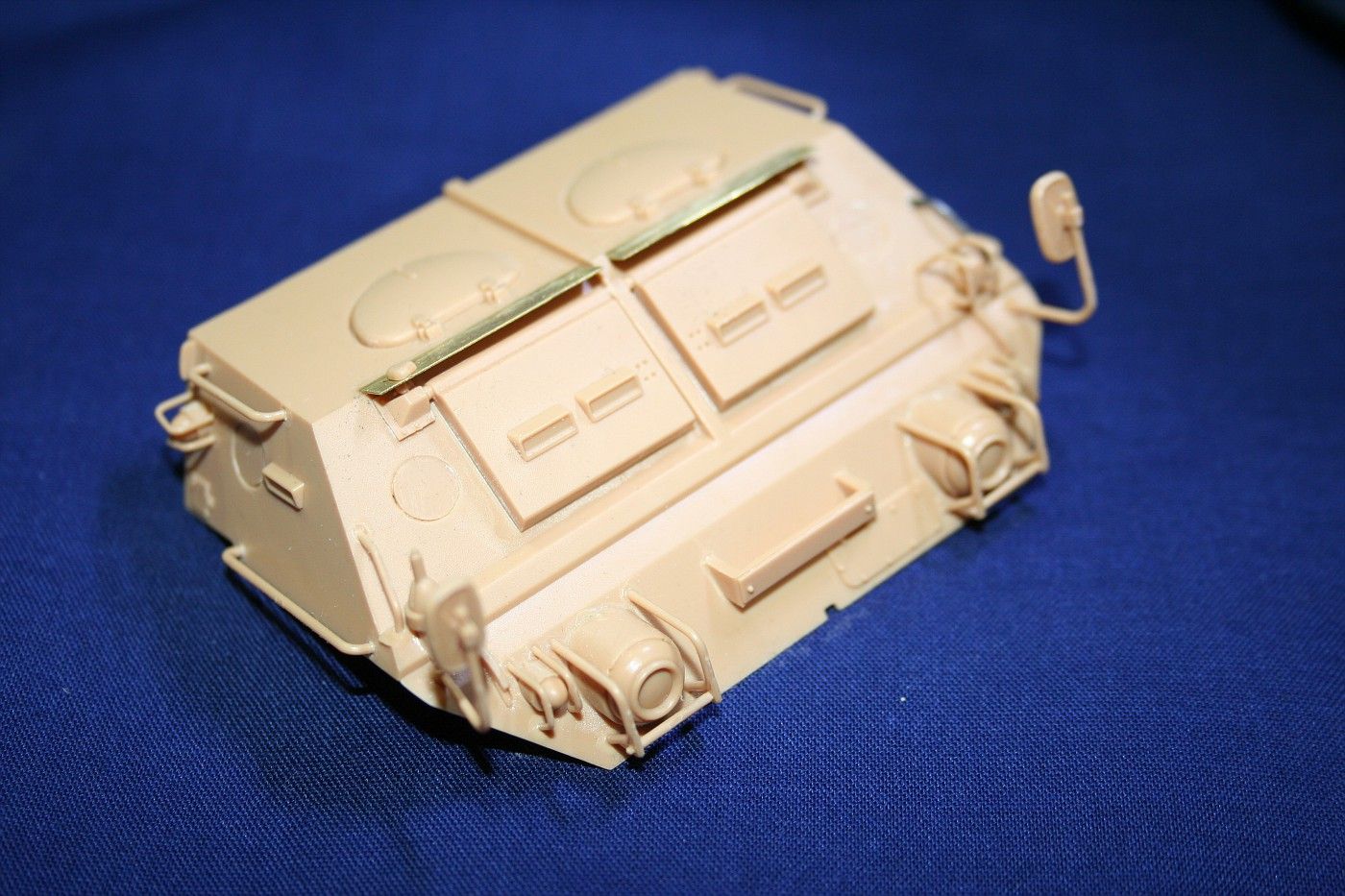 I had intentions of putting a little more detail into the cabin, but I plan on showing this in firing mode, which means all the hatches are closed, hence, you can't see anything, so the detail would be wasted, once the top and bottom go on....nothing can be seen....so I am not even going to bother painting it.

I tried dry fitting the bottom to the frame, but ran into my first problem with the kit. The slots in the back of the cabin bottom don't line up with the tabs on the frame where it is supposed to go. So, sliced off the tabs, but the cabin bottom doesn't fit as well as I would like, however, once the cabin rear goes on, and then the cabin top, it is all buttoned up, I don't think the slight warp will be able to be seen.

Having come this far with the kit, it really does build quite well so far, with the exception of above (which is minor), I would almost like to build another of these, but with all the hatches open so you can see inside....maybe someday!!

Shame that detail has to be hidden

Few more photos, got the lower half of the front cab on the frame. 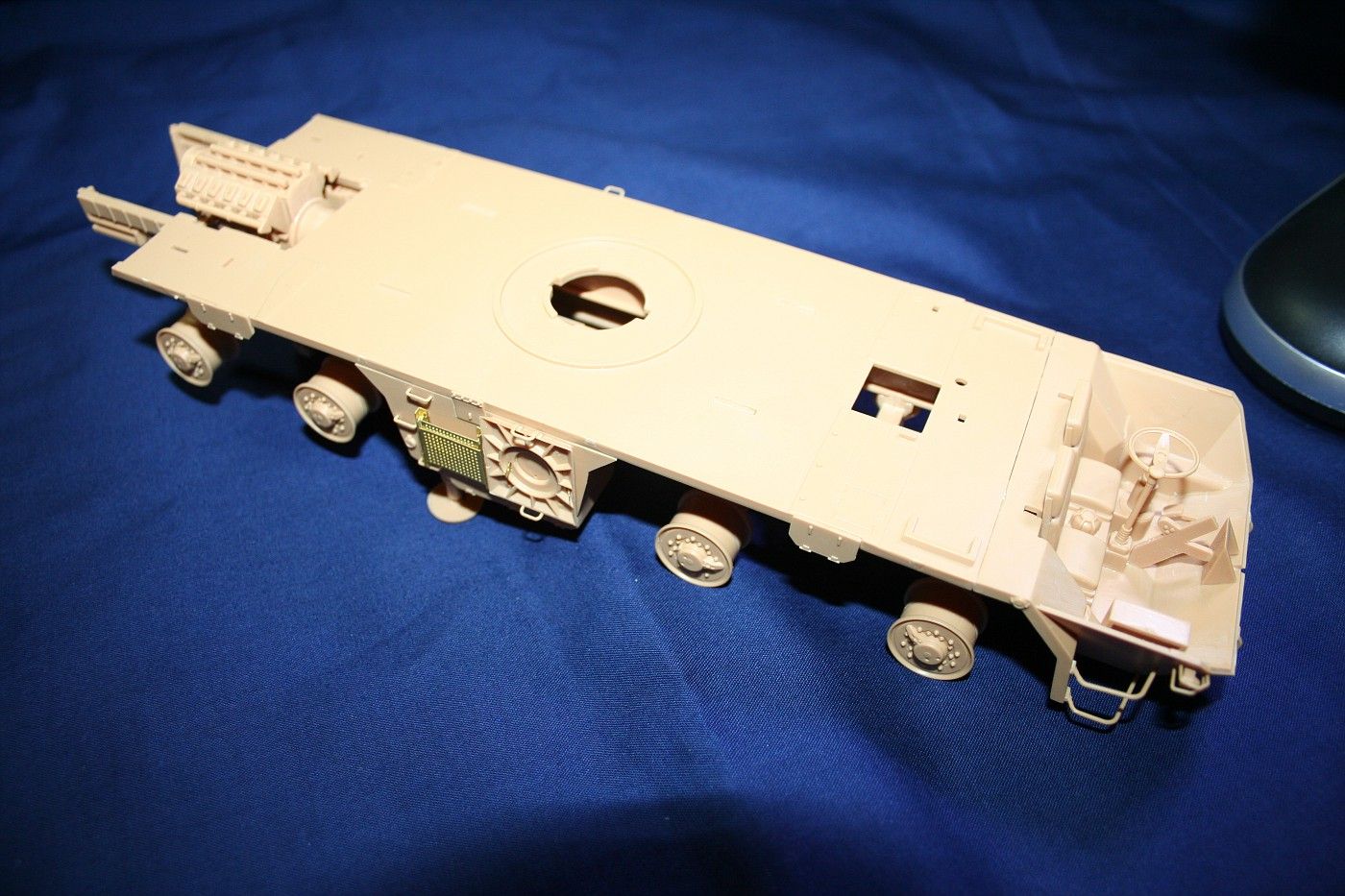 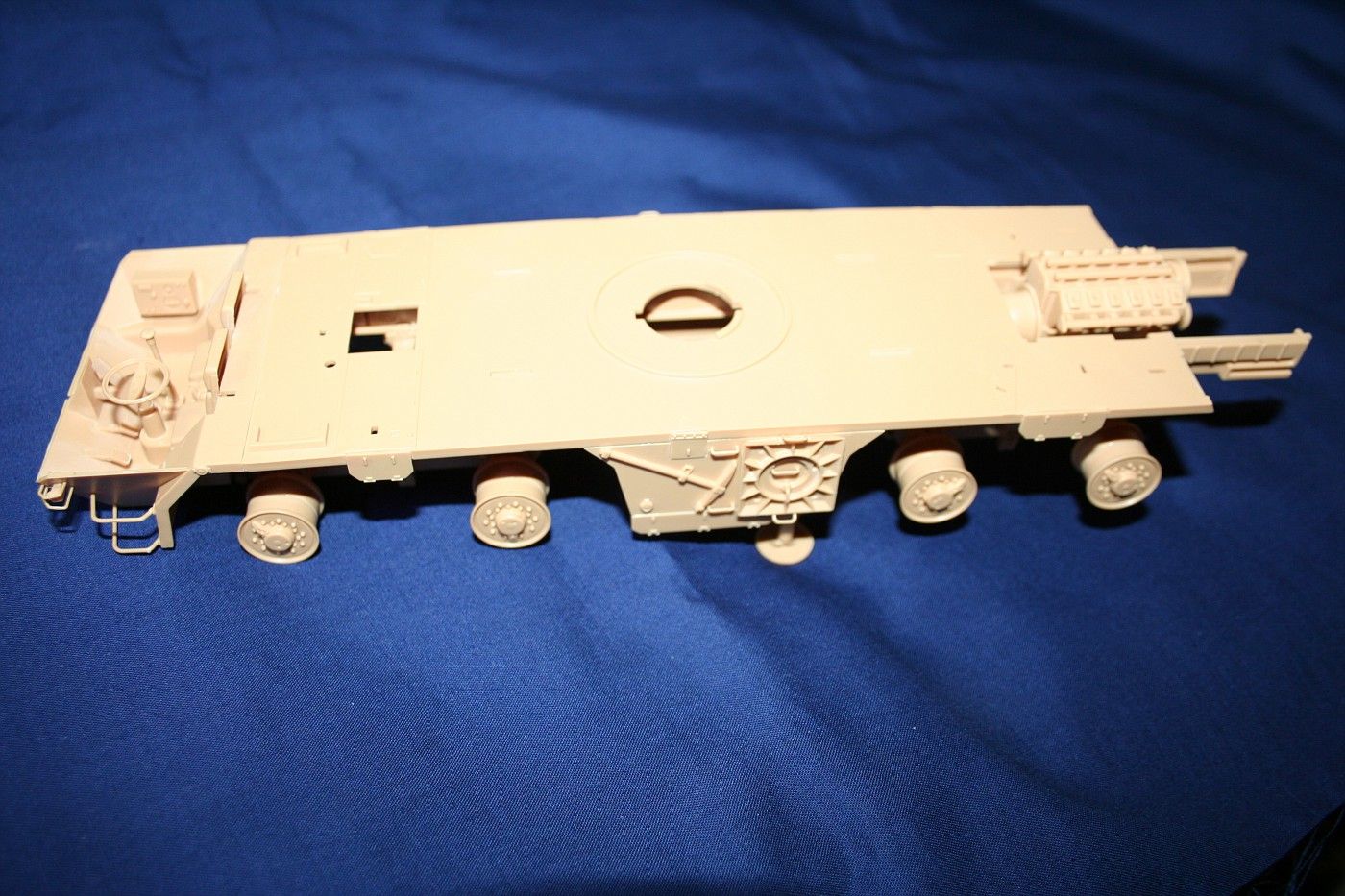 In the first picture you can see a seam where the lower cab meets the frame, I am afraid I caused this from when I put the frame together. Think I had too much pressure on the frame rails when the were drying, that has actually put a little bow into the deck.

There is the rear of the cab the sits behind the lower cab, (which is currently glued, clamped and drying), and it wouldn't sit flush to the deck because of the bow....hopefully the bow is only at the front...or the worst of it at the front, will see how bad it is going to be when I put the upper cab on once it is dry. 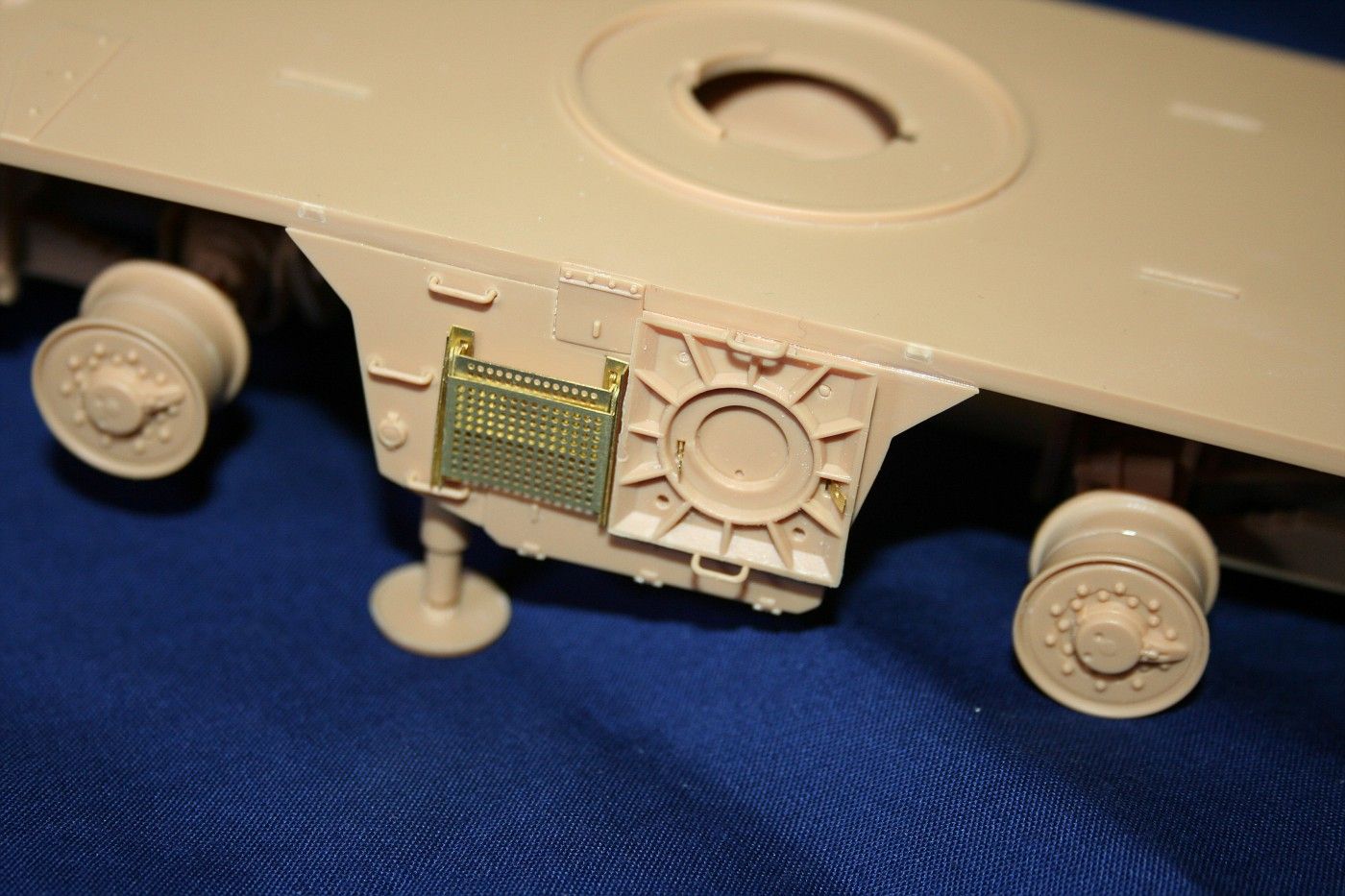 First bit of generous PE included in the kit, this is the step up into the turret area, and it can be assembled stowed or deployed. Chose mine stowed as all the photos I have of the Polish Danas in Afghanistan show them stowed when they are firing. This is the first of Hobby Boss' PE I have worked with, and I really like it. When they make the PE, they make the attachment points to the PE sprue as small as they can for easy clean up, but sandwich the PE fret between 2 pieces of semi tacky clear plastic sheet, sort of like a thick piece of saran wrap.

So basically what you do is use your Xacto to cut the plastic away from one side, use a blade to cut the attachment points, and the plastic on the bottom has enough tackiness to it to hold the part in place....so no more tiny pieces of PE being lost to the carpet monster when you cut that last attachment point. The other PE manufacturers could learn a thing or two from Hobby Boss in this area!!
S

Hooooo that looks might nice ! Glad I got one ! Can't wait to start it...

Keep up the good work !

Actually tried to dry kit the upper cab last night. Something is getting caught inside the cab and not letting me close it up (think it is the steering wheel) I may just try and pop out a few parts I think is causing the problem, since none of it will be seen anyway.

That's looking great! Bummer about the fit issues.
I feel the same way about my Stryker. I want to build another one and scratch build the inside and open all the hatches. Maybe even add some lights.

Actually tried dry fitting the upper cab onto the lower cab again, and it somehow fell into place (it did this before when the parts weren't attached to the frame), so naturally I was like, frak that....since it fell into place, no time like the present to put some glue to it.

Fit issues are likely not the kit's fault, but operator err0r, the bow in the deck I believe is because I had the frame rails clamped too tightly, which has thrown off some of the fit, I am sure if not for that, it would go together very well....so not the kit's fault.

Neat build,.. and clean work so far. I'm starting to warm up to this modern stuff.
S

Scott, asking you a question here.....

about that Frame to Chassis fit issue... would you consider building the frame rails and cross members while using the BED of the truck as a jig ? to keep it straight ???

if you built another one ??? would that help ? I am asking cuz I have one and would like to find out your Views !!!

I think it was just a case of me putting too much clamp pressure on the frame and bed while the glue was drying, which in turn imparted a slight warp to the center of the bed. Fortunately, most if not all will pretty much be hidden, just has meant that some parts that should sit flat on top of the bed, don't and require careful clamping now to sit flush while the glue sets up. No biggie....but is something to watch out for.

Depending on which version you plan on doing, if you want to one of the many Polish versions, picking up the Toro decal set wouldn't be a bad thing, as well the WWP book is awesome, although most of the pictures in it are of Czech versions, there doesn't seem to be much difference with the Polish version.

Apparently Iraq also had a few of these. I think if I was to do another I would either do it in the Iraqi scheme or the Czech winter camo.

At first when I saw this thing, I thought it was not real, an when I saw photo of the real thing I was blown away. An your work it grate man.

OK....finally some more work on this....done over the last couple of weeks, not much considering everything that has gone on around here, but working on this keeps my mind occupied and off of other things and from going insane! LOL

First up...the box that forms the back of the cab. Had to clamp this on because of the bow in the floor of the vehicle (my fault) but seems to have straightened alot out. 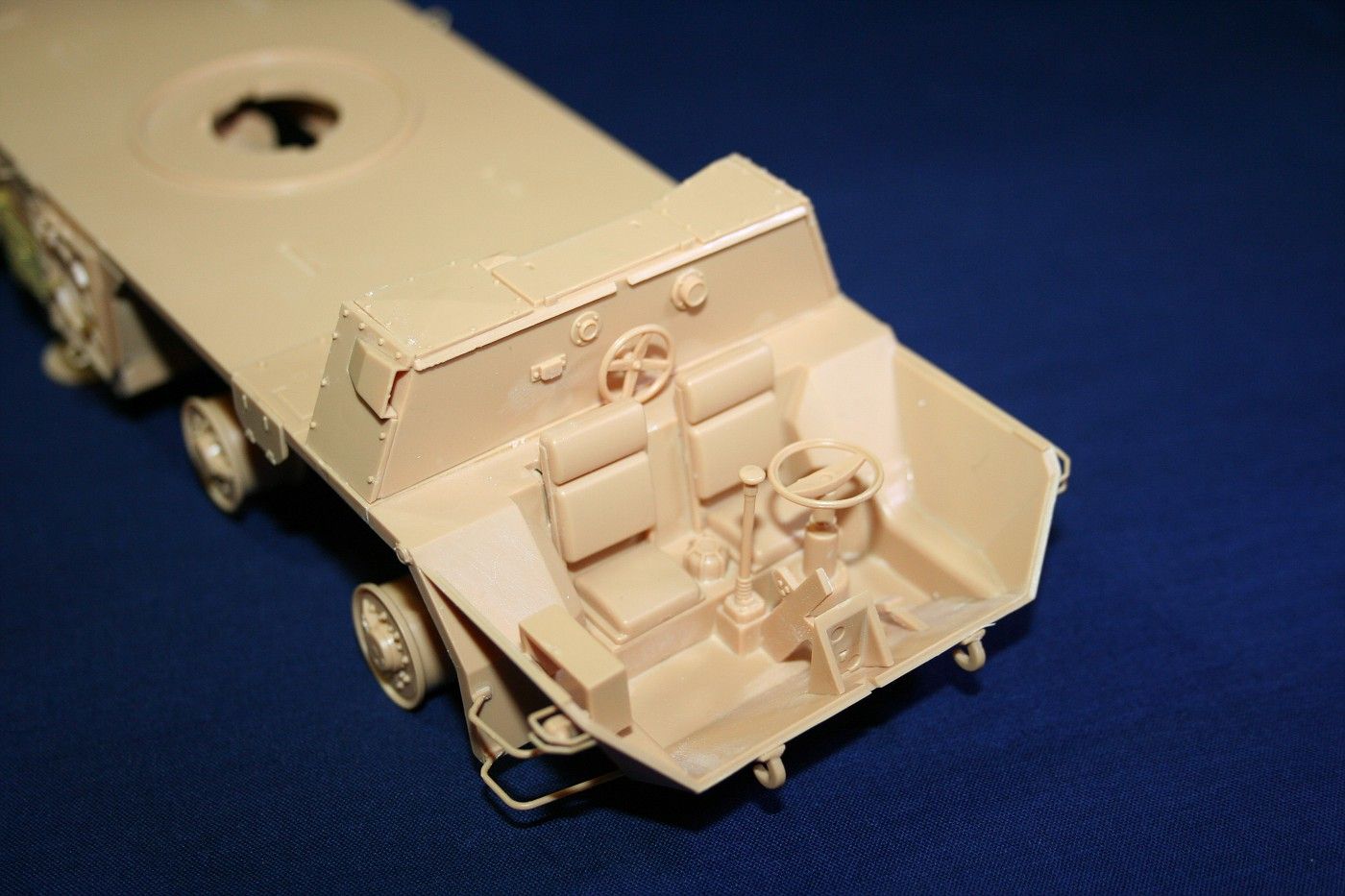 Back side of the box 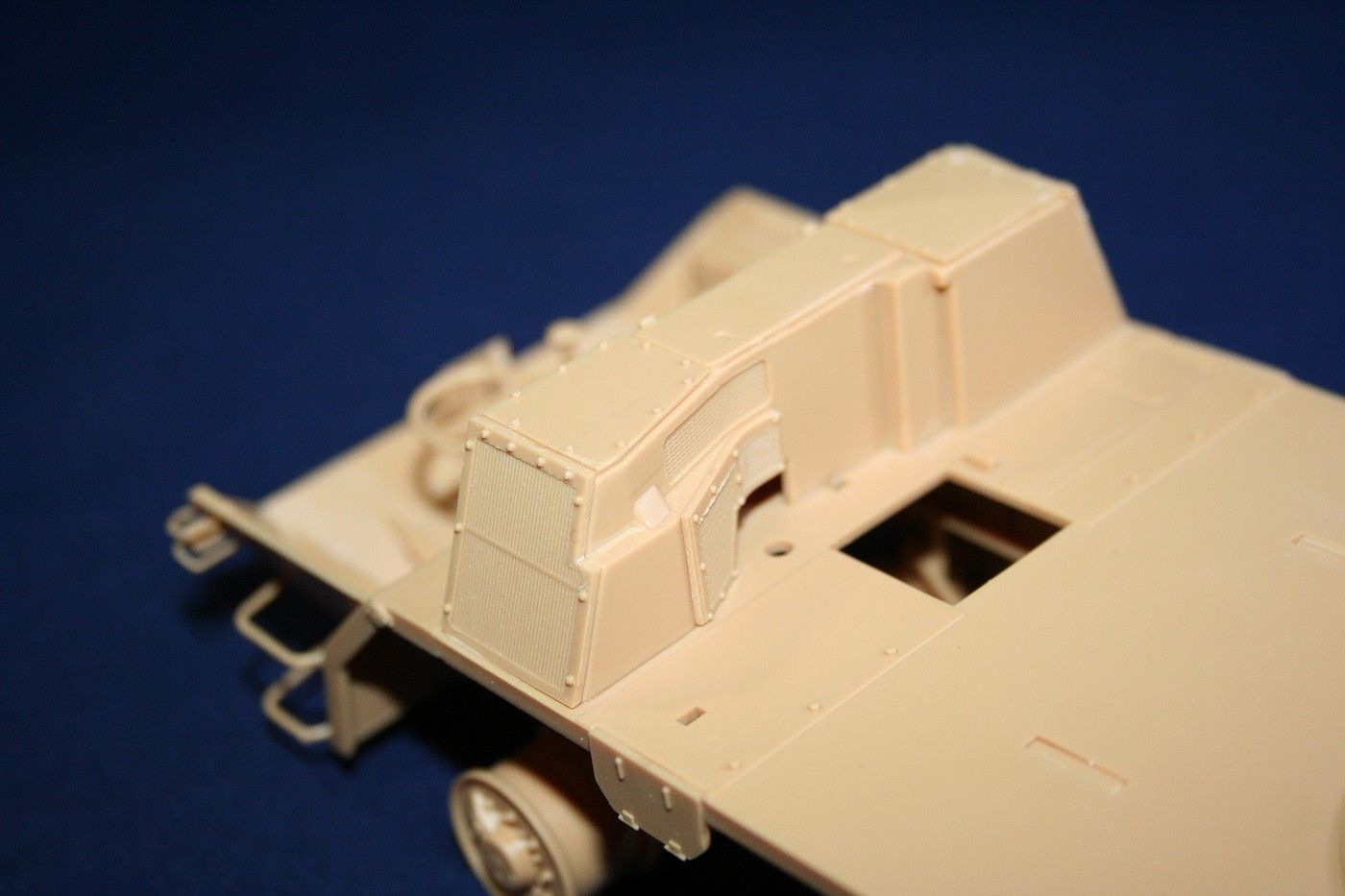 Now with the top half of the cab on. I had trouble with it fitting, something inside the cab was keeping it from going together....thought it was the steering wheel, and was just going to cut it off, since it wasn't going to be seen. But I tried one more time to fit the cab top on...and luck was on my side as it just fell into place....so to not tempt fate, I glued it in place. By the end of the build I might regret installing all the handles and mirrors. 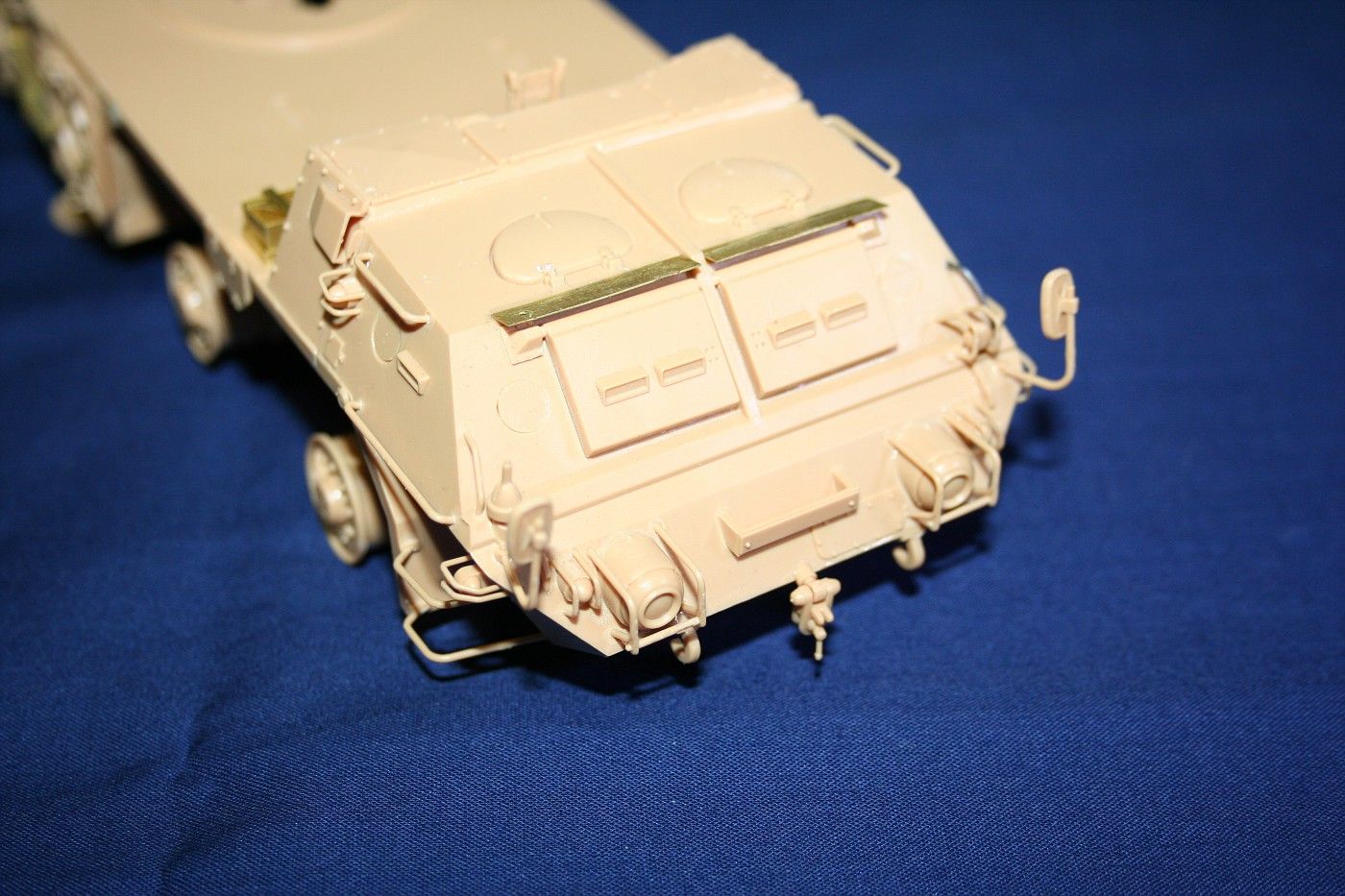 Now on to some of the PE additions, blocks to go under the wheels to keep it from rolling when it is being fired....in retrospective, since I am building this in firing mode....I probably should have left these off and placed them under the wheels on the base when it is finished.....ahhh well, lets just pretend they used some sand bags! LOL 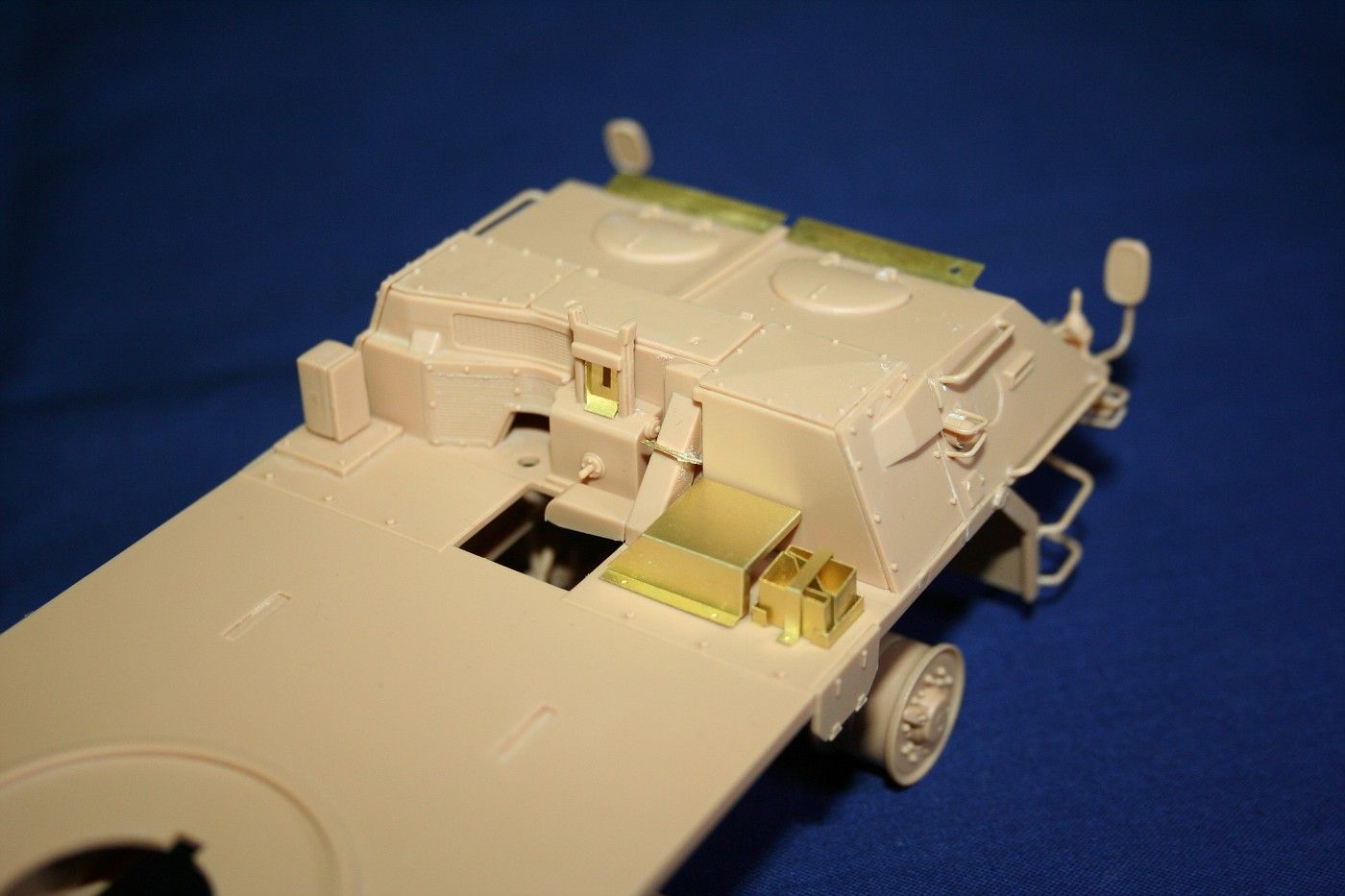 Shot of the turbo charge assembly added to the engine. I have since build a couple of boxes that go beside the engine that forms the start of the engine encasement, and the back panel that houses the rear support leg. They just need to be installed. 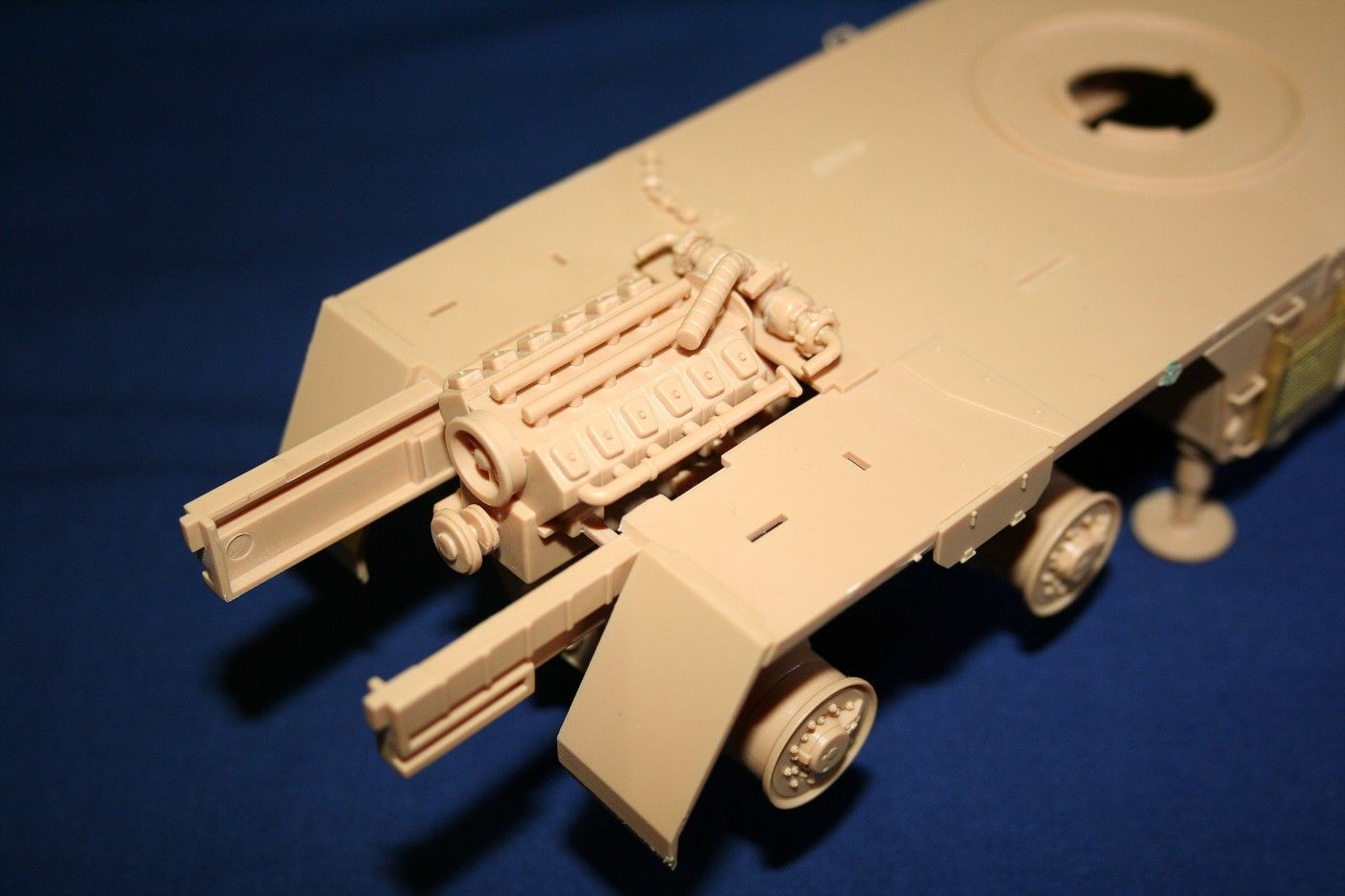