This is my first entry for the contest. The Pioneer was the first allied jet propelled aircraft. The prototype aircraft was used as a proof of concept, and the E28/39 never went into production, however lessons learned from it were applied to the Gloster Meteor and indirectly to the Bell YP-59.

I going to use this as a warm up build, kind of getting into the swing of things. It's an old kit, the release I have is likely from the early 1980's, the original Frog moulded kit dates back to the 1960's. The kit actually says "MADE IN USSR" on a kit part...

I plan to build this very small aircraft completely out of the box, except for some of the decals; which I'm replacing (due to age). I hope to re-scribe the very faint raised panel lines.

A picture of the kit contents:

My first step was to remove flash and ejector pin marks. Every part has both. Not many parts here, but I've been filing down ejector marks and trimming flash...Here's a cleaned up wing beside one still waiting for the "treatment".

More on the way.

Looks like some work to come.
You'll make it shine, though

kill the flash, do it, kill it . but I do agree the small pilot did not eat enough Wheaties hehehe

Go for it buddy we are all eyes and ears

Thanks a ton guys - I appreciate it.

Just the old model brand, not the amphibian.

Small little update, none of this took very much time or effort, I've just been away from my bench with work related stuff;

All of the ejector pin marks have been filed and sanded to oblivion. I've glued the top and bottom wing halves together and began filing and sanding again. The wing root joints (both on the fuselage side and the wing side) need to be sanded way back to avoid Grand Canyon sized gaps. I have also painted the interior of the fuselage black.

The cockpit tub was also assembled. The problem with it is that the intake (strake? Or splitter?) had a big gap in the middle. This gap never existed on the real thing, see below; 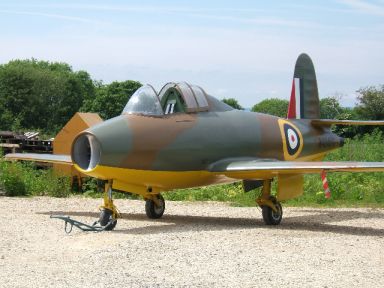 On my build I filled in the gap with Vallejo putty. When the putty was cured, I sanded an angle to the sides and gave the front end of the (strake? Or splitter?) a radius. I didn't bother sanding in the concave - it's pretty small and sits farther aft on the Novo kit than in the picture above. The picture below is from just before I did the shape sanding.

Then I fit and secured the tub to the fuselage half.

I'm so going to make jet "whoosh" noises and fly this around the room when I'm finished. Fun.

The canopy isn't the clearest and the cockpit is very empty (it includes only a seat). I'm debating if I should leave it spartan, or fancy it up a bit. I have some time to think about that...

Next up is dealing with the panel lines - at this point I'm thinking I'll re-scribe the panel lines. From the picture below you can see they are very faint. But I hate re-scribing and usually try to avoid it...we will see. The other thing is the sink marks; the fuselage has a number of deep ones that will have to be filled, you can see one of the smaller ones in the picture below.

Until I manage to free up some more time, Thanks for stopping in and checking out my build.
Jason
You must log in or register to reply here.
Share:
Reddit Pinterest Tumblr WhatsApp Email Link