After a year & a half, ive finally stopped my wife from nagging me & found a Ford Capri model kit to convert into a Del Boy Ford Capri from Only Fools & Horses.

Picking up a pre-built Monogram Ford Capri II kit from a seller on ebay, whilst taking it apart I discovered that the seller had used what looks like superglue to put it together & whilst it came apart very easily, I was shocked to see he hadnt done anything with it.

No painting & no interior decoration, well that is all about to change.

Glueing the clear windshield & rear window into place with my glue n glaze & getting the main shell for primer with masking tape, when I sprayed with the primer the shell instantly looked a million times better with just the primer.

Then came the interior, after I primered that too I started on the seat covers with the tigerprint decals sheets.

Starting with the back seats, I created some templates with some microwave pizza box card & drew around with a pencil onto the decal paper & cut them out.

Using Microset & Microsol, I then placed the decals onto the seats (which was quite easy) & just used some of the offcuts for patching up around the edges.

Same principle for the door panels, but using some greaseproof paper as tracing paper, I then traced around the side panel inserts & cut them out & applied them to go around the border of the inserts & again patched up with some offcuts.

The dashboard was a little bit of a problem, but the Microset/sol did its job around those difficult corners, I decided not to decal the instument panel, as it was very fiddly & trying to cut around the dials didnt work out, so I removed the decals & painted in black with the dials in white & drybrushed in silver to bring out the detail.

Then came the task of the front seats.

Was very fiddly indeed & using some more offcuts to patch up here & there, the final result is not too bad, even if the headrest so looks a little square instead of rounded, but once the shell is on top, hopefully they wont be noticable.

Once I sealed the interior, I started on the bodyshell.

Masking off the car apart from the roof & a little on the side, I sprayed with Halfords gloss black, once dry I took all the tape & newspaper & masked off where id sprayed black & sprayed the rest of the car with Humbrol 38 Lime Green.

Then I sprayed the underneath chassis in Halford gloss black & picked out the prop shaft, exhausts & the fuel tank in silver, which will be rusted up later on.

All-in-all so far the Capri is looking a helluva lot better. 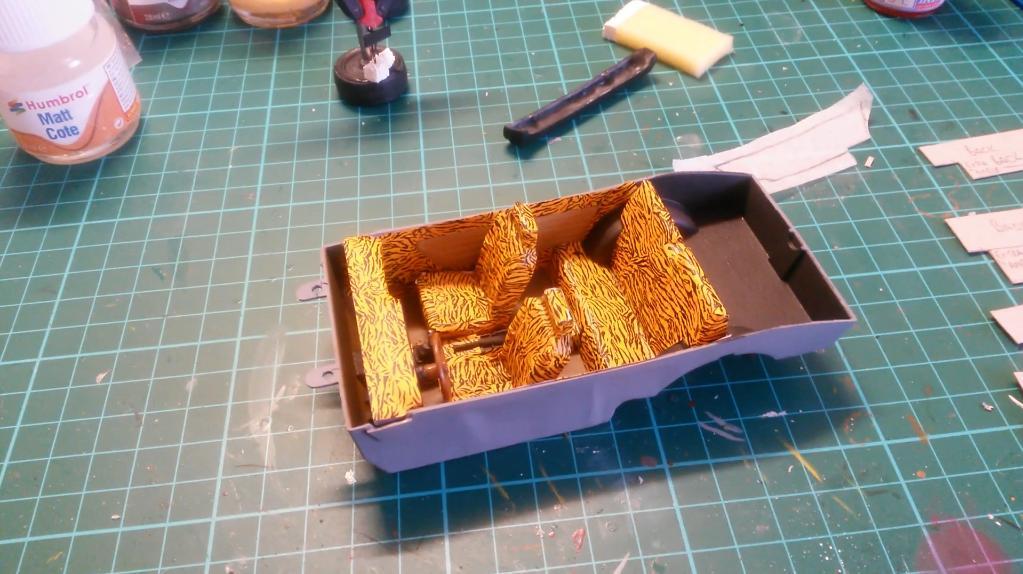 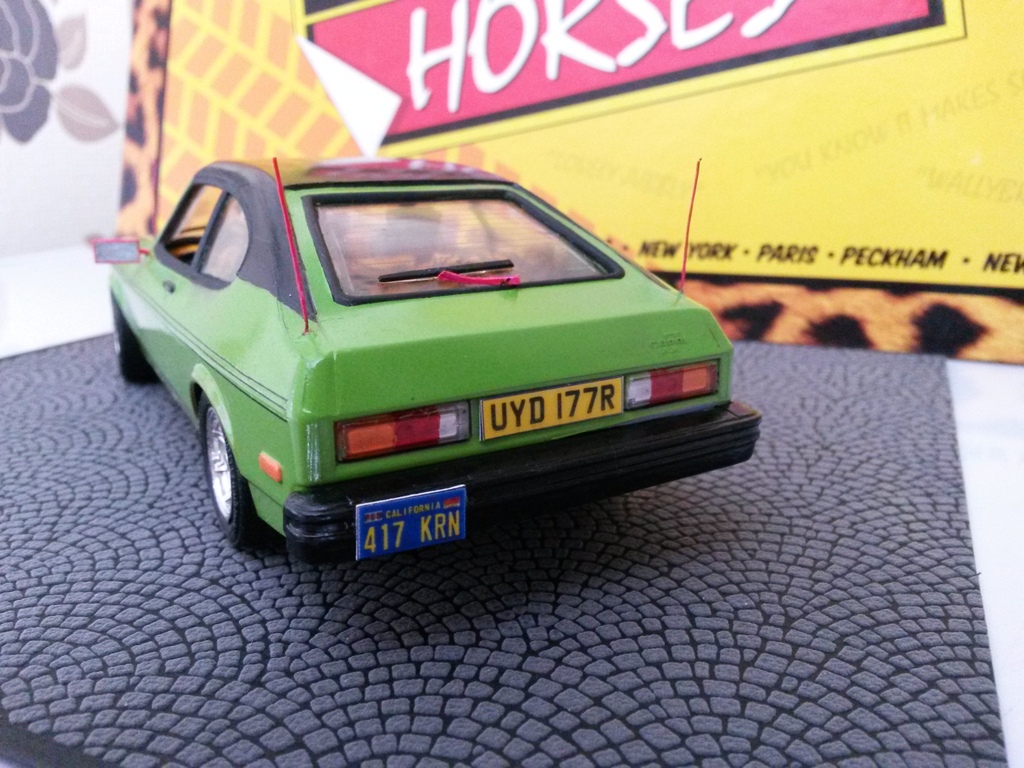 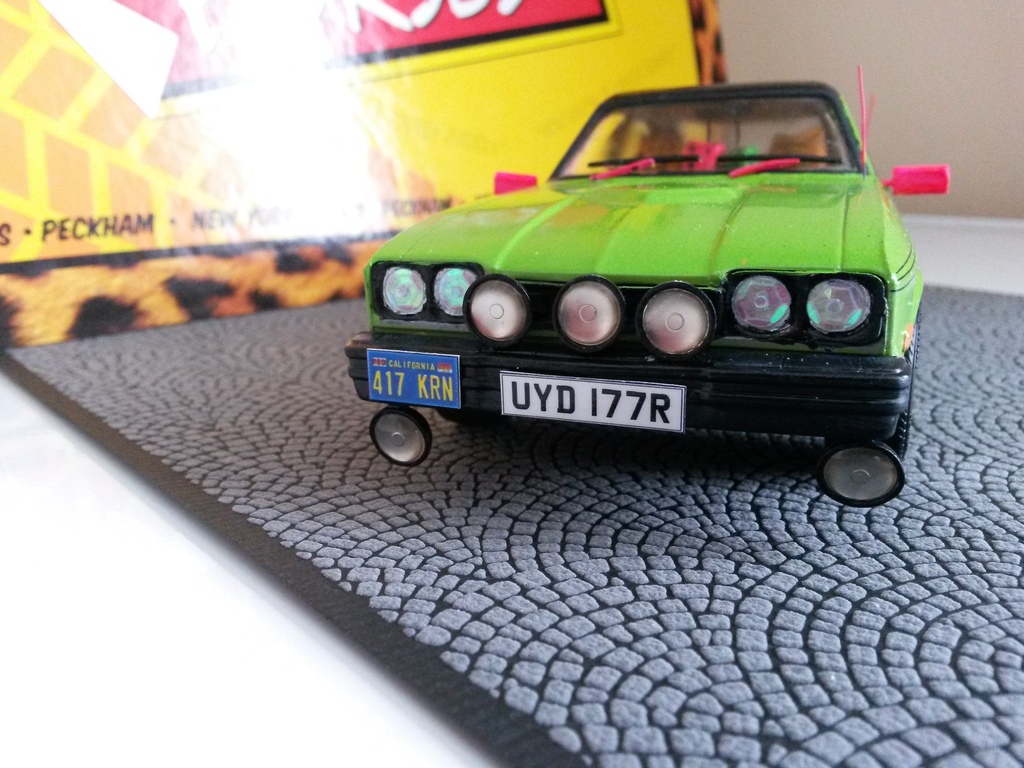 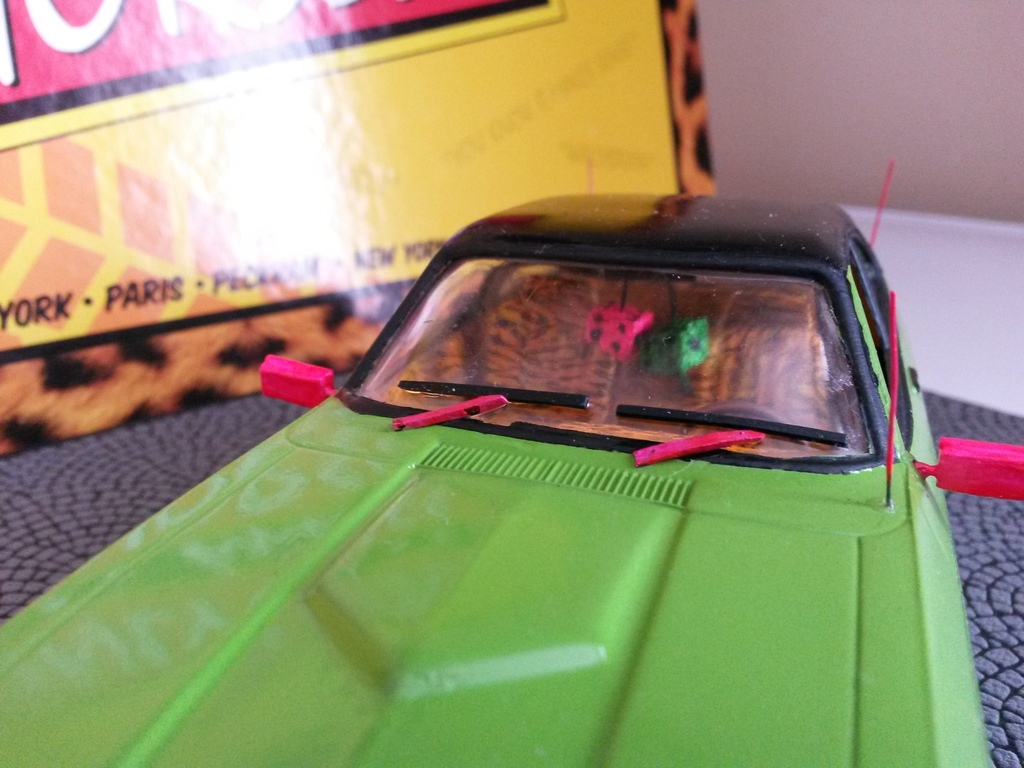 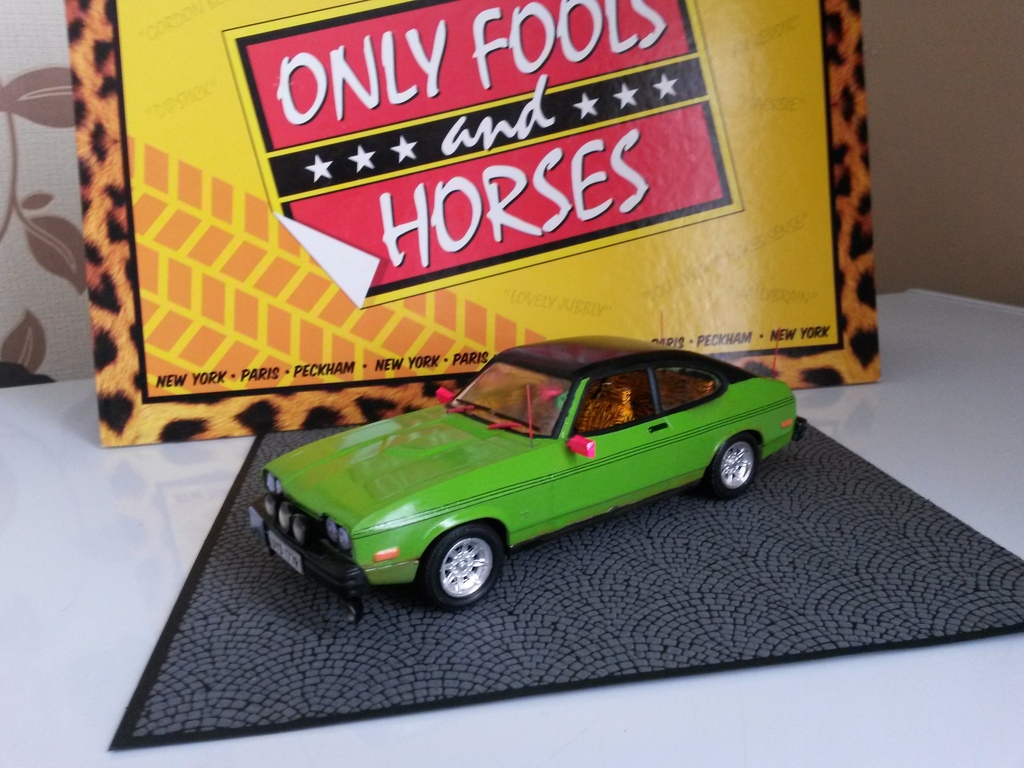 Ive started by lining up the 3 pinstripes on each side using the pinstripe decals I bought from Kitform Services, then I discovered the pinstripes wern't long enough.

So I had to overlap the line by cutting a pinstripe in half to make sure it went the full length of the car.

Soaking the pinstripe decals only took a mere few seconds to get them off the backing paper.

So, 6 times later I left them to dry & sealed them with some Humbrol Glosscote, however I didnt use Microset or Microsol on the pinstripes as they were a bit flimsy, so on the safe side I just used water.

Whilst the lines aren't perfectly 100% straight, they are straight enough for me.

I started where I left off with the mainbody shell by glueing in the underneath chassis, which clipped in at the rear & the mounting pegs with holes underneath the bonnet.

The front bumper plate had to be modified slightly, as the whole plate wouldnt glue back into place, so I cut off the side wheelarch bottoms & the front section for the bumper.

Throwing away the offending peice, I glued the 3 pieces into place & glued the bumper onto the front section.

Then I glued the last 2 rally headlamps into place underneath the bumper into the 2 holes I already drilled.

As I couldnt get some spare 6mm lenses for the headlights, I managed to get some 5mm transparent seaquins, glued those onto the front grill using the glue n glaze & they dried clear, so they worked out an absolute treat.

Using my push drill, I drilled 0.6mm holes (2 on the back, 1 on the bonnet) for the aerials using foodties.

I melted the plastic off the ties on my cooker, waited for them to cool, painted the silver & then the flourescent pink & put them inside the holes & glued them into place.

Then came the rear view mirrors.

The interior mirror was just a little of my sheet sign plastic, glued to one of those spare washers from my AT-ST, painted black on one side with silver on the other (to replicate the mirror) & glued to a piece of paperclip into another spare washer on the roof.

The hanging dice from the mirror were some sponge painted with white paint to make them go crusty, cut into 2 squares with 1 painted Tamiya X-15 green & the other painted in the flourescent pink, with little black dots painted on with a paperclip end.

I then jabbed each of the dice with a needle & thread, knotted underneath the dice a few times & hanged them onto the mirror.

The side mirrors are old ammo boxes from my Humvee build a couple of years back, I cut them in half down & using my dremel, I grinded a channel into the ammobox & glued in a small peice of a paperclip, filled the remaining of the channel in with some putty, sanded them down, then painted them flourescent pink & silver for the mirrors.

Mounted those into the side of the doors into the holes I pre-drilled & glued them into place.

I made some windscreen wipers using a little of the sheet sign plastic & some rubbers strips for the wipers, painted the arms in silver & the flourescent pink & glued those into place.

Last but not least were the numberplates, they were self adhesive & were mounted onto some microwave pizza card & using a combination of doulesided-sticky tape & glue 'n glaze they were mounted into their respective places.

My wife is happy on how the Capri tuned out, so Im happy.

What is microwave pizza card ?


this build is making me hungry


this build is making me hungry

The outer box that you get your microwave pizza in, I just cut a flap off the box and used it to mount my licence plate onto.

Because the card is very thin, but sturdy.

All right , back from the vids .


Microsol Rules indeed !
Those decals are crazy but they must be good quality .
You have to be careful with the Sol as it will make short work of disintegrating some lesser decals .

Thanks for the trip across the pond ;D

I had to Wiki Only Fools and Horses , haha

Cool job with the fuzzy dice , BTW . That was a good idea .

Enjoyed videos; c!ever scratch building with fuzzy dice etc. We got the show here (California) for a bit long ago.. Forgot the actor who played Rodney was the guy me and my wife hate on New Tricks...
You must log in or register to reply here.
Share:
Reddit Pinterest Tumblr WhatsApp Email Link