I really shouldn't be doing this...

Just build it straight out of the box, I said...


My La-174 is slightly stuck at the moment as I still haven't gotten the tricky issue of fume extraction sorted. So no airbrushing for me just yet.

Not wanting to just sit idle, I decided to thrown myself into another project that's been lurking at the back of my mind for a while.

Please bear with me - long ranty post coming up...


Some time ago I saw a picture of a tank called the COMRES 75. And apart from the name, not much seems to be known about it.

As far as I can tell, there used to be a resin conversion kit for it, but so far I've had no luck in tracking it down.

So I thought to myself: well, that can't be too hard to scratch build.

And then I thought to myself: well, wouldn't it be cool to replace the gun with a Phaser, creating a really futuristic look?


For those who still have no idea what I'm talking about, a Phaser is a weapon used by the Allies in an Alternate WW2 game called Dust Tactics.

Long story cut short, Nazi Germany finds an alien space ship in Antartica, plenty of high-tech shenanigans ensue, and suddenly you have walkers stalking the battlefield, hover-jets screaming out of the sun, and plenty of high-tech weapons like Phasers and Tesla-guns being used.

A pretty wacky setting, but a rather good game.


Right, so I go hunting for a 1/48 scale Comet or similar late forties cruiser tank. But could I find any? Oh no - not a single one...

But I did get my grubby hands on a Sherman, figuring that it would be a useful substitute. After all, it was the quintessential Allied tank of the war. 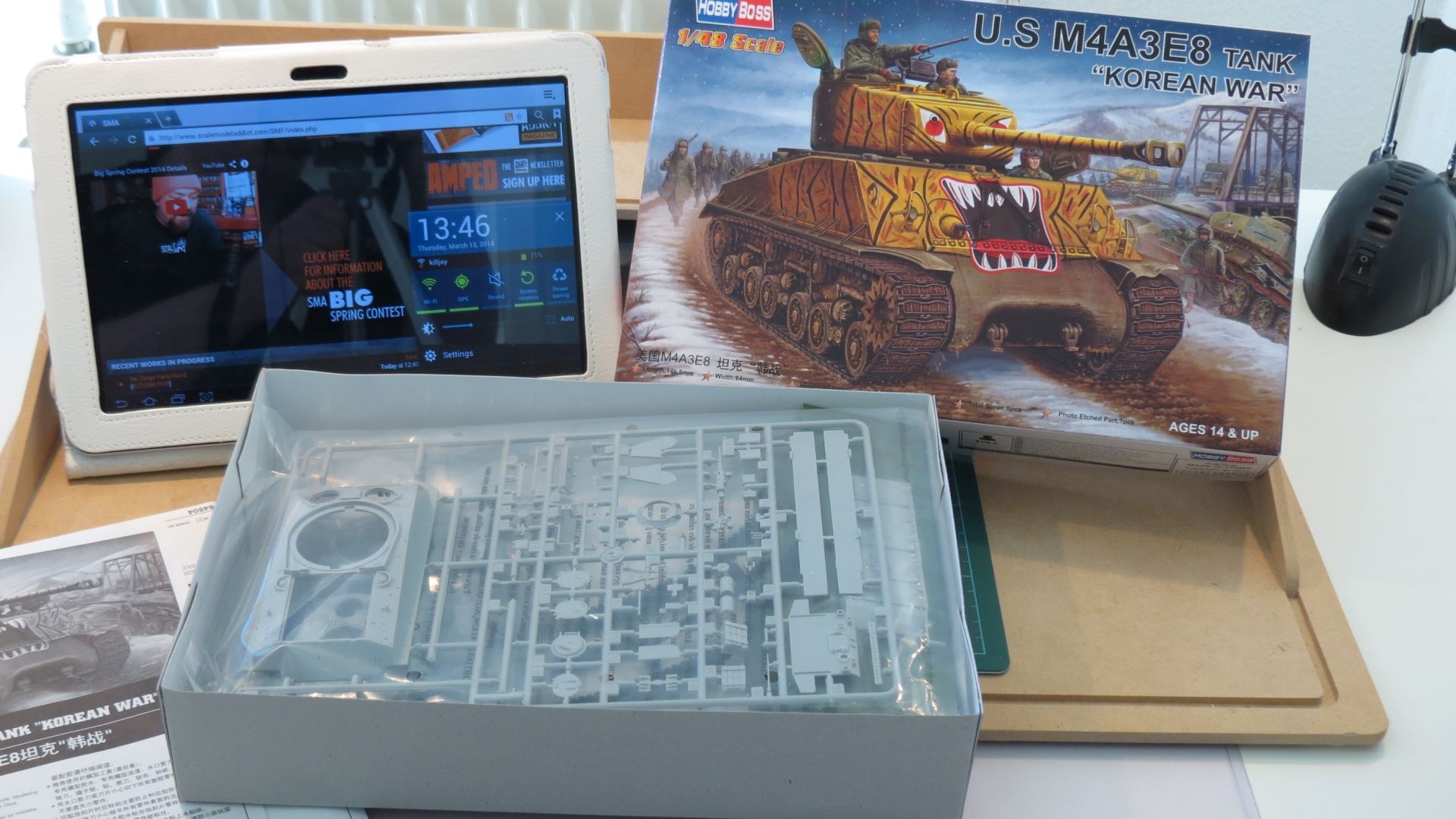 As I intend to use this for gaming, I decided to do a few modifications.

First of all, I wanted to add some weight to it. It just feels nicer to play with that way. To do this, I had to assemble and seal the lower hull.

Should be easy, but sadly nothing about this build has been easy so far. The fit of the parts is terrible, requiring plenty of sanding in some areas while leaving big gabs in others.

The front was one place where these gabs were pronounced. That wouldn't hold up to what I was planing to do, so I installed a bulkhead to seal off the front of the hull.

I also mounted part of the suspension in order to seal the holes in the side. Not that that it helped much, mind you, as there's still a mysterious row of holes that I'm not entirely sure what's supposed to be?
So that too had to be sealed up.

Adding a bit more sealing - a bit of left over plastic and plenty of glue - to the rear and I was just about ready to add some weight. 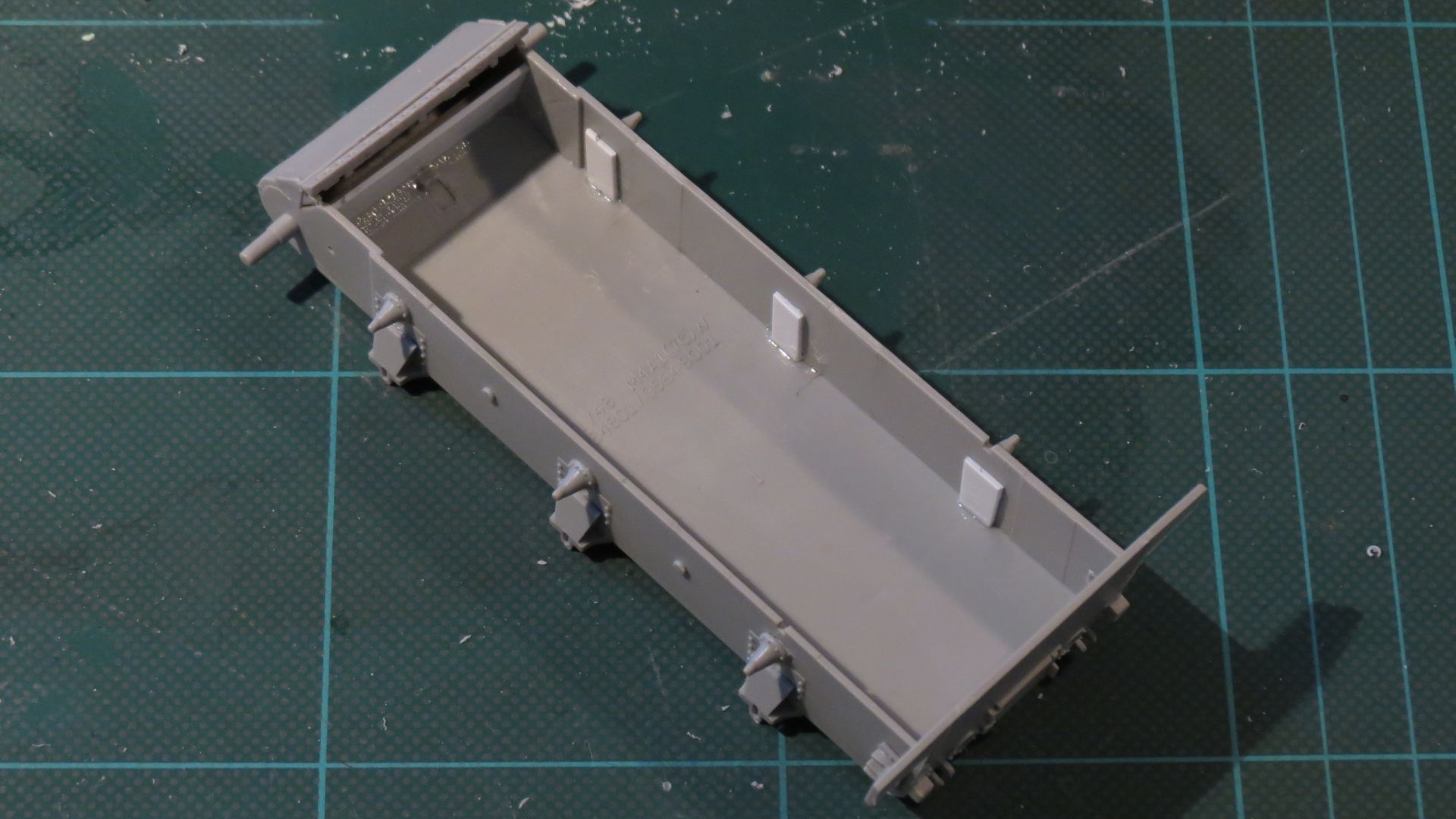 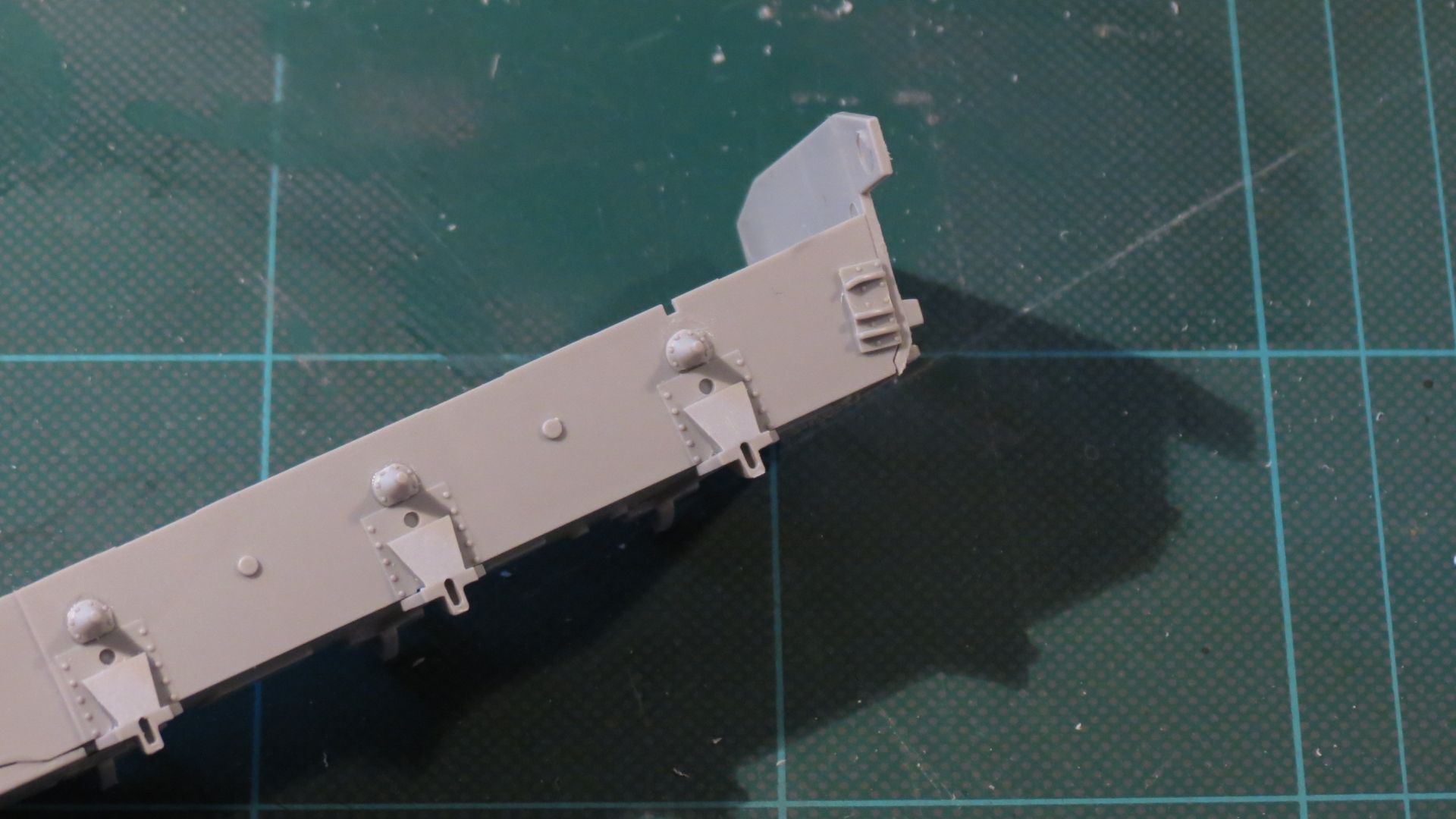 Now, the way I add weight is pretty simple, though a bit messy.

I've bought a jar full of BB-balls - the heaviest I could find - and these I simply poured into the hull.

Once that was done, I covered them with a mix of white glue and water - about 2:1 ratio, but that's hardly important. The water is basically just there to help the glue flow in between the balls.

After a couple of days, most of the water will have evaporated, leaving a sticky rubber-like goo containing all the balls.

Do keep in mind though, that it might take weeks before all the water's gone. And until then, glue might still leak from pockets inside the goo. 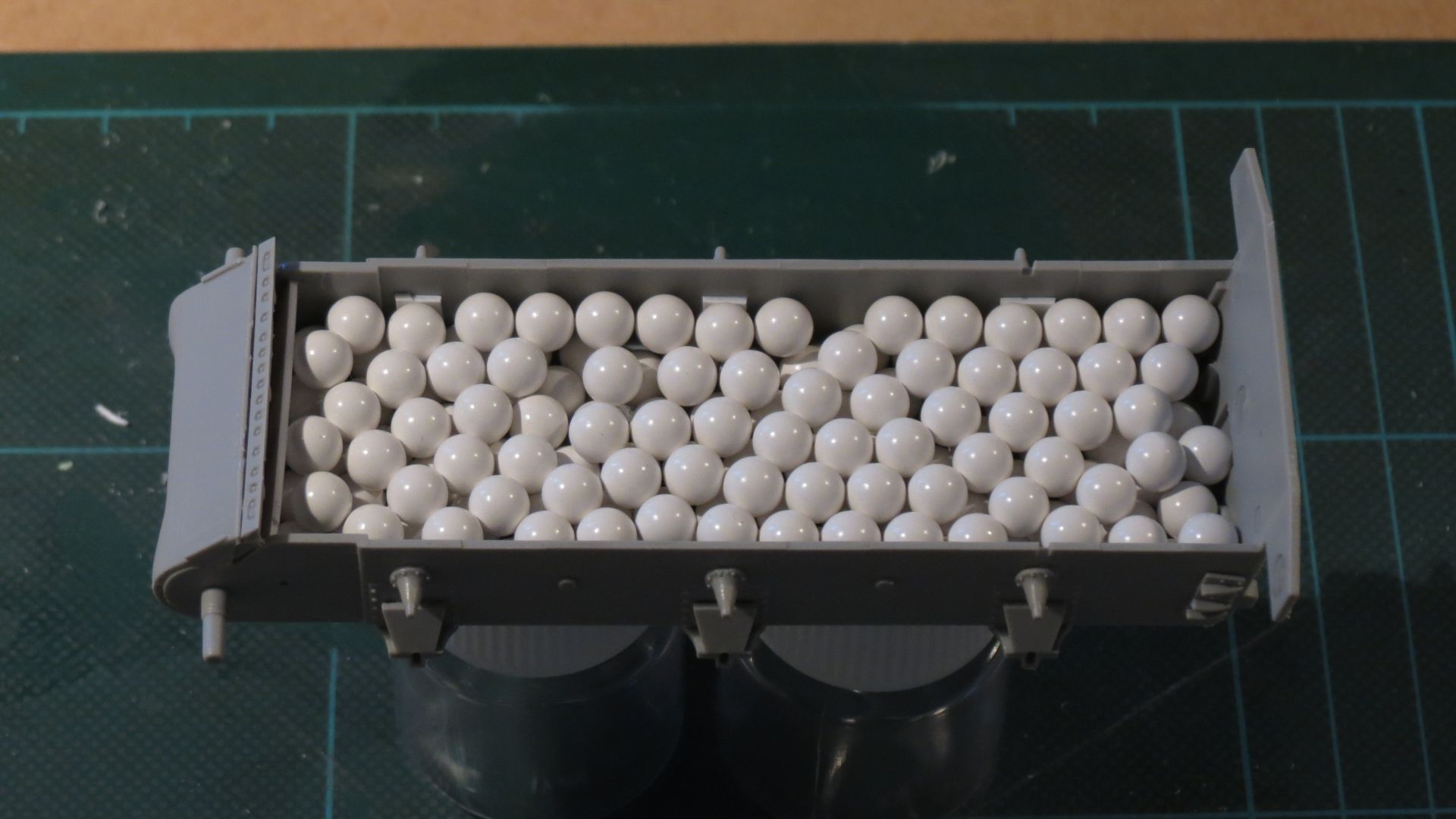 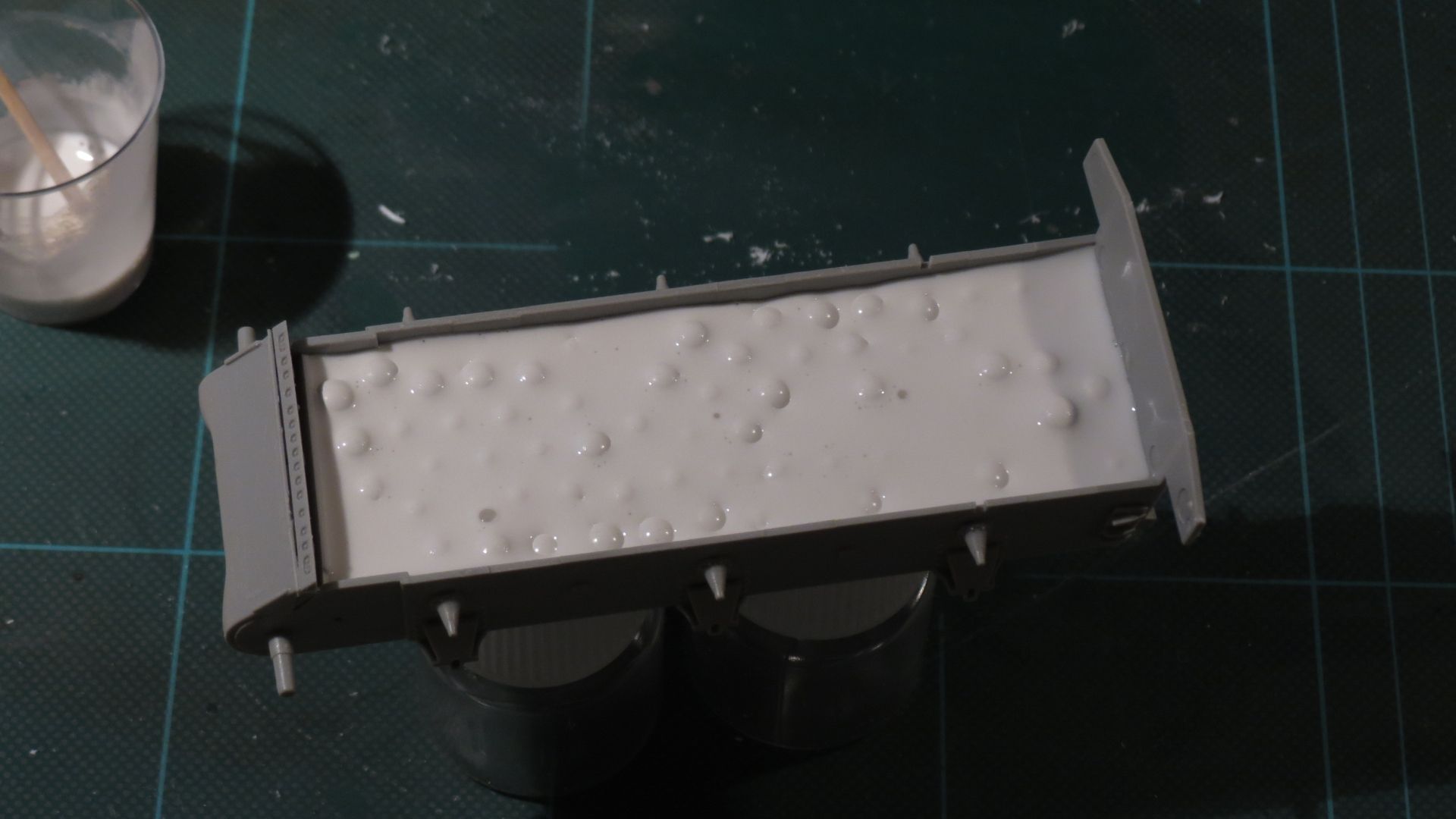 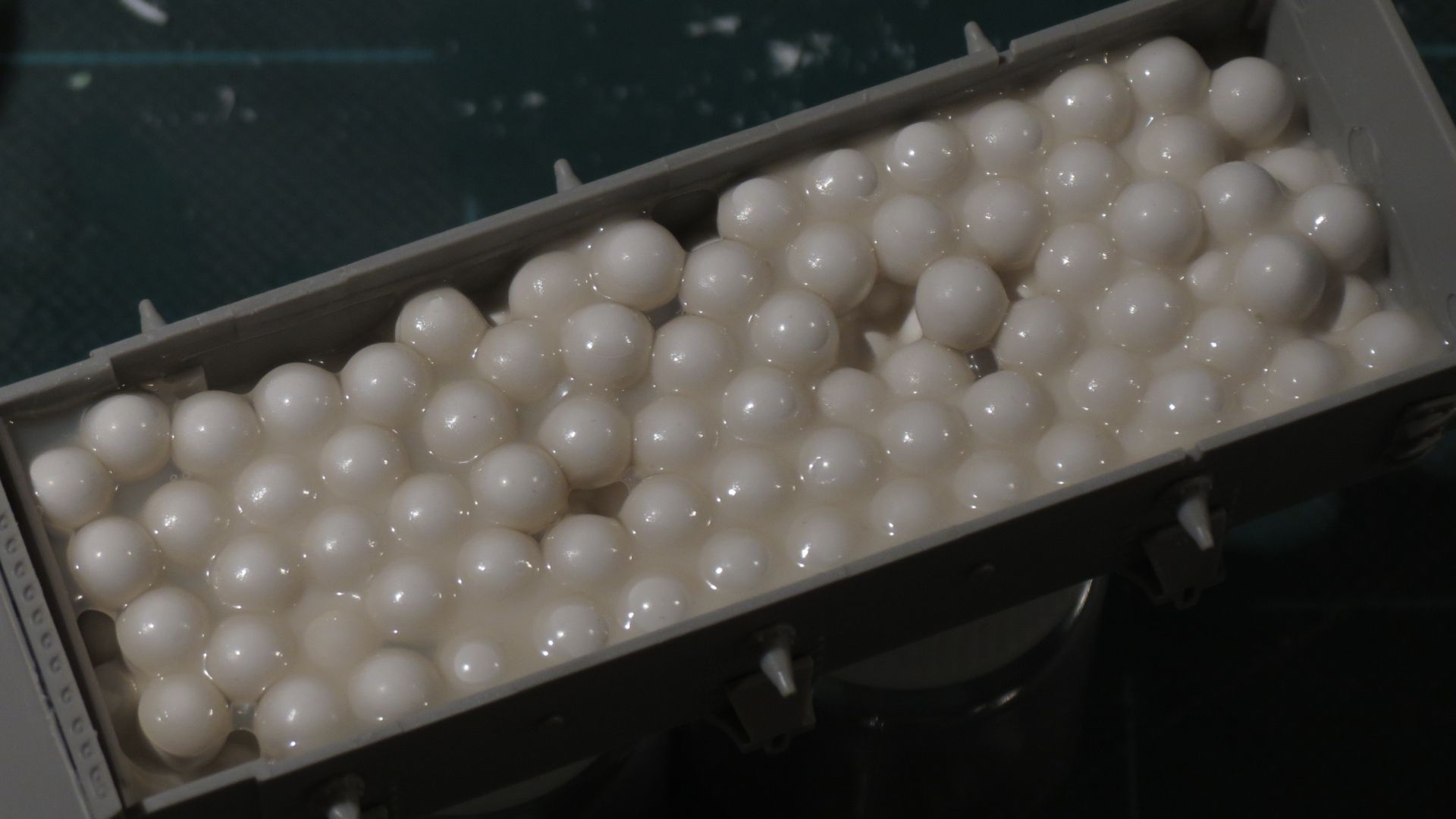 While that was drying, I build the Phaser for the small remotely operated turret.

And then I changed my mind. Which probably won't be the last time during this build...

I just couldn't get it to look right. It works on the Comet as that has a low box-like hull. The Sherman, on the other hand, is rather tall with all sorts of rounded edges and odd angles.

So I decided to mount the Phaser in the turret instead. Not a particularly difficult task - just drill out a hole where the normal gun should be - but it wasn't exactly as planed. 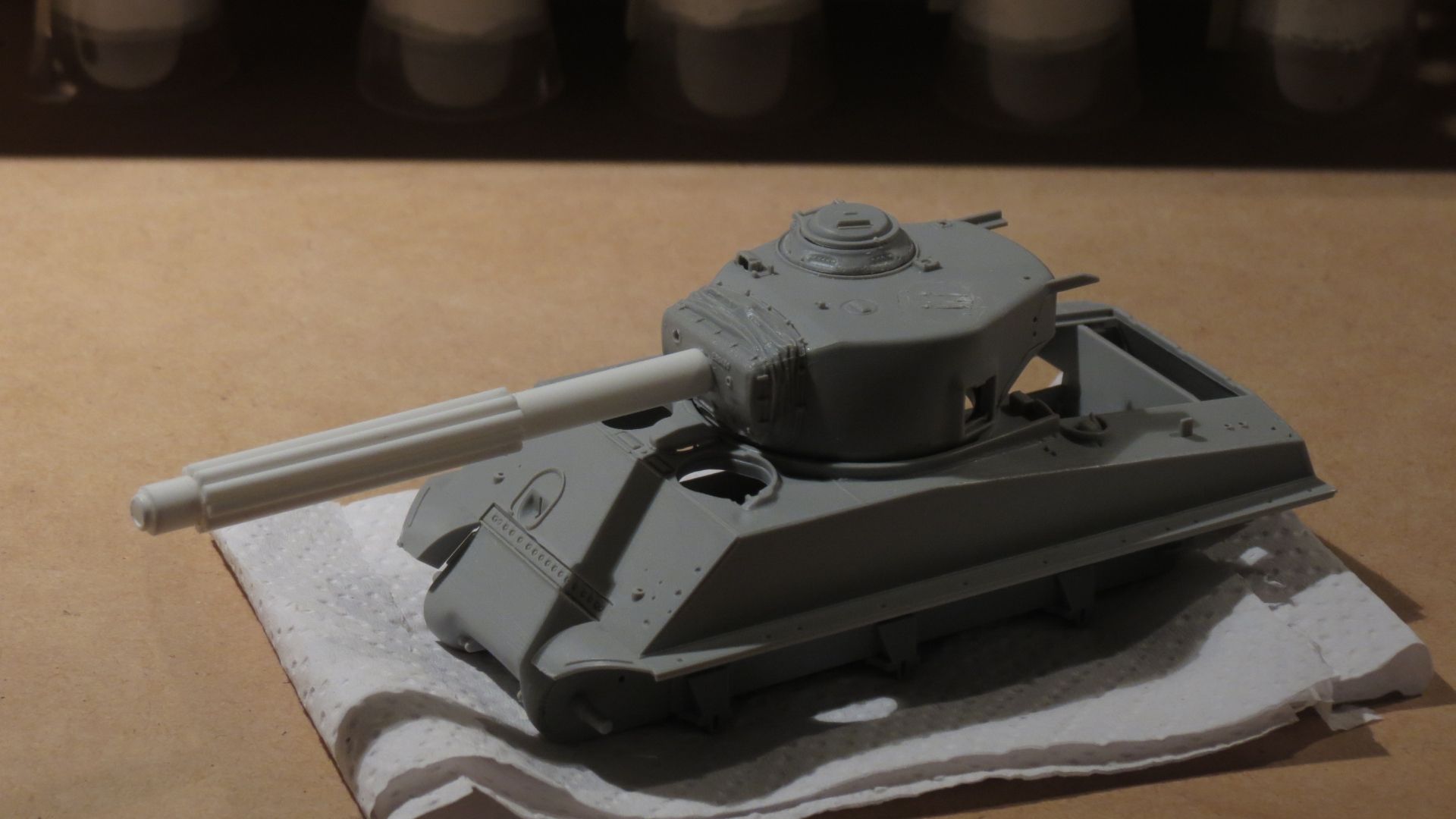 Looking forward to how this comes out.

Cheers guys. Glad to see a bit of interest in this - I was afraid this might be "too far out" for this forum.

Anyway, not much to show yet. I spend last evening sealing the inside of the turret with prodigious amounts of greenstuff. Well, greystuff in this case, but that's just a minor detail...

Remember what I said about nothing fitting? The turret was no exception. It's assembled from a top and a bottom half, but there are plenty of gaps where the two parts meet. Mostly, I feel, because the sides are so thin that it's hard to get a good contact between the parts when gluing them together.

Oh well, that should be taken care of now. All I need - and I use "all" in a very lose sense here - is to do the same job on the outside of the turret, using brownstuff to seal the gaps before sanding the whole thing down. Then, with a little bit of luck, I can start working on the exterior details.

Once that's completed, I'll have to finish the turret by adding some weight to it. As it turns out, the Phaser is so heavy that the turret tips forward. You can see it in the final picture how the turret leans slightly forward when pointing straight ahead. But when turned sideways the turret simply tumbles off. So that needs to be taken care of too.