Hey all, better late then never, and now that CAMS is over with I can actually start something for the SMA contest. Whether I finish it before the end of June remains to be seen!

Here is the kit I am building:

Model King (re-release of the old AMT kit), with Powerslide decals for the Darrell Waltrip (one of my favorite drivers) scheme from '76/'77.

Here is an old picture of what the car looked like;

Other than it being mostly a white car (I hate painting white), should be pretty much straight forward.

oh ya that is a sexy looking beast, looking forward to it Scott

I am thinking that because I hate painting gloss white, that I am going to try the flat white/white Primer and gloss coat trick.

Of course that presents it's own problems as well...painting white paint, on white plastic....

You could mat coat it first

alright looking forward to this one!

Moved this from the contest thread to automotive.

Another contest, another year, and another unfinished kit by deadline. One of these years I might learn! LOL

Chassis, interior and engine are painted. Got to do some detail, get the body painted, and decaled....all in 2 weeks, would like to get it finished for the Atlantic Nationals!

Cool stuff. Keep working at it.


Elm City Hobbies said:
I am thinking that because I hate painting gloss white, that I am going to try the flat white/white Primer and gloss coat trick.

Of course that presents it's own problems as well...painting white paint, on white plastic....
Click to expand...

How about, light gray prime first, then white over that. Just to be sure that you are getting good coverage.

OK....chassis done. Nothing fancy, OOB, as most of it will be covered up and can't be seen anyway. 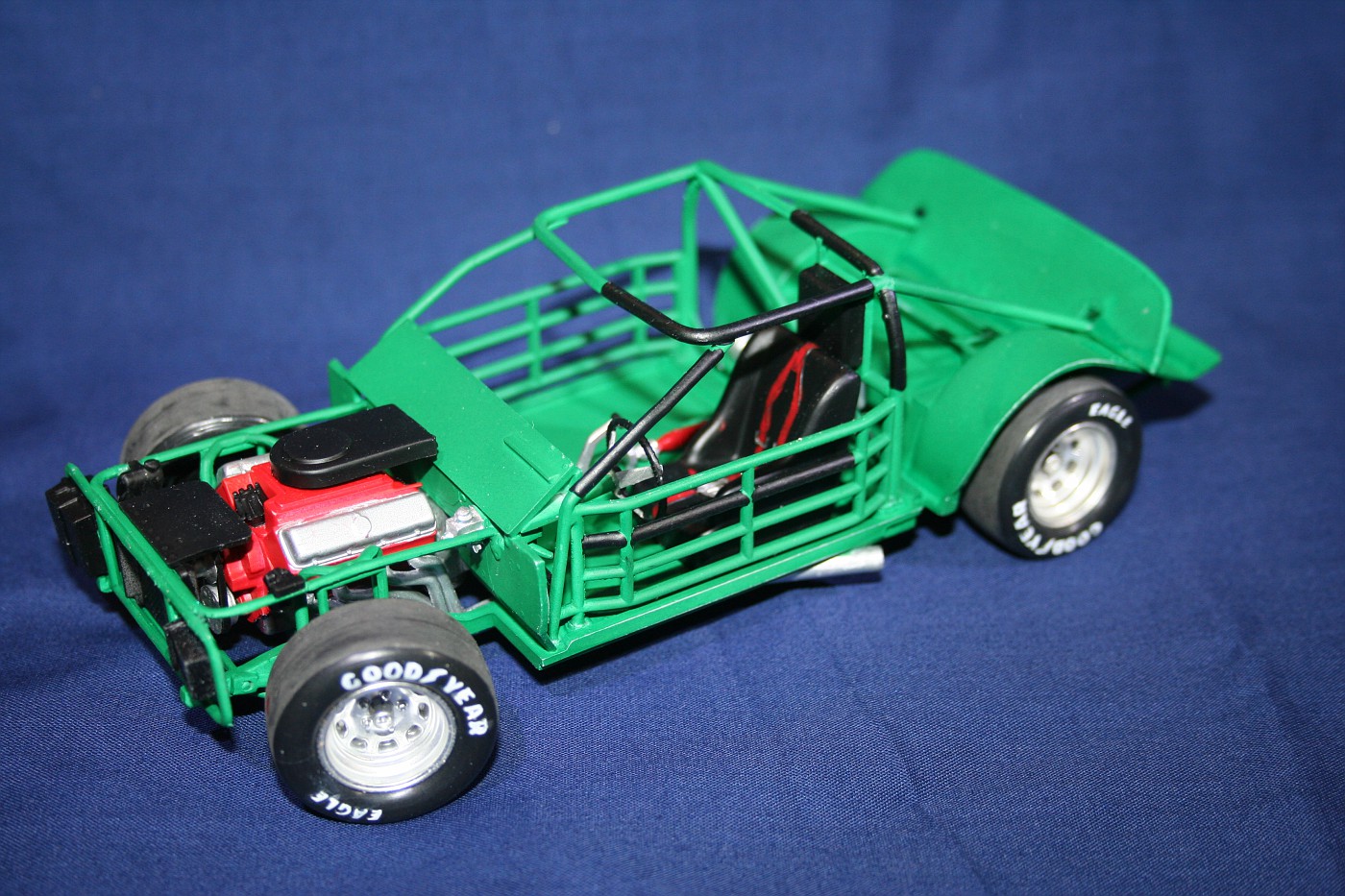 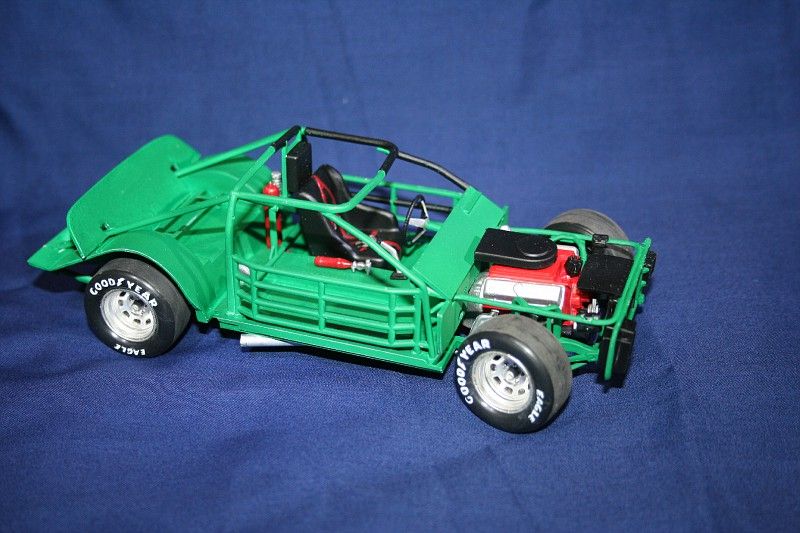 Only thing I did differently is instead of the wheels and tires that came with the kit, I used a set out of a Monogram 1/24 stock car kit. The kit tires have a funky tread pattern on them, that was done away with long before the '76 season (which is where this kit is based from), plus they are a little small for the wheel wells. The 1/24 wheels and tires fill out the wheel wells better. There is a heat shield that goes between the engine and the firewall, but leaving that out as it really doesn't fit that well, and again, not going to see it unless the hood comes off, or someone looks into the front wheel well, so it gets deleted.

Body....well I should have done a little more research with the decals, as where the decals go over where the door handles would be, there is no cut out in the decal for the plate that goes over where the handle would be. Reason for that is the Daytona and Talladega cars wouldn't have a simple plate welded over the door handle hole, as it would be flush to the body to decrease drag. And apparently the decal represent the super speedway cars. Either way, will make it work some how.

Now, plastic on this kit was white. Base color for the car is also white, and as I said before, I hate painting white as it is probably one of the hardest colors to paint and look good. So tried something I read somewhere.

First off, cleaned the plastic well with some mild dish detergent.

Primed the body with Vallejo White primer, and let it dry. There was a slight color difference between the plastic and the paint, so wasn't as bad to see where the paint was and wasn't on the kit. Once dry, 2-3 coats of Future, which brings us to here: 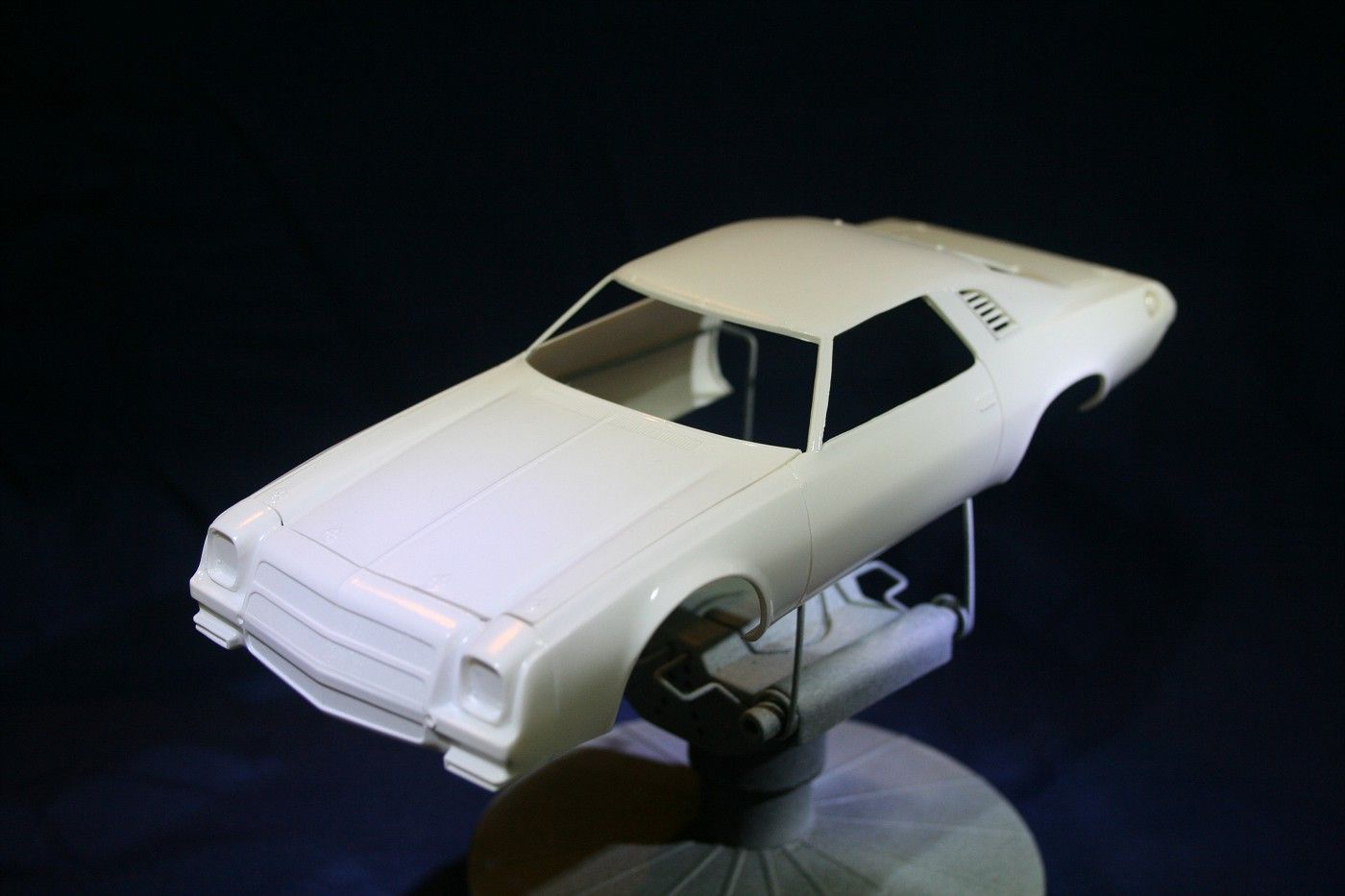 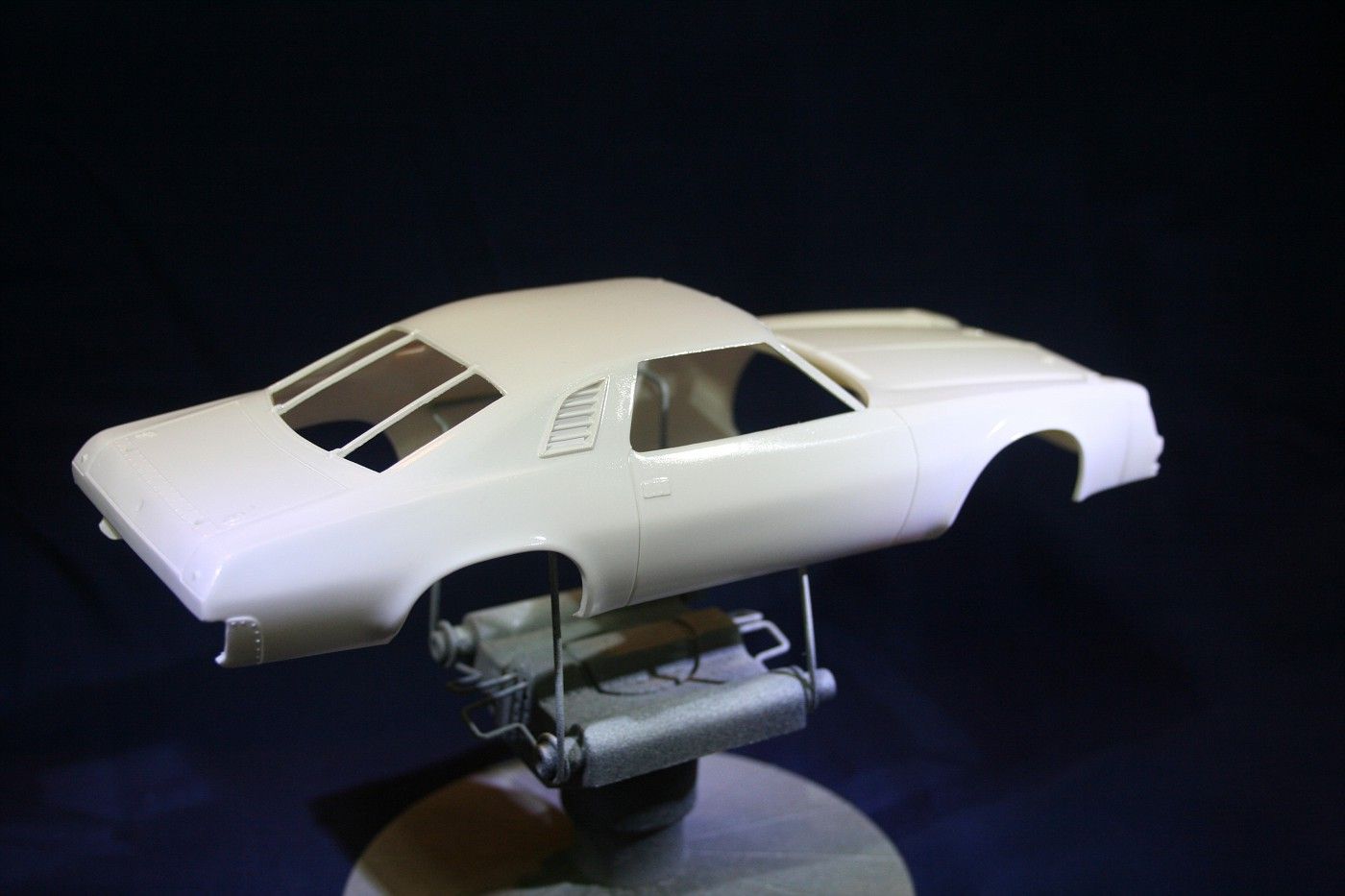 Tough to pick up in the photos, but even with only 2 light coats and a medium coat, the Future has a pretty good shine on it. Now it is decal time, which I will hopefully get done today. Then into the booth for another couple of coats of Future to seal in the decals. In this era of Nascar, the graphics were painted on, and not the fully body decals you see today, so the car would have an even gloss over the whole thing. This would also make the car "slicker" through the air. Once the future is dry, just a little BMF around the window frames, insert the windows and put the body on the chassis. And hopefully all done by Thu/Fri to go to the Atlantic Nats this weekend coming!

wow that was fast...

spud said:
wow that was fast...
Click to expand...

LOL...not really.....started it just after the CAMS show at the end of May

oh lol i taught you hadent started it at all

Well in between customers (which was dicey as one came just as I was putting one of the big side decals on), and the rest of the regular parts of the day, decals are on. 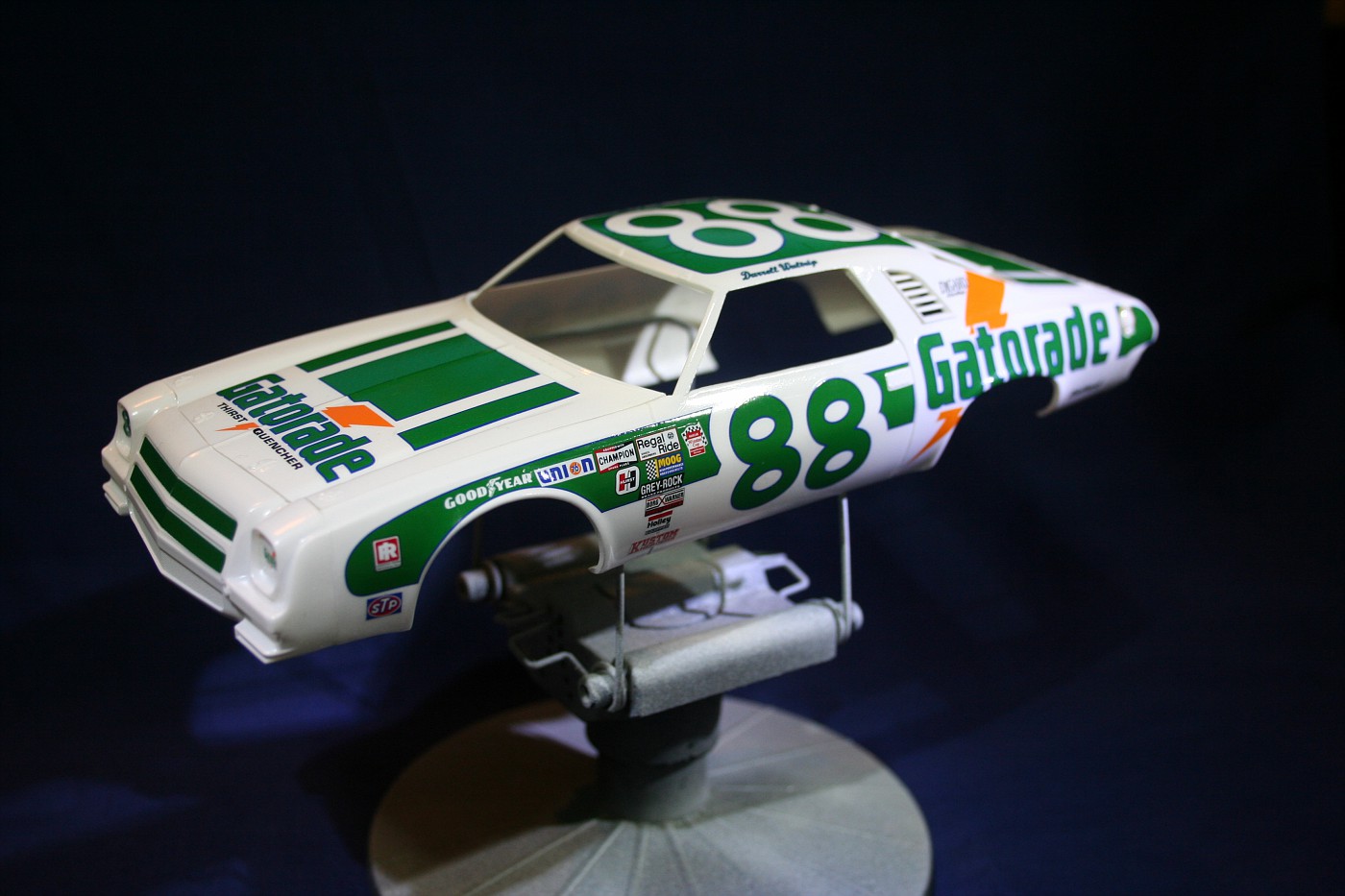 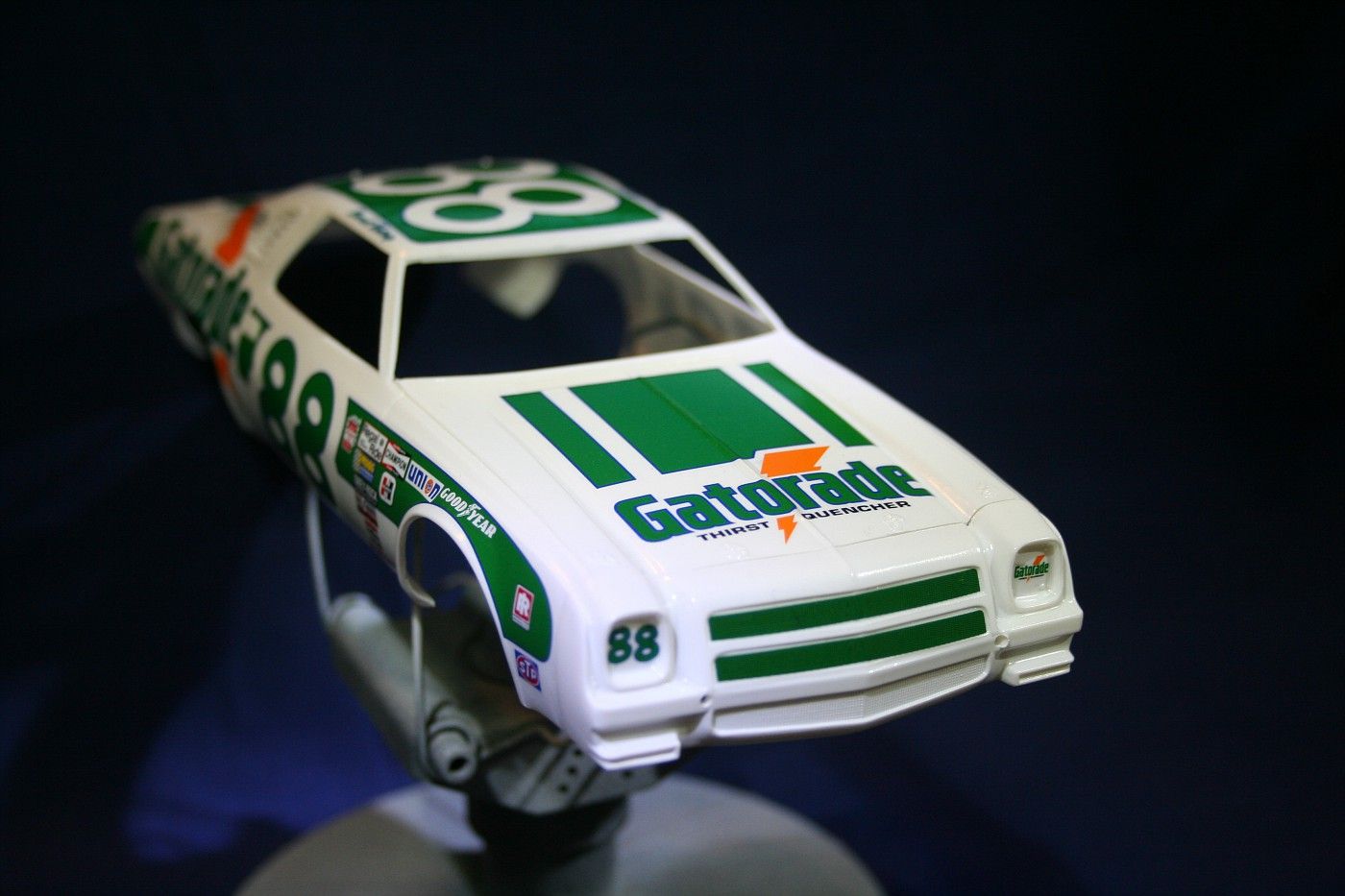 The big decal on the top had a few wrinkles in it, so a light slice and more Micro Sol. Let it dry over night and check it tomorrow, may need another application.

All in all, not perfect (what model is), but looks the part. The decals don't have the cut outs for the fuel filler area and the plated over door handles, so had to very gently cut them out of the decal once on the car. Door handle areas aren't too bad, but where the fuel filler is, is a little rough. But nothing I can do about it now.

Hopefully the roof decal will settle by morning, and I can then hit the whole body with more gloss (future). Few small detail items need painted, then glass and bumpers, then it is just body on frame, see if the front tires will turn in the wheel well and glue on the steering linkage.

Did forget one piece on the car....lol....the driveshaft. Never even came off the sprue.....oh well, not going to see it unless you pick it up anyway.

Scott that is Fantastic

[me=spud]is well impressed with this [/me]

Tout fini............for those that are French challenged that would be All Finished.


Body is just sitting on the chassis. I some how managed to glue the steering linkage on in such away that the front wheels are still steerable....not really sure how I did it, but I am not complaining. 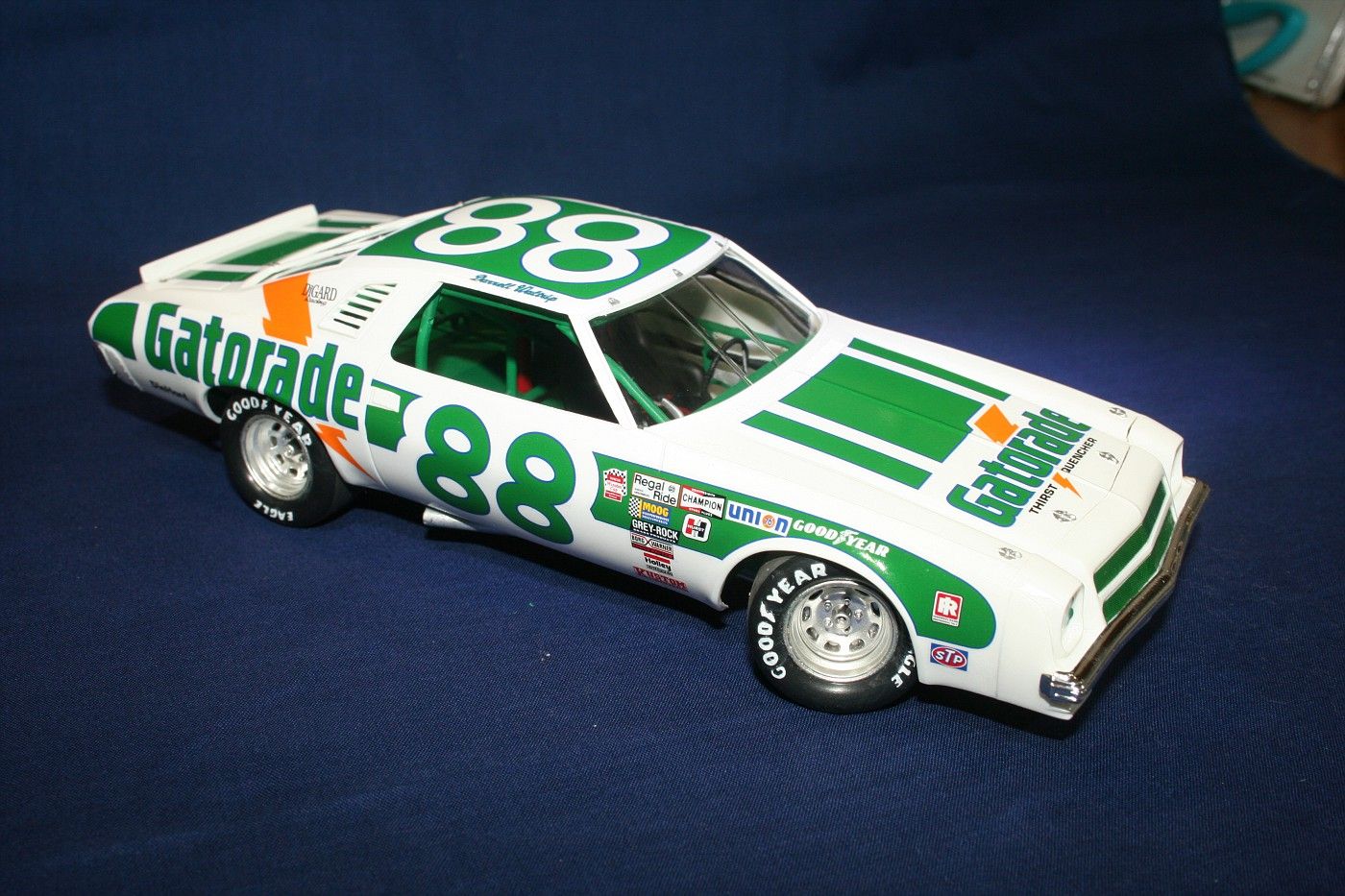 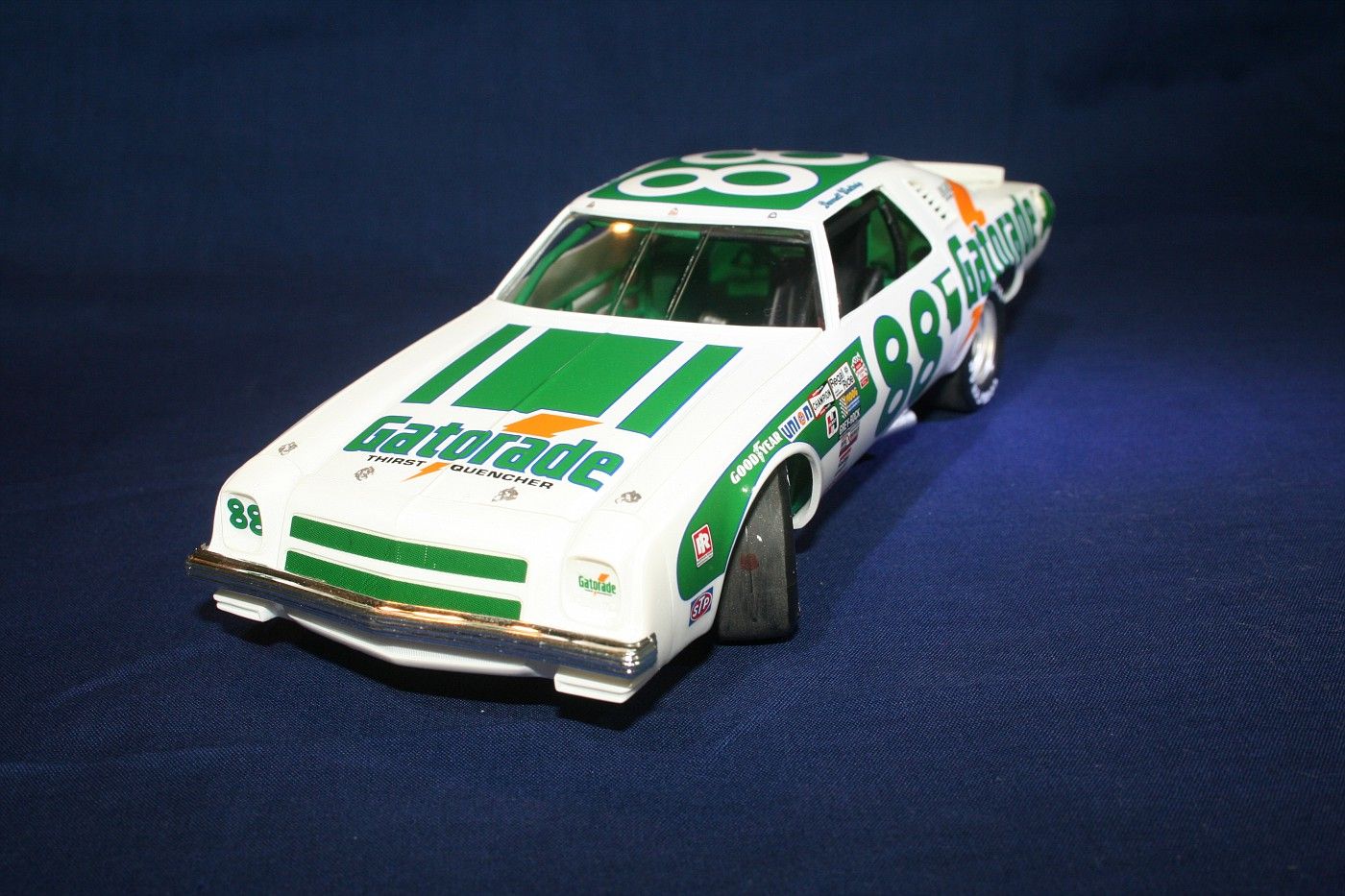 Just noticed the red dot on the tire....I know I marked them for some reason, but not sure what they reason was. LOL May have to give it a little sanding to get rid of the dot as it sticks out like a sore thumb....either that or turn the wheels the other way! LOL 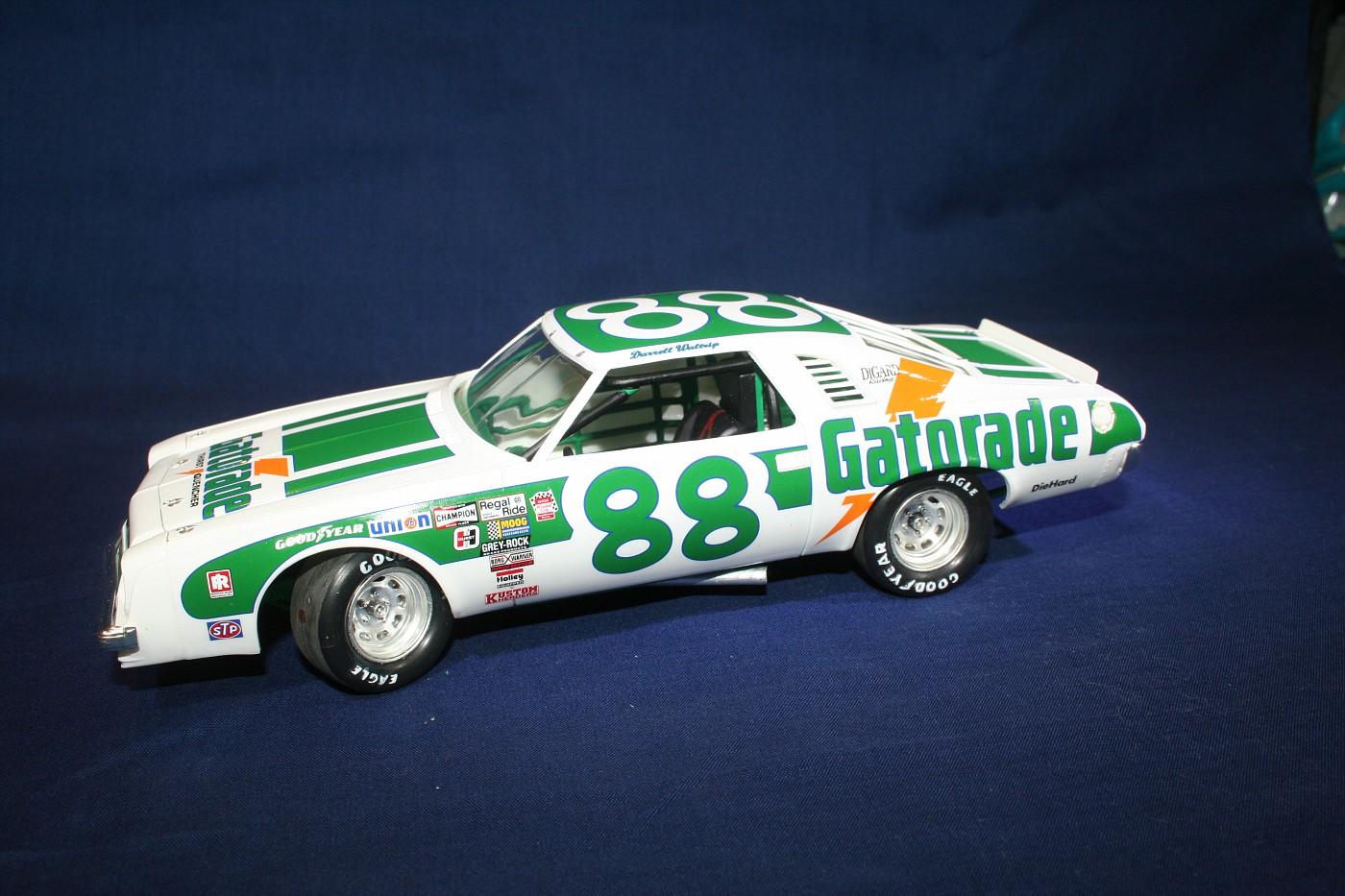 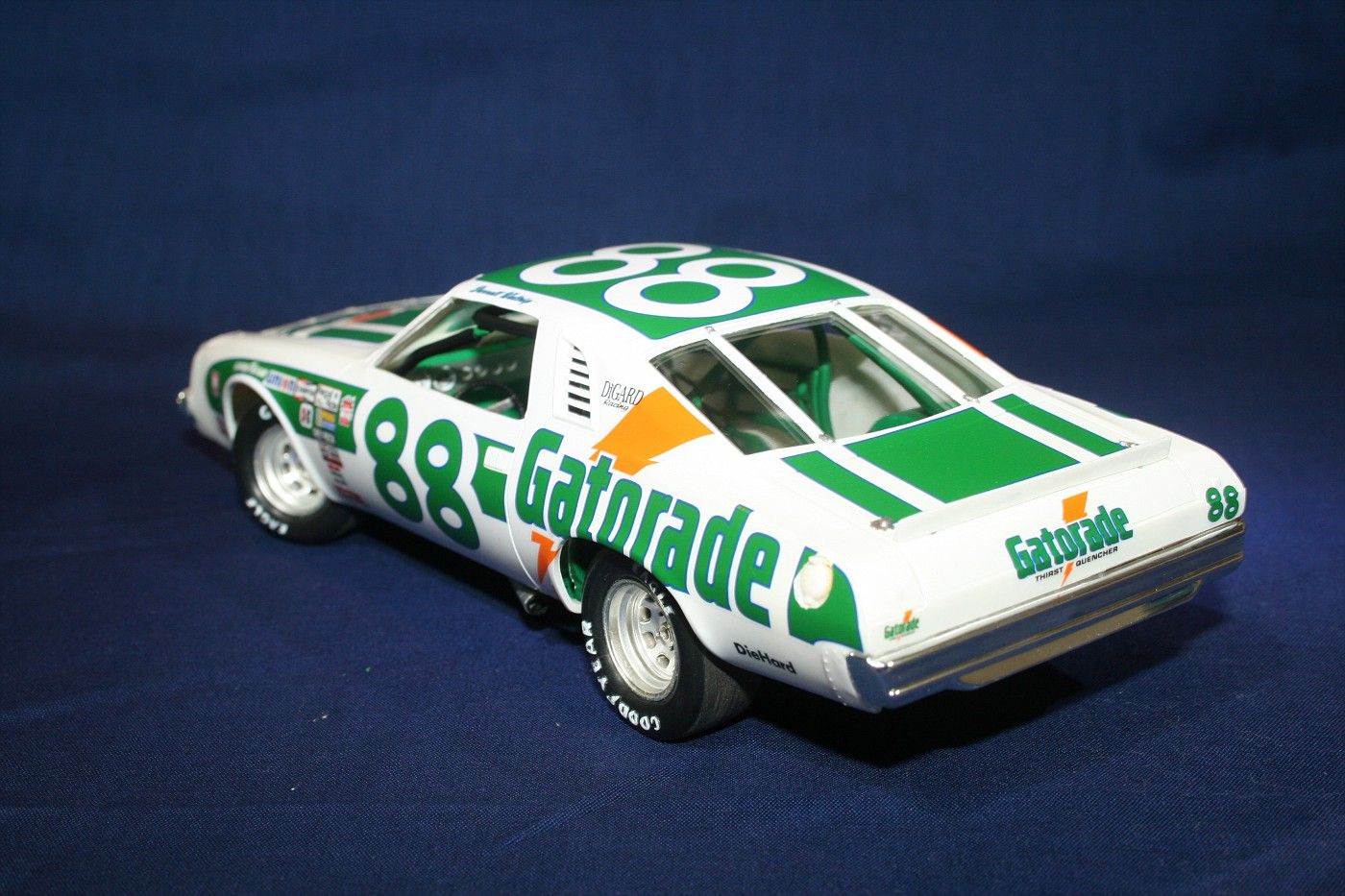 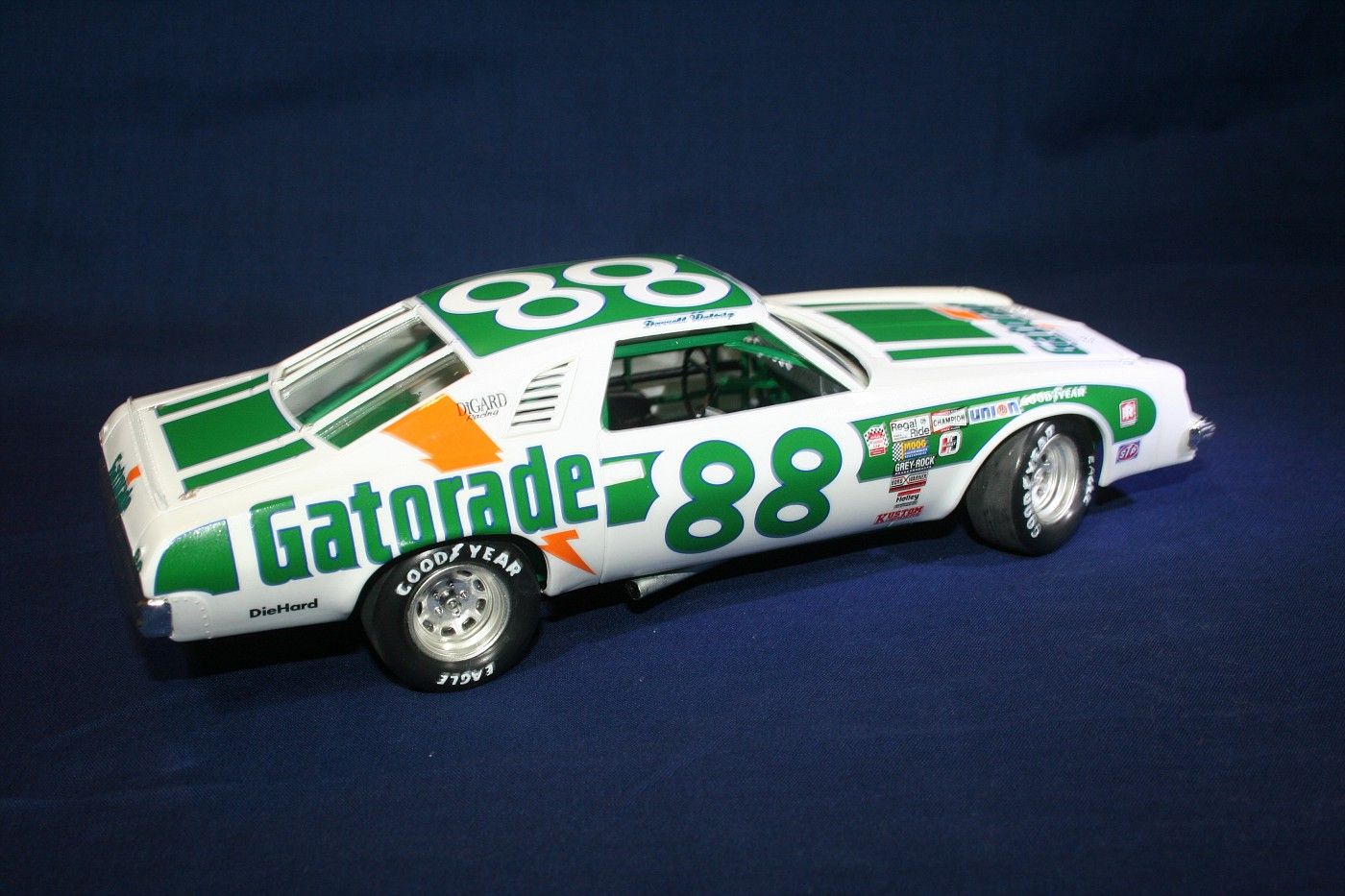 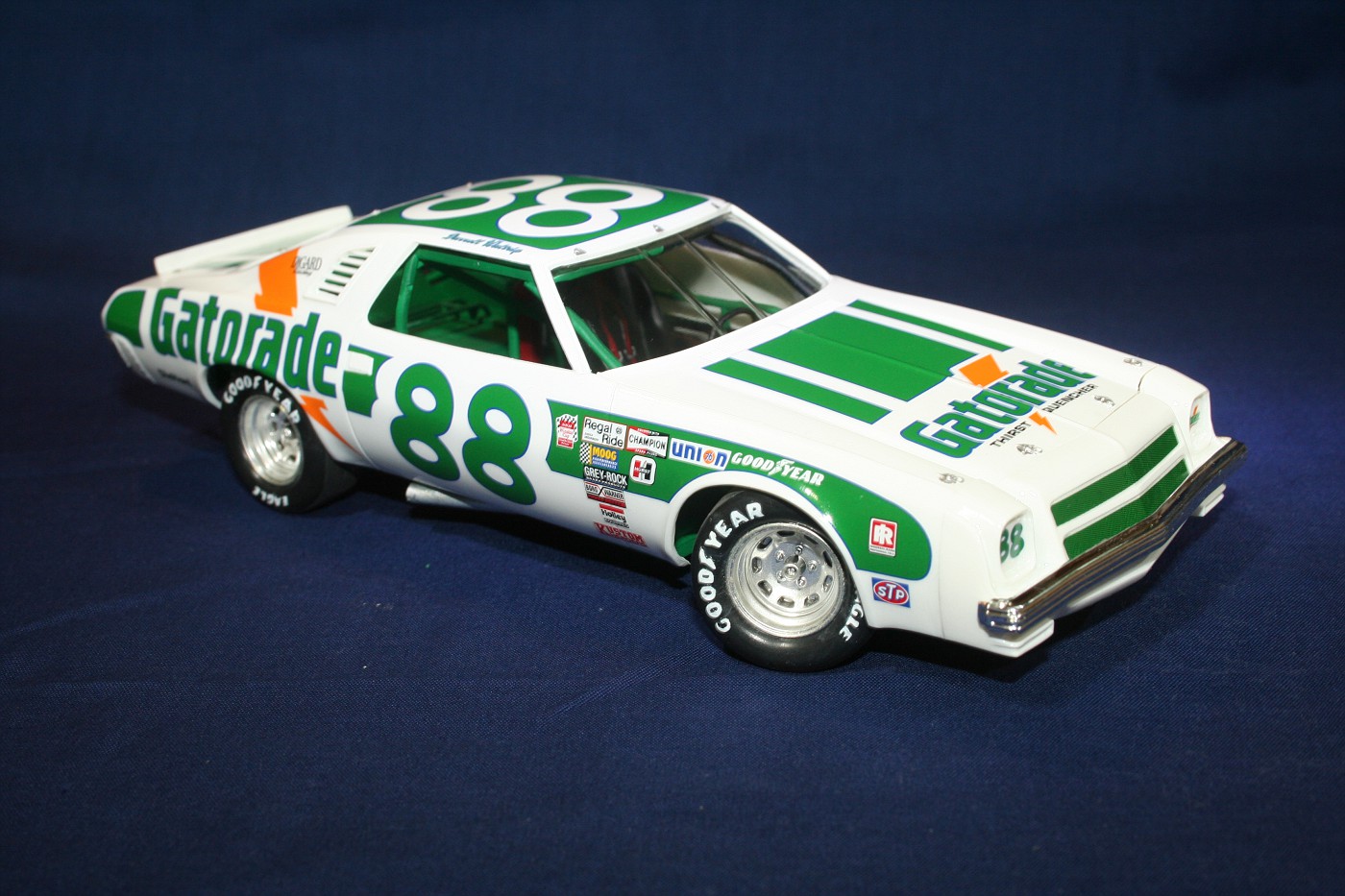 Been awhile since I have done a Nascar kit....don't know why I waited so long (12-15yrs at least), hopefully the next one will be a little quicker!
You must log in or register to reply here.
Share:
Reddit Pinterest Tumblr WhatsApp Email Link