Here is my War Wheels GB entry, Trumpeter's 1/35 Canadian Army LAV-III. To this Im adding a Black Dog LAV-III accessory set and some brass antenna mounts, all purchased from Elm City Hobbies. I will try to depict a LAV-III deployed to Afganistan. As of right now, I am undecided on the "T" antenna mount. I may try to scratch build a mount using evergreen stock or I may opt for the Real Model pe set for the "T" mount. If I find any photographic eveidence of CDN LAV-III in the 'Stan with the normal whip antennals, Ill go that route instead. 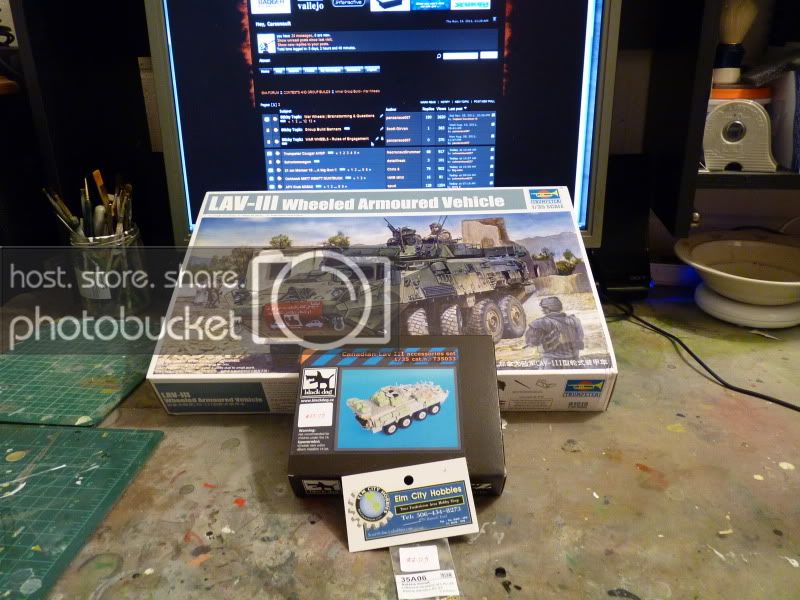 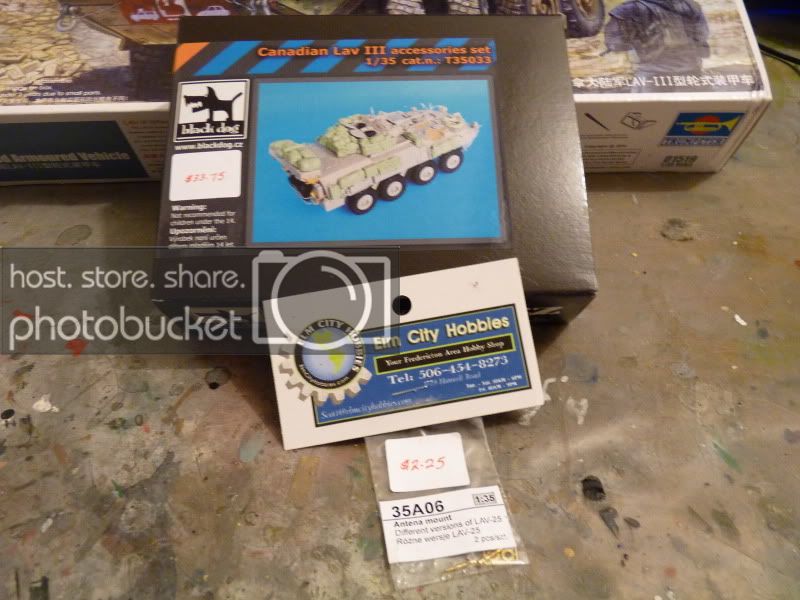 Im not gonna go into a full review of the kit except to say its a beauty of a kit. Trumpy's Stryker series LAVs are quite nice to begin with, plus add the parts needed to make an out of the box Canadian LAV-III and what is there not to like. Oly thing really missing is som stawage gear and maybe a few figures, I suppose that is what the aftermarket is for, One thing I find odd is the option to display the drivers windscreen in place but there is no inerior detail to see behind the glass. I may add a rear and side bulkheads to the drivers compartement to fill the void a bit. 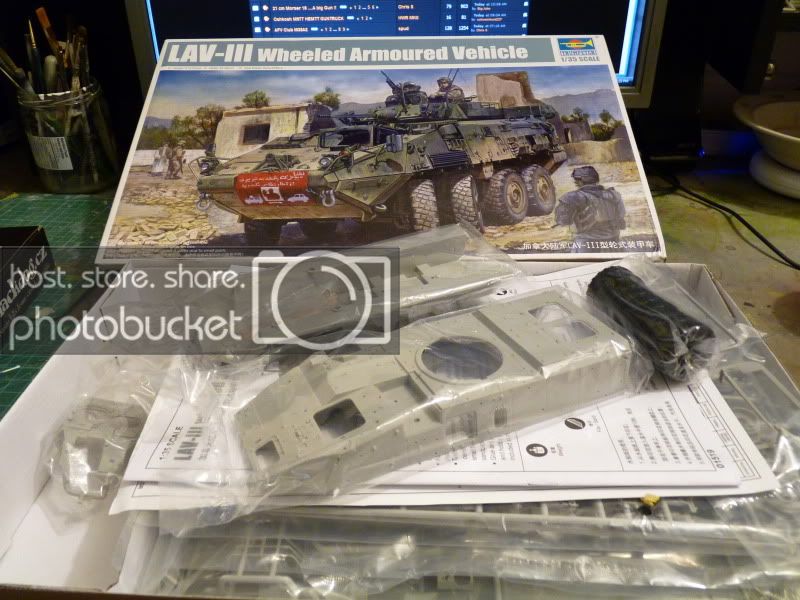 Thanks, Im looking forward to it too...

Got the kit about a year and a half ago when the kit came out, and I put it aside, waiting for the right time to start building it. Every few months, Ill pulled the box out of the stash to peruse the instructions or look at the fresh sprues sealed in thier bags. I was gonna wait til I finished the Sufa but I needed a break from it anyways. So last night, I finally cut open the bags with the hull sections and the A Sprues abd B sprue and started building. Didnt get very far though when I noticed a part missing. One of the bump stops for the rear suspension was not on the sprue. I double checked in the box and parts bag, no luck. It looks to me like the part may have gotten stuck in the mold and was in advertantly left behind. You can see that one of the sprue gates was partially rounded whith just a thin spot of broken plastic. I emailed Scott from Elm City Hobbies right away, he replied to me today saying he'd been in touch with the sales rep, they will send me a replacement with next months order. Thanks Scott!

So in the mean time, I will work around that, and maybe do a few other sub assemblies and prep the resin stowage parts.

atleast Scott always there to help. Its always a good thing to check on the sprues to avoid problems in the future.

Hay I didn't know that Elm has those antena mounts. This will be a grate build, Yes Sir!

Unfortunately none in stock at the moment :'(
C

Well, I have found a few pictures showing the regular antenna mounts so I think I shoul dbe safe enough going that route. I do haev a question though about many of the pictures I ahve found... What is the purpose of the clear water bottles strapped to the eantenna masts???

Carsenault said:
Well, I have found a few pictures showing the regular antenna mounts so I think I shoul dbe safe enough going that route. I do haev a question though about many of the pictures I ahve found... What is the purpose of the clear water bottles strapped to the eantenna masts???
Click to expand...

They stick an IR glow stick in the bottle, and tape it to the top of the antenna....shows up on IR goggles, good guys know not to shoot the vehicle.
C

Carsenault said:
Well, I have found a few pictures showing the regular antenna mounts so I think I shoul dbe safe enough going that route. I do haev a question though about many of the pictures I ahve found... What is the purpose of the clear water bottles strapped to the eantenna masts???
Click to expand...

They stick an IR glow stick in the bottle, and tape it to the top of the antenna....shows up on IR goggles, good guys know not to shoot the vehicle.
Click to expand...

I was pretty sure the T mount were in the kit ??? maybe I saw wrong !

what's those antenna mount you've gotten from SCOTT ??? is that home made ? in Canada or a speciality ???

http://www.luckymodel.com/scale.aspx?item_no=LF1225 might not be exactly what you are looking for
but better than Nothing....
C

Hey Norm, thanks for the inquiery.

Still building, and I have been taking pics along the way. Just havent had a chance to make any updates, will do soon I promise. I have the hull mostly completed except for a few small easy to knnock off bits and a few detail pieces that will need to be painted seperately. I forgot if I mentioned it, but there was a small detail piece missing from the sprue when I opened up the bags. A replacement is on the way but for now I want to hold off on the painting. I suppose I could start with some preshading and a few other things. The turret is in construction now.

Not sure of the make of the antenna mounts, bought from Elm City Hobbies, came in a little zip-lock baggie labeled with a sticker identifying the part name, number and intended vehicle. The parts are pe base and 2 turned brass antenna mounts. I already have one mounted on the turret, looks great.

Will also start prepping the Black Dog stowage set, I have already dry fitted one of the pices and it looks fantastic.

Oh, and no T mount in the kit, no problem though. The Hobby Boss Leo 2A6M does have them, but I will stick with the regular mounts for my LAV-III.

The Antenna mounts in the zip lock are from RB Models out of Poland....they make some really nice items (barrels for armor, aircraft and ships, among other things), for not much money.

They come just as you see them in the ziploc....so I just stick a business card on them for a hanger.
S

Will have to keep an eye out for those !

Nice to hear the progress is on the way!

I look forward to seeing the progress on this build as well!
C

I began with what else but the suspension and drive train. No real surprises there. A tip I learned from Scott at ECH is to attach the wheel backs early, that helps with the alignment of the wheels, very important when you have 8 wheels to keep staight. I didnt glue them on though so I would have an easier time airbrushing and weathering. In the second pic, you can see where the missing part goes , hope to get the replacement soon. 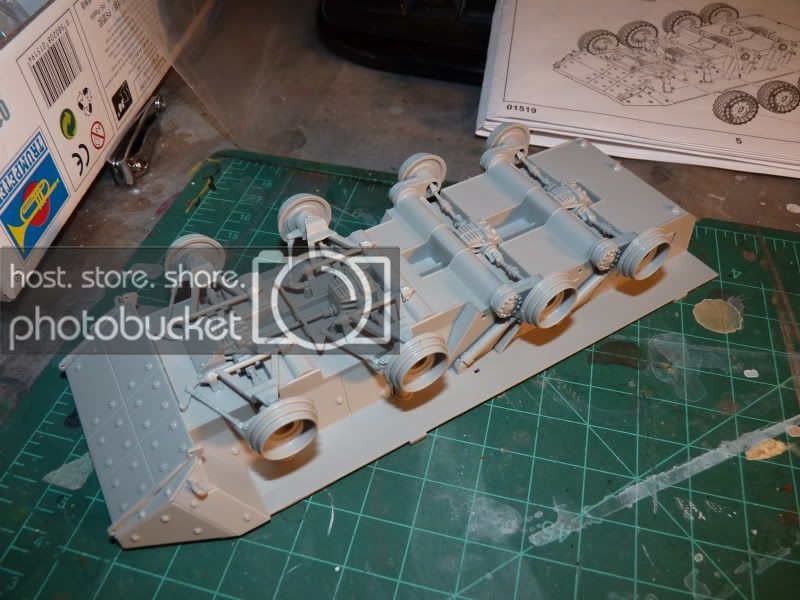 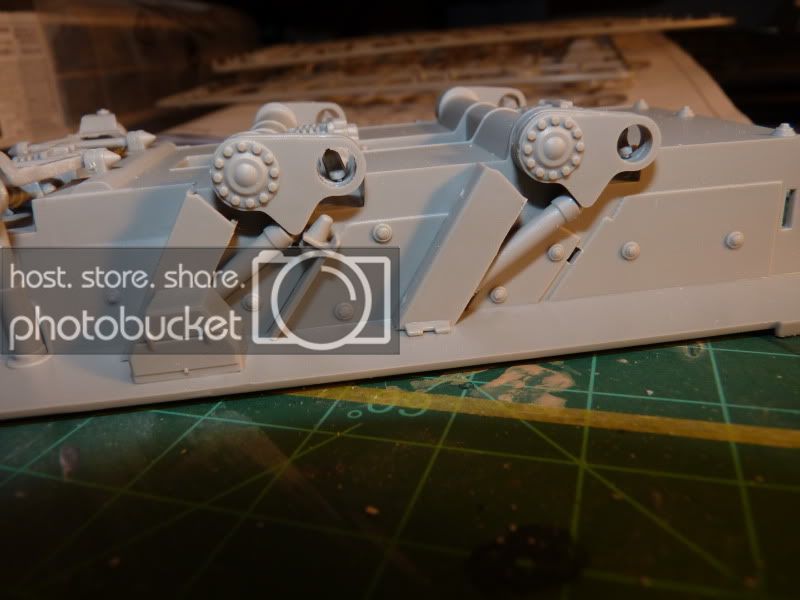 The aft bulkead and ramp were next, that was a fairly simple assembly except for some basic pe folding. I dont own one of them super-duper photo etch folding tools so I did it the old fashioned way, using various shapes of exacto blades and chisel tips to hold the parts down or bend them up. Leaving the tail light lenses off for now til after Im done painting the filter coat. 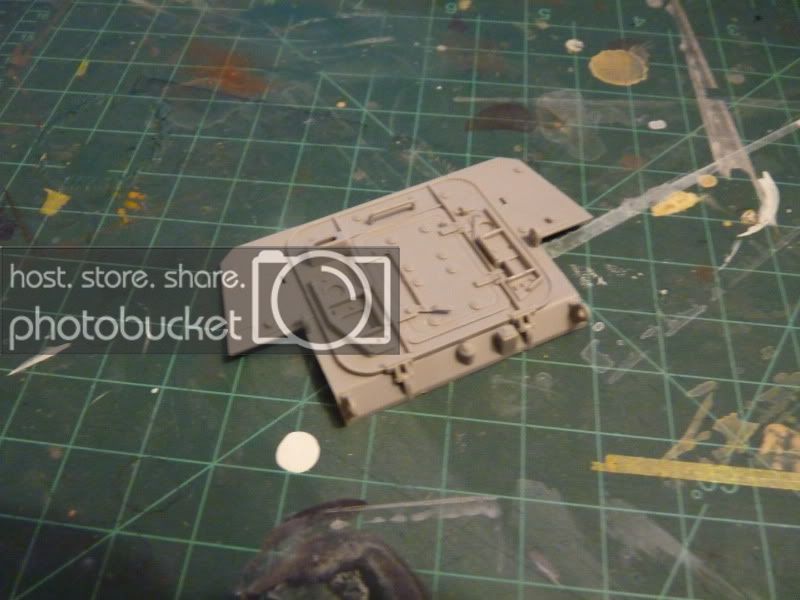 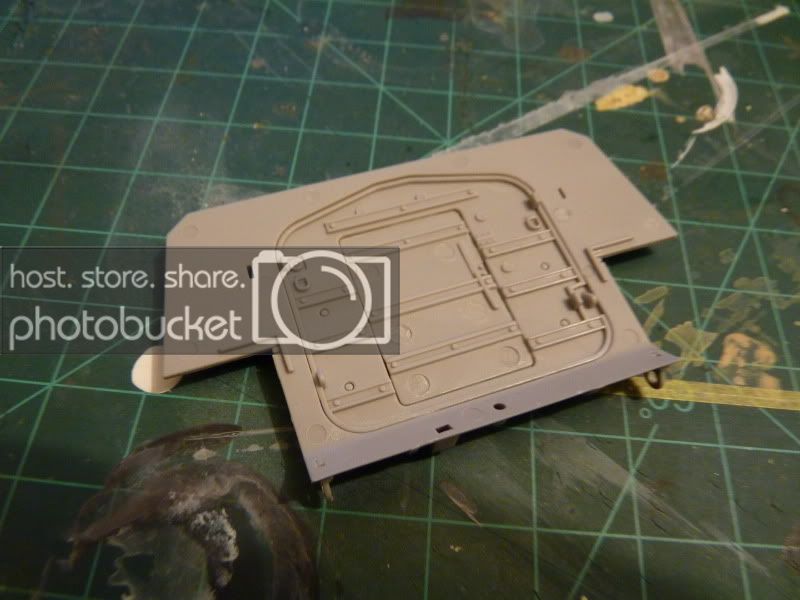 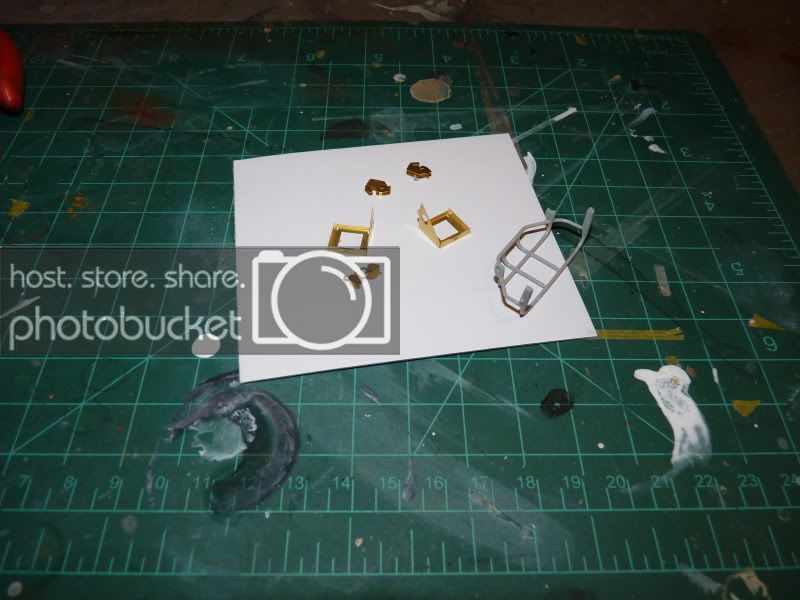 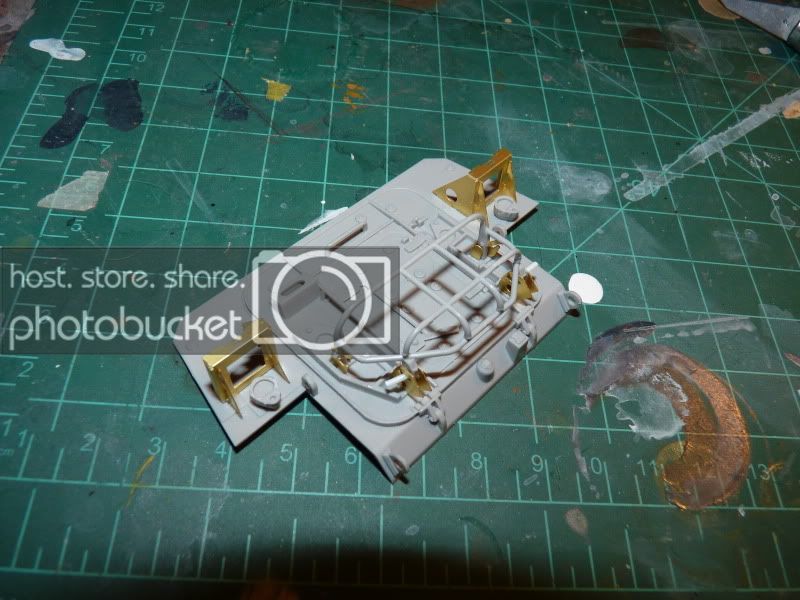 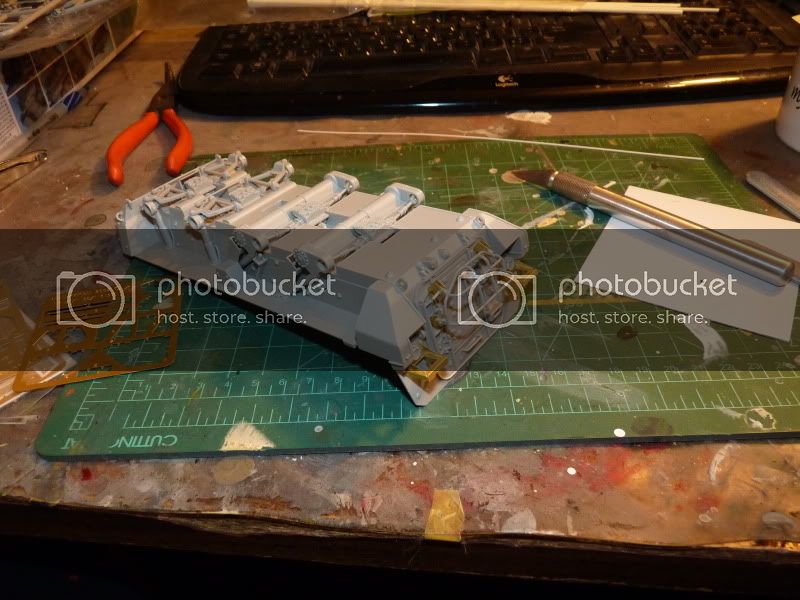 Next came the upper hulls of fine fiddly bits and photo etch to apply here. Options to have open or closed hatches, as well as the drivers wind screen. I opted not to open any of these since there is no interior to this kit. After I married up the upper and lower halves, I discovered the Legends has just released an interior set for Trumpeter Stryker that would have worked for this kit, oh well, maybe on my next one. 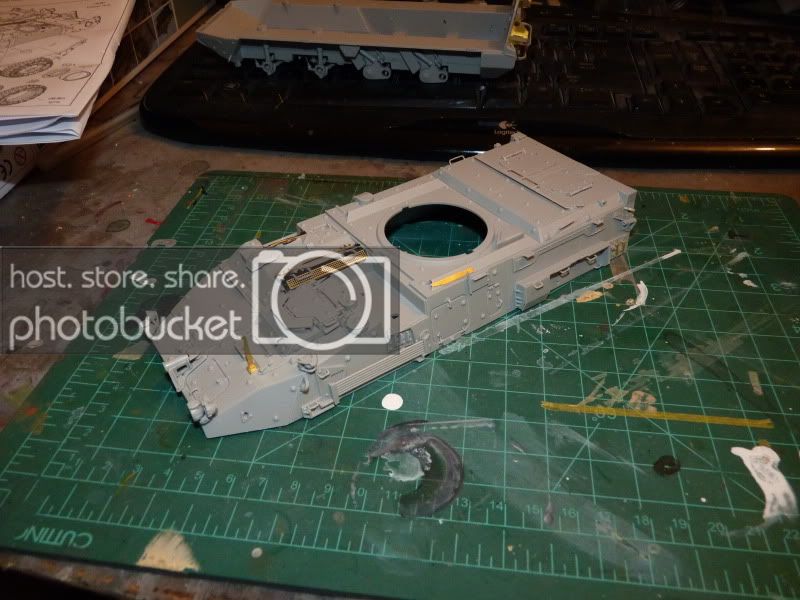 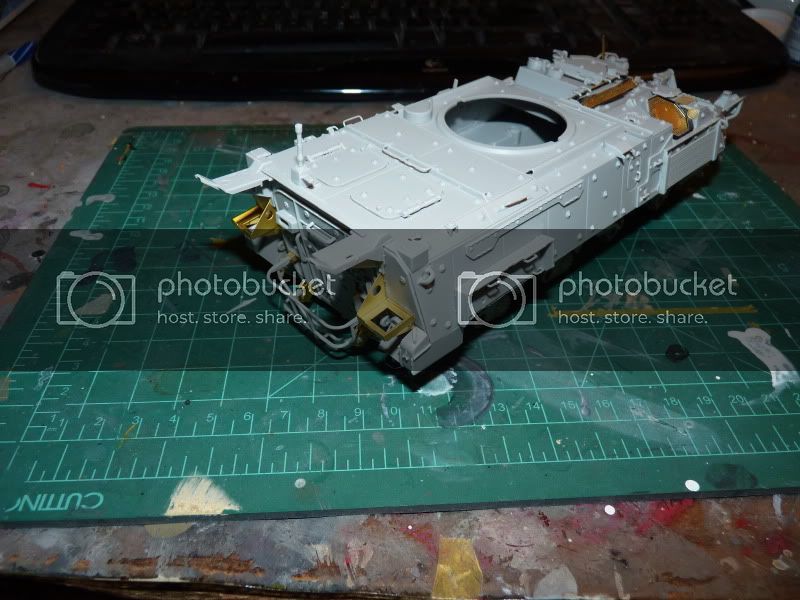 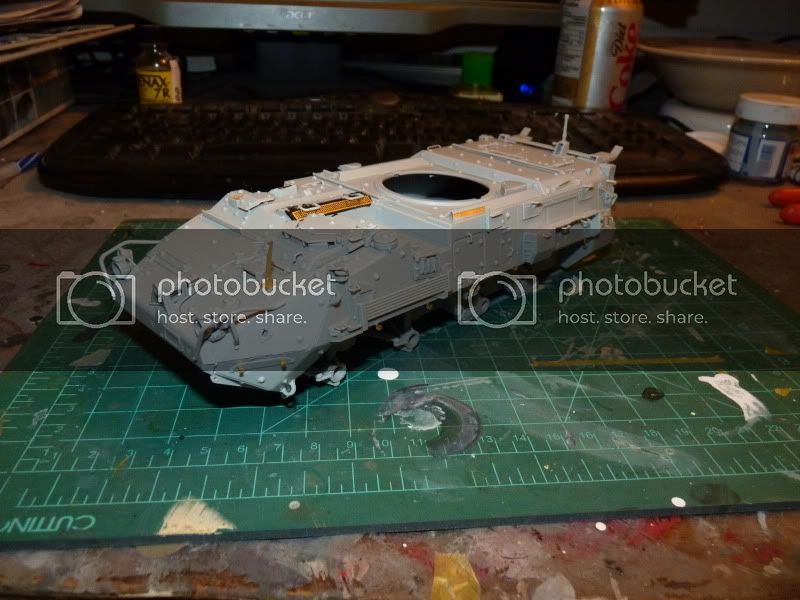 One of the last steps with the assembly of the upper hull was the placement of the support brackets for the aft cargo bin. After attaching those, I dry fitted the bottom part of the bin to line up the brackets and hold them while the glue set up. I could help but notice how much it looked like a spoiler on the back, who knew the crazy Canuck LAV mechanics were tuners! Hmmm, maybe that would explain the camo green pickup truck I saw at the Canadian Tire in Oromocto last fall. 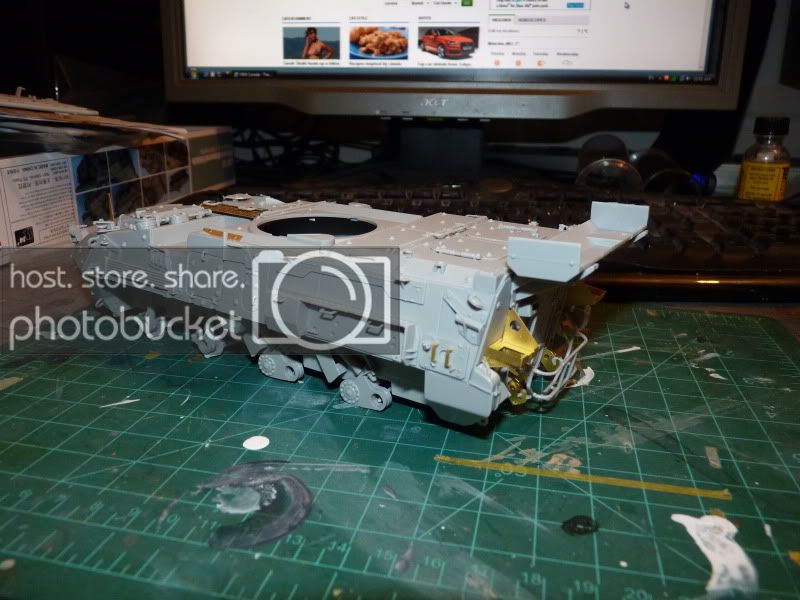 The stowage bin came next, that was a pretty simple box assembly, more PE to bend and attach though, plus some strap loops to attach on the basket frames, I thought I had them secure, but 1 went missing after I glued it it on. Ill see if I can hide that with some strategic stowage placement. 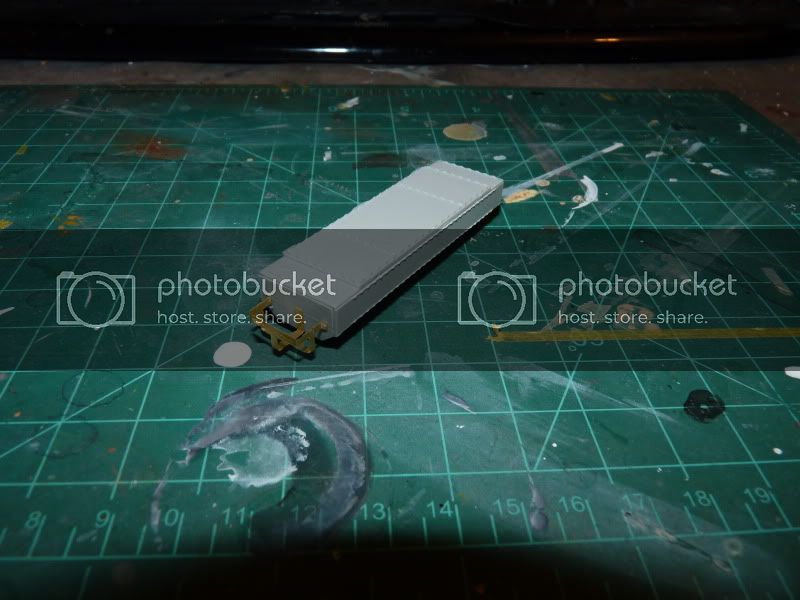 Not done the turret yet, still have the forward vision blocks and a few other bits to place, Every faceted side of the turret with the exception of the top has a separate part for the bolt on armor plating, I really hope I have them aligned right. The sides and rear of the turret will be detailed with one piece resin stowage and baskets from the Black Dog set. You can see the turned brass antenna mount from RB models. 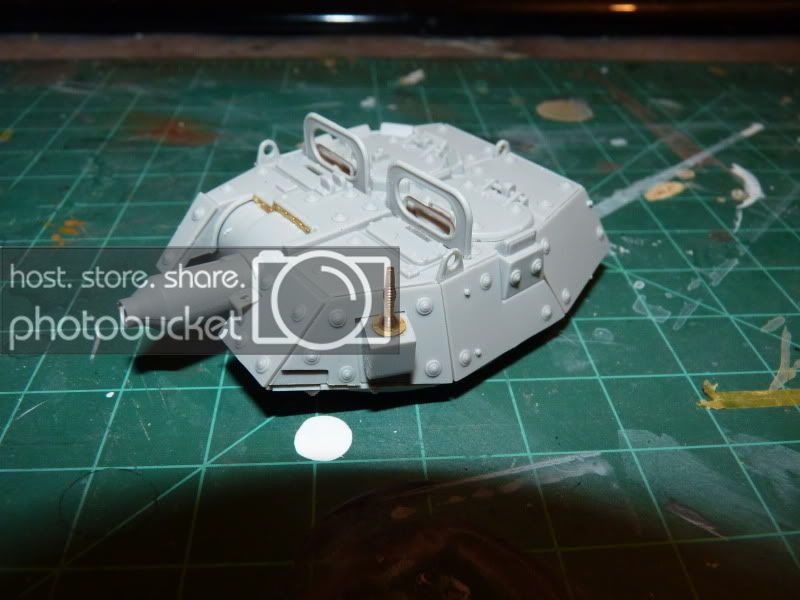 And here is where I am at right now. I purposely left some parts off to ease painting, including the winch cover and side view mirrors. I want to use the void where the whinch would go to stow some boxes, and the mirrors would just get knocked off anyways. the pioneering tools were left off also til after the main painting. 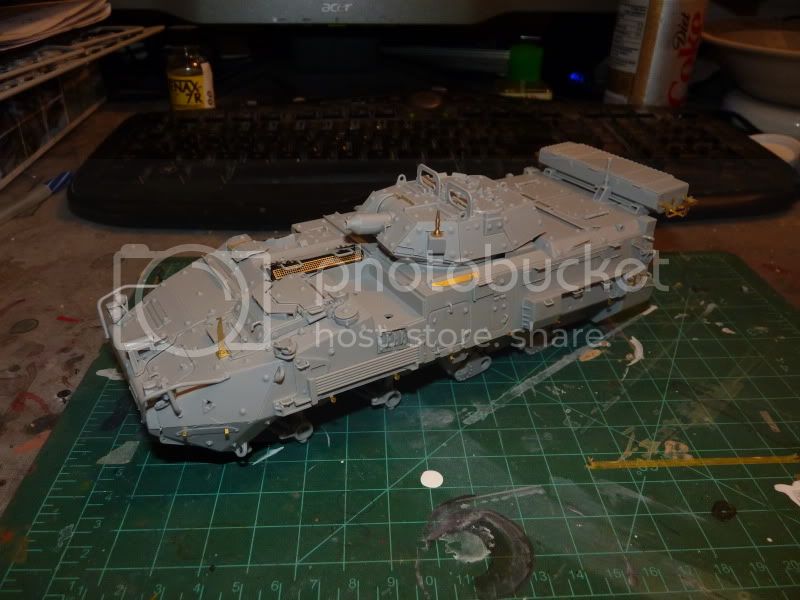 The size of this thing surprised me, I thought it would be about the size of the LAV-AT I built last year, but it is much bigger, closer to the size of a Panther tank. Which is about the same length as a modern Abrams or Leopard tank.

LAVIII is the newer bigger brother to the LAV 25
S 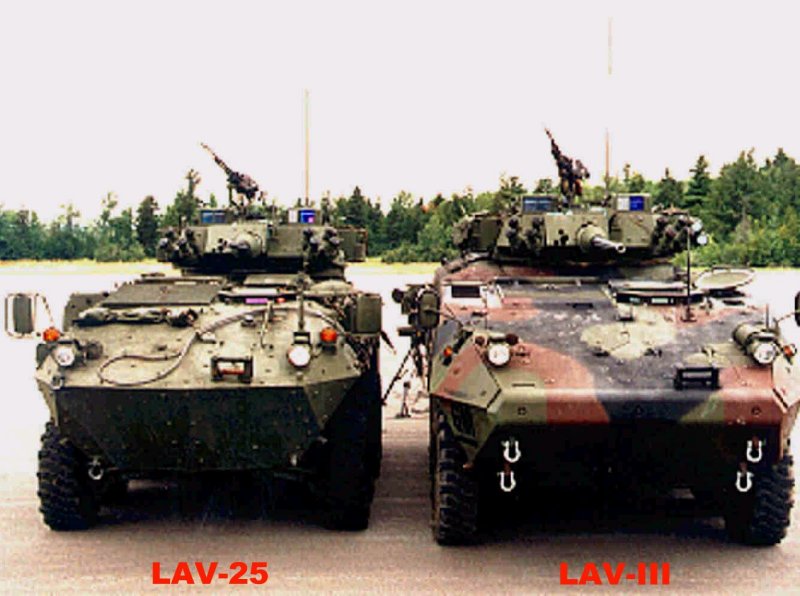