I recently picked up the new R2-D2/BB-8 combo kit. The Artoo is just a repackaging of the released in the spring of last year, which is nice to have multiples of, but obviously the main draw is BB-8! As people who have seen The Force Awakens know, BB-8 is the new ridiculously adorable droid that pals around with Poe Dameron (and later Rey) and like Artoo before him, is key to the plot of the movie.

I went back and forth on whether or not I wanted to paint this kit. I was leaning towards "not" because I wanted this build to be the thing to break the modeling funk that I've been in the entire month of December. After thinking about for the better part of a day, I decided that I would paint the entire kit. Color matching his orange will probably be tricky as I don't have the widest selection of orange paints on hand and I don't really feel like ordering the paints to match. Other than that, it will be an easy build because everything else is either white or silver. So in order to prep for painting, I removed all of the parts from the sprue tree and made a BB-8 forest on my hard Styrofoam blocks with the pieces organized by the part of the body that they belong too.

Like Artoo, BB-8 comes with all of the gadgets you see in the film: the 'disk drive,' the arc welder, and the blowtorch. I haven't decided if I will use any of these extras, but I'm leaning towards painting the blowtorch just because that scene in the which he uses it is pretty amusing!

After priming all of the parts with Alclad II grey primer, I let them dry for about an hour. Since it is a lacquer-based primer, the cure time is incredibly fast; the bottle says it's dry in 30 minutes, but I always like to get it a little extra time. However, after it dried I realized I hadn't decided what direction to take with the paintwork yet. Normally I would preshade everything and then apply the base coat, but I'm worried the preshade might throw off the "look" of the model. I'm also worried about how shallow some of the panel lines on the body sphere are so I'm trying to limit the amount of paint I apply to it.

Even though I'm not entirely sure how I want to go about painting the white and the orange, I knew for certain how I wanted to do the metallic parts. To me, the most obvious choice is Alclad II Aluminum (ALC 101), which is probably the most realistic finish possible for a model part. In the above picture, the hatch on the left is how it appears directly from the sprue while the one on the right has been sprayed with Alclad II Aluminum and it's a night and day difference (the bright lights of my painting desk help exaggerate it as well). It's also important to remember that Bandai's metallic-colored plastic is actually pretty good and would look decent enough straight from the box.

im looking forward to seing your work but i'm no fan of that ball droid... too cutsie as far as i'm concerned


Jimi said:
i'm no fan of that ball droid... too cutsie as far as i'm concerned
Click to expand...

That's part of what makes him so great!

I thought he was cool before I saw the movie and I was even more impressed afterward. How much emotion the puppeteers were able to get from from the puppet is amazing. Also, I have no qualms with cute characters in what is, for all intents and purposes, a kids movie! (Besides, my daughters absolutely love him!)

This looks like an interesting kit. Is there just one way to put it together or are some of the parts interchangeable in location? Just wondering with all the parts separated out for painting how you are keeping track of which one is what number.


Hagoth said:
This looks like an interesting kit. Is there just one way to put it together or are some of the parts interchangeable in location? Just wondering with all the parts separated out for painting how you are keeping track of which one is what number.
Click to expand...

The "body" ball is built around a cube-like structure. The metallic parts lock into the white parts which in turn fit into the orange parts, all of which are unique. Each of the round orange parts only fit into one location on the interior cube and then the curved shell parts fill in the voids, with each only fitting in one place.

The interior cube isn't in any of my pictures because it doesn't get painted. I put it back in the box so I wouldn't misplace it!

I'm impressed with the thought that was put into this kit. Very nice. Looking forward to your progress.

Jimi said:
i'm no fan of that ball droid... too cutsie as far as i'm concerned
Click to expand...

That's part of what makes him so great!

I thought he was cool before I saw the movie and I was even more impressed afterward. How much emotion the puppeteers were able to get from from the puppet is amazing. Also, I have no qualms with cute characters in what is, for all intents and purposes, a kids movie! (Besides, my daughters absolutely love him!)
Click to expand...

One of my daughters loved him too. Her name is Bibi and she is eight years old....

So he is her new mascot.

Thanks for showing, I now have this on order. I will be watching this.

After a little trial and error, I found a paint mix that I think looks pretty good. It's a little darker than the kit plastic, but after looking over some reference photos of the puppet used in the movie I think it works really well. It's made with Vallejo Model Air Orange (71083), VMA White (71001) and VMA Yellow mixed 4:4:1 with just a touch of VMA Hull Red (71039) added to it.

It's hard to tell from this picture, but all of the white parts have been given a light preshade with some excessively thinned Tamiya German Grey (XF-63). I was on the fence on whether or not to do this, but I decided to should help give the model a little more depth and serve a nice starting point for the weathering since it seems to be predominately located on the edges of his various panels. A little more visible in the picture are the metallic pieces, which look absolutely incredible with the Alclad II Aluminum paint on them. I couldn't be more pleased with how they turned out!

I mixed up a warm off-white to serve as the base color for BB-8. I mixed Tamiya Flat White (XF-2) and Buff (XF-57) at a 12:1 ratio and added a tiny brush-load of Neutral Grey (XF-53) to the color cup of my airbrush. All of the white pieces were given a couple of light coats and I made sure to allow the preshade to show through ever so slightly. In the first picture, you can also see his two "eyes" (or photoreceptors as they are called). The kit comes with decals to cover the outside of the large "eye," but it's nearly black, which is not correct to the filming puppet. I masked off the lenses and sprayed the surrounding area with Tamiya German Grey (XF-63). I'll give them a slight drybrush with Tamiya Gunmetal (X-10) to give them a worn look before I put them on the model.

I gave everything except for the metallic parts a coat of Future in preparation for an oil gunk wash. I assembled the head, leaving off the metallic parts because they don't need to be coated with Future (it detracts from the finish). It fit pretty nice and looks good, but there is a seam on his right side that doesn't match a panel line like the seam on his left. I don't really want to fill it now that the parts are painted, but it's going to bother me if I don't so I'll probably end up doing it. It's a pretty small seam and it shouldn't be too hard to make it look nice.

So far that kit has been quite a fun build and it has helped get the modeling juices flowing again!

Just got mine in the mail today. You seem to be off to a nice start!

My first model kit of 2016 is done! It was a nice way to jump-start the modeling juices after I spend most of December horribly burnt out. The only weathering I did was to give him a gunk wash of 502 Abteilung Starship Filth; this was done on top a satin coat of Future. I opted to keep that finish because it is accurate to the filming puppet. I might add some pigments here and there, but I'm going to leave the weathering as is for now.

Thumbs up indeed! That looks awesome! 8)

What allows his head to move and stay in place?

What allows his head to move and stay in place?
Click to expand... 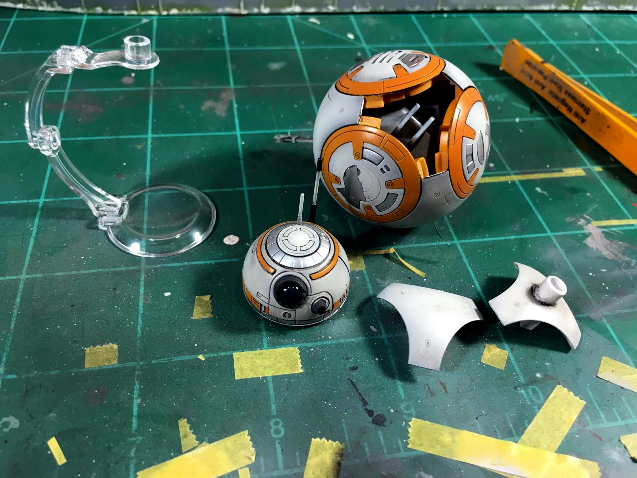 Ahhh clever. It looks like it also allows rotation side to side for the head. So from the pictures you used the armature in at least the second one? I can't see any clearance indication that it is there. Nice!

Hagoth said:
Ahhh clever. It looks like it also allows rotation side to side for the head. So from the pictures you used the armature in at least the second one? I can't see any clearance indication that it is there. Nice!
Click to expand...

Yeah, it's a pretty design and yes, you can rotate the head from side to side with the armature. Indeed, the first picture is BB-8 in just the bottom part of the stand with his head held in place with the shell piece with the peg and the "thumbs up" is using the entire stand.