All righty, then.
For the next project on the bench here, I'm going to do a buildup of the 1/72 scale A-wing fighter from Bandai 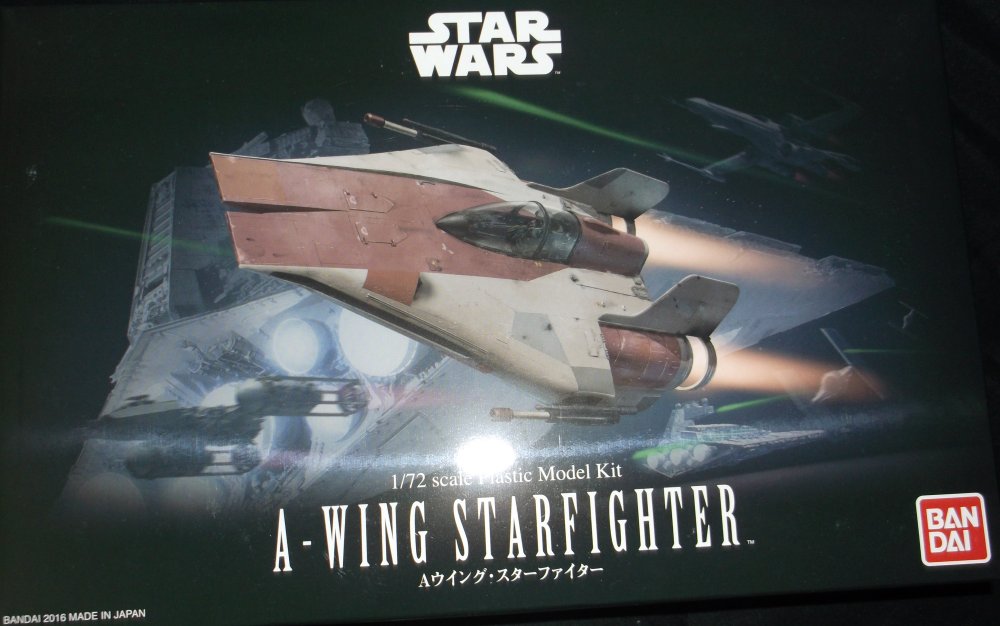 Like with the first Bandai X-wing I did, I'm going to build this one as part of "Jade" Squadron. In this case, "Jade 7."
As usual, we'll start with a look at the contents of the various sprues 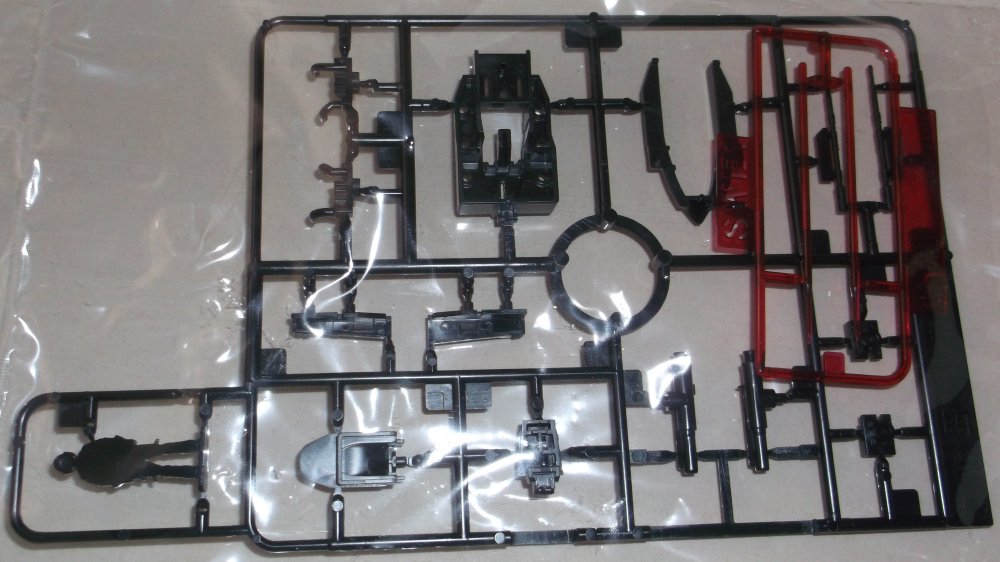 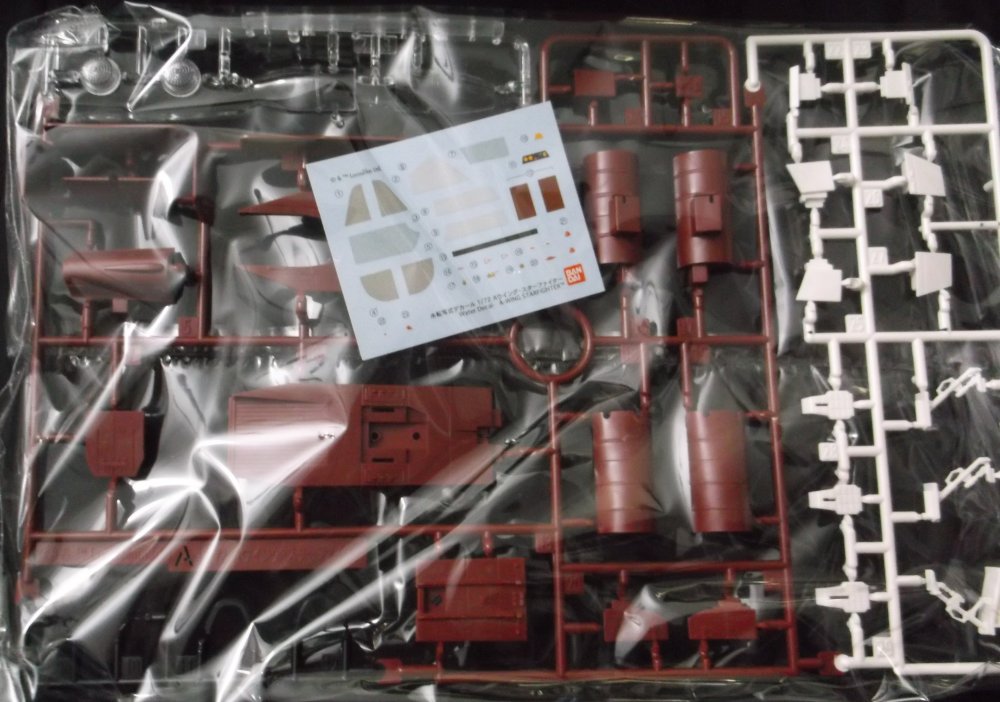 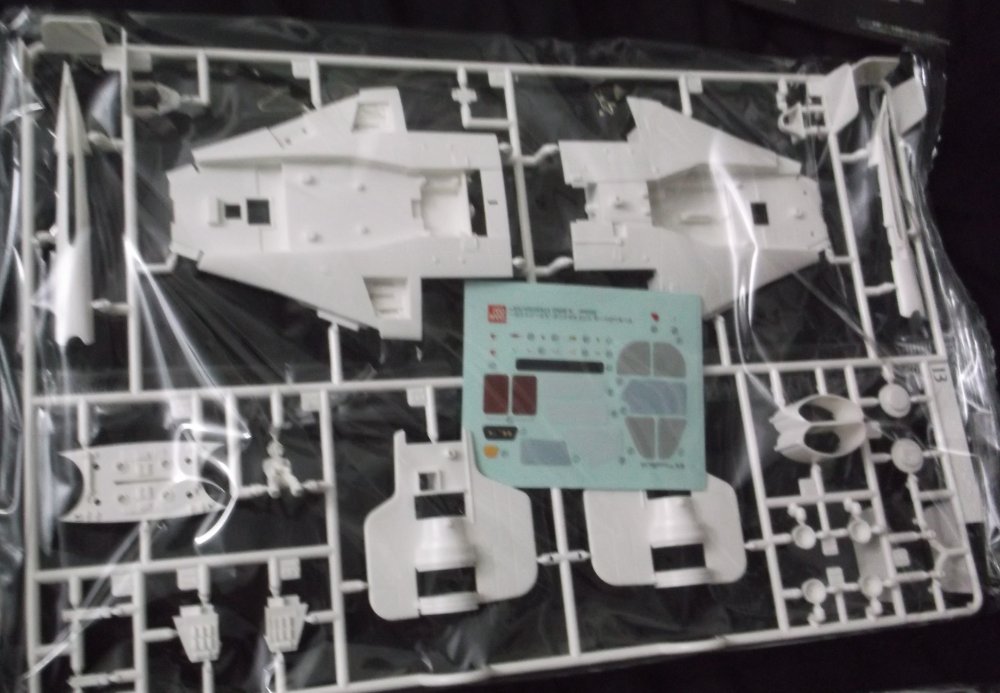 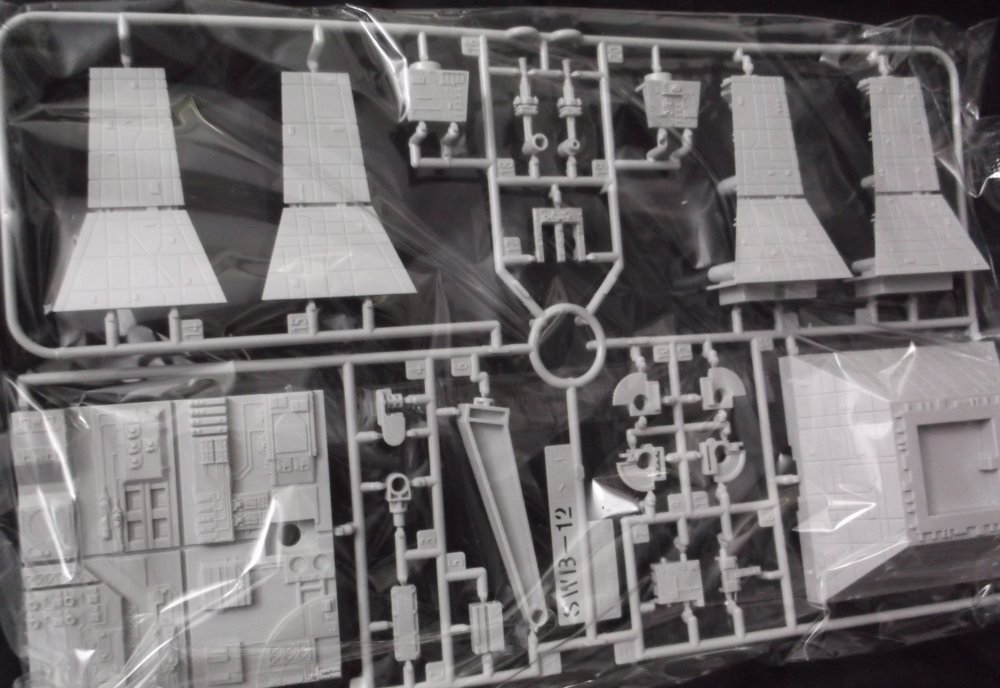 To get started with turning this into a Jade Squadron plane, I painted the red-brown parts with Colorspray Kelly Green

Before tackling the fighter itself, I built up the "turret' that comes as part of the base 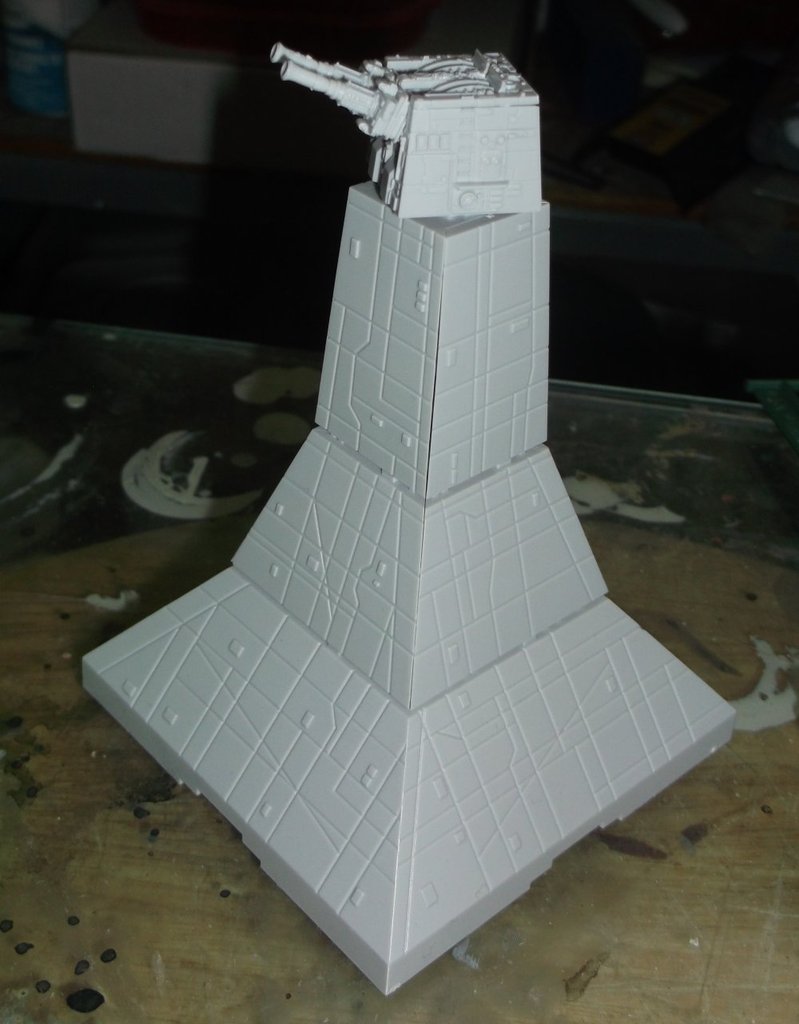 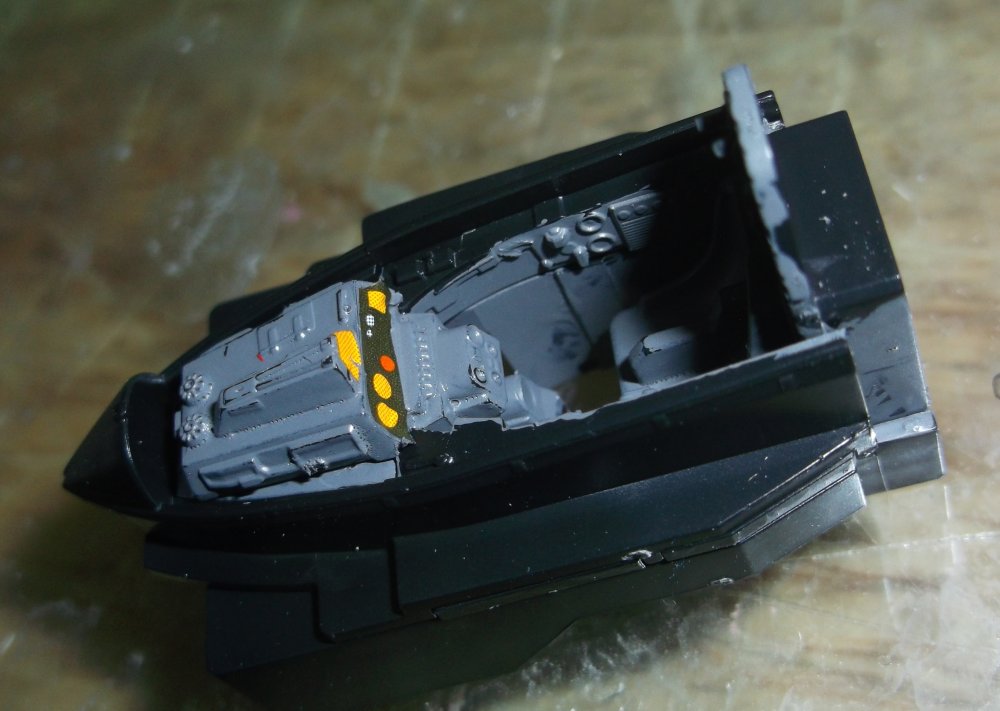 Step one, the main hull, was completed in fairly straight order.
I really like how the green turned out 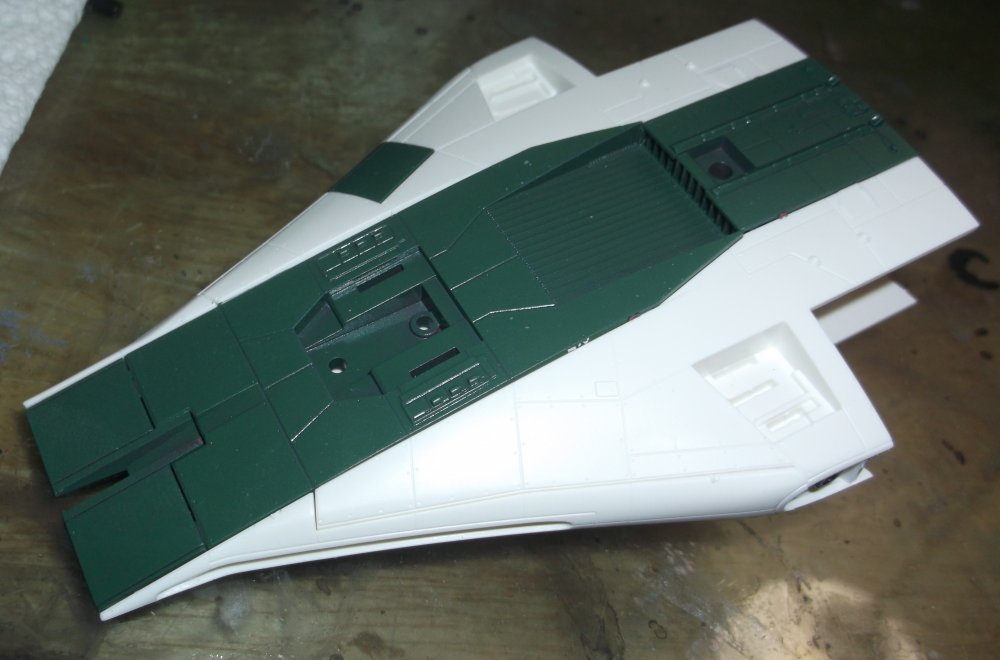 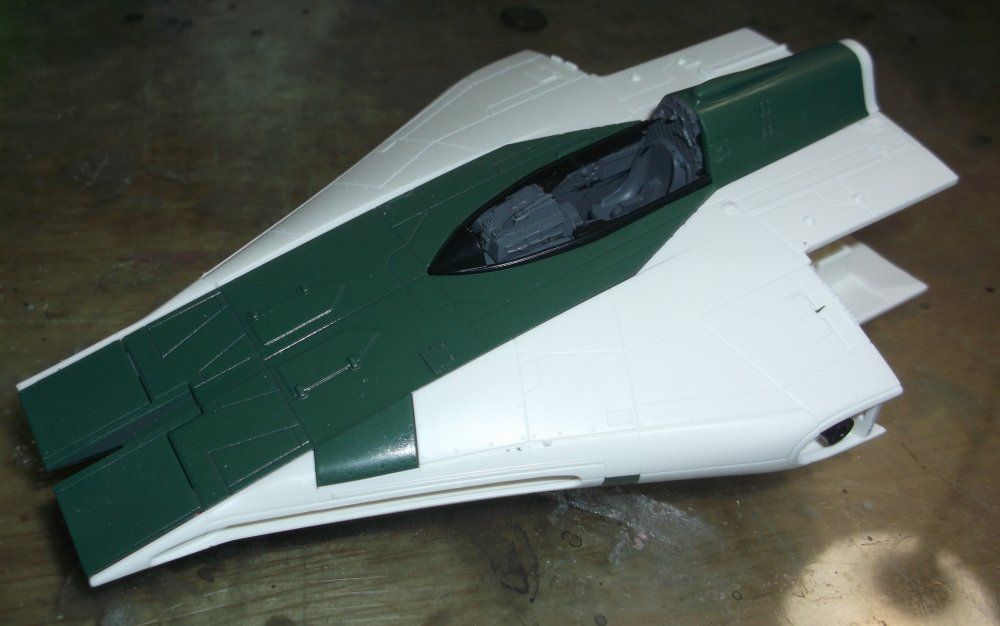 Engines were assembled fairly quickly.
I put a coat of Testors "Hickory" wash in the clear pieces to simulate the engine glow 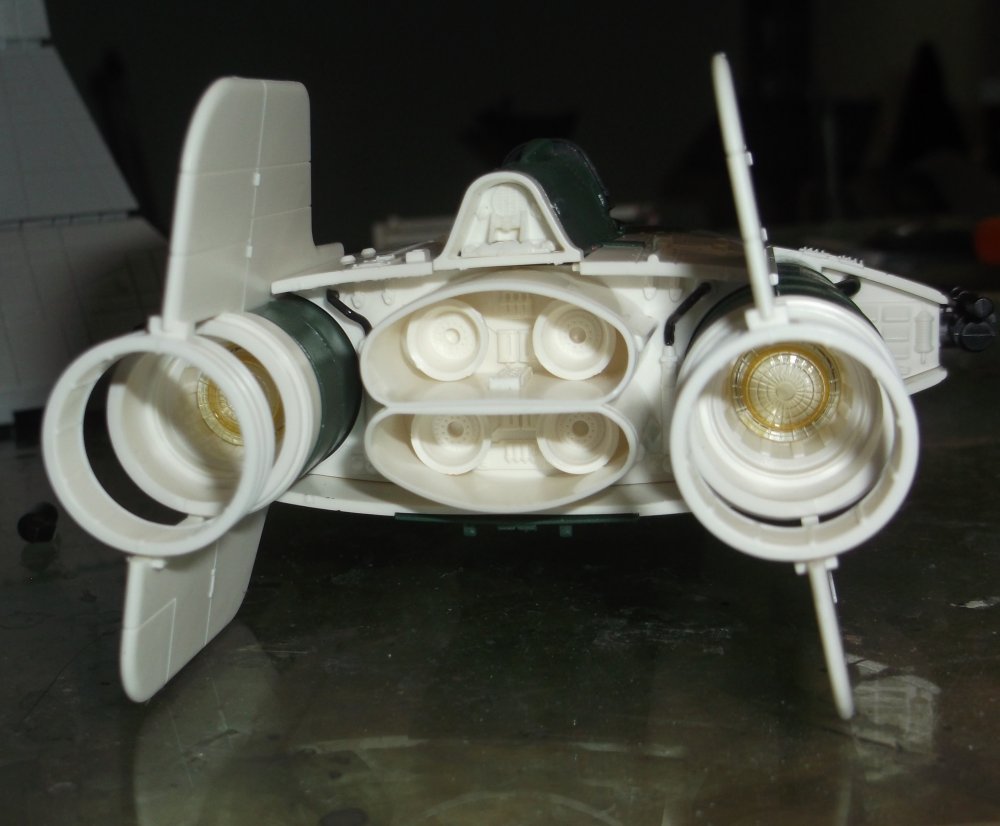 The turret was finished of with a black wash and the excess wiped off with cotton swabs and paper towels.
The A-wing itself got a similar treatment, followed by me picking out a couple of plates with drybrushing black around to simulate scorching.
The pilot was given a greenish blue flight suit with white accenting before being given a blue wash
On either side of the cockpit, I took a small Sharpie, and wrote "Jade 7" in the Star Wars 'Aurabesh" font.
I also put an aurabesh "7" on either rudder 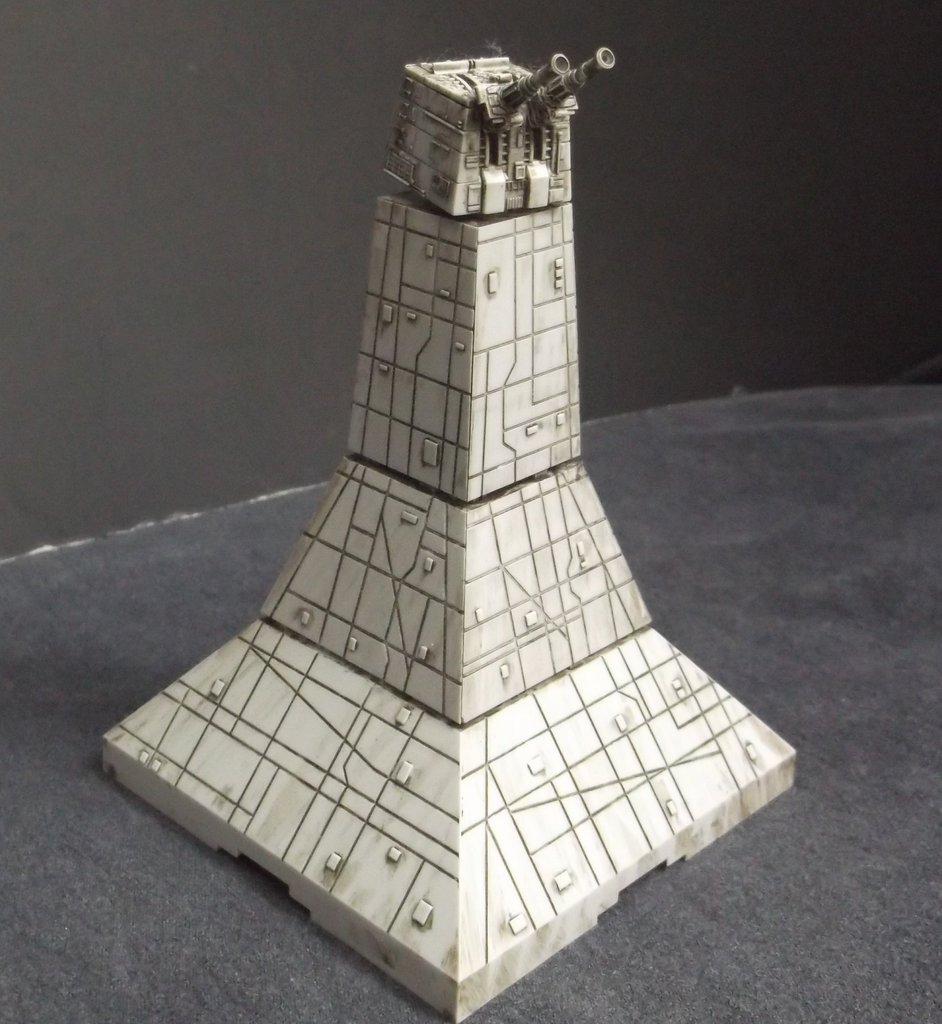 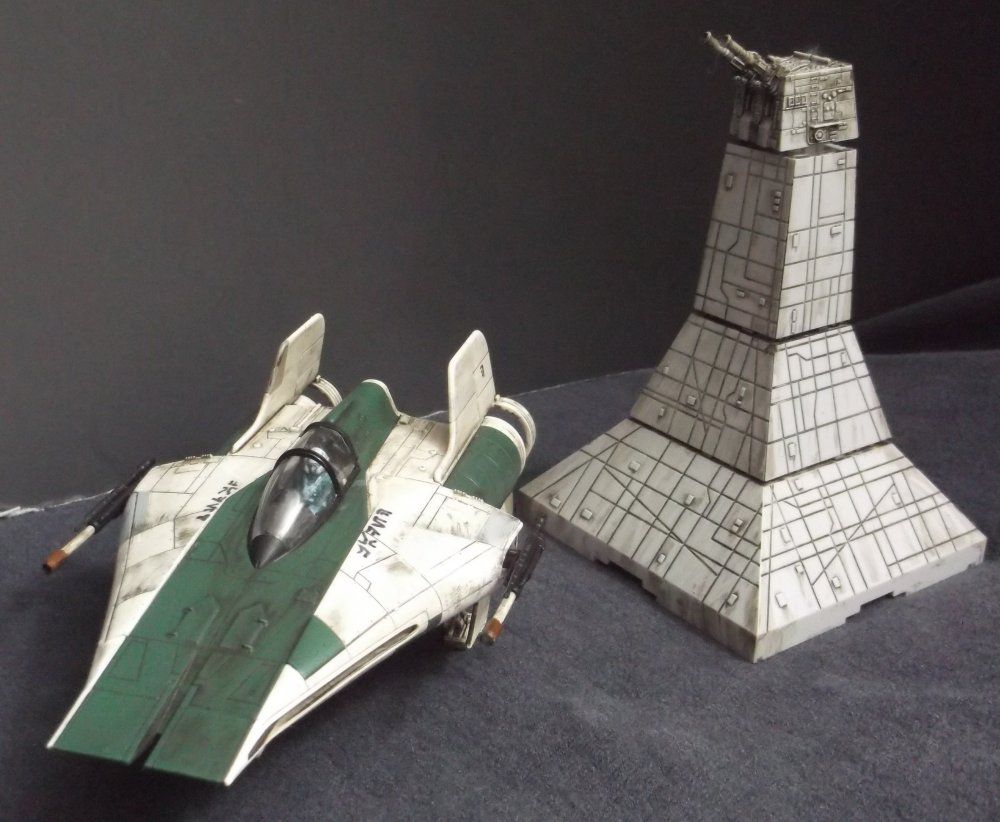 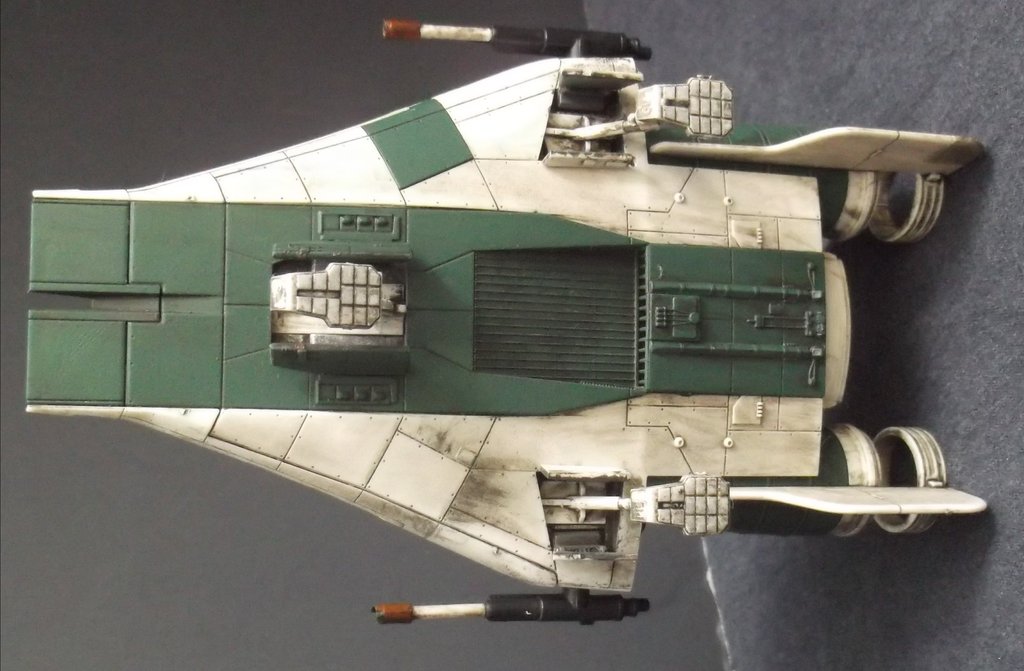 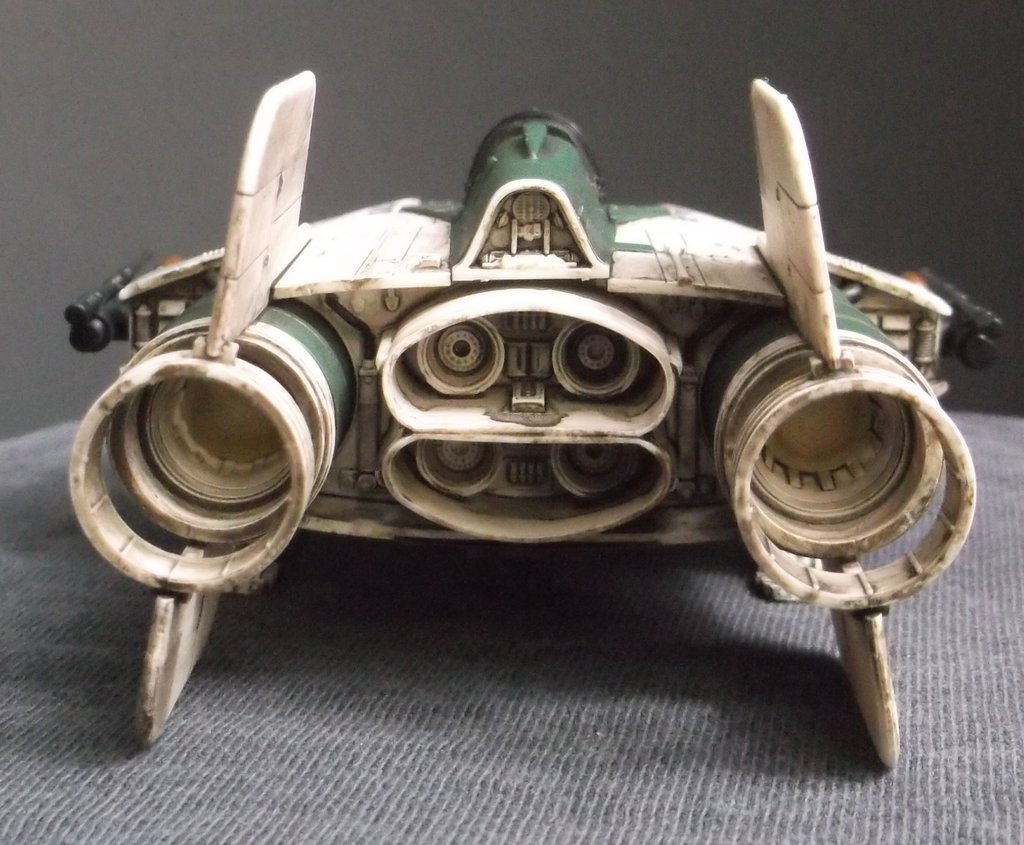 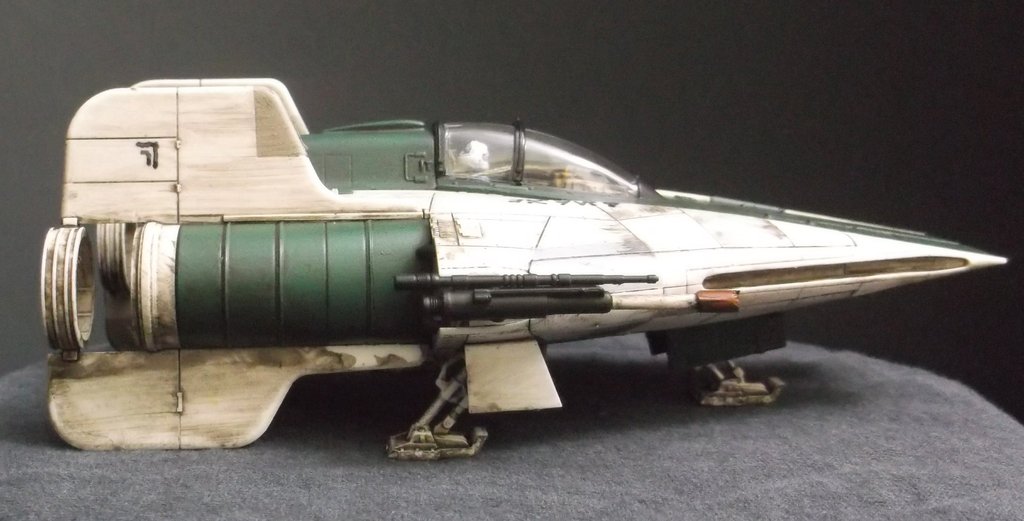 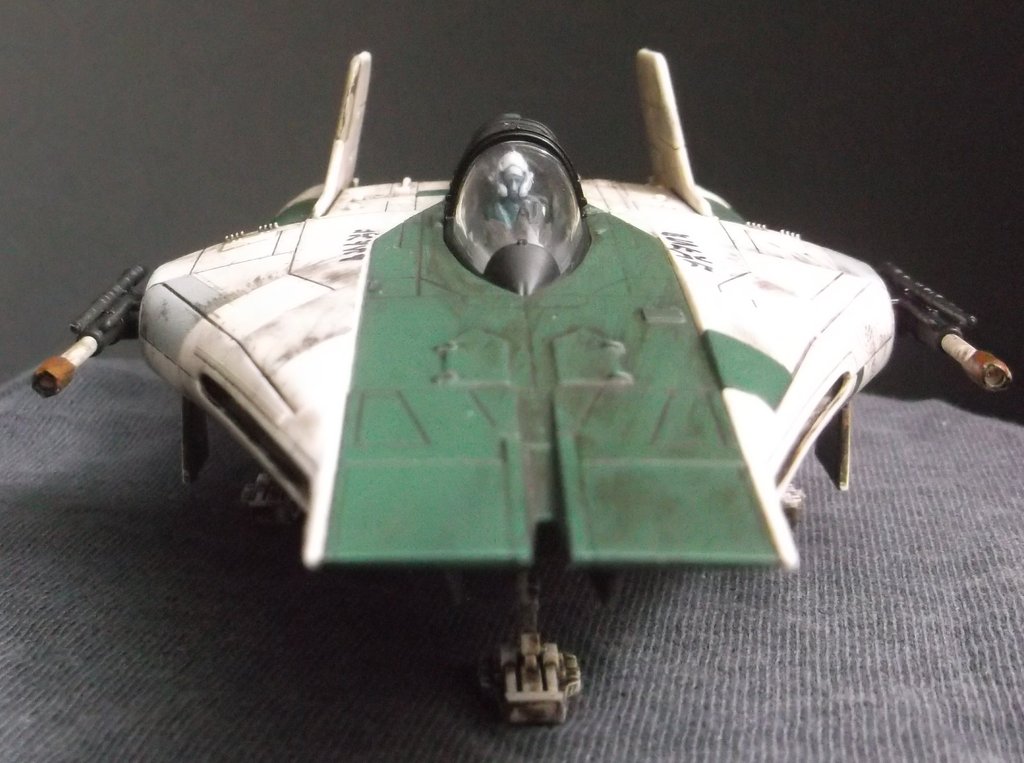 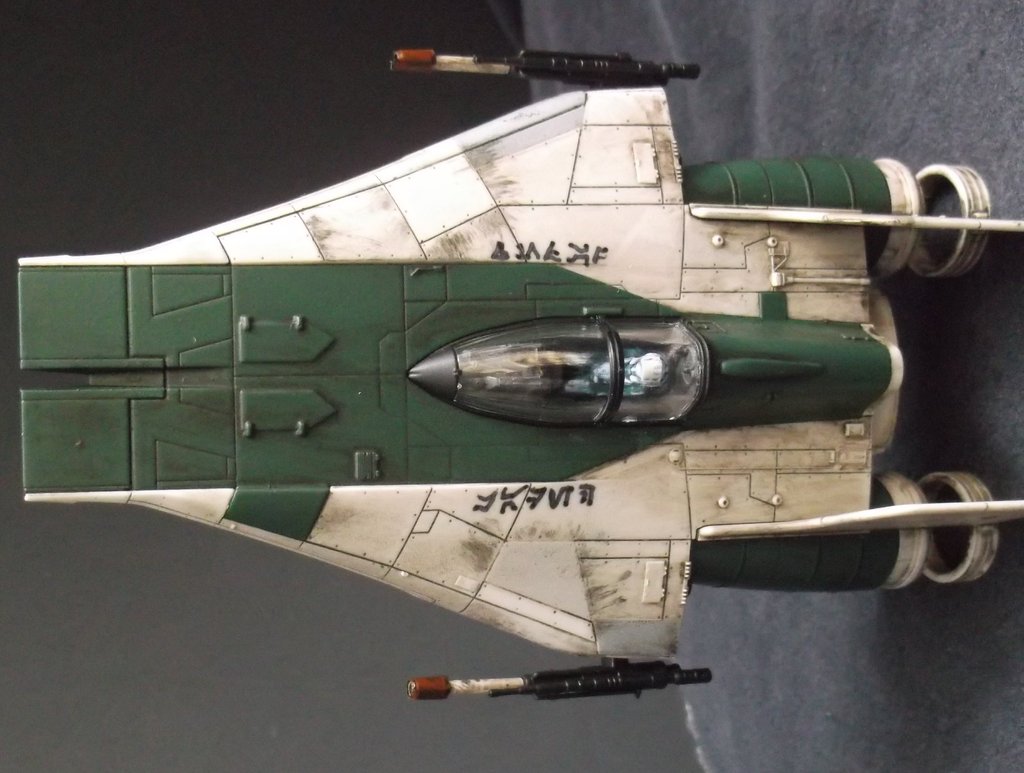 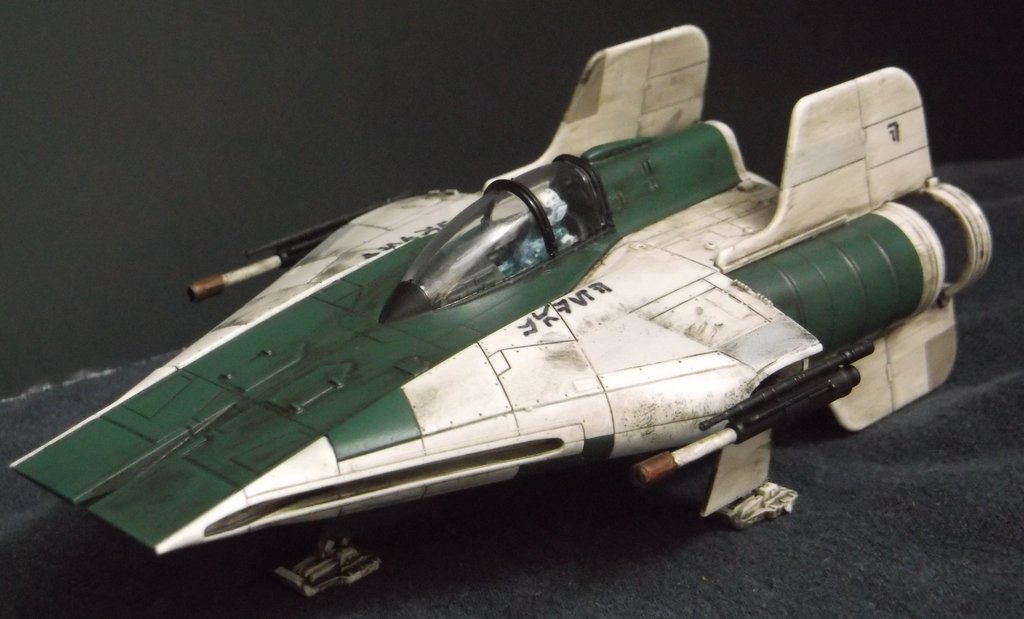 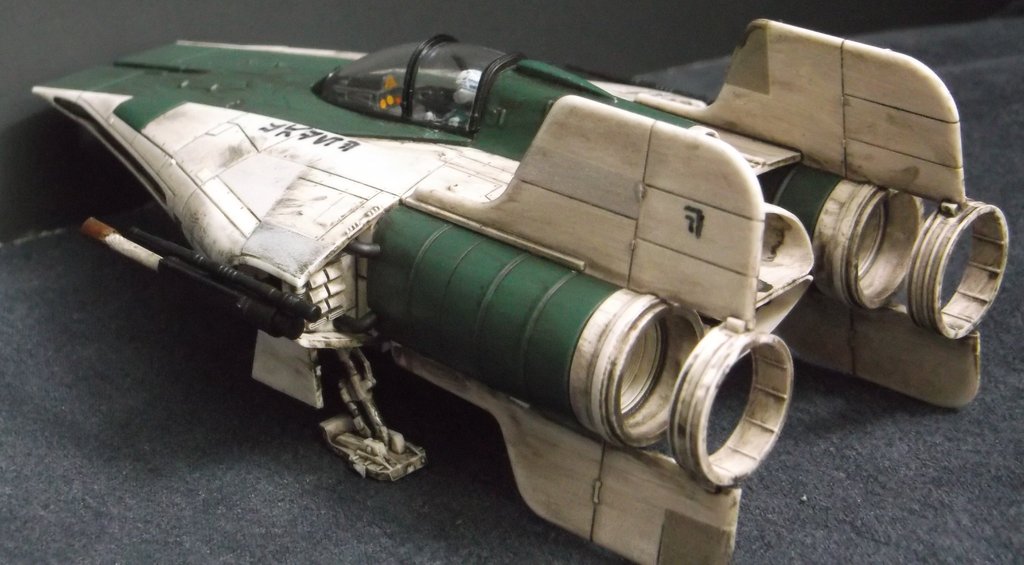 Before I watched the vid , I thought that tower was way bigger

That's one fancy-impressive feat of slide molding they have there for the engines -- I'd like to see how that mold works .

I was wondering about the characters and their translation -- glad you covered that . It looks really sharp !

Looks Good I love it.

I like the green! This kit looks super fun

Cool! Can't wait to get my hands on one of these babies.
N

Man, you did a really nice job on this model! Excellent work!

Thanks for the comments/compliments, guys

NICE.....gotta admit...I've never been a fan of green on Star Wars ships....but this just looks so right!!

Looks good! I won't be getting this kit as I like the smaller size for this scale, but very nice work! I love the green.

Rear landing gear looks weird to me as I always assumed it landed on the rear wings. But, alas, that's a minor problem.

Thanks, sci-fi. It just came to me on the green.

Ramsayman, the landing gear looks a little odd to me, as well. But we never really did see much of these landed in the movie
J

Inspirational, man! I really mean it- I saved all these pics for duplicating your weathering technique!
I really dig how you made some panels look replaced without over doing it!

Thank you, Jason
Truth be told, I drew my inspiration from the box art as far as the weathering went

Wow! Really liking this one. The color scheme, the weathering, the replaced panels... Nice job!

Very cool job. The green is a nice "something different."

the paint job is really cool!

this is a nice build!