Here is a look inside the box, at Aoshima's (relatively) new kit of the USS Wasp (CV-7).

Let's start with the box. I bought the boxing that depicts the Wasp at the time of her loss, during the Guadalcanal campaign: 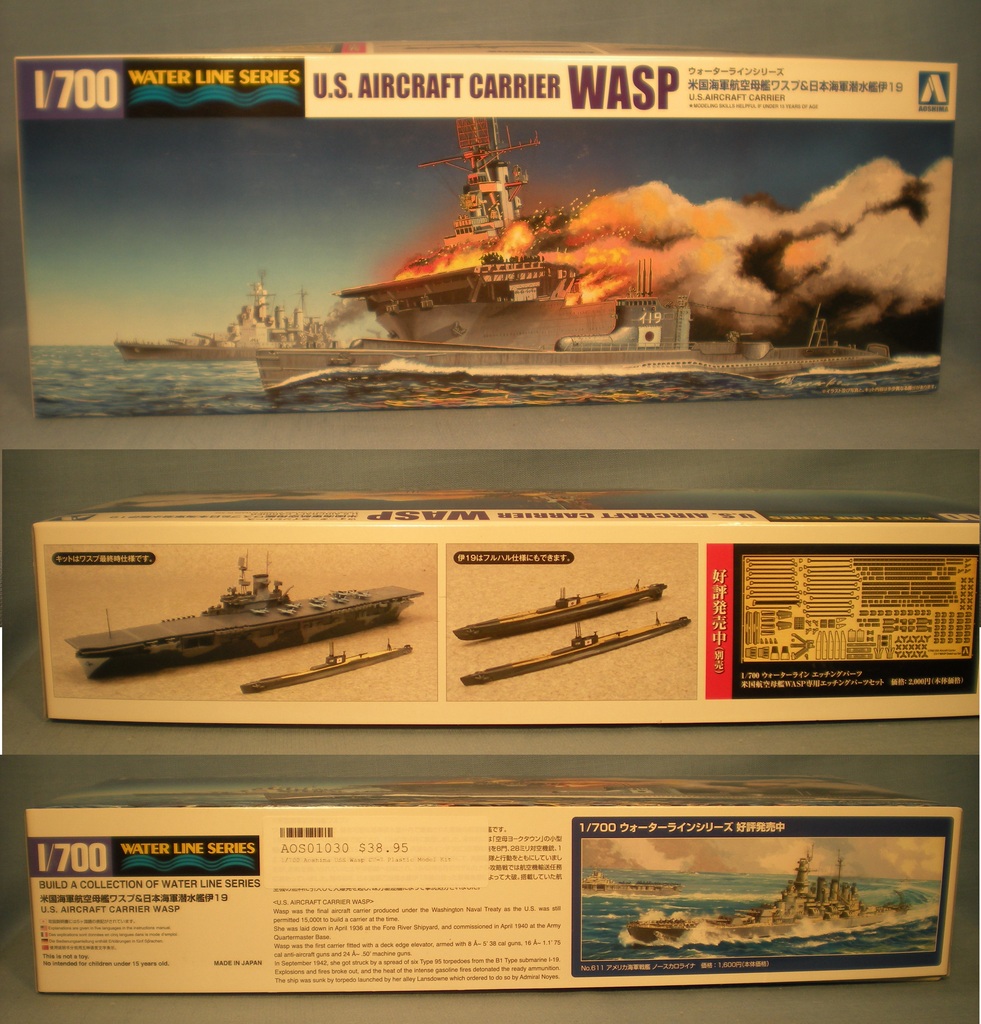 The box art shows her in flames after taking several torpedoes from the Japanese submarine I-19, which is gliding by her victim in this somewhat fanciful cover art. The side panels include images of the completed models--Wasp is a waterline kit, but the I-19 can be finished as a full-hull model. There is also what appears to be an ad for an aftermarket photo-etch detailing set, and another ad for what looks like a kit of the North Carolina. She was in the Wasp's escort at the time of the attack, and took a torpedo herself, in the bow.

The sprues are packaged, two or more to a sealed plastic bag. The first bag contains the pieces for the hull, port and starboard halves, and the flight deck, elevators, and various bits of the hull and island: 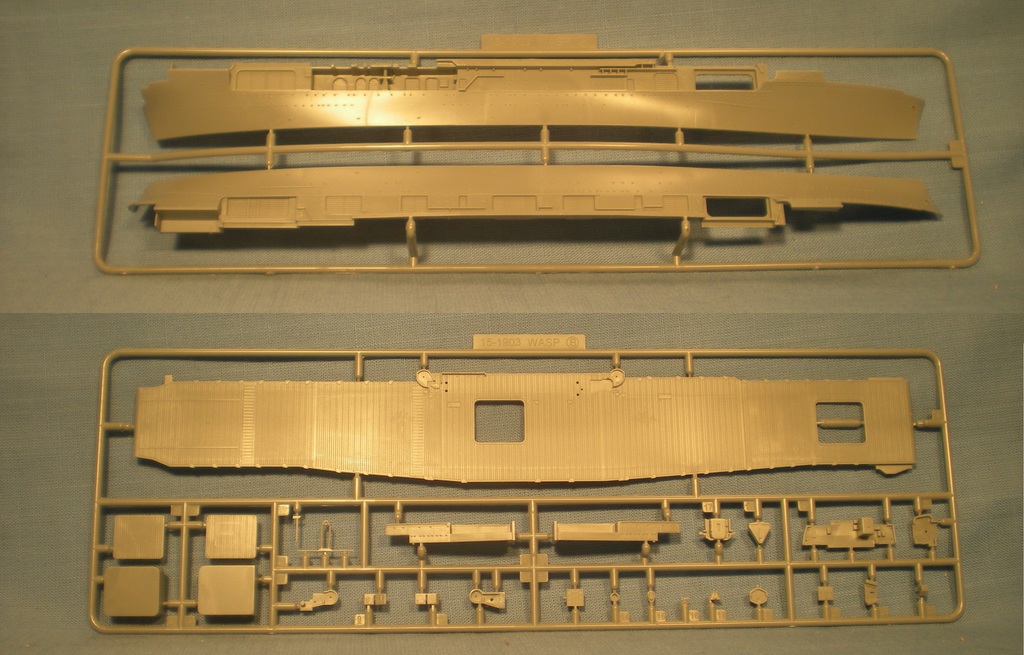 We have the option of finishing the flight deck with the elevators in the raised or lowered position.

This fret holds the waterline base, the fo'c'sle deck, a section of the hangar deck forward, under the forward elevator, and some more hull and island bits.

The piece for the hangar deck fits forward, where the rolling curtains are open, so they provide a little detail of the hangar. I am not sure, but I suspect that they represent a fire curtain or partition? I need to find a reference that shows this.

The next sprue holds the main pieces of the island, including her stack, and some gallery decks, which I believe represent the gun galleries along the flight deck:

The next bag contains two sprues with most of the anti-aircraft battery, the ship's boat complement, and more deck pieces.

And next, what I think is the weakest part of this kit, the airwing: 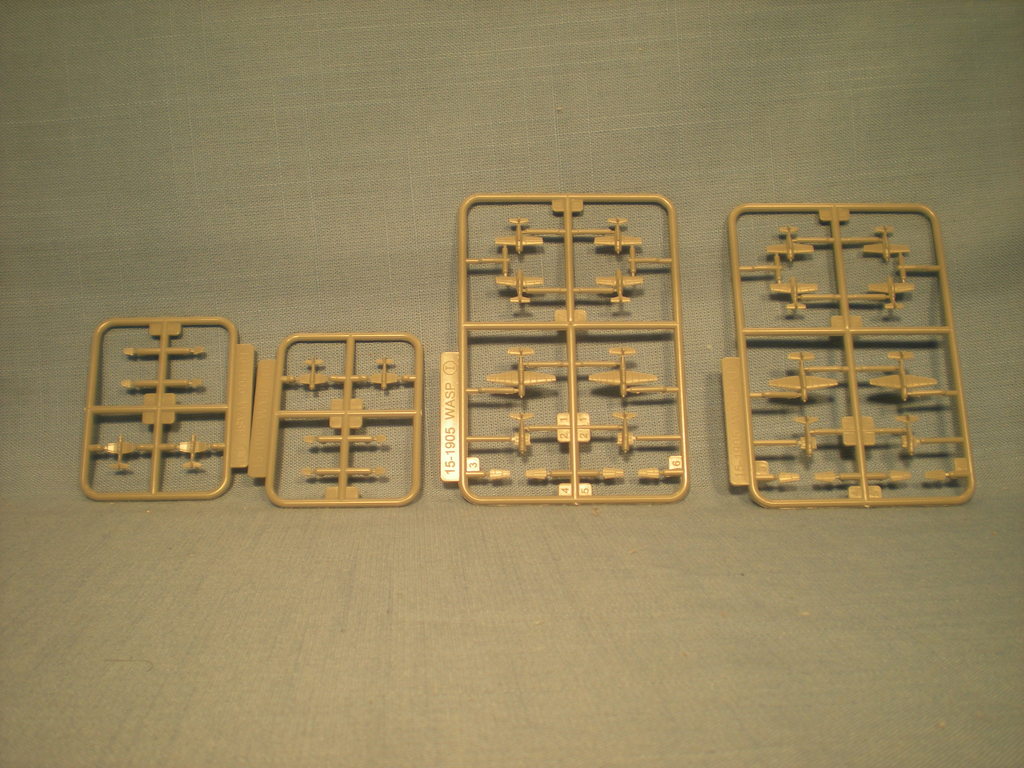 Eight F4Fs; four TBFs, two with wings folded; and four SBDs, with folded wings. The SBDs look only vaguely like SBDs, too. The vertical stabilizer is more like an inverted V than the shape of the Dauntless' vertical stabilizer. And the folding wings just can't be forgiven, not today. It's bad enough that the planes are molded in solid plastic, and not clear. If I used these at all, it would be in the hangar deck, if I were inclined to open the rolling curtains and show it. 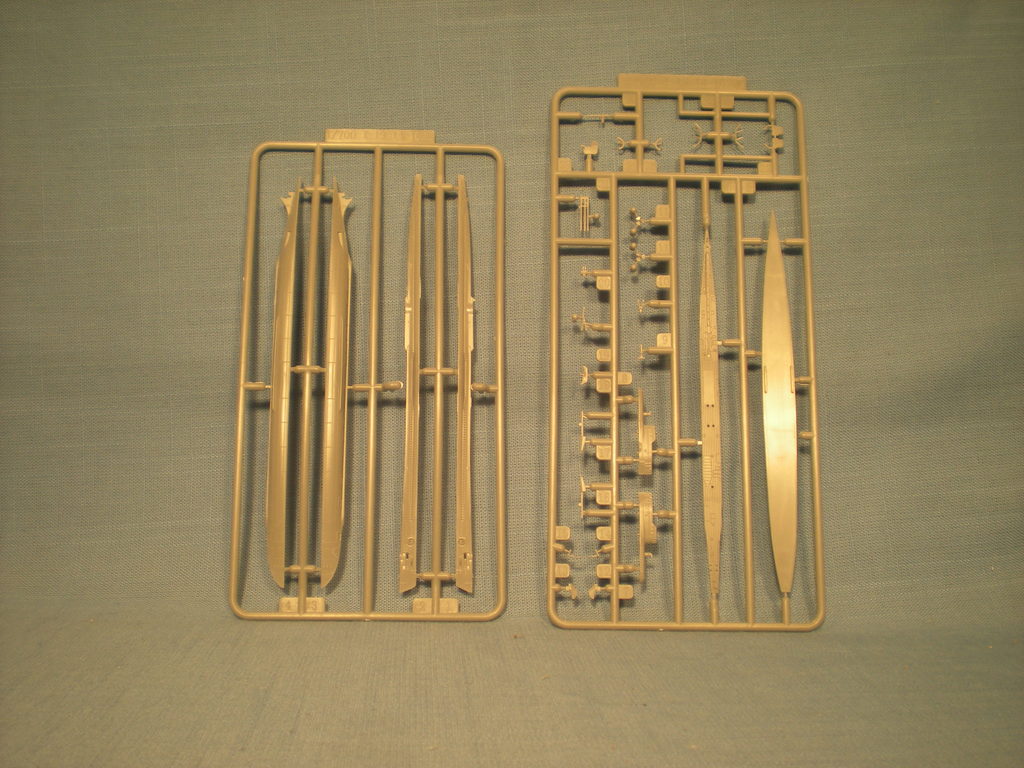 This is a nice little model, in its own right. It can be finished as a waterline or full hull model, and for those who do build it as a full-hull, there is a small stand included. I do wonder, though, if the sub weren't included, if the kit would have a correspondingly reduced retail price.

Here is the stand for the sub, and the decal sheet: 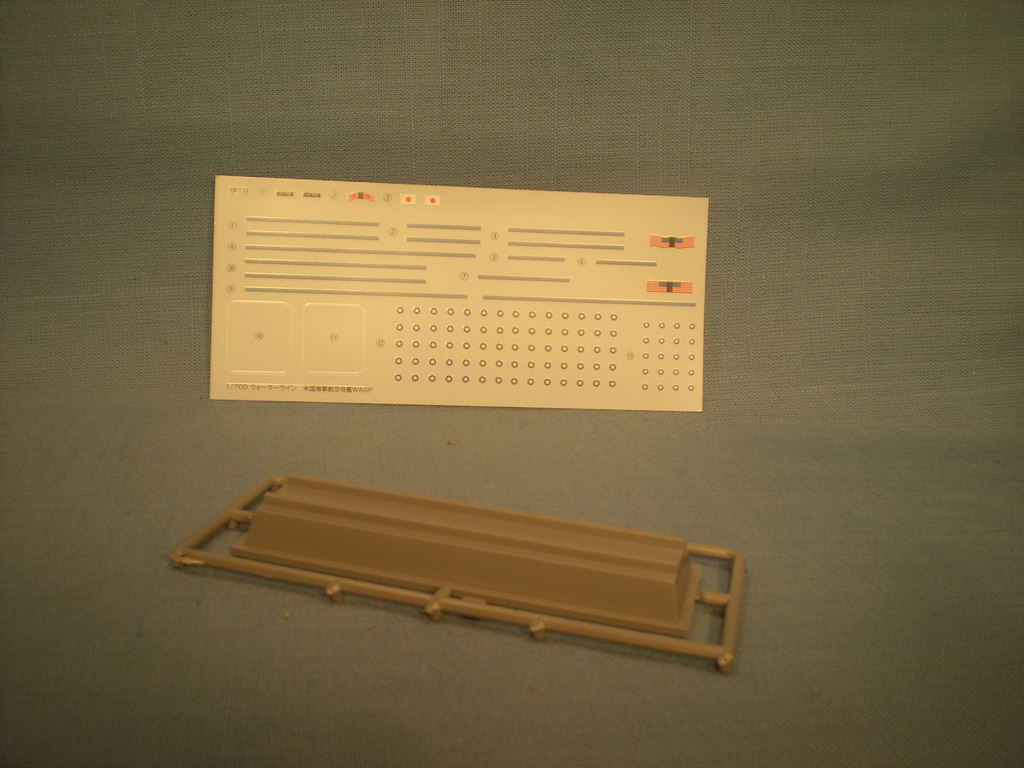 And here is a shot of the instructions: 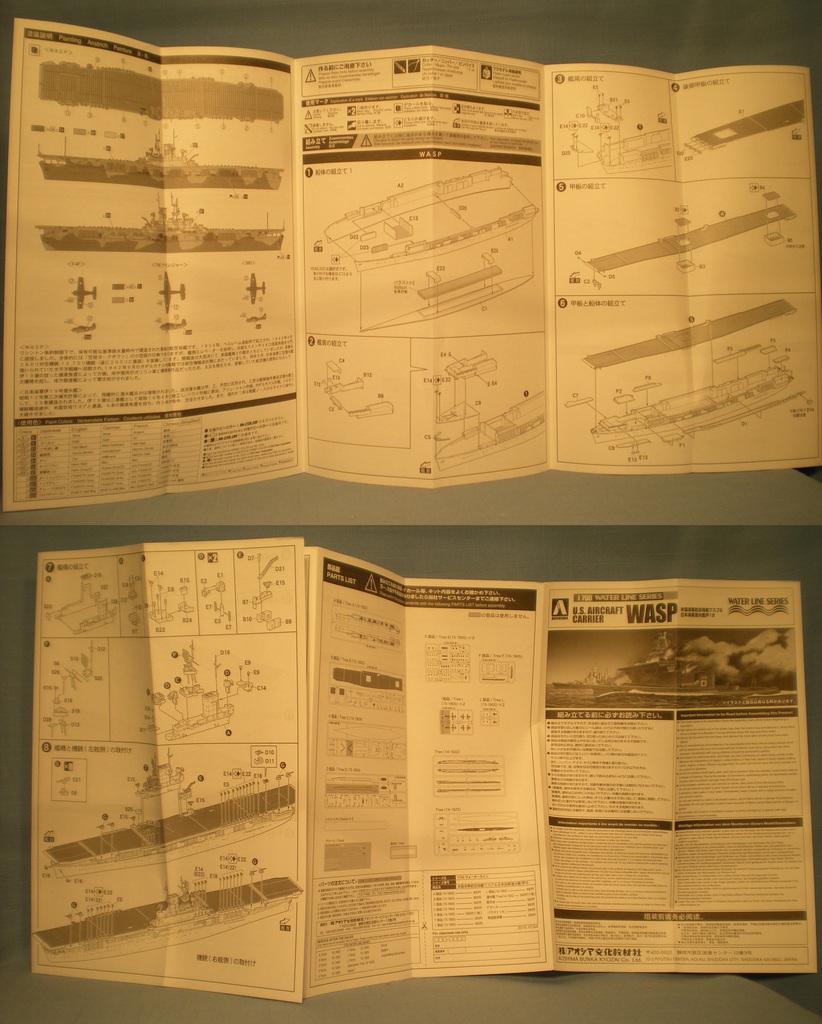 with painting guide and color callouts, apparently for Gunze-Sangyo/Mr Color paints. The table of colors is in Japanese, English, German and French, but the instruction notes are all in Japanese. However, the exploded drawings are pretty clear to follow. If you've built any of the Waterline series kits in the past, you should have no problems with this one.

Overall, the quality of the molding is good, with fair details, though the contemporary ship modeler will want to get some photoetch for the fine details, such as railings, the light AA battery, radar and radio antennas and aerials. The 20mm guns also appear to have no splinter shields.

Still, it's a decent kit, of a subject many of us have been clamoring for, for a long time. Compared to the other offering in 1/700, Corsair Armada's resin kit, this kit has two main advantages--it's available and it's about a third of the price of the CA kit. I'm looking forward to building it.

Also, Aoshima offers another boxing of this kit, depicting the Wasp ferrying Spitfires to Malta. That one includes a fret of Spitfires, naturally.

And maybe a kit of the Ranger isn't far behind...

Thanks for looking, and if you're so inclined, I recommend this kit.

I should add that the kit is backordered at HobbyLink Japan. I got mine from FreeTime Hobbies based in Blue Ridge, GA, with a turnaround time of four days. If you search the web, you'll find the kit for sale with other vendors, too

I got a bulletin about this kit yesterday, in a newsletter from FreeTime Hobbies:

"Aoshima USS Wasp (3rd version)
Aoshima is releasing another variant of their Wasp kit. I don't have much information on this yet, but, based on the second version (with spitfires) and the boxart of this one, it is likely the same kit with different planes."
You must log in or register to reply here.
Share:
Reddit Pinterest Tumblr WhatsApp Email Link