That doesn't sound to good. (The liquid green stuff) My local hobby shop carries it and occasionally they point me at the Citadel paints. So I have seen it before.

Well I did an inspection on the liquid greenstuff, after it's had time to cure its perhaps not to bad, and sands down easily. Will give it another chance to redeem itself.

Also, this will help with inspiration!


Cave_Dweller said:
Well I did an inspection on the liquid greenstuff, after it's had time to cure its perhaps not to bad, and sands down easily. Will give it another chance to redeem itself.

Also, this will help with inspiration!

well at least with the liquid green stuff there is no mixing unlike there normal one which is horrible to work with.
But looking good so far
A

Hey Cave _Dweller
Thanks for the info on the green stuffs ! I see it at my local hobby shop I just never pulled the trigger and bought any !

Progress! I've been slowly working up the interior. At first I was kind of irritated on this model how it requires these discreet phases that must be completed in precise order, but now it's kind of refreshing as I'm already getting to do weathering and decal work at such an early stage in this model.

Still, quite a long way to go on this bad boy, it really is a challenging model.

Here's some of the latest pics.

I masked off and painted the crew deck, and had some overspray issues. To be honest, I was being lazy (sloppy!) and got this as a result: 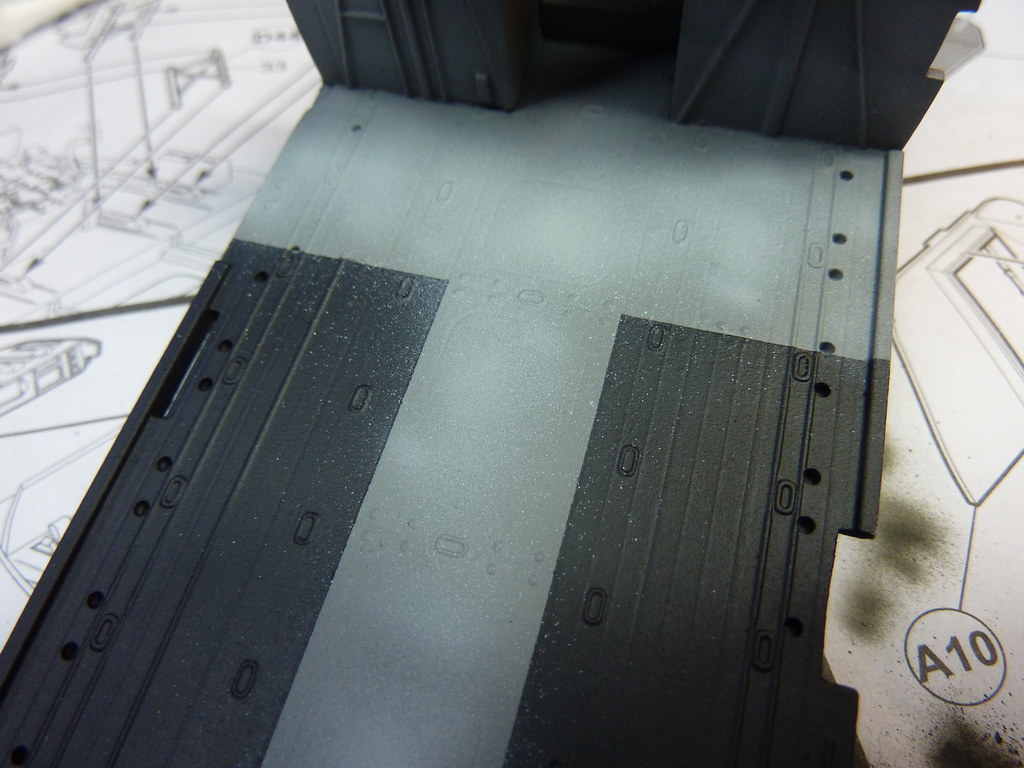 But the cockpit is turning out nice, although not as crazy detailed as you might expect given the insane level of complexity of this kit. I feel like there should be more buttons. I'm going for a 'landed' build, that is, with the crew not present and all the systems shut down. Painting all the MFDs would be crazy hard! 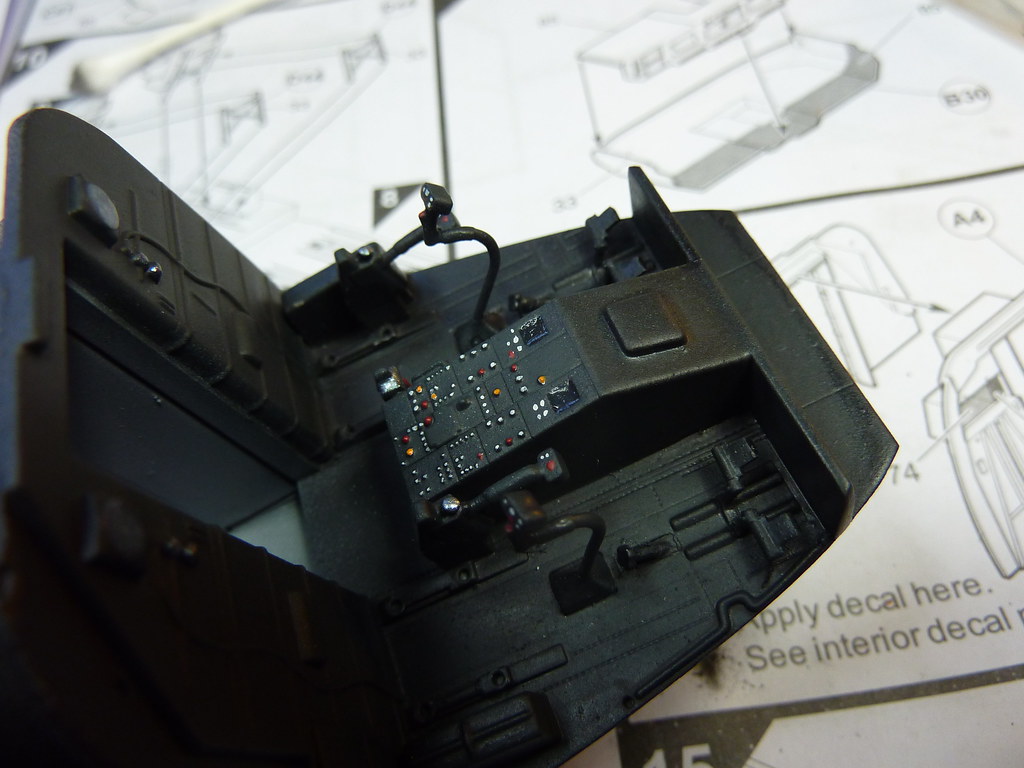 Here we are with the seats glued in and finished, although I'm feeling the green and yellow is a bit flat. 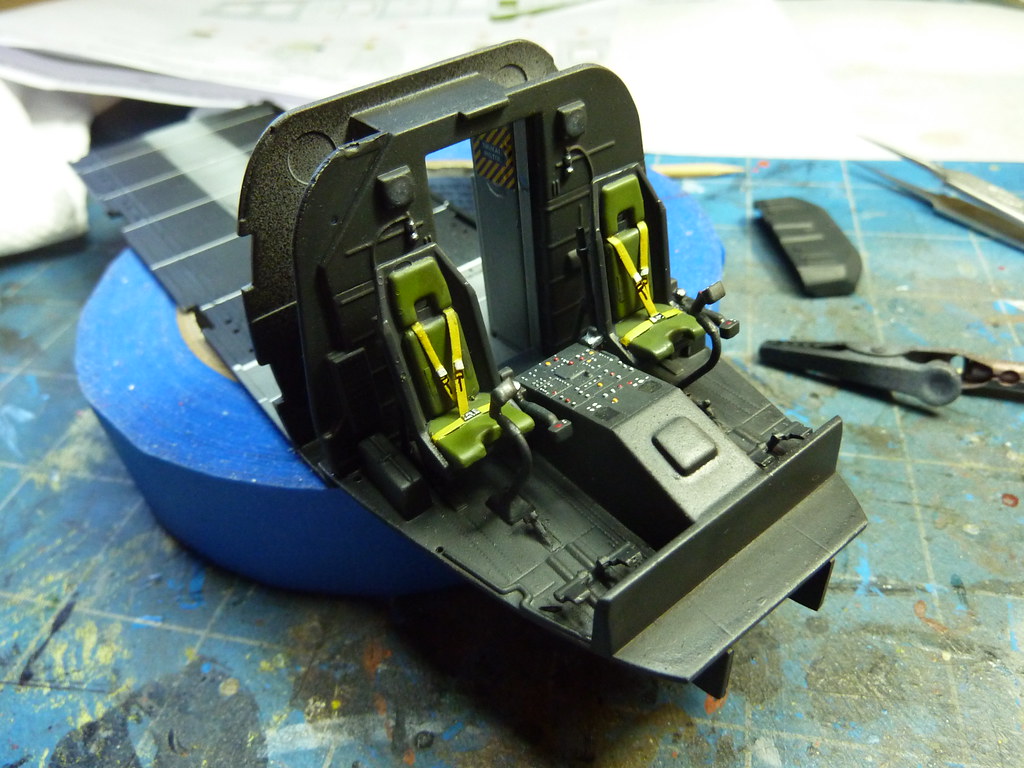 Some decals applied to the deck. I had some washing issues from copious amounts of water and decal setting solution, but I'll cover that up later, and quite frankly no one will ever see it when it's done! 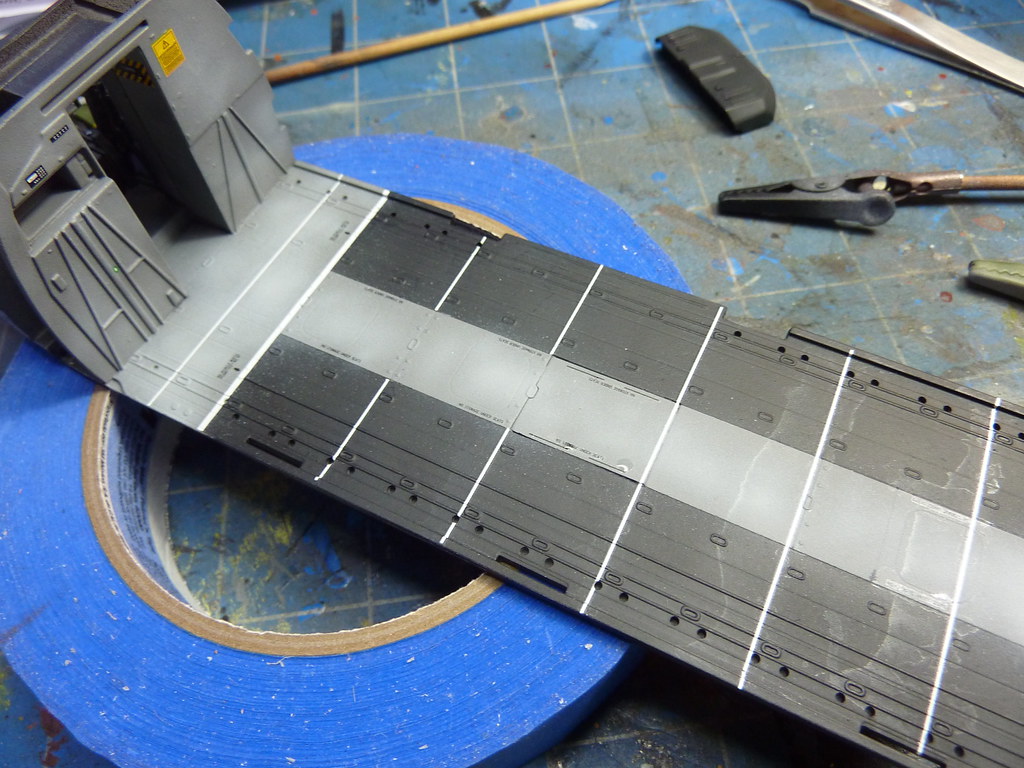 More decals, this is an amazing kit in terms of outstanding decal quality alone...just wow. Airfix makes some awesome stuff. 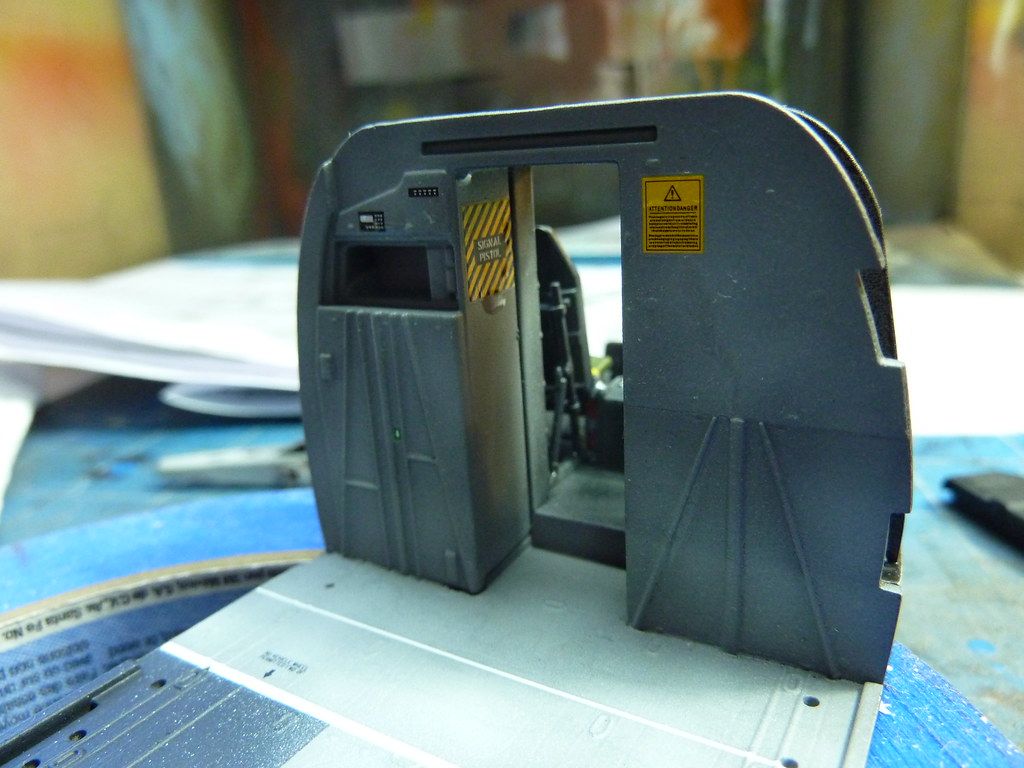 Part of the hull (? is that the right term for an aircraft?) test fitted and some black oil wash applied, to grime things up a bit. 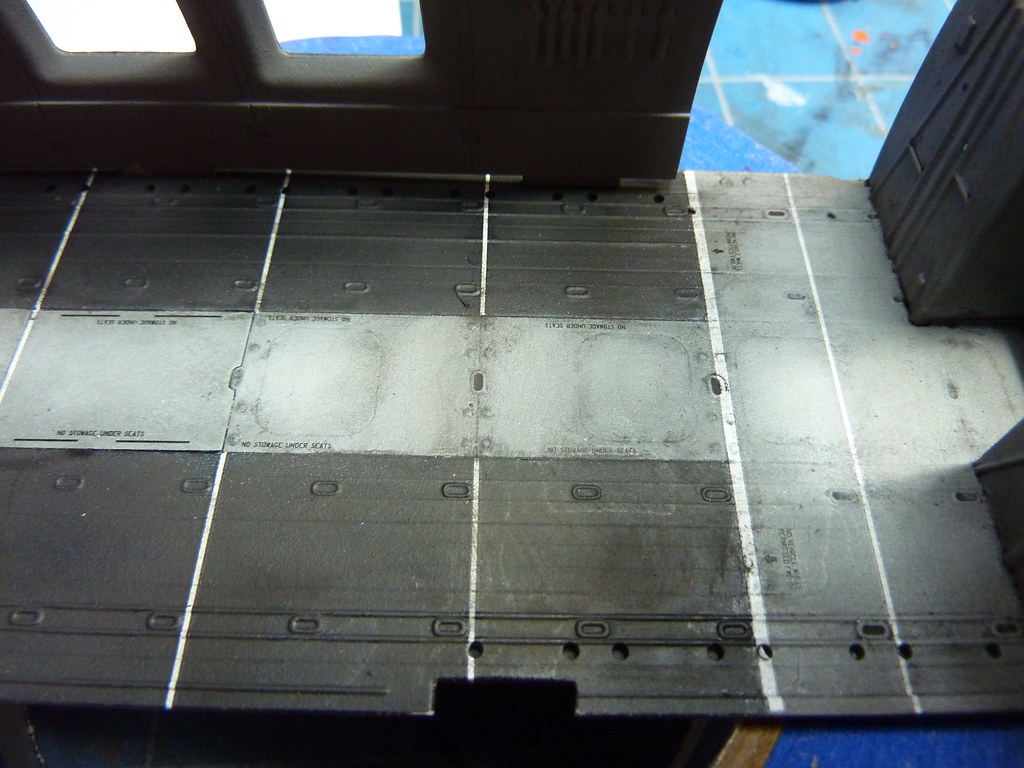 The control console, again probably wrong term, installed, a lot of this detail will be impossible to see once the fuselage is built around it. 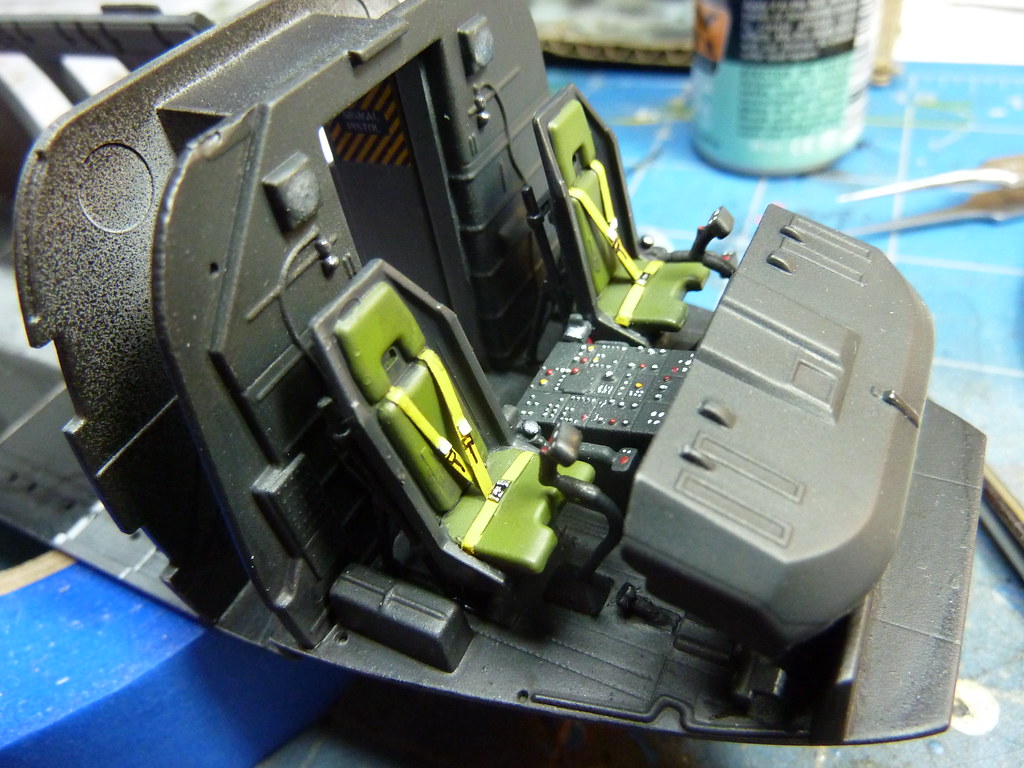 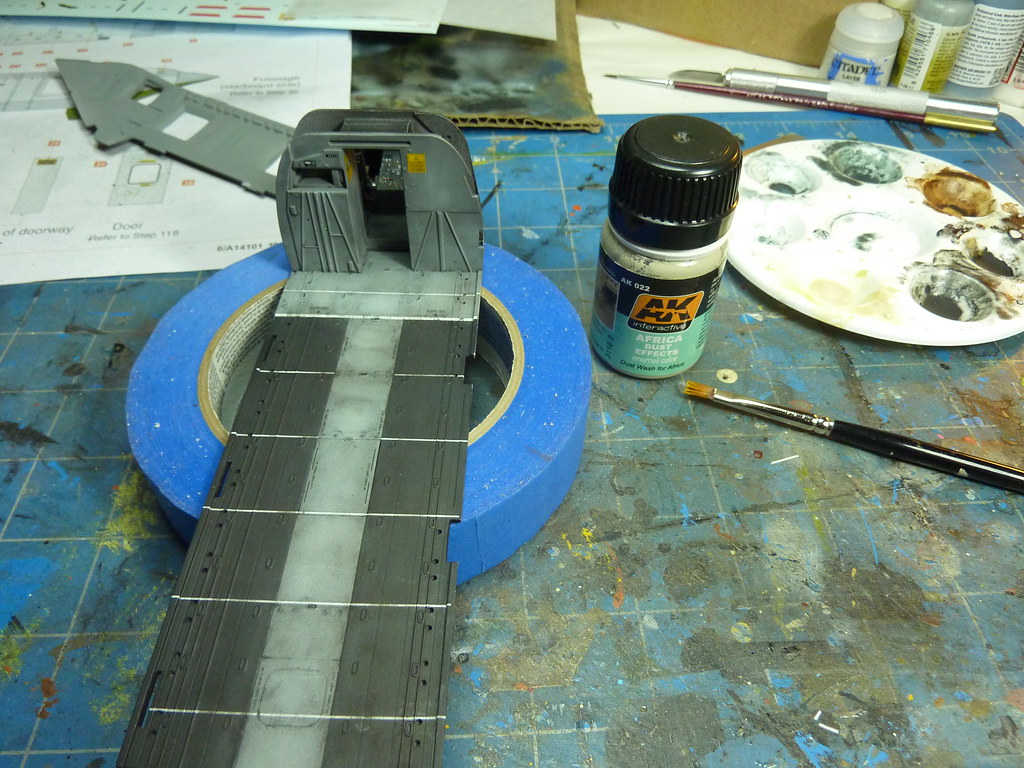 Here's the deck with some dust applied, I wanted it to look like it has been operating in Afghanistan, dusty and used. 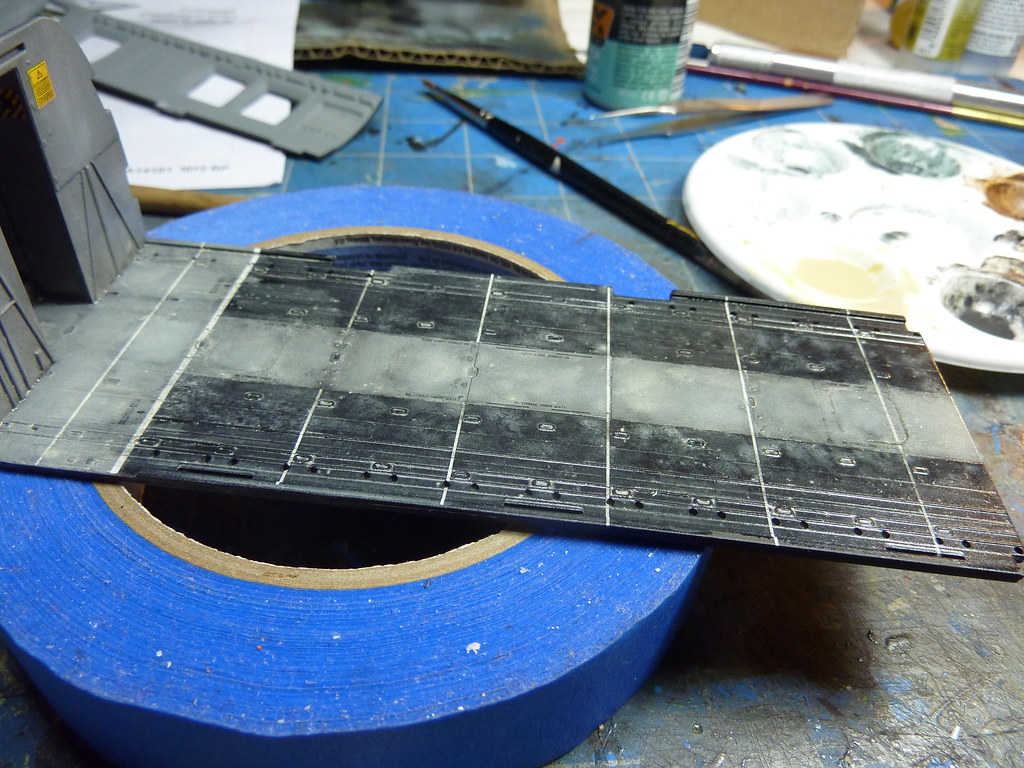 Wet and sloppy, but I know it'll dry nicely! 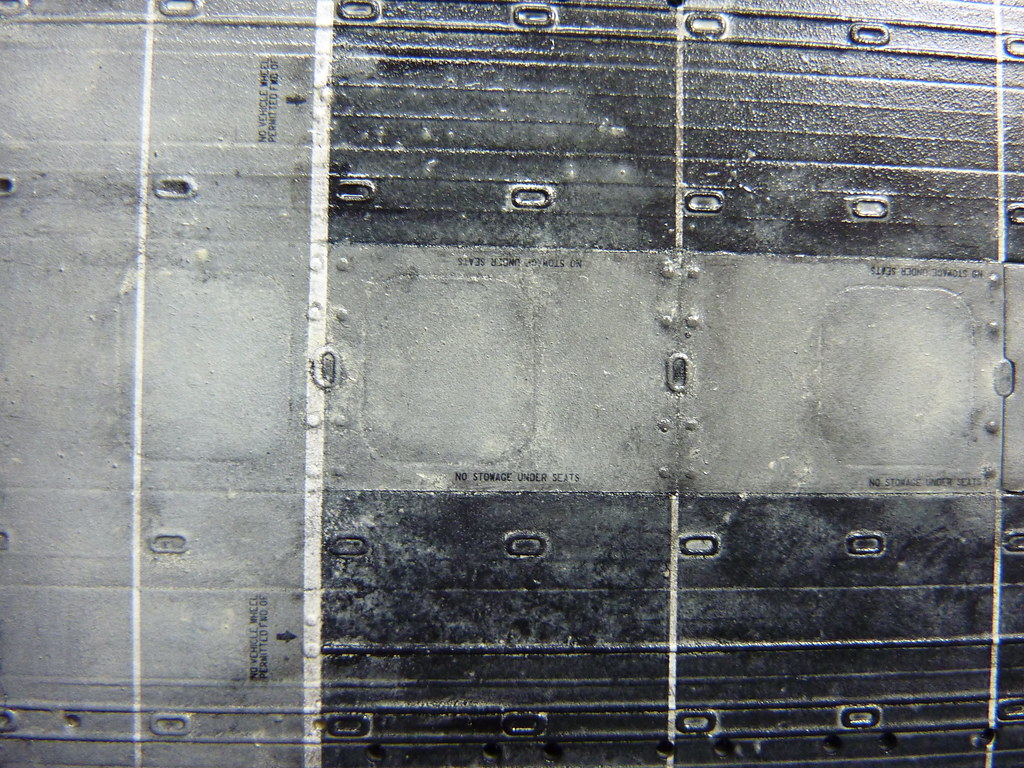 Next step is to paint up the walls and ceiling, which will require some serious masking and airbrushing. Plan on doing that this weekend.

Nice work on this!

This is looking really, really good. That cockpit rocks.

Some nice details there

Thanks guys! I haven't done much lately as I've grown concerned with the paint fumes/dust from airbrushing. I know I've inhaled some paint at this point, and I don't always want to have to wear a respirator.

So I'm building a spray booth. The materials have cost me about a hundred bucks and I'm struggling with the woodworking, but hope to have something functional this weekend. I bought a 90cfm bathroom fan which I hope will be powerful enough. There wasn't anything bigger at the hardware store.

So I've finished my spray booth, it turned out huge, but I wanted some room for working on larger pieces. Woodworking, uhg I just don't have the patience for it. Odd since I build models as a hobby. But woodworking projects always turn out uneven and crappy!

Anyways, I used a 90cfm bathroom fan, and I think it's not quite powerful enough. It's definitely removing fumes and paint dust, though.

So today I masked off the sides and roof and painted them up, still need some touch ups and filtering on them, as well as the decals, will get to that tonight or tomorrow I think.

Currently my airbrushes are giving me lots of strife, PAINT SPLATTER all over the place, trying at 20-30psi. Too low and the spatter really messes things up. I've stripped them and am cleaning them in my ultrasonic.

I think the line around the needle has gotten gummed up, and when I release the trigger is when the paint splatters. Very frustrating. I'm use Badger patriot 105 and Velocity.

If you can't run it. Chrome it!

Looks nice, a lot of detail and love the dust wash too.


THE NEW ONE said:
any photos?
Click to expand...

As a matter of fact, I do have some new pics! I've been slacking off quite a bit lately, playing lots of Mass Effect, great game series.

So, I painted up the interior fuselage and applied decals and a thin wash of windsor and newton oil. I think I'll call it good there as I just want it dirty and used looking, but not Maschinen Krieger levels of weathering. ;D

Let's see if this works...more unwanted changes to flickr, image linking doesn't work the same. Man, I'm really not liking flickr anymore. I'm having to do more work than I used to just to get the URL to post these images. 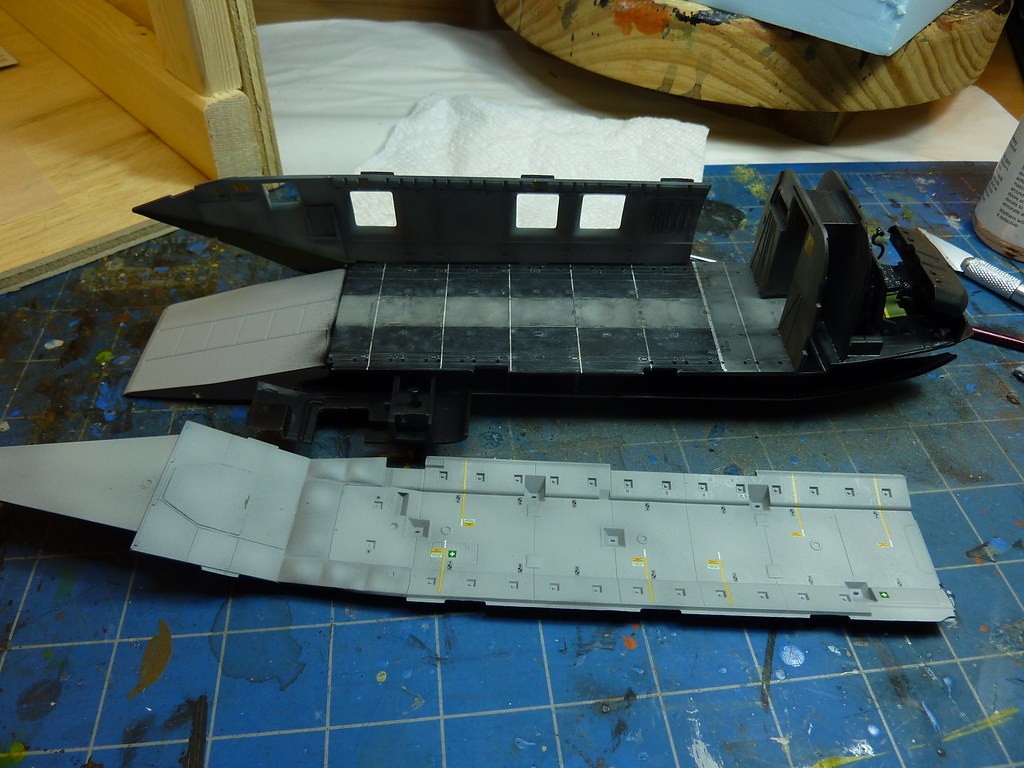 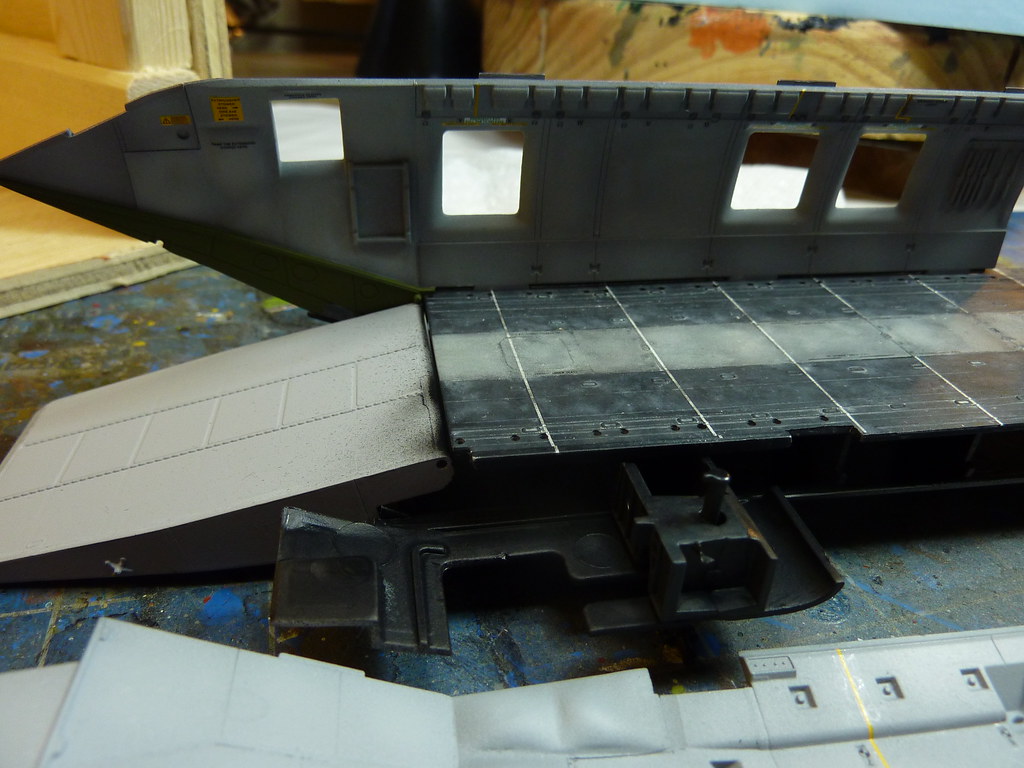 Here's the interior fuselage with decals and weathering applied. I didn't realize the yellow lines on the decals were meant to match up perfectly...quite difficult to do at any rate. No one is really going to see them outside of these pics, so it isn't a big deal. 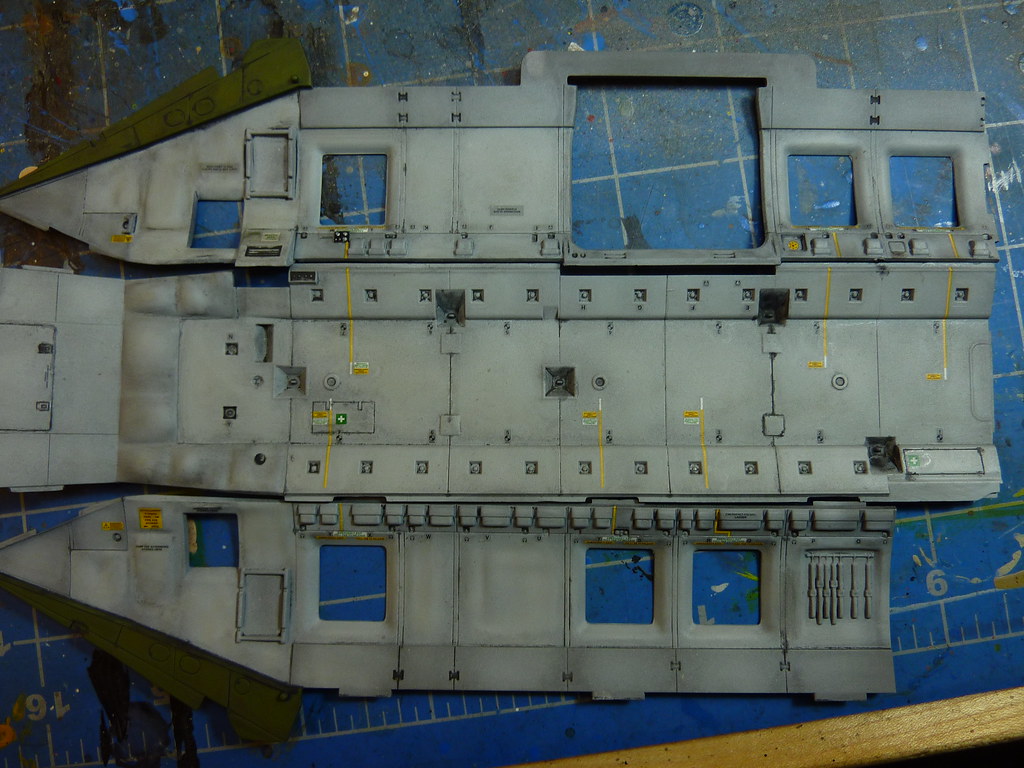 And now with seats glued in. 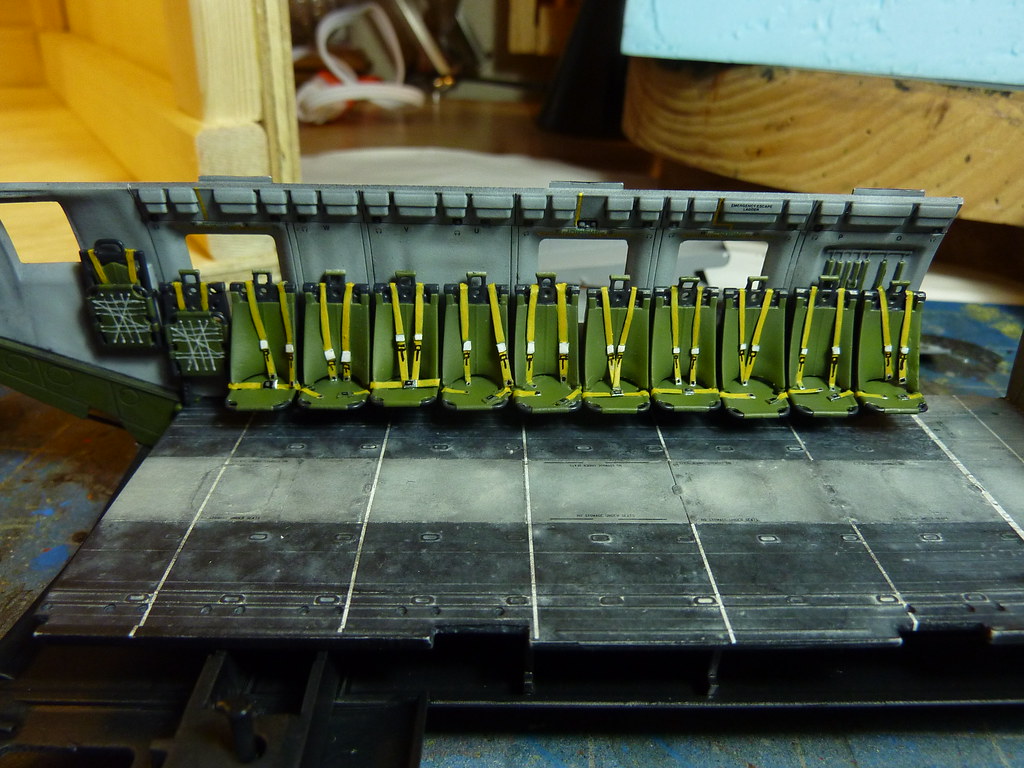 Next up is to paint the ramp, which has to be fully done before the rest of the interior fuselage can be completed.

That last one was the money shot!