:-[ Unfortunately, I've run into delaminating paper problems with the Banshee, and the
B-29 seems impossible to finish, let alone start at this stage. [It seems I'm always a
late competitor in these competitions D:]

So instead, I looked through my paper stash and found this sweet biplane. The Airco DH.6 is an extremely rare modeling subject, so I'll just shed some quick history on it. The DH.6 was primarily used as a trainer by the RFC during WW1. It was also used in some light military actions during WW1 as well.

The kit itself sports 4 pages of model parts and 2 pages of formers - 303 or so model parts. So I figure if I go at a pace of 15 or so parts a day, I'll be able to meet the deadline. But even then, I feel that I'm already going to be building down to the wire!
[This one will be under the Juniors category].

O.K.! So first day of work and some progress to report!

The fuselage is certainly shaping up - nice and straight. There were a few problems with
the formers fitting, but a little trimming here and there made them fit just nicely.

One thing I love most about this model is the wood grain textures!

More on the cockpit tomorrow!

Another nice one ;D Very neat work there fruit .

C'mon ...I want to see this one finished ,love these ole Bipes

Thanks guys! I totally appreciate the support ;D

[Not to worry Chris, this one will surely be completed! In fact, after tomorrow I think I'll need less than a week to finish this one off! ;D]

Ah, a pretty productive day if I do say so myself! The cockpit is basically done, all it needs is a leather pouch, some stuff on the IP, and seats to wrap it up. I won't be completing the cockpit until later since I'm waiting on some stuff to arrive to help me with the last bits.

Alrighty, so tomorrow I'm going to skin the fuselage. The goal is to get the fuselage skins to look more like fabric - so I'm going to be "copying" a technique [which hopefully it doesn't end poorly] from the excellent modeler, Tomek.

Love the progress so far fruit!

Hi fruit nice work on the DH 6 hope you get it finished in time.
There is still a lot of work to do that why I was going two put in my gypsy moth form GPM but I had enough with the three entries I am doing.
Good luck in finishing you're one Alan

Thanks guys, I always appreciate your interest!

Alan, though you won't be entering the Gipsy, do make a build thread on it! I want to see that one built!

Chris, I could not wait either - so I taped it up and called it finished! Really? No, but I did
tape it up. Needless to say, I'm super excited by how this is turning out!

The skins seem to be fitting really nicely. So tomorrow, I plan to get those skins looking more like fabric.

And I was so excited that I had to take a picture of the taped fuselage where the wings will be. I must say, the Skyhook had some massive wings! The model may look clean now, but I'm looking forward to try my official hand at weathering ;D

Tomorrow's update will be much better, I assure you

wow very cool Fruit. the wing span is huge on that sucker

Very nice Fruit ! the fuse looks good ,looking forward to see how you weather it up

Alrighty, so it's not exactly what I wanted to show you guys, but it will suffice. I wanted to wait until I had the entire fuselage skinned, but I got excited again ;D

This update has a lot of pictures - pictures wary!

So this technique is ripped straight from Tomek's Skyhook build - I don't think I've linked to his gorgeous build yet, have I? I highly suggest that you guys take a look here:

First picture shows the strips glued to the fuselage. I marked 5 spaces and glued those suckers in! 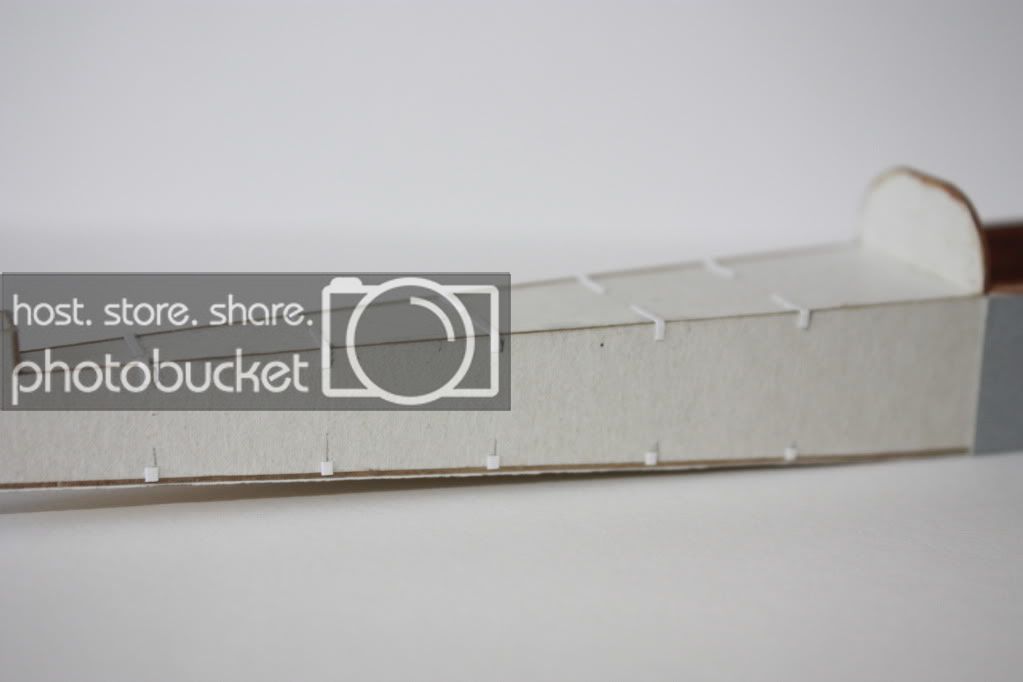 Second picture is just for your guys' viewing reference. Notice the plain appearance of the two pieces - definitely a lot of potential to be had! 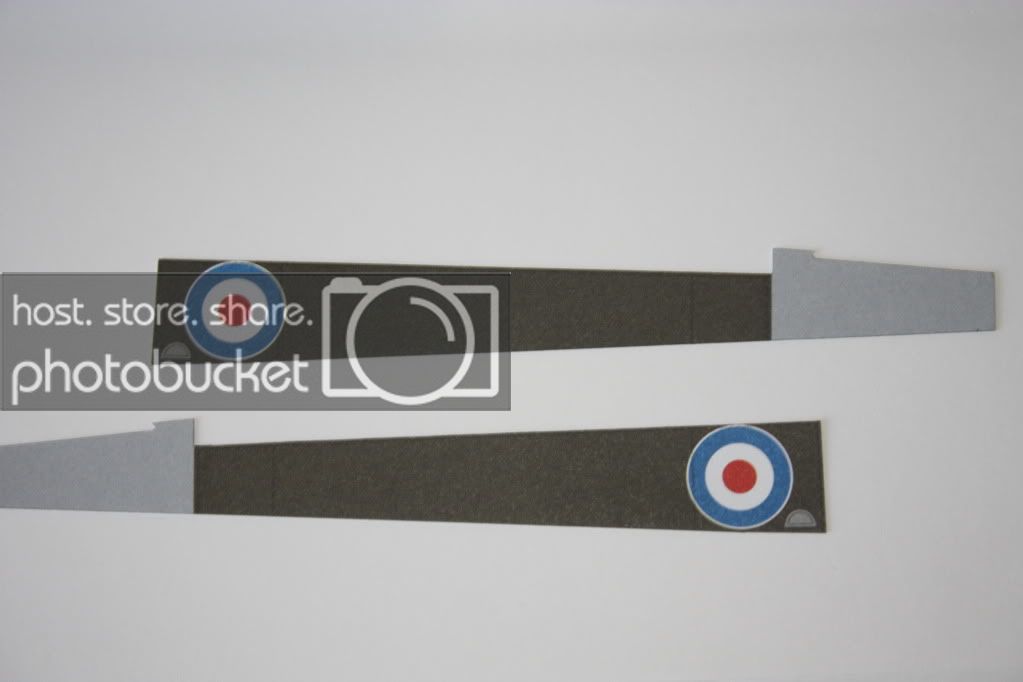 Third picture shows I went about getting the indent effects. I took a small tin cap and filled it with a bit of water. Then I took an old brush, dipped it in the water, and lightly applied the water to the bare side. I found this to be like a preparation stage. 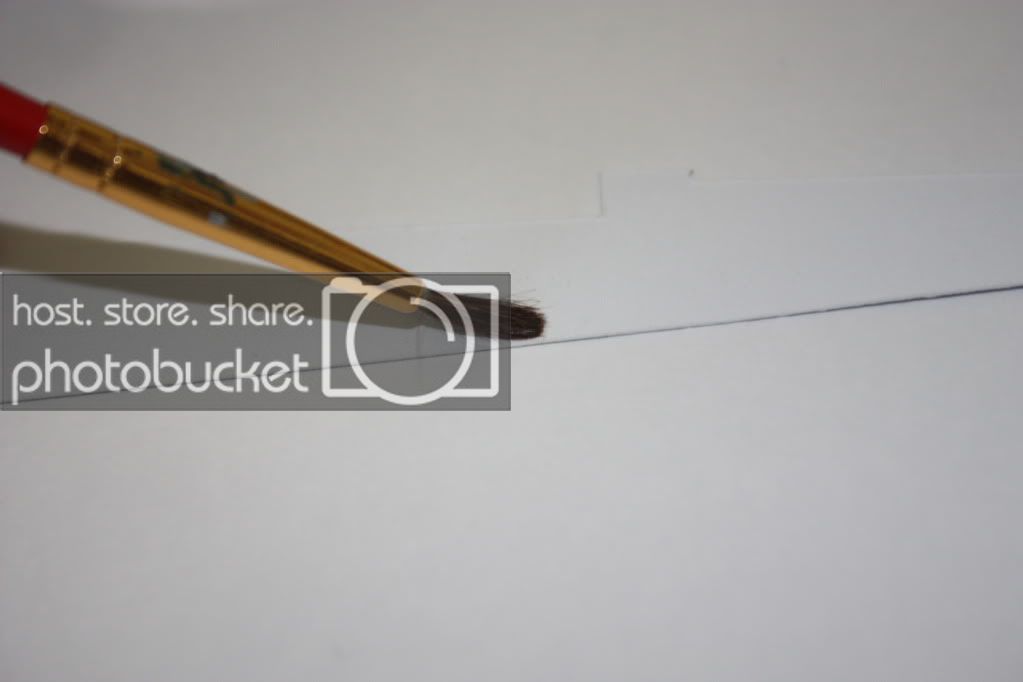 Fourth picture shows what the effect looks like from the back. The paper strips acted sort of like a punch . 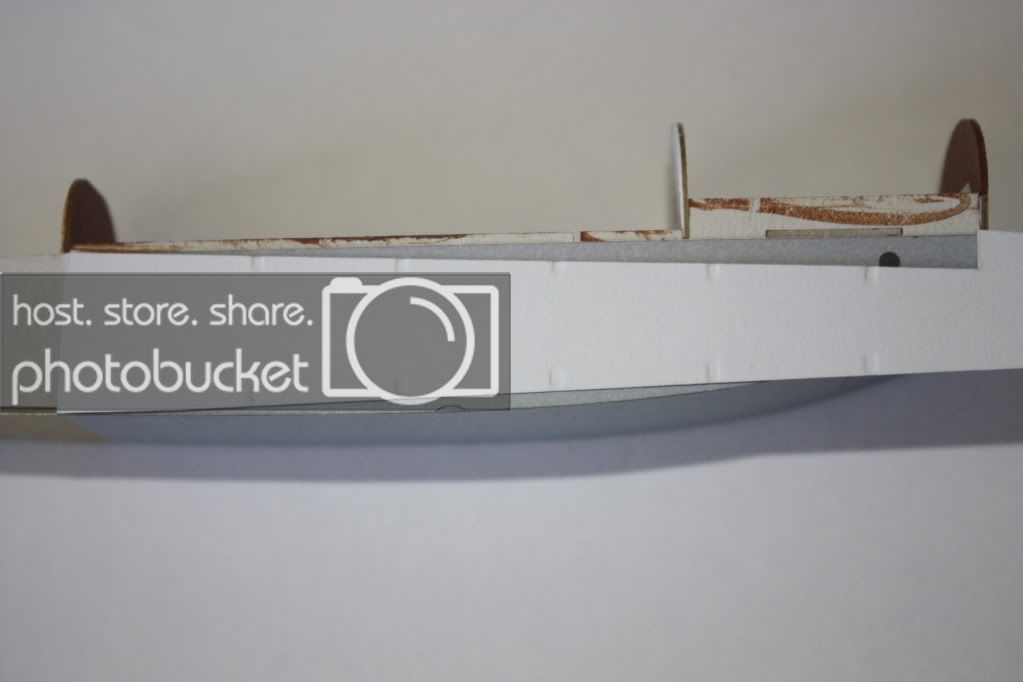 Fifth picture shows what the effect looks like from the print side. I'm satisfied with how it came out! 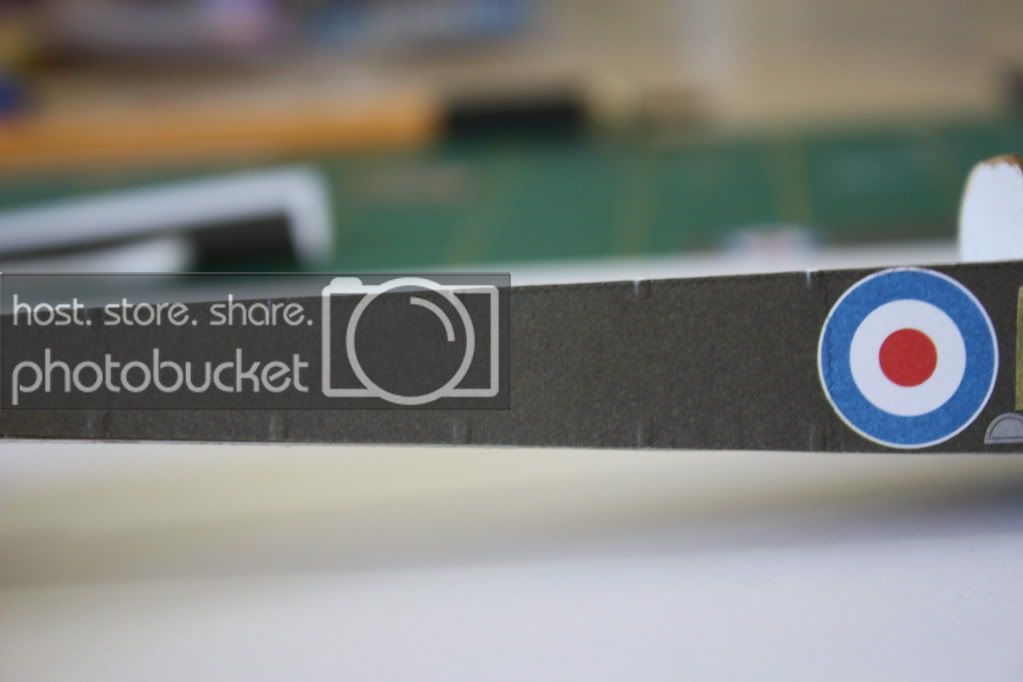 Sixth picture shows the 'fabric' wrinkle effect. I must say that I was most excited by how this area came out ;D

Seventh picture is the fabric wrinkle on the starboard side. I liked the overall effect on this side as well. The wrinkles are in fact very, very subtle. I do admit that in some areas my use of the technique could be improved, but I noticed it after I glued the pieces on 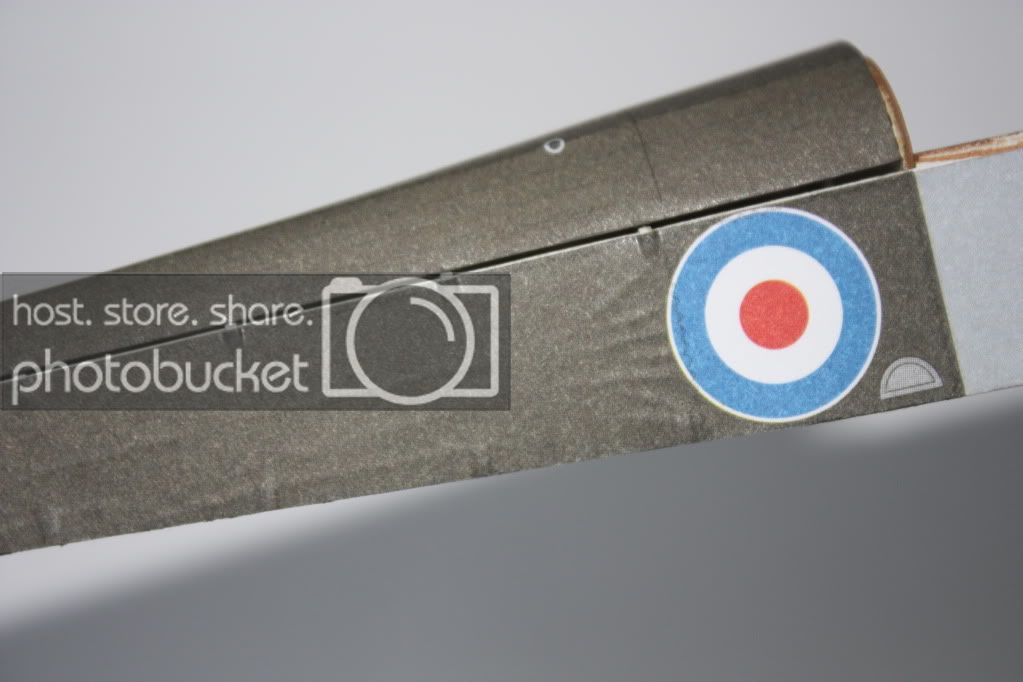 The next few pictures are just me fiddling around with the lighting to show off the wrinkles with more emphasis. Again, the wrinkles are extremely subtle in natural light, and the effect is best seen in picture 6. 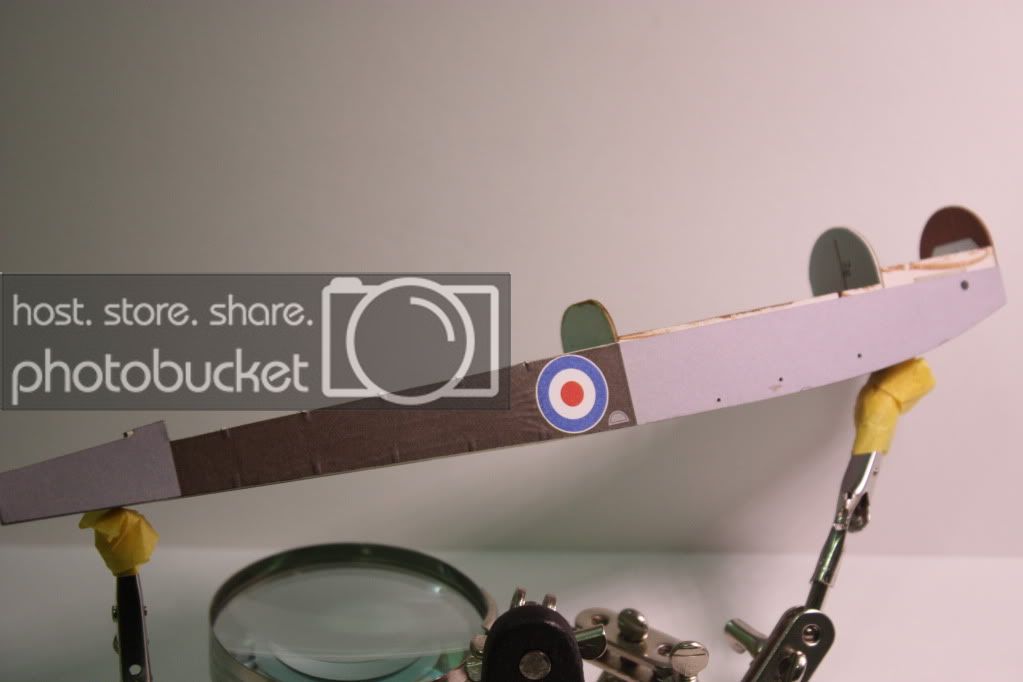 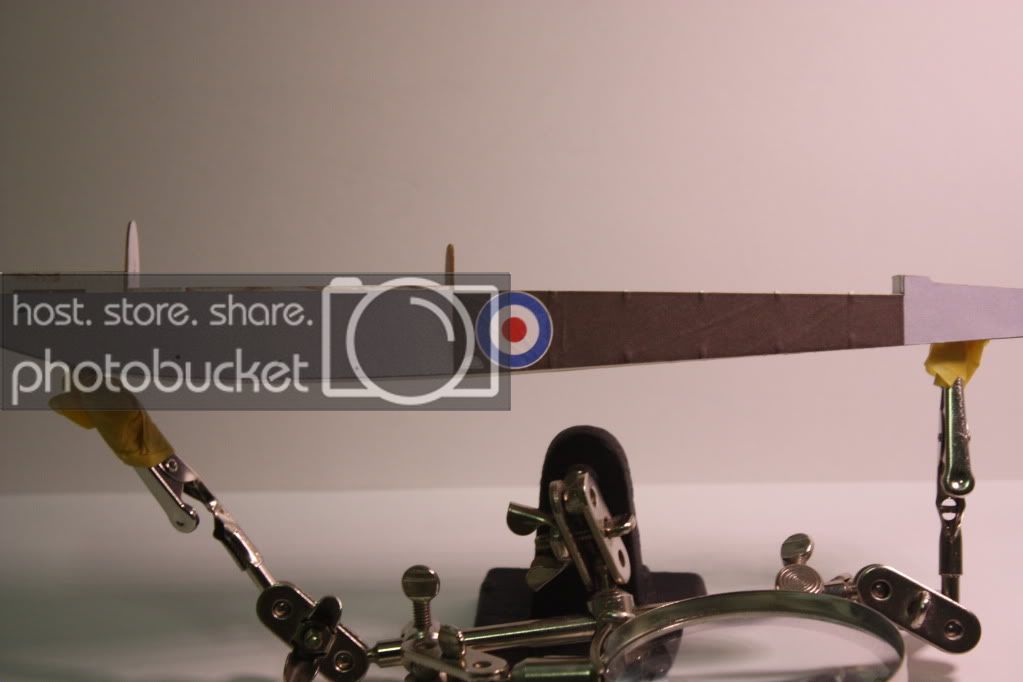 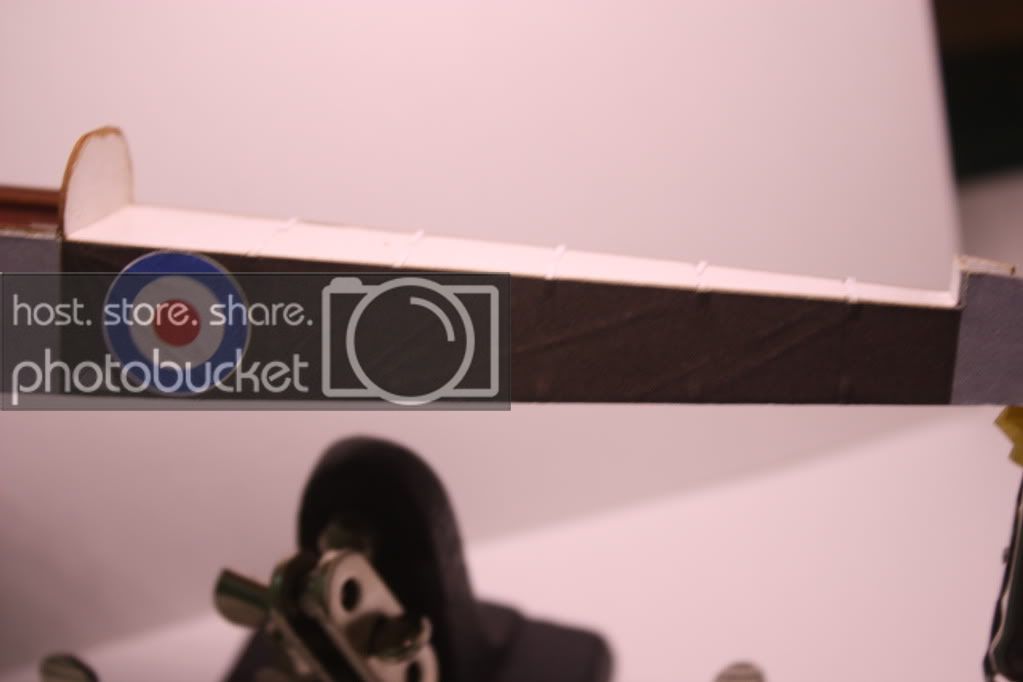 I'm having some minor problems getting the 3 main top areas of the fuselage to fit properly, so I'm going to be doing some light surgery on the model tomorrow

I'm thinking I'll have the fuselage all patched up by Thursday! The wings will be much easier to construct, I'm thinking two days at the most. However, I've never done rigging on a plane before, so I'm hoping it doesn't take too long!

That is looking very good Fruit ,The wrinkles look just fine mate .The linen did sag quite a bit on some of them especially during the summer months with the heat . Im liking this one

Thanks Chris! I'm excited to see how they'll look with a little dust in between them ;D

So my plans have slightly changed, I'm not wrapping up the forward fuselage until next week. I've got some goodies planned in the cockpit area and maybe - if I have a good amount of time left, I'll have something sitting in the cowling

Knowing that I'd be gone tomorrow and the weekend, I decided might as well start/finish these wings spars. This was definitely the most relaxing part of the build, even though at first glance it looks nightmarish. BUT, if you turn your attention to the green, rounded segment of the fuselage - I can tell you with immense confidence that said piece was the devil incarnate. If there was any piece of a model that you thought was frustrating, that green monster is that piece x10. I seriously lost sleep on that part of the fuselage

Alrighty! Onto the pictures then!

Not much to say really - I had a lot of fun putting these spars together. It's a shame that I won't be able to see them once the wings cover them! Ah well, it's good to know that it's there right? ;D 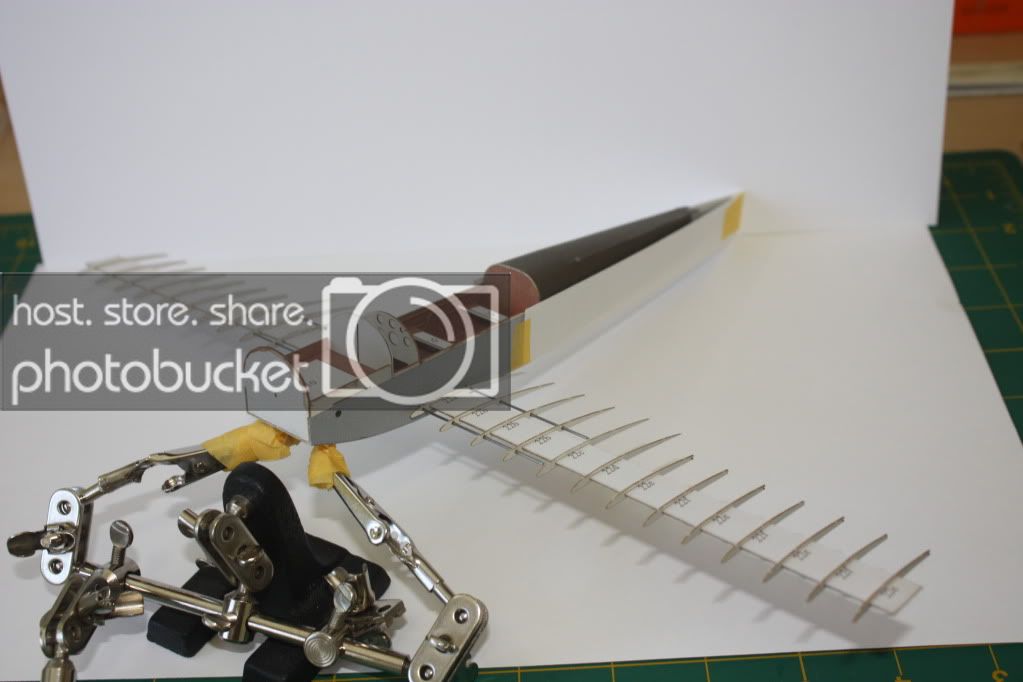 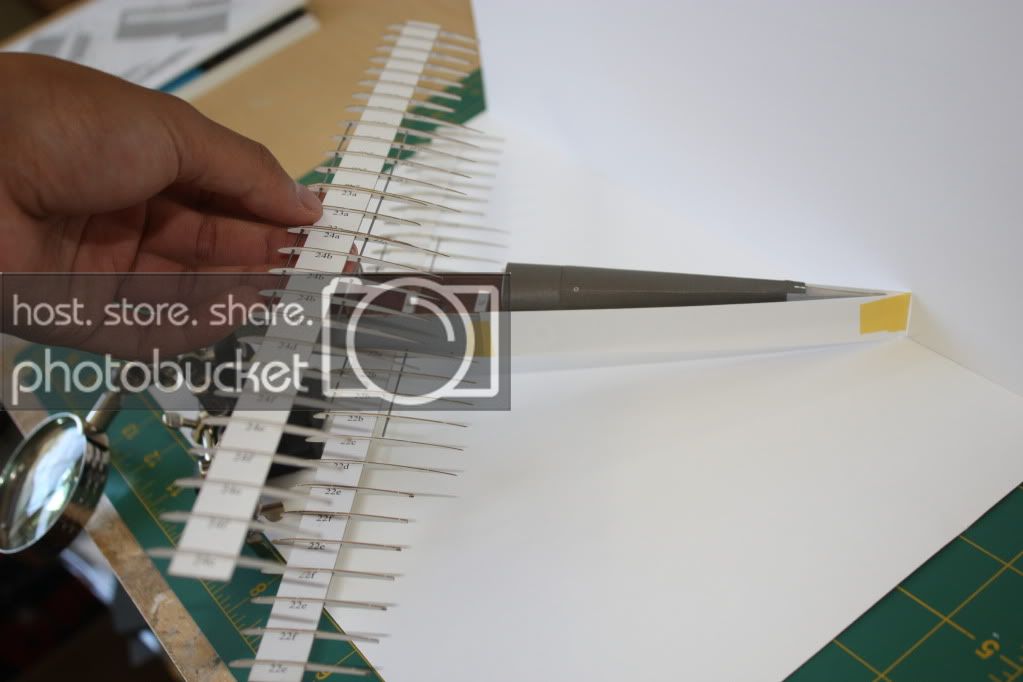 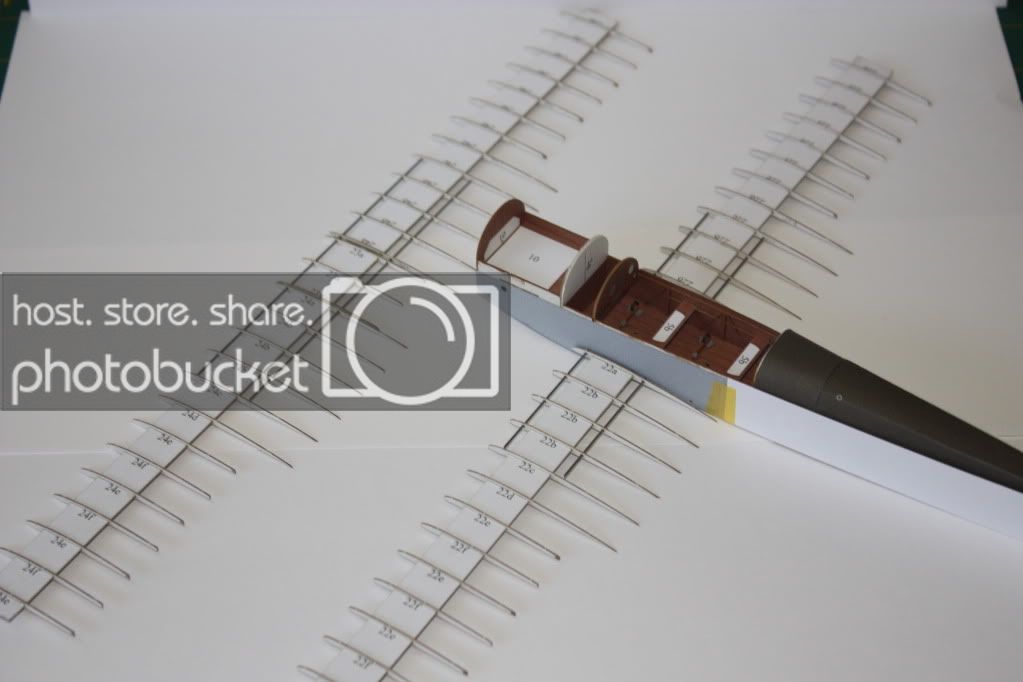 Now what is this treachery! This isn't paper! Why, is that plastic, varnish, and metal - oh my! [Of course, I keed, I keed ;D] 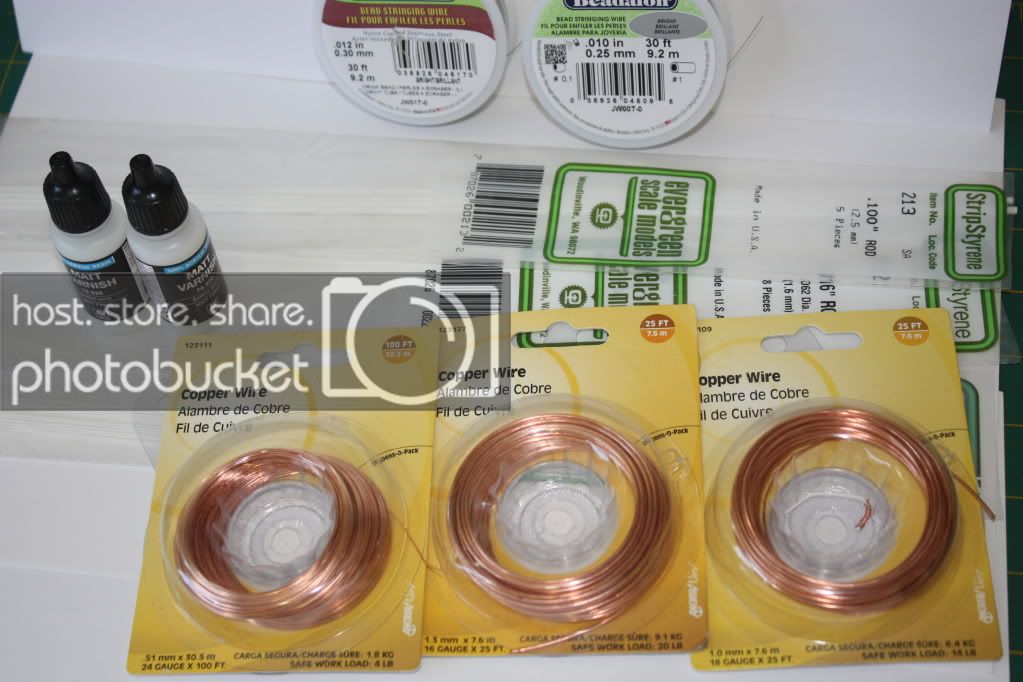 But really, these are going to be instrumental in creating some of the really cool looking stuff on the model.

Anyone want to take a guess on what each one will be used for?

is the cable for rigging?
F

Thanks Spud and Fumbles! I'm not going to lie, it's taken a grand total of almost 100 hours of construction so far, and I started just last week - definitely feeling the modeling fatigue. Thankfully I haven't hit that 'brick wall', you know, where the kit subsequently ends up in the 'started but will finish later but really won't finish later pile'. ???

Yup, the wire is for rigging - but you guys guessed the easy one! I should have blocked that part of the picture out